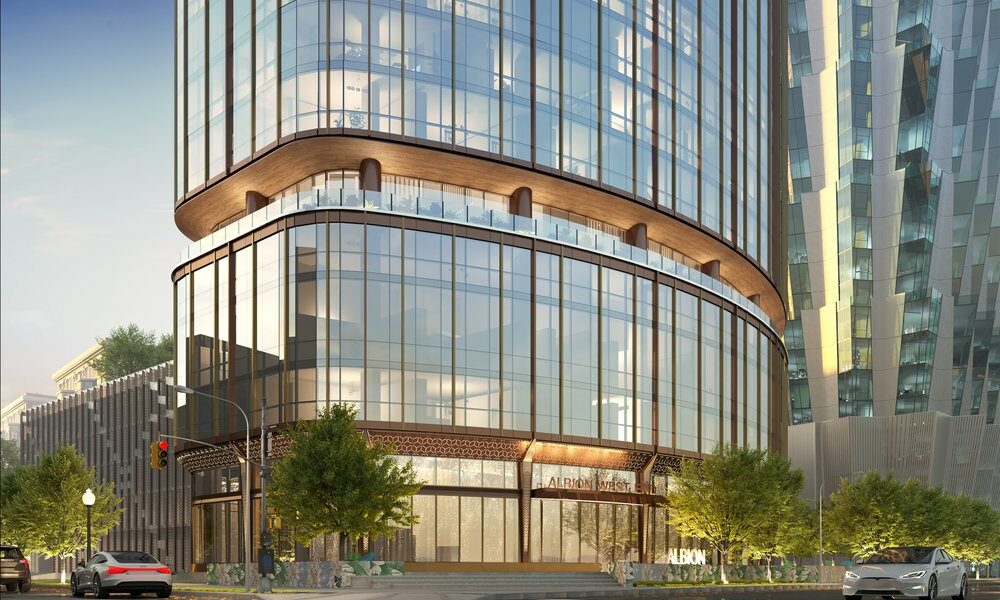 Koplar Properties, Albion Residential, and Hartshorne Plunkard Architecture presented their proposal for a $135M, 30-story, 293-unit luxury apartment building at Lindell and Kingshighway to the community last night at the Chase. They launched a website for the proposal – www.4974lindell.com

Sam Koplar said the family had waited so long to develop the site not due to lack of interest or offers, but for lack of the right plan. Andrew Yule of Albion told the story of visiting St. Louis with his boss scouting a possible project in Clayton that turned out not to be a good fit a year or two ago and driving around. Checking out the Central West End and seeing One Hundred and then the parking lot next door they found the perfect spot. Koplar told how his great grandfather built the Chase which was state-of-the-art built-to-last at the time and will do the same here. Yule said they want to be good neighbors during the planning, construction, and thereafter, so send feedback their way.

There would be 365 car parking spots with 10 electric vehicle charging stations, 154 bike parking spots, and a bike sharing program. 10 EV charging stations sounds low given current trends. The structured parking would be accessed from Lindell and the alley and be 45 feet tall. They also will build a nicer bus stop on Kingshighway.

The 10,000 square foot lobby and 11,000 sf outdoor plaza, which is raised a bit from the sidewalk, would be open to the public. The plaza will feature some local public art.

They expect construction to take 26 months with the last five being solely interior work.

The building would violate the historic district ordinance that calls for a bigger set back from Lindell. The set back on the south side of Lindell is maintained almost all the way to Grand. Some St. Regis residents commented that they want the setback maintained and also brought up the construction headaches while One Hundred went up and would like to avoid them this time.

In regards to tax incentives Sam Koplar said the proposal “needs help” to pencil out and secure financing. They are engaging the city on it. They figure a 400% increase in property tax revenue would work for their numbers. The property tax bill of the current parking lot was $64k in 2021. An increase of 400% would bring that to $320k or about $1100 per unit on average. At One Hundred, which got a 95% tax abatement, the average is $270 per unit; without the abatement it would be about $4,800 per unit. It sounds like the abatement Koplar-Albion are seeking is about 75%. The duration of the tax abatement wasn’t mentioned.

Let the “but for” debate commence. Can’t wealthy tenant pay full freight like the rest of us? If the building doesn’t happen, there’s no new tax base. If it attracts new residents to the city who don’t already work in the city, then there’s earnings tax. Is the abatement going to subsidize structured parking in the region’s most walkable neighborhood that drivers aren’t willing to pay for? Is it worth it? The abatement would end at some point while our obligation to provide it infrastructure is perpetual. Since this is infill, the city doesn’t have to build new infrastructure- a subsidy common to greenfield development on the edges of the region which turns into a forever liability that may or may not be made up for by the productivity of the new development.

Incentives mean they will be required to utilize MBE (Minority-Owned) & WBE (Woman-Owned) contract work. They say that will total $37M. They will also use union labor, 450 jobs.

The numbers may look good for the city- give up some property taxes in the short term to make the project happen or be more productive over the whole life of the building than without the abatement, plus some additional earnings, sales, and utility taxes from the new residents straight away, but a majority of property taxes goes to the St. Louis Public Schools. Yule said there would be almost no children living in the building so there wouldn’t be a “burden” on the school district. We’ve heard this concern in suburban school districts when apartments are proposed. Opposition worries that transient people with kids will move into the apartments, enroll them in the public schools and burden the school district since they aren’t paying the sort of property taxes that proper single-family home-owners would. It came up in the defunct Crestwood Mall redevelopment proposal that included 225 apartments. While Yule is right that there will probably be very few children living in this building, I’d wager if someone living in this building enrolled their child in the SLPS, they would be welcomed.

They plan to hold another community meeting in April. Stay tuned!