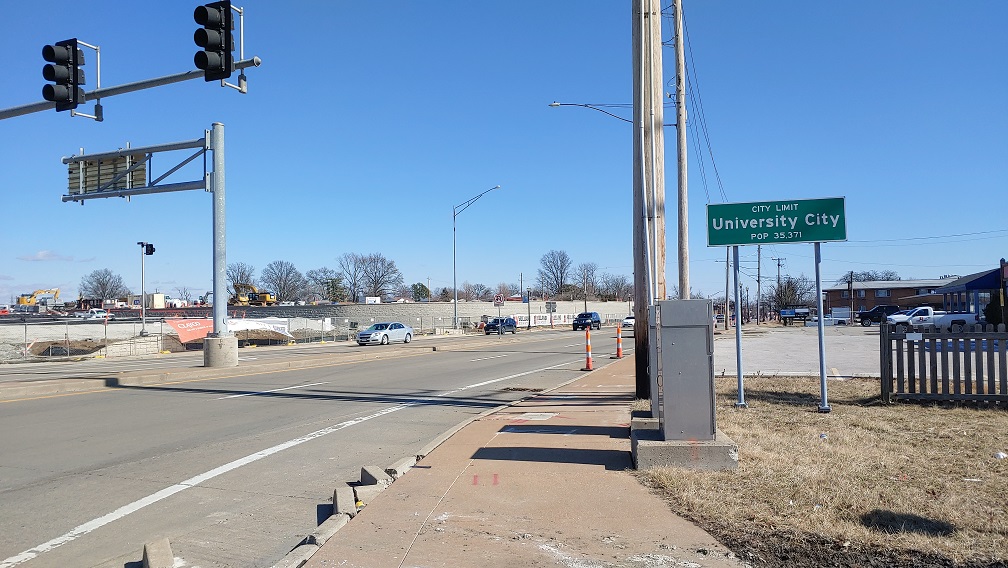 Is it a wall for a prison? Or a fortress? A wall to keep out the Others? No it’s a retaining wall for the Market at Olive anchored by CostCo that welcomes visitors to University City on Olive Blvd. We knew from the rendering it would be bad, but seeing it in real life is a shock to the system.

Below is the aspiration outlined in University City’s RFP for the site. While certainly transformative, whether it leads to vibrancy and how it impacts the image of University City to someone entering it depends on how you define vibrancy and positive impact. At an auto-scale it will likely achieve this. Highly visible from the highway, the hope is that it will attract non-resident shoppers to pay sales taxes and leave. Taking a page from RichBrentMaple to the south and others across the region engaging in the TIF Wars, University City is attempting to leverage fragmentation to shift taxable sales from elsewhere to fund itself through non-resident shoppers. So seductive are the sales tax revenues that the city is willing to forgo all the new property taxes and half the sales taxes for up to 23 years through the TIF to get it. What will big-box shopping look like in 23 years? What will this development look like in 23 years? How adaptable are development patterns like this?

The City of University City, Missouri (the “City) is soliciting proposals from interested parties to redevelop a multi-parcel acre site (the “Site”) into a vibrant and transformative development. The Site is in the northwestern portion of the City on the east side of the interchange of Olive Boulevard and Interstate I-170. As a major entryway to the City, the Site and area significantly impact the City’s image and represent a critical redevelopment opportunity. It is comprised of numerous parcels under private ownership. The City’s intent in issuing this Request for Proposals (“RFP”) is to encourage retail and/or office, hospitality and residential development of the Site and help stimulate the overall redevelopment of the Olive Boulevard corridor and adjacent residential areas.

Redevelopment of the Site will demonstrate the highest quality design and architecture; include a thoughtful and balance mix of uses that create a regional destination and serve local needs; incorporate unique signage, art or other amenities that signify the area as entry to the City; and be consistent with community standards and goals.

Request for Redevelopment Proposals
I-170 and Olive Boulevard Area 2018

East-West Gateway couldn’t be more clear that the TIF Wars have been a determent to the region.

Focusing development incentives on expanding retail sales is a losing economic development strategy for the region.

East-West Gateway – An Assessment of the Effectiveness and Fiscal Impacts of the Use of Development Incentives in the St. Louis Region

At a human scale, it fails miserably. There is nothing of interest to someone walking along Olive. The voluminous and dangerous traffic on Olive combined with a sidewalk next to a travel lane on one side and The Wall on the other makes for a non-place quite hostile to pedestrians. Cycling on Olive is much too dangerous. There is no indication to drivers exiting the highway that they are entering a street in a city, rather they are switching to a slightly less high volume and fast highway. It bears no resemblance to the vision expressed by the community in the RFP.

It should be more than just a transportation channel; it should be a practical destination corridor, with regionally and locally attractive nodes

It should contain a variety of uses and different character areas

It should be a multi-modal transportation corridor that is safe, efficient, and well-connected for all users regardless of age or ability

University City is desperate for revenue. Its streets are falling apart and the police headquarters have been in a temporary building for years. It can raise taxes, cut services and infrastructure, or increase land productivity. Our region offers a fourth option thanks to fragmentation- shifting taxable sales from elsewhere in the region, the more expedient and politically-viable path. The reasons for U City’s funding woes are partly its fault and partly due to forces beyond its control. The federal, state, and regional governments’ unabating efforts to spread out the region lead to a constant undertow undermining places like University City. This perturbs the market undercutting the sustainable path- higher productivity land uses.

Though where higher land productivity is viable under current conditions, University City has passed on opportunities and in the Parkview Gardens neighborhood plan chose city-subsidized surface parking over potential development on the lots north of the Loop. They also have an onerous parking minimum of one spot per bedroom.

The Market at Olive is a symptom of a problem (several really), not a treatment. Other parts of the region should take heed, despite University City having higher land productivity than many newer and more auto-oriented places in the region, it is still falling short of keeping up with its long-term infrastructure liabilities. This does not bode well for other areas distracted by the illusion of wealth with lower land productivity as they age and their liabilities come home to roost.