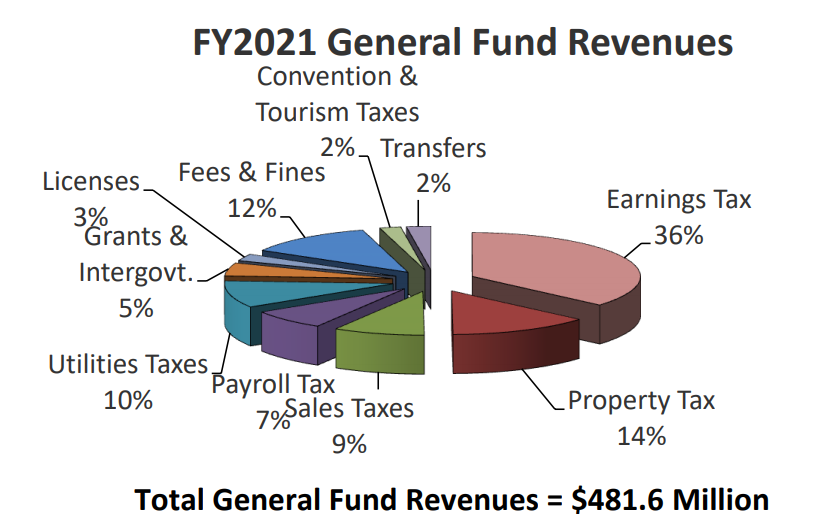 Once again the earnings tax will be on the ballot. Under a Missouri state statute passed by voters in 2010, new earnings taxes are not permitted and those that exist in Kansas City and St. Louis come up for a vote every five years. A yes vote means keep the 1% earnings tax for another five years. A no vote means it decreases by 0.1% each year until it’s gone. in 2011 it passed with 87.54% of the vote, and in 2016 is passed with 72.3%, despite a multimillion dollar campaign against.

The earnings tax is under constraint threat by the Missouri Legislature. Bills are filed every year to get rid of or modify it. This year is no exception. HB688 files by Rep. Jim Murphy of south St. Louis County would make it clear a nonresident who was telecommuting to work would not be subject to the tax. HB1294 filed by Rep Shamed Dogan of St. Louis County would relieve nonresidents of the earnings tax if they worked remotely for at least 100 days in a year. HB705 filed by Rep. Michael Davis of Kansas City would prohibit imposing an earnings tax on nonresidents. One wonders if we’d ever see the same idea applied to sales taxes.

The earnings tax generates 36% of the city’s general revenue. It’s been much more stable than the volatile sales tax. And while it doesn’t apply to income generated through capital gains, it is till less regressive than sales or property taxes. After all you don’t pay the earnings tax unless you’re earning something while you’re paying sales taxes when you buy something and property taxes if you own or through your rent even if you aren’t earning wages.

Taxable sales and use are down about 12 % since 2000. The Missouri Department of Revenue hasn’t posted taxable sale for the 4th quarter of 2020. The first three quarters were down 14.3% from the same period in 2019. People dial back their spending in tough times, delaying spending, substituting cheaper products, some of it never to be spent later, like buying groceries for meals instead of eating out. In other words sales taxes are fragile, don’t rely too much on them!

Meanwhile earnings tax receipts have been more stable. Recipes were on a nice run since the Great Recession– up 17% 2010-2019.

Nextstl – The Non-Profit Paradox. 40% of Real Estate in St. Louis is Government Owned or Tax Exempt

Many jobs in the city are with employers that are tax exempt. Like WUSTL, BJC, SSM, SLU, the state government, the USPS, the Federal Government, numerous non-profits, religious institutions, Bi-State, etc. They don’t pay sales or property taxes. And numerous developments are property tax abated and TIF’d. The people living or working in these places are subject to the earnings tax which helps pay for the infrastructure and services they use.

If the earnings tax were to go away what would we do? Cut spending? Services and infrastructure are already below people’s needs. and expectations. There may be some waste, but not $175M. Modernization to raise city employees’ productivity so we would get more out of each tax dollar would help, but that takes money too.

Raise taxes, enact new taxes? If the property (about $1.3 per $100 assessed), sales (1.375%), and utilities (10% for commercial customers, 4% residential for electricity and natural gas, 7.5% on telecom) taxes were doubled that would make up for the earnings tax. The earnings tax is cited as a deterrent to economic growth since the city has it and the rest of the region doesn’t, and taxes on income are the worst because of reasons. Wouldn’t doubled property, sales, and utilities taxes be a deterrent as well? The state probably doesn’t allow tax rates that high.

Write more tickets to get more revenue from fines and fees? That become a popular funding source for St. Louis County municipalities especially after sales tax revenues were devastated by the Great Recession. The effort ruined many people’s lives, throwing people into a hamster wheel they couldn’t get out of with piling fines and fees.

More tax base is the third option to cutting services and infrastructure or raising taxes. I’ve encouraged high-productivity land uses over low-productivity auto-oriented ones time and time again. Part of our woes are due to spreading ourselves thin by spreading out the region so much. We’re each on the hook for more and more. Taxes discourages development, but it’s a double-edged sword as poor infrastructure and services does as well.

The earnings tax should be retained. Getting rid of it just doesn’t make sense.