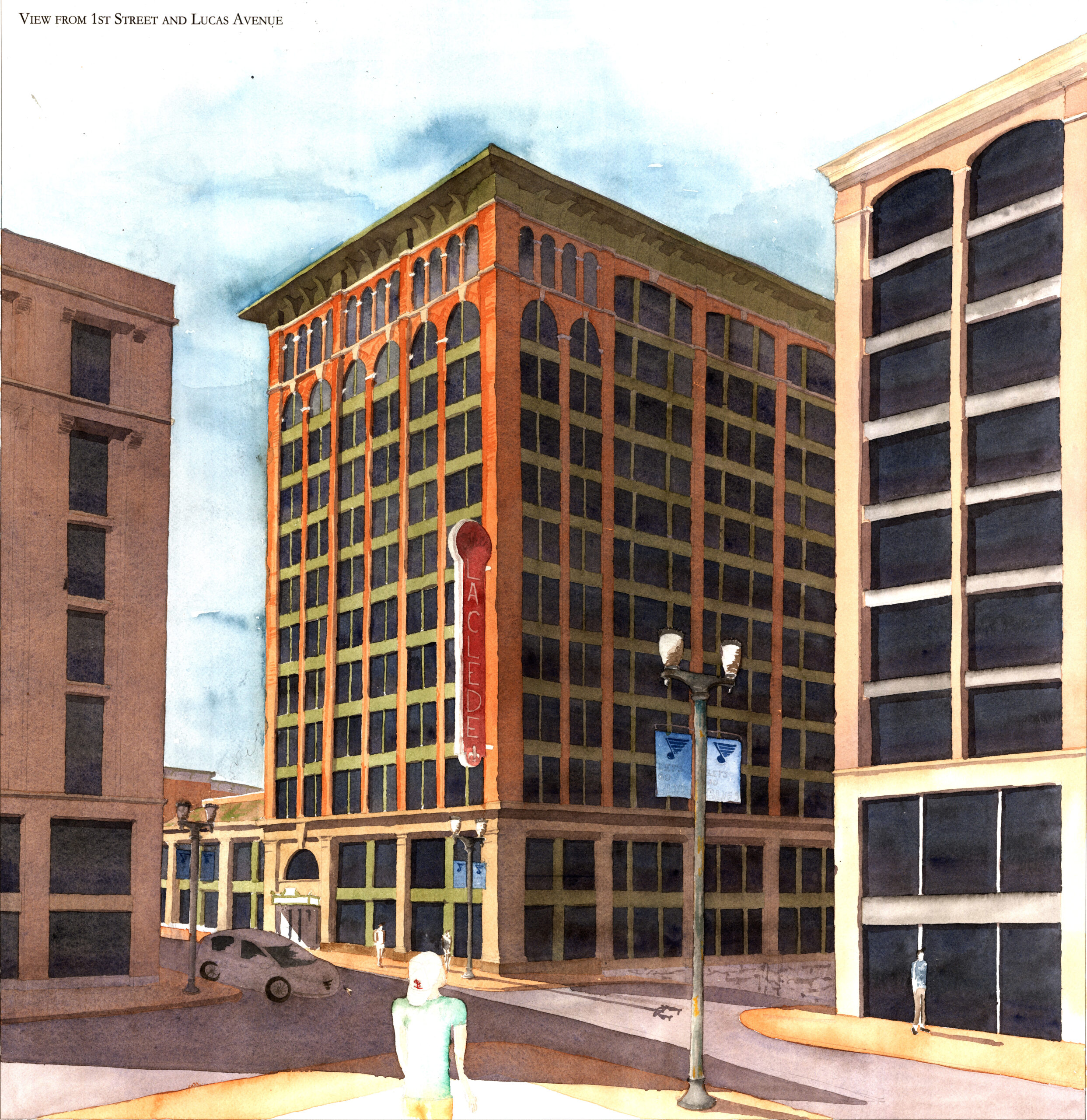 St. Louis’s most historic neighborhood needs a major facelift. Much like the rest of downtown, it has everything any trendy neighborhood could need: nicely scaled, walkable streets, historic buildings flowing with character, and a close proximity to the monuments and features that define our great city. What’s missing? People to take advantage of it. The hum and buzz of an active city street. The feeling of security and the sense of place. In its current state, it feels so forgotten and underutilized. A neighborhood with this much potential deserves better, so for my thesis project in architecture school, I elected to study this neighborhood and propose a solution to this problem.

In order to establish a successful neighborhood, you must first provide an economy at the neighborhood scale that is self-sustaining. The most basic component of this, and what the Landing lacks, is a population that resides in the neighborhood. For my thesis project, I proposed “The Laclede”: a 13 story, mixed use apartment tower of about 60 apartments combined with a small live music hall. The building is located at the intersection of 1st Street and Lucas Avenue, and would replace a parking lot. This kind of urban infill will not only fulfill the need of a resident base for the neighborhood, but also provide it with a vibrancy that it hasn’t had in decades. The influx of new residents into the area will stimulate its economy, and the live music hall will create an exciting attraction that will support the existing restaurants and businesses year round.

The architecture of the Laclede is influenced by the many traditional buildings found around downtown St. Louis, which is architecture that’s compatible with the Landing’s signature Victorian style buildings. When designing in an environment with a historic significance such as the Landing’s, designers must be extremely sensitive to the existing context in order to create an urban fabric that is cohesive and sensible. The Laclede implements red brick on the tower portion of the building, and a limestone-clad podium that encapsulates the music hall and the street-level functions of the building.

The design uses a system of large storefront windows at the base, ideal for hosting retail and other street-activating functions. The use of piers that express pilasters in the classical Doric order complete the look and organize the façade into vertical bays, which are then carried through the red brick all the way to the top. Decorative spandrel panels break up the windows at the floors, and the building is capped with a large, brake metal cornice. Buildings like this are suitable to loft apartments, which have made the downtown area so popular already. Why not have more of the same in the Landing?

The music hall occupies the northern portion of the site, and steps down in massing in order to provide a smooth transition to the existing building next door. After getting dinner at one of the existing restaurants in the neighborhood, patrons of the music hall would enjoy a spacious lower level standing area that can house 500 occupants, or a balcony level that seats 140. A large bar at the rear of the music hall would keep the drinks flowing and the good times going. The walls around the music hall are thickened to allow for sound breaking technology which will isolate the music hall structure from the apartment tower structure, thus minimizing the amount of noise that will infiltrate into the residential portion of the building.

Finally, to round out the design, the plans allow for a corner café, which will activate the street corner. Street corners are an important aspect of any architectural design, as this is where the most public interaction occurs. Having an active corner at Lucas Avenue and 1st Street would help liven up the Landing and provide a natural center for the neighborhood.

With so many parking lots and empty lots plaguing the urban character of the city, St. Louis has plenty of work to do. Taking advantage of a historic neighborhood and its features has never been more popular in American urbanism, and yet, the Landing sits nearly empty. With development like the Laclede, it is possible to revive the neighborhood and provide a strong anchor for future investment. Maybe it’s time for St. Louis to cash in on what could be its most valuable asset.

Cole is a 2019 graduate of the University of Notre Dame architecture school. He grew up in the St. Louis region and has an affinity for the city and its architectural and urban history. Now working in the Washington DC area, he works for an architecture firm that designs mixed use, multifamily residential buildings. He hopes to return to St. Louis in the future to continue his career in architecture and, through thoughtful design, help guide the city to reach its full potential.