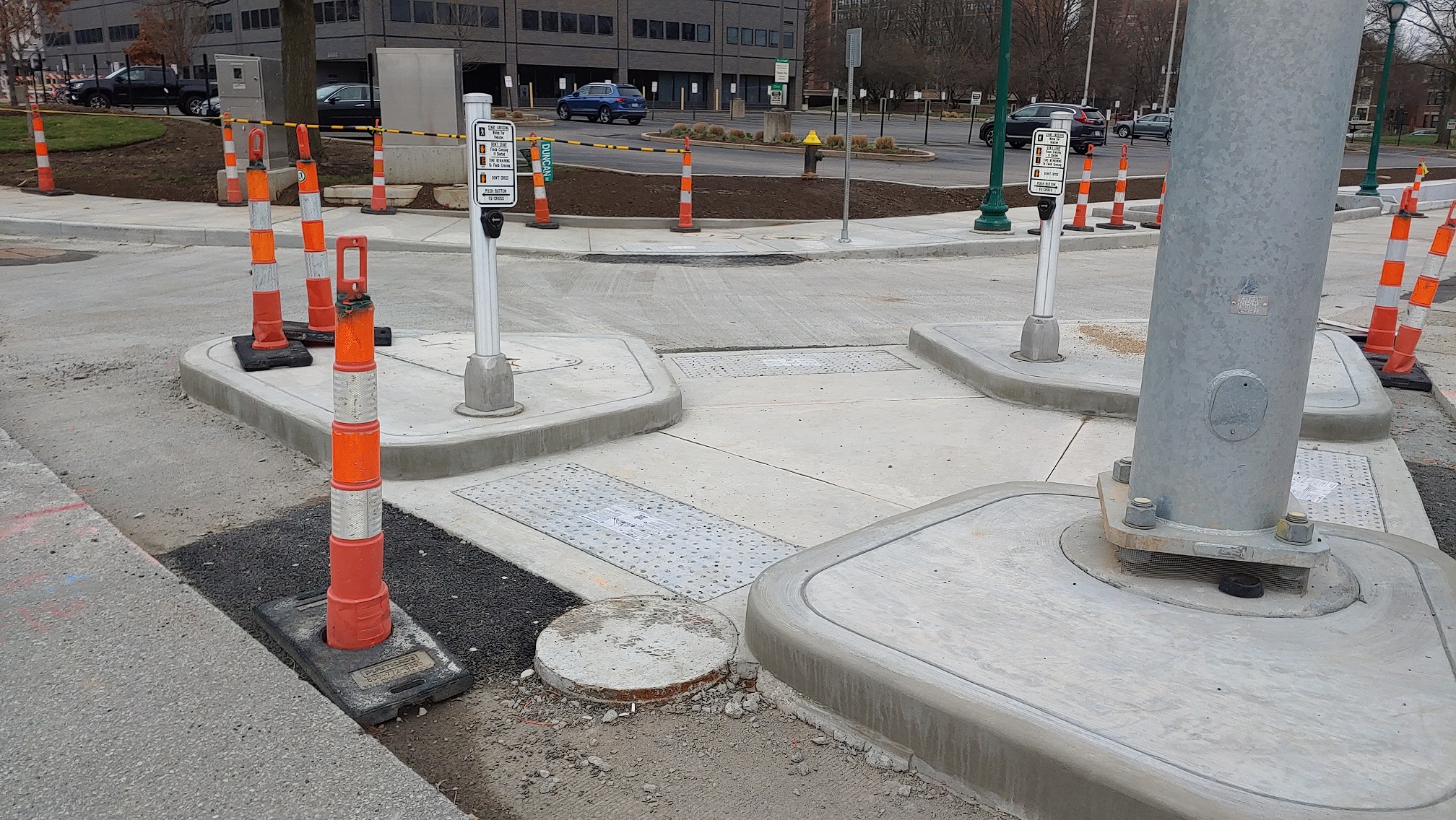 Streetscape changes for Newstead between Clayton and Forest Park Avenue to serve the burgeoning Cortex District and the WUSTL Neuroscience Building have been underway since early last year.

Let’s take a look starting at Clayton and head north.

“Improve alignment and throughput circulation [for cars] at the intersection of Duncan Ave. and Newstead Avenue” should set off alarm bells as it usually means prioritizing speed and volume at the expense of safety.

Slip lanes increase the distance that people have to cover to cross a street, put people into spots that are often the hardest for drivers to see, and encourage drivers not to slow down when approaching an intersection and a crosswalk—the precise moment they should be the most careful.

You may have noticed I used the word changes instead of improvements. It’s clear effort and money has been expended with the goal to improve the streetscape for pedestrians and drivers. But can you do both? More space for cars begets more cars which begets more danger, pollution, noise, parking lots and garages, etc, in other words anti-CITY. The addition of the missing sidewalk on the east side of Newstead is great. New signaling is great. Newstead is wide now, no 12 foot lanes thankfully, but wide. Is it going to be a traffic sewer that becomes a barrier?

Whenever I walk astound Cortex it elicits uneasiness. I’ve described Cortex in the past as a suburban office park on a street grid. That’s probably too harsh; they’re definitely trying hard not to be that. The newness, the setbacks, the green ooze, the lack of mature trees, the blank walls, the coarse-grained development pattern, the fences, the parking lots and garages, the curb cuts, the slip lanes, the Metrolink station is kind of in the middle of nowhere, not sure if it’s any one thing, but all the things. Everything seems far away. When you cross Forest Park Avenue it’s very clear you’re in a different place. With the demolitions on 4300 Forest Park Ave the contrast will be even more stark. I can’t quite put my finger on it.

There’s more coming to Cortex which may help.

Duncan between Newstead and Sarah is shaping up with WUSTL Neuroscience under construction, the apartment building at 4343 Duncan and Boyle, and the currently stalled “Sandcrawler” building at 4210 Duncan at Sarah.

Then there’s Koman’s plans for Clayton at Sarah which would help aid the connection to FPSE.

And there’s a plan for the northwest side of Clayton and Sarah.

Have a look around if you haven’t been to Cortex in a while.