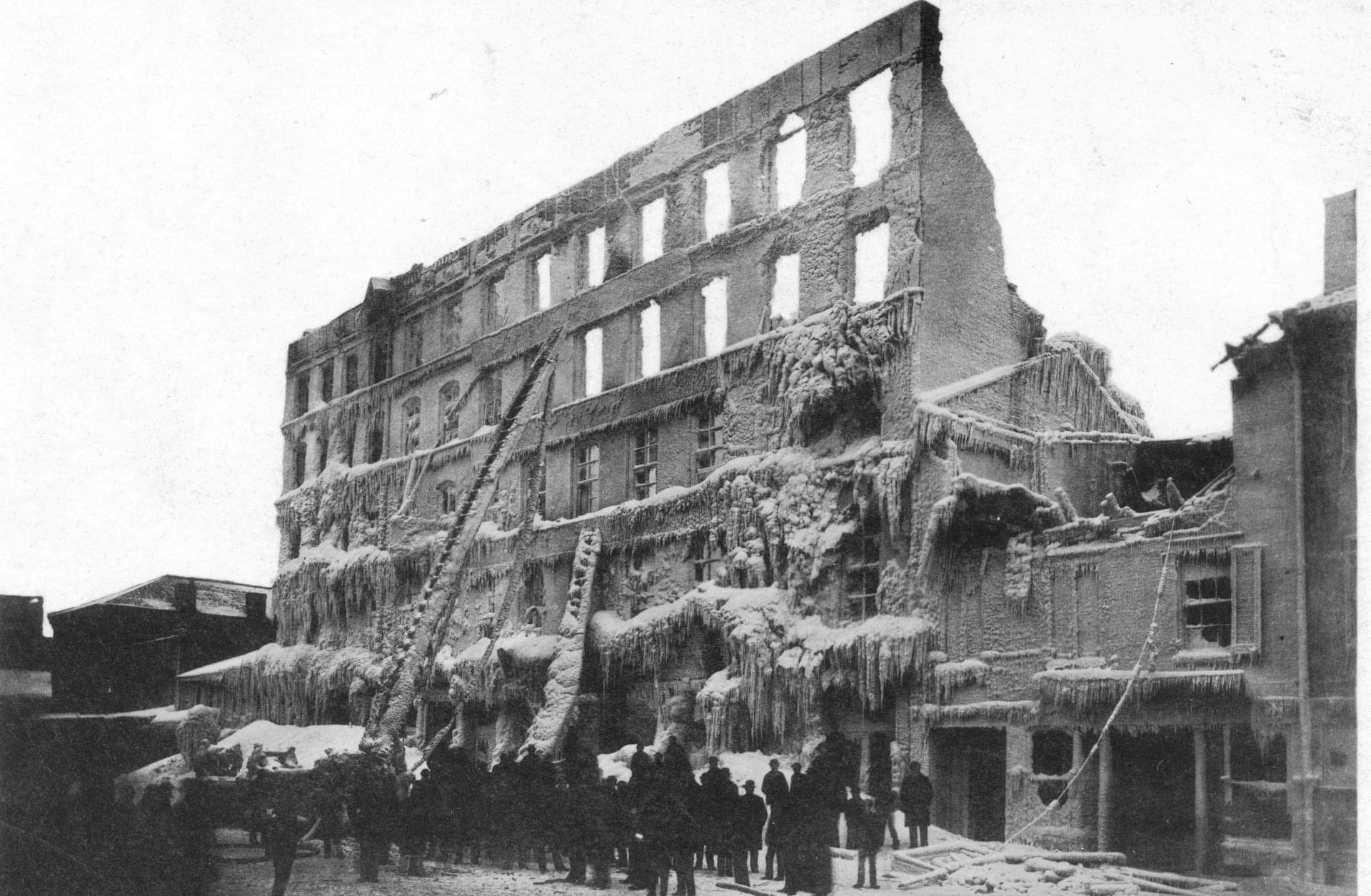 St. Louis just experienced one of its coldest and snowiest weeks in recent years.  However, to any of its longtime residents, this is certainly not the first time that weather like this has come to the area.  In the past decade, St. Louis has experienced relatively mild winter seasons, with only a few major snows.  However, going back further in St. Louis history, there were plenty of years that were significantly colder or snowier than last week.

St. Louis recorded its coldest day on record in 1884, on January 4th.  This was an extremely cold day, with temperatures reaching as low as 26 degrees below zero. On this record cold night, the St. Nicholas Hotel, located on 4th Street, between Morgan and Franklin ( today’s Delmar and Martin Luther King), caught fire as the building had lit its furnaces and tried to keep the place warm in the extreme cold.  Newspapers at the time said that the building really didn’t qualify as a hotel on that night, because only the shops on the lower floor were occupied during the fire, and fortunately, nobody was staying in the hotel that night.  The St. Nicholas Hotel was completely destroyed, but it was later rebuilt in 1893 by Louis Sullivan, at 8th and Locust.  The new St. Nicholas also suffered a fire, and was converted to office space, before eventually being demolished in 1972.

In 19th century St. Louis, it often got so cold for an extended period of time that the Mississippi River would regularly freeze solid.  A picture from January 1873 shows the river frozen over, as the pillars for the then incomplete Eads Bridge sticking through the ice in the frozen river.

In the early 20th century, the frozen river became a popular spot to buy liquor on Sundays in the winter.  Missouri had laws at the time that forbade anyone from selling alcohol on Sundays.  To get around this law, St. Louisans would walk out into the middle of the frozen river, where neither Missouri nor Illinois enforced liquor laws, and set up stands to sell booze.  A popular tradition for St. Louisans was to traverse out into the middle of the icy river and patronize these stands during the coldest days of the year.  However, after prohibition passed in 1919, this pastime quickly died off.

Throughout the early 20th century, the city had numerous cold and snowy winters, none of which were as cold as January 1884, however.  In 1912, a  snowfall of 15.5 inches was the highest on record for the century.   It was only beaten by an 1890 snowfall of 20.4 inches.  (St. Louis Post-Dispatch)

The most memorable snowstorm in recent St. Louis history is the Blizzard of 1982.  This blizzard was recorded with over 13 inches of snow, and is well remembered by older residents of the city.  During this snow, α thunderstorm turned into a blizzard, and blanketed the area with an unexpected snowfall.  Of all of the major winter storms in St. Louis, this is the most photographed and recorded.

As we experience the coldest and snowiest part of the winter this year, we should remember the numerous winter storms that have occurred here throughout our history.

A row of houses on Mississippi Ave during the snow in 2021.

Nathan Jackson is the owner and founder of the Facebook page and tour company, St. Louis History and Architecture. His primary area of expertise is with 19th century and early 20th century St. Louis history. Nathan is a lifelong St. Louisan, and currently lives in the Tower Grove East neighborhood.