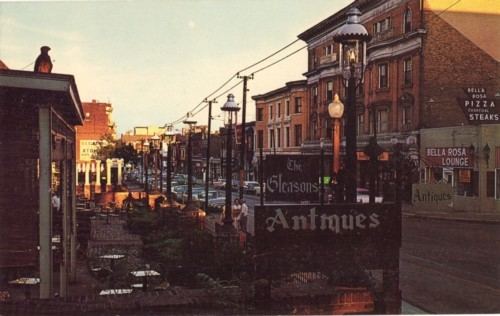 In 1904, St. Louis hosted the World’s Fair. It was there that “more new American foods were invented… than during any other single event in history. The list includes the hamburger, the hot dog, peanut butter, iced tea, the club sandwich, cotton candy, and the ice cream cone.” Guests would travel via streetcar to the fair using a vast system in St. Louis perhaps as impressive as any in the country. It was this event that inspired the famous Judy Garland flick “Meet Me in St. Louis.”

In the years surrounding the World’s Fair, St. Louis was an empire city. Proudly proclaiming itself the “Fourth City” (for its population rank), it was the hub of American expansion to the west during the 19th century. It was in St. Louis that Anheuser-Busch began its ascension to the brewer’s throne in 1852. It was in St. Louis that engineering marvels like the Eads Bridge, the first steel-truss bridge, were realized.

When St. Louis opened its Union Station in 1894, it was the busiest train station in the world. It was St. Louis’ Washington Avenue that claimed more shoe manufacturers than any street in the world while the city was the number two garment manufacturer to New York City. As the automobile became a staple of American life, it was St. Louis that was second in car manufacturing only to Detroit. It was St. Louis where the Corvette was produced. The American story is incomplete, or perhaps even abstract, without an understanding of St. Louis.

From the now vanished Deep Morgan neighborhood, Henry Brown played his piano while Chestnut Valley (now the site of the St. Louis Blues hockey arena) became the heart of ragtime music featuring the likes of Scott Joplin. Miles Davis built his career in St. Louis’ Gaslight Square, another vanished neighborhood memorialized by a collection of columns. Chuck Berry became the father of Rock and Roll right here in St. Louis and Nelly upheld a civic tradition of revolutionary music when he released Country Grammar. Smino recently emerged from the St. Louis scene before moving to Chicago. And the underground music scene is one of the most respected by those in the know.

The St. Louis Symphonic Orchestra is among the best in the world. Museums are free to all throughout the city. That makes a trip to the Art Museum easy and frequent. The various history museums help to cultivate a civic pride and knowledge. The Zoo is also free and annually recognized as a top institution. The Muny is a 100 year-old outdoor theater that offers free tickets to every show. The arts are heavily promoted throughout the region.

The literary footprint of St. Louis is also not to be taken lightly. Tennessee Williams, T.S. Eliot, and Kate Chopin were all deeply influenced by their experiences in St. Louis and their writing reflects it. Eliot once wrote, “It is self-evident that St. Louis affected me more deeply than any other environment has ever done. I feel that there is something in having passed one’s childhood beside the big river, which is incommunicable to those people who have not. I consider myself fortunate to have been born here, rather than in Boston, or New York, or London.” Maya Angelou once called St. Louis home, as well, living in a brick home in The Gate District. Walt Whitman often visited St. Louis, where his brother was the Water Commissioner, and would read to Kindergartners.

St. Louis is also the consummate sports city. The Cardinals are second only to the Yankees in World Series titles. There is a unique pulse in this city on a Cardinals game day. The team stands as a common denominator between those who might not ordinarily share interests. Additionally, the city has a meaningful place in the history of Negro League Baseball, which Major League Baseball recently posthumously recognized as a major league. The former site of Stars Park, a Negro League stadium in the heart of the historic black Mill Creek Valley neighborhood flattened via urban renewal in the 1950s, is currently home to an HBCU (Harris-Stowe) baseball team and the stadium is undergoing a renovation in partnership with the St. Louis Cardinals.

St. Louis is a city that has won a championship in every major sports league aside from the MLS (but has also secured an MLS team to begin play in 2023) and even then has a storied soccer history few other cities can mirror. When the Blues won the Stanley Cup last year, crowd estimates rose into the millions. I waited in line for over an hour to buy a Stanley Cup Blues Jersey before getting onto a plane to fly back to Seattle. Perhaps they can prevail as a Darkhorse in the NBA expansion sweepstakes.

Like any great cultural hub, St. Louis has many foods that are unique to the city. Toasted Raviolis are perhaps one of the greatest Italian-American inventions of all time. St. Louis Style Pizza isn’t for everyone (the less refined find it distasteful) with its provel cheese and cracker thin crust, but it says something about the city that it was daring enough to create a unique style of pizza that has stood the test of time. St. Louis has a good-to-great BBQ scene. French food is popular here thanks to the city’s heritage and cajun eats are fairly common with the city’s ties to New Orleans. Gooey Butter Cake is a dessert popular with the masses. For particularly unique meals, you can find Bosnian food like pide from Balkan Treat Box and Ozarkian eats at Bulrush.

While many cities are heralded for their upscale dining, St. Louis is perhaps the mecca of working class American cuisine. It’s affordable to the masses and it’s well loved. But that doesn’t mean that St. Louis is ignored when it comes to awards. The city regularly boasts James Beard finalists. This past year there were eight.

The architecture here rivals the best in the country, too. For most cities this is true. Our cities are architectural galleries, especially in the business corridors. In St. Louis’ business corridor, historic buildings line the streets. The Wainwright Building is one of the first recognized skyscrapers thanks to its steel frame. The new 100 Above the Park (whose rental rates would be average in superstar cities like Boston or Seattle) sits across from the 1300 acre Forest Park that offers every recreational activity you could hope for.
Two basilicas (most cities only have one if they are lucky) stand proudly in the city: one in Gateway National Park and the other in the Central West End.

But it is the residential architecture that sets St. Louis apart. Beautiful brick homes line the streets throughout the city and one can’t help but admire each house on an evening stroll. Every house feels like a work of art and a labor of love, really. And there are few cities where that feels like the case. St. Louis has lost more beautiful homes than many cities have ever had, and yet it still retains an unmatched residential charm.

St. Louis has an energy that flows with the consistency of its great rivers. It’s a deeply cultural city that has been forgotten and dismissed by much of America. But that doesn’t mean the culture has died. Much the opposite. And the pride of the people here when it comes to St. Louis culture is next to none.