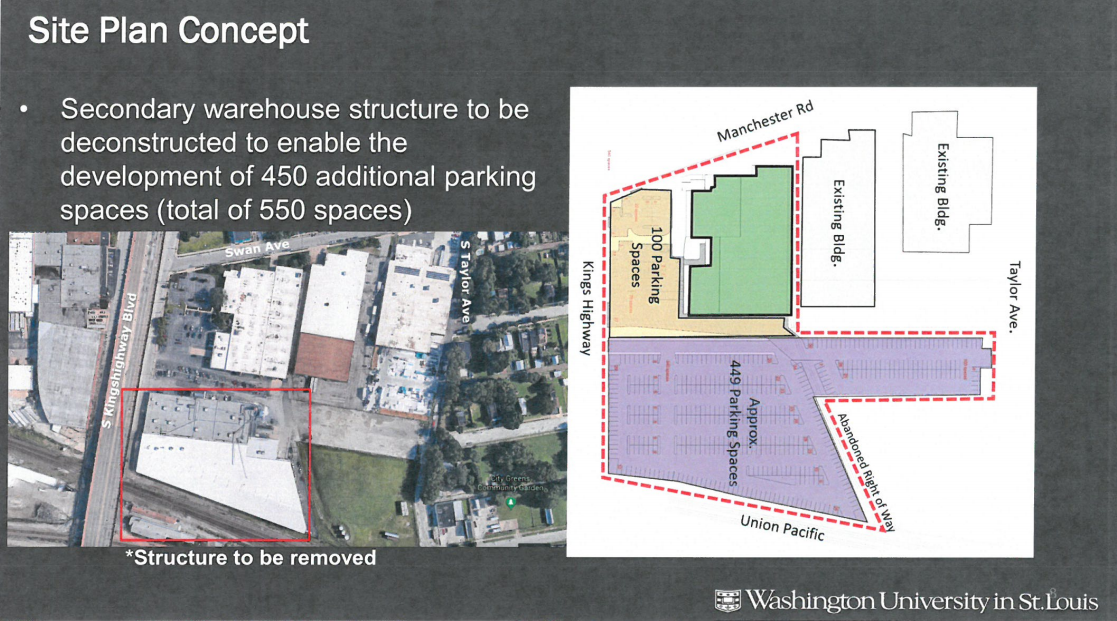 The proposed project will re-develop a tract of land at 1234 Kingshighway. The site purchase includes two buildings and surface parking. The building adjacent to the Union Pacific mainline will be raised. A proposed 550 surface parking lot will be planned. The remaining building, will be renovated as office space for WUSM facility and staff use.

We see the opportunity cost of providing thneeded parking for both the private and public sectors. Because parking is thneeded, WUSTL is expending wealth to provide it that could be going somewhere else.

For the public sector, the tax base is eroded and the public are on the hook to deliver the infrastructure needed to serve the parking lot, all without the same opportunities for scrutiny that other types of tax subsidies like property tax abatements and TIFs might receive. The incentive structures for drivers are baked in the cake. To add insult to injury, since it’s owned by Washington University, it is property tax exempt. Worse unlike abatements and TIFs which end at some point, the subsidy for drivers is in perpetuity.

That is until something more productive replaces it. I wrote about the high cost of parking on Pershing years ago. Now that parking lot is the Tribeca apartment building. While that building received a perhaps-too-generous 20-year property tax abatement, it will end, unlike the subsidy the parking lot received for decades after five buildings were razed for it. That subsidy is more insidious as it’s not on the pro forma of a development, but exists nevertheless.

Nextstl – The High Cost of Parking on Pershing

It’s these sort of low-productivity auto-oriented land uses that sows insolvency in our city. The land productivity (tax exemption aside) is certainly not enough to cover the long-term costs to provide the infrastructure the public has promised it, let alone the services governments are trying to deliver. Tough luck SLPS, St Louis City, ZMD, MSD, etc. The community makes up the driving subsidy through higher tax rates or forgoing a higher level of infrastructure and services.

If we want a high level of infrastructure and services in our city, low-productivity auto-oriented land uses like this must be minimized.