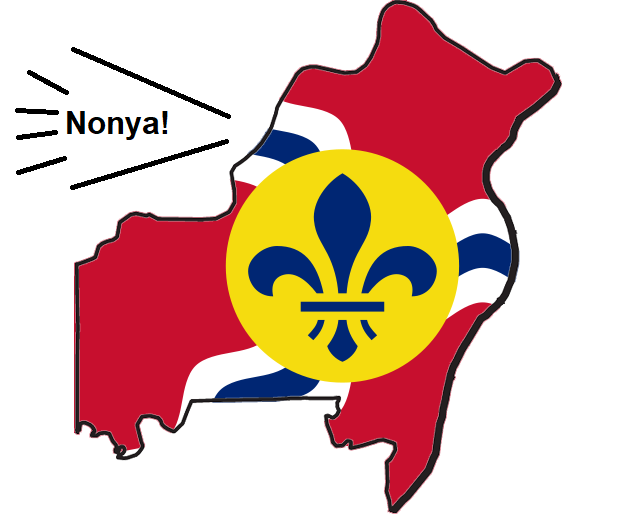 No, according to some vested in fragmentation and opposing the Metro City plan. Why should the rest of the state have a say in our government structure? What if a majority of voters in St. Louis City and/or County reject it, but the rest of the state makes up the deficit? They claim the prospect of a state-wide vote on merger would violate the American values of “the government closest to the people serves the people best,” and “government by the consent of the governed.” A perfectly reasonable position to take.

The thing is that is not our system. The US Constitution centers a lot of power at the state level and none at the local level. States create political subdivisions such as cities, counties, and school districts. They are at the mercy of the state.

In 2009 the Missouri Board of Education voted to merge the Wellston School District with the Normandy School District. No vote of the legislature, no state-wide vote, no local vote.

This could be said of so many of our fragments, including those that appear to be “winning” at the moment – The long-term prospects for Wellston are not encouraging,” she told the board. “The district’s financial base is weak and unlikely to improve in the near term. The district’s facilities need extensive renovation or replacement, but the district lacks the resources to undertake such projects.

StlToday – School’s over for Wellston district State board disbands it

Beyond the legislature, voters across the state have done the same. In November 2012 the whole state considered whether St. Louis would have local control of its police department. If we really believed that “the government closest to the people serves the people best,” then state control of the SLMPD wouldn’t have happened in the first place or would have been undone by the legislature soon after the Civil War ended. Since the legislature couldn’t find the courage to trust local government, the whole state had to vote on the question. 2,531,586 Missourians voted on the proposition including 487,095 in St. Louis County. Voters aren’t compelled to vote on every item on the ballot. Where was the hand ringing over the possibility of St. Louis City voters rejecting it and the rest of the state making up for it? Why didn’t voters outside St. Louis abstain from something that only affected St. Louis City? Only 1.7% of voters left this item on the ballot blank.

In 2010 Missouri voters considered an amendment proposed by the legislature that would force charter counties except Jackson County (St. Louis, St. Charles, and Jefferson Counties) to have elected assessors, something those counties could do on their own by amending their own charters. 1.835,556 votes were cast on the amendment, including 82,041 in St. Louis City. Shouldn’t voters outside those counties have abstained? Only 5.6% of Missouri voters left the question blank.

Also in 2010 Missouri voters considered whether St. Louis and Kansas City should be forced to vote on whether they keep their earnings taxes every five years. 1,896,889 Missourians, 97.6% of voters, voted on the proposition, including 367,929 voters in St. Louis County. Again voters should have abstained, if it is none of their business. Where was the hand-ringing over the possibility that either/both Kansas City and St. Louis voters rejected the proposition? St. Louis City voters said no by over 37 points. Kansas City voters rejected by over 10 points. Where were the outcries over this miscarriage of democracy?! This usurpation of sovereignty?! This assault on our basic American values?! Where were the state legislators who now decry the state-wide merger vote then? They could have passed a bill to modify the proposition (it wouldn’t have been the first time) to respect the will of the voters in St. Louis and Kansas City.

But wait that statute also banned new earnings taxes state-wide, so it affected the whole state. Well if “the government closest to the people serves the people best,” than the proposition should have failed and local governments would have retained the power to tax how they saw fit. 1,297,197 voters voted yes.

But wait plenty of Missourians live outside Kansas City and St. Louis and pay the earnings tax. Then it’s clear that what happens in fragments has consequences beyond them, despite what fragmentists would have you believe. Perhaps fragmentation being the state’s business isn’t so far-fetched.

If you’re upset that the whole state might vote on the question of merger, I get it, but consider whether, how, and why you voted on these questions in the past.