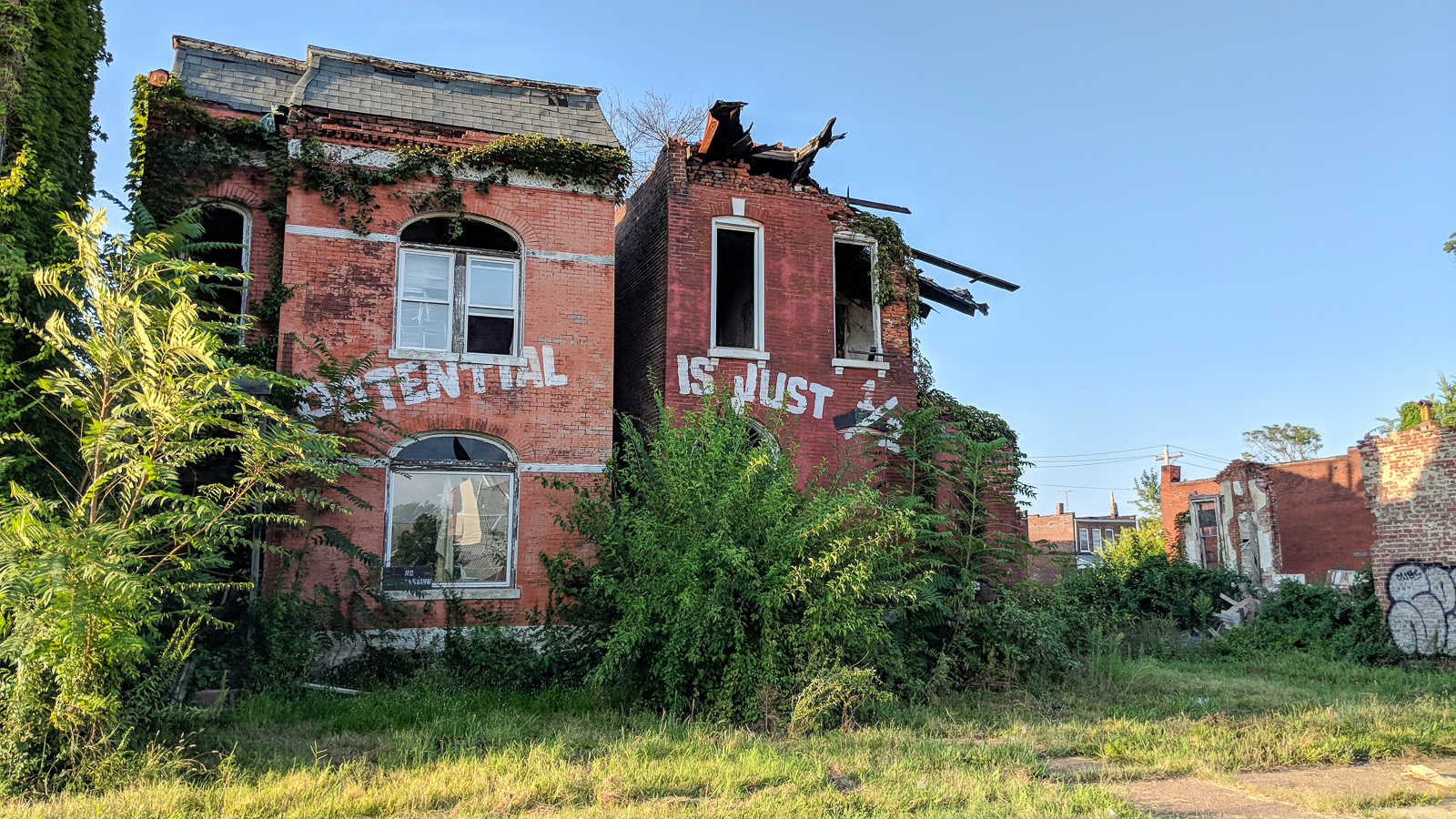 As court proceedings prepare to begin Tuesday, August 28, in the state’s case against Paul McKee and NorthSide Regeneration over state tax credits, many have been looking into St. Louis City’s 2009 TIF (Tax Increment Financing) agreement with the company. At the time, developer McKee was buying large swaths of the northside partly with public subsidies.

Developer Paul McKee’s lofty plans for redevelopment on the northside received early criticism from neighborhood advocates and historical groups. When applying for a TIF back in 2009, his company provided a database of properties to the city intended to be rehabilitated.

Landmarks Association of St. Louis and GeoSTL performed a survey of those properties originally intended to be rehabilitated. The survey found that all of the properties had deteriorated significantly and some were completely gone.

Landmarks Association of St. Louis is a preservation advocacy group. After the Clemens House burned down in 2017, the group was inspired to check in on other properties owned by Northside and labeled as “to be rehabilitated.” These properties resided on a map and in a database generated by Northside and provided to the City of St. Louis in 2010. The results found only 19 of the 155 properties were still considered to be habitable. The other 136 properties, all located just north of downtown, varied in decay from uninhabitable– to mere shells of buildings –to now vacant lots.

“We didn’t think it was right to give up on these high-quality historic buildings,” said Andrew Weil of Landmarks.

Weil noted the application has went through several revisions since its original form, but the original content included 155 properties, presumably of the highest value and therefore lowest lift for rehabilitation.

The most significant property on the list was the Clemens House. The mansion was originally owned by James Clemens, Jr., a relative of Samuel Clemens, better known as the writer Mark Twain. Built in 1859-1860, the home served as an iconic example of Palladian style. It was made into a city landmark in 1971.

The property caught fire in 2017 and was damaged beyond repair. The cause of the fire was under investigation at the time, and the property was without electricity. The remains were demolished in 2018. Before the property burned, it had been owned by McKee for eight years with no notable rehabilitation efforts undertaken in that time.

While the Clemens House may have been the most historically significant, several of the properties had historical value. Many were built in the mid to late 1800s. Several, such as those on Howard St., feature decorative mouldings and other unique characteristics.

Kasimu Taylor is a former resident of Howard St. near the NGA construction site, an area that has become particularly blighted in the years of NorthSide’s ownership. His old building is now a large, vacant lot. Not a single building left on the 2600 block of Howard St. is still habitable.

Taylor has fond memories of the Snack Shop at the corner of Madison and Elliot. He also remembers Mr. Green across the street who owned one of the properties now left to decay. “He was always nicely dressed and kept his house in perfect condition,” he said.

Of the 17 properties on Howard owned by McKee’s company, only five are considered habitable, while ten are marked uninhabitable buildings and two have become vacant. The 1700 block of North Leffingwell Ave. just around the corner features another entire strip of uninhabitable under NorthSide’s ownership.

Taylor said, “These were neighborhoods, but if you don’t have value on the people who live in a  certain area, it’s easy to just write it off.” Neighborhoods in the area include Jeff Vanderlou, St. Louis Place, Carr Square, and Columbus Square.

The term “habitable” in the survey has fairly loose implications and doesn’t necessarily mean livable. The requirements mainly consist of having four walls, secure doorways and windows, and a functioning roof– a baseline standard which a majority of the properties do not meet.

Many of the properties reserved for rehabilitation on this list would not have been eligible for demolition in their original state due to rules in place against demolishing historical homes, especially the Clemens House. However, “Demolition by Neglect” is a term used for when a property owner leaves a property to deteriorate over time, often with the intention of circumventing preservation laws.

In previous interviews, McKee has insisted that the buildings were already in poor condition. Alderwoman Cara Spencer disagrees.

“The thing none of us realized was that Paul McKee wasn’t getting cited for those building code violations,” said Spencer. Part of the original TIF deal struck with McKee included an exemption from building code violations. Spencer introduced legislation to reverse that exemption in 2017. An example of a finable violation under this bill include buildings that are missing windows or doors, which a majority of NorthSide properties included in the survey fall under.

The neglect of a particular building can do damage to all the surrounding area property values. Destabilized buildings are also hazardous, both to the people around them and particularly the the fire department. If a neglected building catches fire, the fire fighters may have to enter a property in already poor condition to search for people. While the exemption has been overturned, Weil noted the cost of rectifying the situation often far exceeds the cost of the fine.

The timeline for fixing these properties was changed, not by the city officials but by St. Louis Development Corporation (SLDC). SLDC is a non-profit that operates with its own independent board but is largely publicly funded. Part of the investigation will determine whether SLDC had the authority to unilaterally change the agreement with the city. Alderwoman Spencer thinks it did not.

Not only was the city not privy to the details of these amendments, they’re not even currently sure how many exist, according to Spencer. “We have no idea what is actually governing the agreement between the city, SLDC, and NorthSide Regeneration,” she said.

Aubrey Byron writes for NextSTL and Feast Magazine, and was previously a staff writer at Strong Towns, a nonprofit media organization focusing on public policy and development. She is also an avid cyclist and former president of the advocacy group, The Monthly Cycle. She resides in Fox Park, St. Louis.