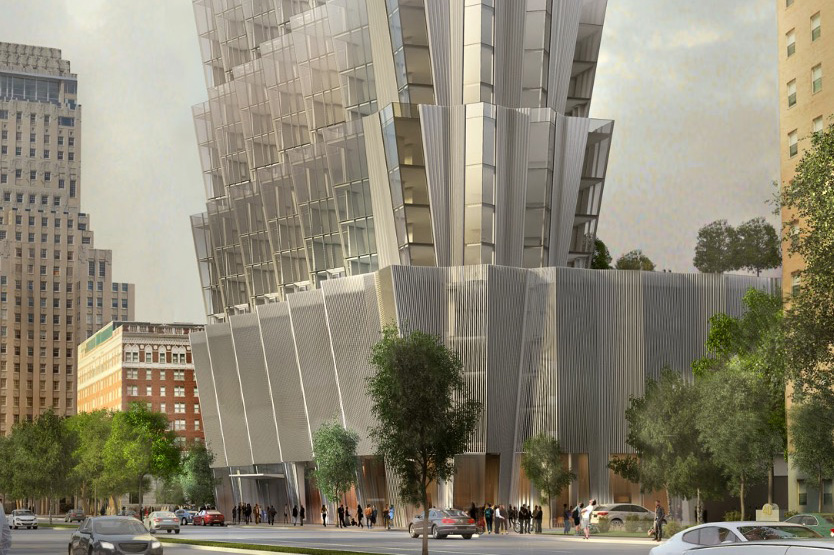 In February, construction began on the most ambitious residential project in St. Louis’s Central West End in nearly a century. The One Hundred building is a 36-story tower that will transform the skyline on the eastern side of Forest Park. It is the first building on Kingshighway Boulevard that will surpass its neighbor to the north, the Park Plaza, in terms of height. And just as the Park Plaza’s construction symbolized the optimism of the 20thcentury’s Roaring Twenties, One Hundred is emblematic of a decade that may come to be remembered as the 21st century’s Roaring Teens. 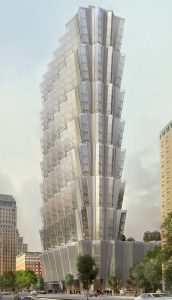 One Hundred tells us a number of things about St. Louis and the Central West End, current conditions in the real estate market, and perhaps the direction of the entire U.S. economy. Here are six of them.

First, and most obvious, developer Mac Properties is marketing One Hundred’s 316 units as luxury apartments rather than condominiums. This illustrates how the real estate market has changed from 15 years ago, when new construction like the nearby Park East tower (26 stories containing 89 units) was sold as condos during a nationwide mortgage boom fueled by aggressive lending and a securitization machine greased by Wall Street and government-sponsored enterprises Fannie Mae and Freddie Mac.

So far during the Teens, multifamily building in St. Louis and elsewhere has been dominated by units for rent rather than for sale. Tighter regulations have kept lending standards relatively rigorous, subduing growth in the mortgage industry. Around the time work began on One Hundred, the Federal Reserve Bank of New York reported that mortgage balances for the U.S. a whole at the end of 2017 were still below their 2008 peak, even as overall household debt was setting fresh records. (If One Hundred ever “goes condo” at some point, it will be evidence that the mortgage-lending spigot has been turned back on.)

The second message One Hundred sends is that Washington University Medical Campus(which includes Wash U’s medical school and affiliated institutions such as Barnes-Jewish Hospital) continues to consolidate its position as the most reliable job creator in St. Louis. BJC Health Systems and Wash U have been the city’s two biggest employers for at least a decade, according to the city’s 2017 financial report. Proximity to the medical campus, with 23,000 employees and its own compact skyline of shiny new buildings along Kingshighway, counts for a lot.

Peter Cassel, Mac Properties’ director of community development, underscored this in a recent phone interview. He says his company is targeting three main groups as potential tenants for One Hundred. Topping the list are professionals working at the medical campus and in the adjacent Cortex district. The other groups are white-collar workers in the broader central corridor from downtown St. Louis to Clayton, plus Baby Boomers/empty-nesters who want to stay in or come back to the city, Cassel said.

An incentive to debate

One Hundred, with a price tag reported at $130 million, also underscores how property development incentives are evolving in the Central West End. Mac Properties negotiated perks that include 15 years of property tax abatement: 95 percent during the first 10 years and 50 percent during the subsequent five years. This is less generous than the 20 years of abatement awarded a dozen years earlier to the Park East, a smaller project worth less than half as much. (The Park East abatement was coupled with a Community Improvement District that levies a special assessment on condo owners there until 2025, offsetting some of the benefits from the abatement.)

McPherson previously reported that expiring abatements will add tens of millions of dollars to the city’s coffers over the next several years, even as St. Louis officials continue to award incentives each year to projects big and small. The debate locally over development incentives is fractious; Moody’s Investors Service helpfully added fuel to the fire earlier this month when it downgraded the city’s general obligation debt, citing its weak financial position. One Hundred has been a special target of ire directed toward incentives, but obscured in this debate is the fact that the less generous package awarded to One Hundred actually marks progress. It’s a sign the city has more leverage now with developers over high-profile projects in the Central West End than it did during the last economic cycle.

This speaks in turn to the fourth point, which is that One Hundred will set a much bolder standard for height, density and design than the Park East or any other recent development in the neighborhood. Whatever the city may be giving up in terms of tax incentives, it is likely getting back in the form of an architecturally significant building by Chicago’s Studio Gang that will make other structures seem dull by comparison. Not everyone likes the design, which resembles a stack of coffee filters. Still, the parking lot that formerly occupied the One Hundred site is already a distant memory, and the building will raise the bar for developers who eventually build on other nearby parking lots, especially the windswept eyesore immediately to the north where Kingshighway meets Lindell Boulevard.

Rents in the new building are likely to be the highest in the city; Cassel and others at Mac Properties have been transparent about guiding expectations in this regard. Apartments in the Central West End generally rent within a range of $1.50 to $2.50 per square foot, depending on amenities and whether extras like parking are included. Citizen Park, a luxury building opened last year by the same developer responsible for the Park East, already tests the upper limits of this range. A two-bed, two-bath apartment there containing 1,408 square feet is advertised for $3,500 per month, which works out to $2.49 per square foot.

This indicates that some tenants of One Hundred could be looking at more than $4,000 per month for a two-bed unit, depending on the floor and the view. (Cassel declined to discuss specific figures.) Such prices are astronomical by St. Louis standards, but they might be palatable to a faculty member or postdoctoral researcher coming from one of the coasts or from overseas. And the “overseas” category is significant: A spokeswoman for Washington University School of Medicine told McPherson via e-mail that the school has about 1,345 international postdocs, fellows, faculty and staff. Medical students from countries including China, India and Mexico boost this figure even higher. One Hundred should be able to count on some of these transplants as future residents. In this sense, the building is a play not only on the real estate market, but also on Wash U’s continued ability to attract well-heeled scholars and faculty, both foreign and domestic.

A sixth and final point: The tower cranes that will appear soon at the One Hundred building site could signal the peak of the economic cycle that began in mid-2009. If this turns out to be the case, One Hundred would simply be following in the footsteps of other tall buildings in the Central West End that have impressive records as indicators of economic downturns.

The Park East was completed in the spring of 2007. Immediately, investors who had been riding the property bubble, but had no intention of actually living in the building, began putting their condo units on the market, hoping for a quick profit. This practice of flipping, replicated across the country, was an ominous sign. By the end of that year the U.S. was tipping into the Great Recession. (Fortunately, the Park East has proven to be a success over the long term.)

The Park Plaza has predicted at least two downturns. In the late 1920s, as construction began, what appeared to be optimism turned out to be hubris. The 28-story building was completed in early 1931, with the U.S. already in the Great Depression and the economy still two years away from hitting bottom. Several decades later the Park Plaza repeated the trick, this time in 2006, when its owners embarked on a four-year renovation to convert the upper floors into luxury condominiums. The eventual damage done by the Great Recession meant it would be 2016 before the developers sold their last condo.

Some buildings in the Central West End have displayed better timing. An example is Executive House, a red brick structure on West Pine Avenue near Taylor Avenue that manages to be enormous and unremarkable at the same time. It opened as apartments in the mid-1960s (“24 Floors of Magnificence!” said the advertisements in the St. Louis Post-Dispatch at the time) and the economy continued to hum along for several more years. (The building became condominiums 15 years later.)

As for One Hundred, it’s getting underway at a point when the current economic upswing – now the second-longest on record – is beginning to feel elderly. To be sure, inflation and wage growth remain tame, and most asset prices have not shown the bubble-like tendencies they did near the end of the 1990s, the decade in which the record-holding period of economic growth (10 years) began. The modest annual GDP growth during much of the current decade has made the Teens seem more plodding than roaring.

But disquieting signals are emerging in the bond market and elsewhere. The Federal Reserve Bank of St. Louis’s Financial Stress Index, for example, suggests mildly more stress in the markets than was the case last fall (although the overall level of stress is still comfortably below average). On the policymaking side a trade war with China remains a possibility. Against this backdrop, One Hundred is set to open in the summer of 2020. The views over Forest Park will be tremendous. The outlook for the economy at that point may be equally stunning, but for all the wrong reasons.

Jack Grone is the editor of McPherson - mcphersonpublishing.com, an independent journalism start-up based in St. Louis. He is a former reporter and editor for Dow Jones Newswires whose writing has appeared in The Wall Street Journal and Barron’s.