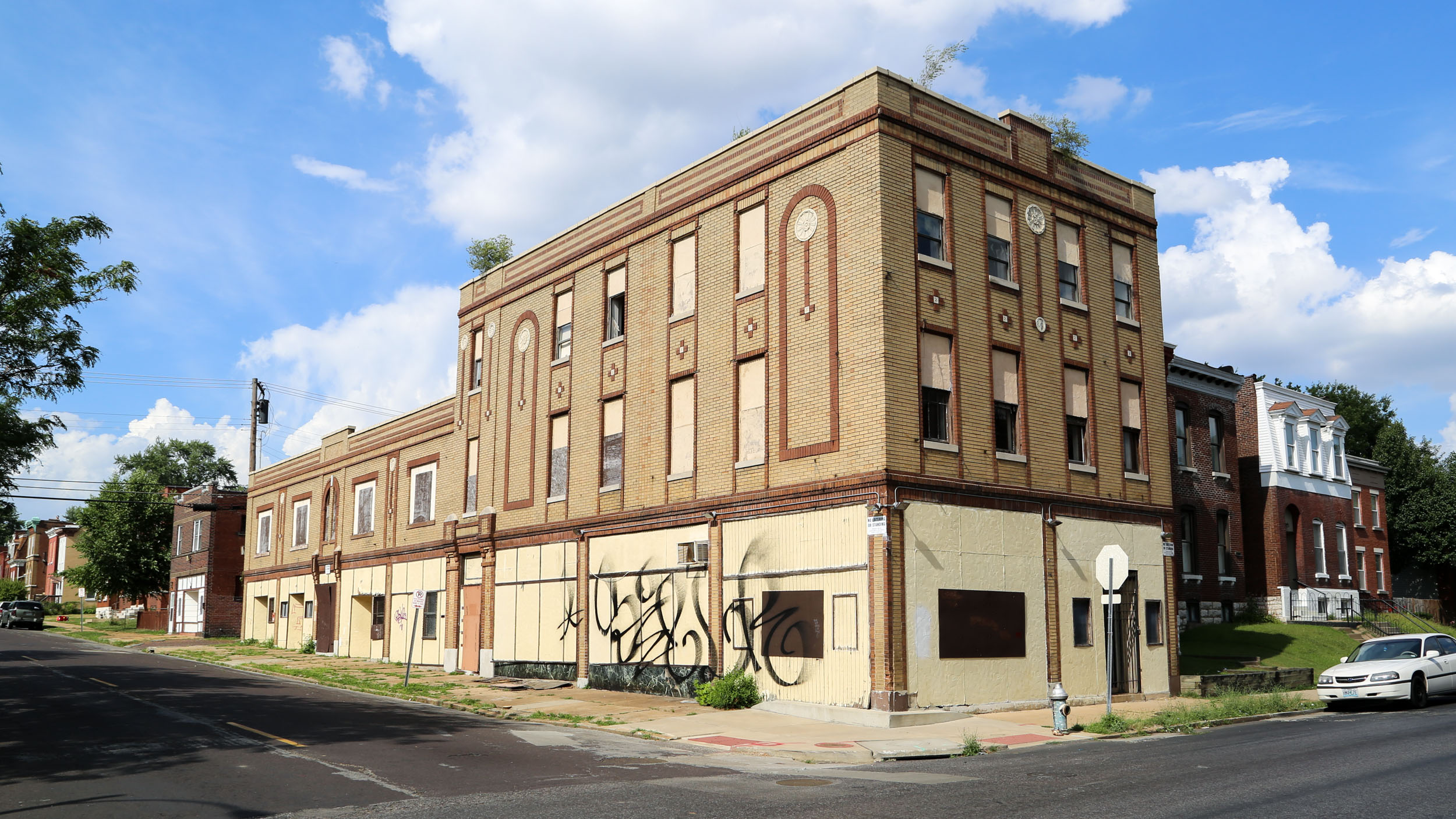 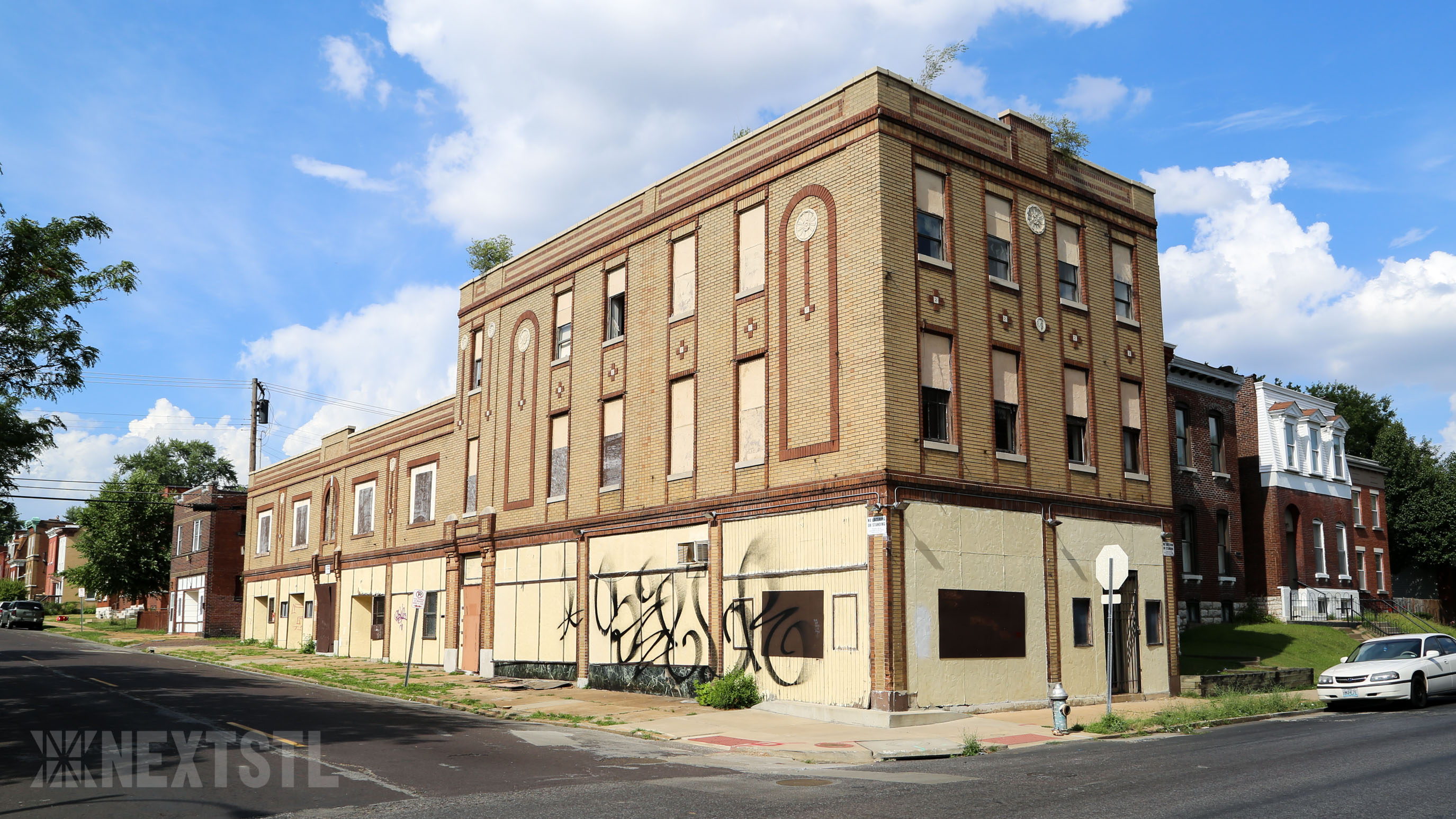 A mix of newly renovated commercial and residential spaces are coming to a once notorious and now crumbling shell at Chippewa and California. Helping reverse decades of neighborhood decline, the investment continues a budding renaissance along the Chippewa corridor four blocks south of the now thriving Cherokee Street commercial strip.

A streetcar line along California once connected the two commercial districts. Interior construction began this week on the two and three-story structure at 2755 Chippewa. Plans include four commercial and seven residential units. Three years of planning have gone into the $1,060,000 project. 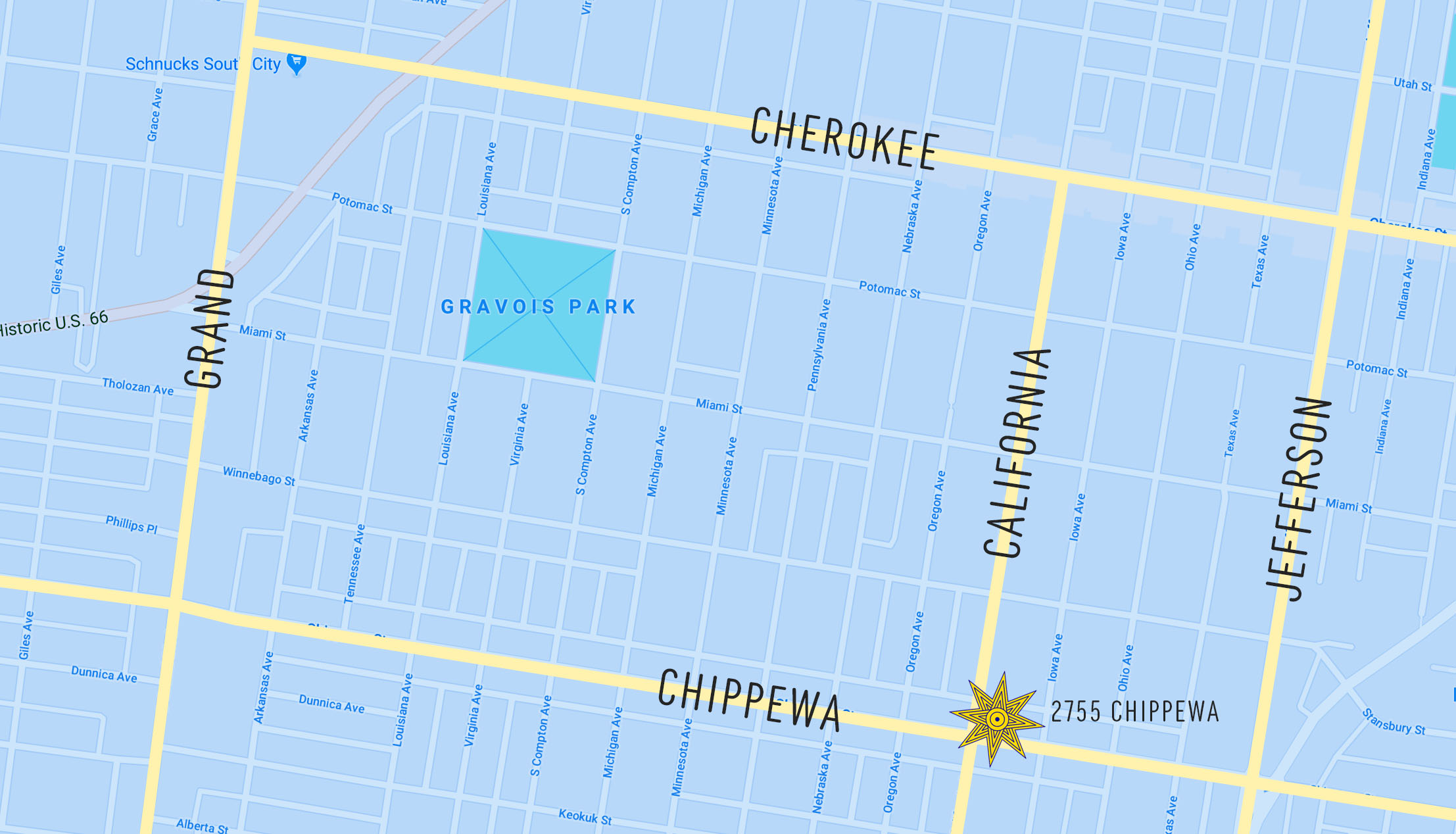 The development by South Side Spaces will help bring a fully renovated intersection to a neighborhood where corner commercial structures can be the first to see neglect and the last to see renovation. A decade ago the building housing Gooseberries across Chippewa was restored. Sam Meller led that effort. Meanwhile, Rise Community Development is about to begin redeveloping the Heintz Block at the southwest corner of the intersection. That project will grow to include the historic renovation of 16 buildings to create 46 apartments in Gravois Park and Dutchtown and 8,000 square feet of commercial space on Chippewa. 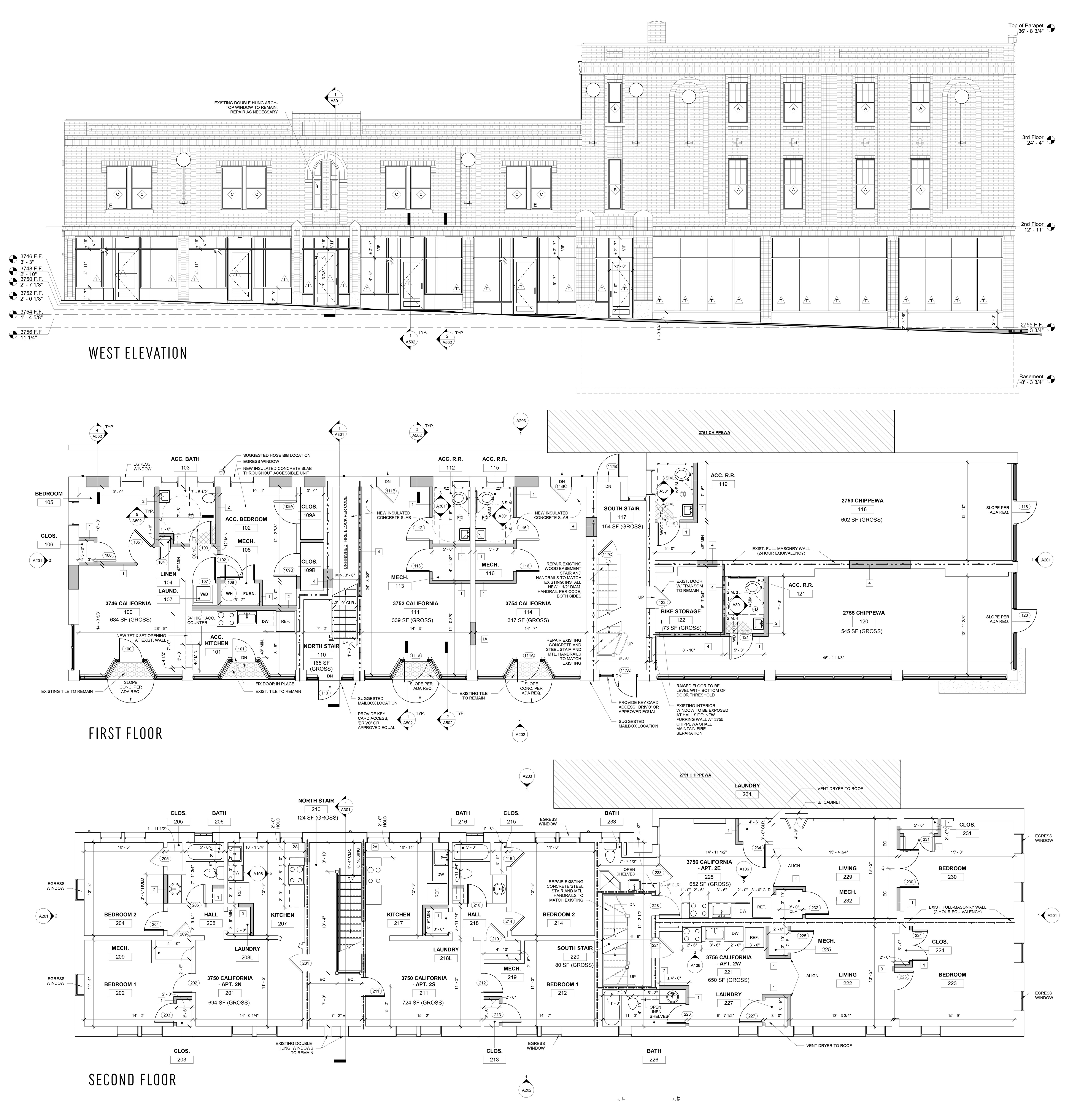 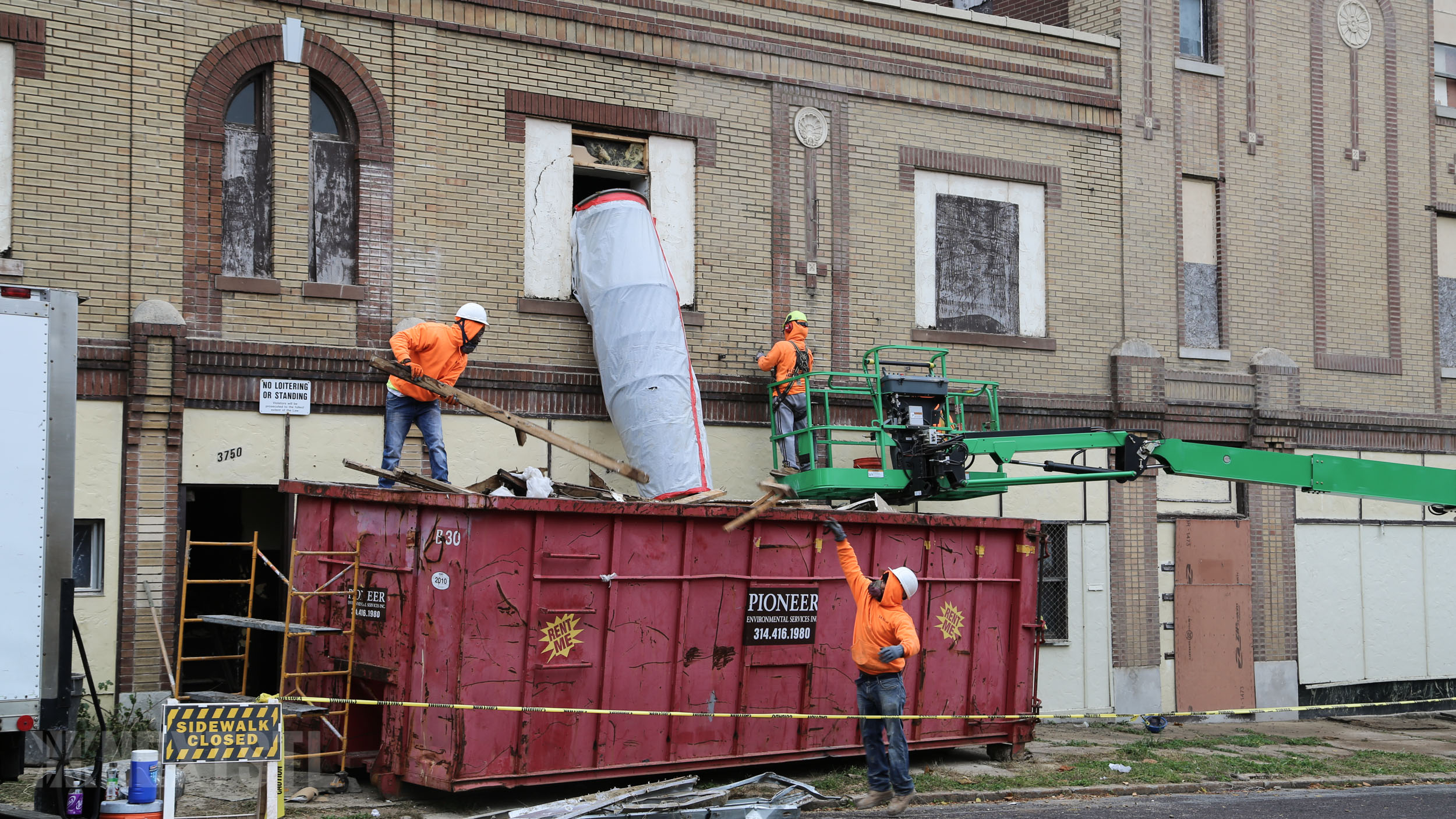 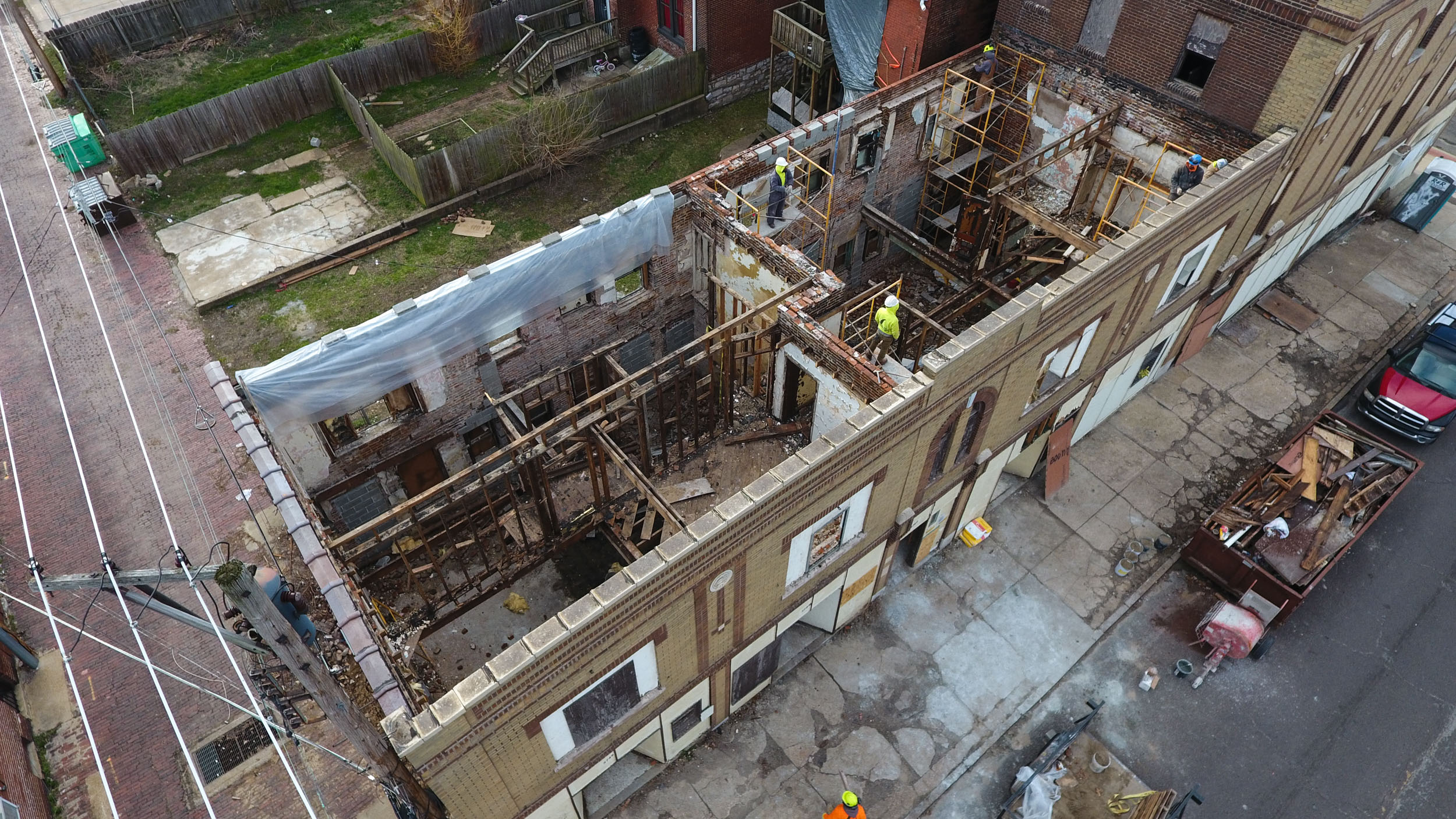 The building at 2755 Chippewa has a storied past. From the end of the 1940s through the 1970s, the raucous Harold’s Tavern held down the intersection. Harold’s team competed in the St. Louis corkball title tournament against the Spengemann Plumbers in 1947. Corkball had been a St. Louis invention since the 1890s, spreading nationwide only after the Second World War when returning servicemen had picked up the game from their buddies from Mound City. But if patrons came to Harold’s, sometimes known as Harry’s, to boast about corkball, perhaps they stayed to enjoy a glass of Conrad’s Laurel Springs Kentucky Straight Bourbon Whiskey—a brand also served at Garavelli’s in Gaslight Square and at Al Smith’s on South Grand. 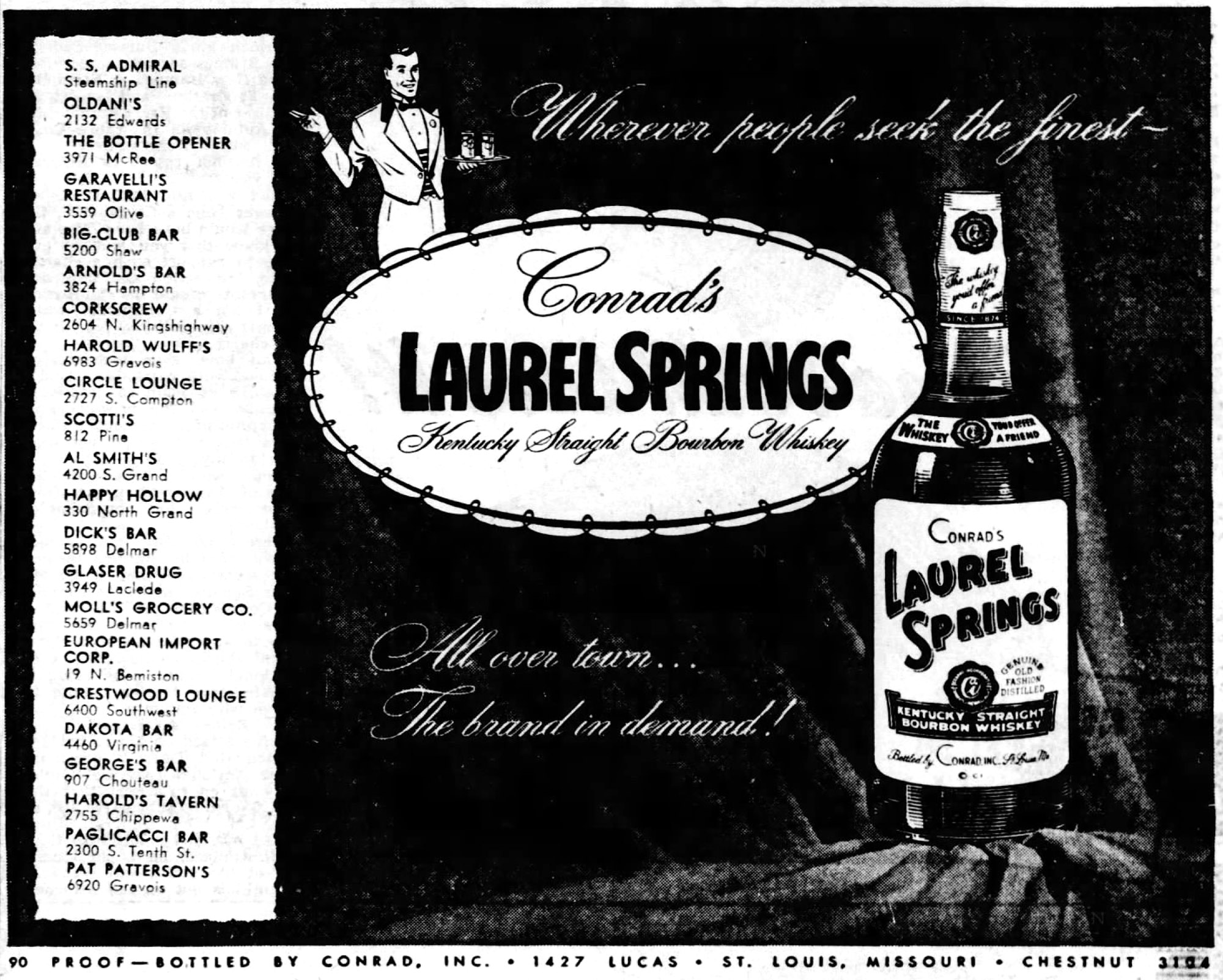 Over the years, there were arrests. A 1949 article in the St. Louis Star and Times cites the arrest of a 46-year-old man in Harry’s Tavern for playing a “juke box” too loudly. The term jukebox was coined in 1940, and by the end of that decade had become popular in American eating and drinking establishments, replacing the player pianos that once graced saloons across the continent. Sadly, the new technology was lost on August Diepenbrock, who lived upstairs and who called the police because of the noise.

At one point, the same building also housed a notorious Southside gambling operation in back. A 1950 photograph in the Post-Dispatch depicts the printing press seized in a police raid to break up the illegal operation. Within this den of vice and iniquity, it seems the villains had printed lottery tickets for South City residents who liked to bet their paychecks on the unpredictability of the St. Louis weather. 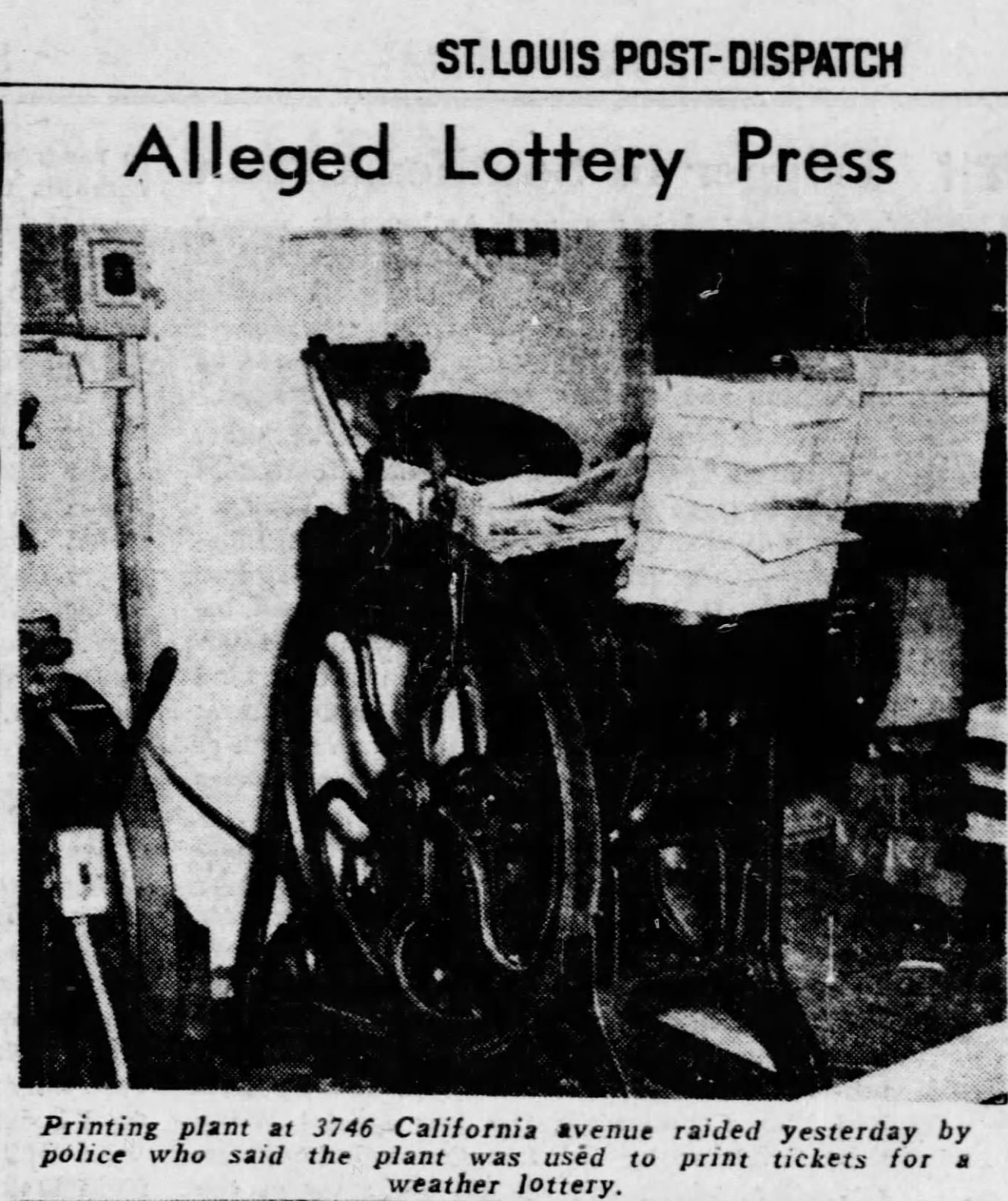 One of the most prominent buildings along this stretch of Chippewa, the structure had been at risk of collapse. Both the 3-story and 2-story portions of the building had sections with significant structural damage on all floors. 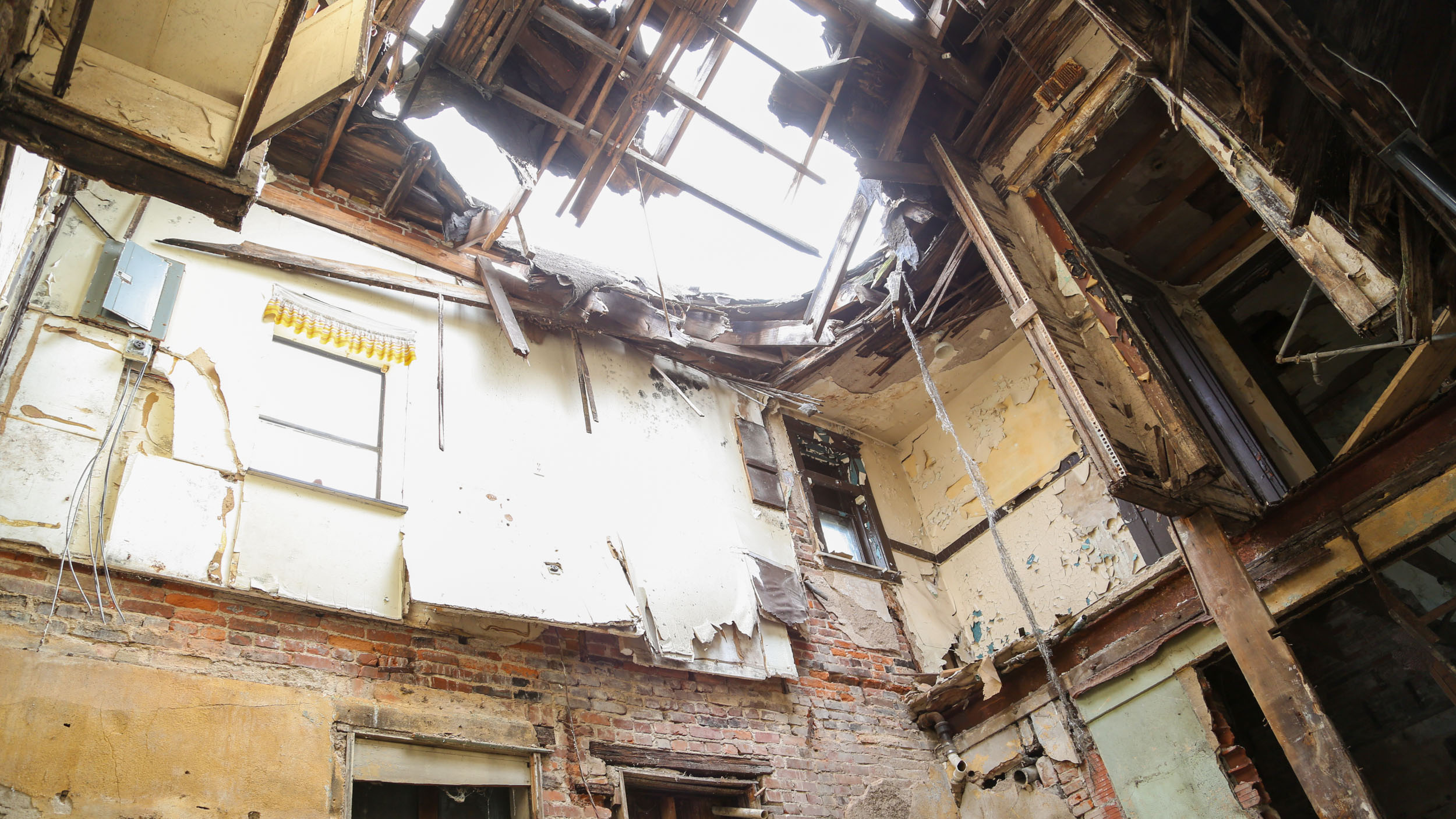 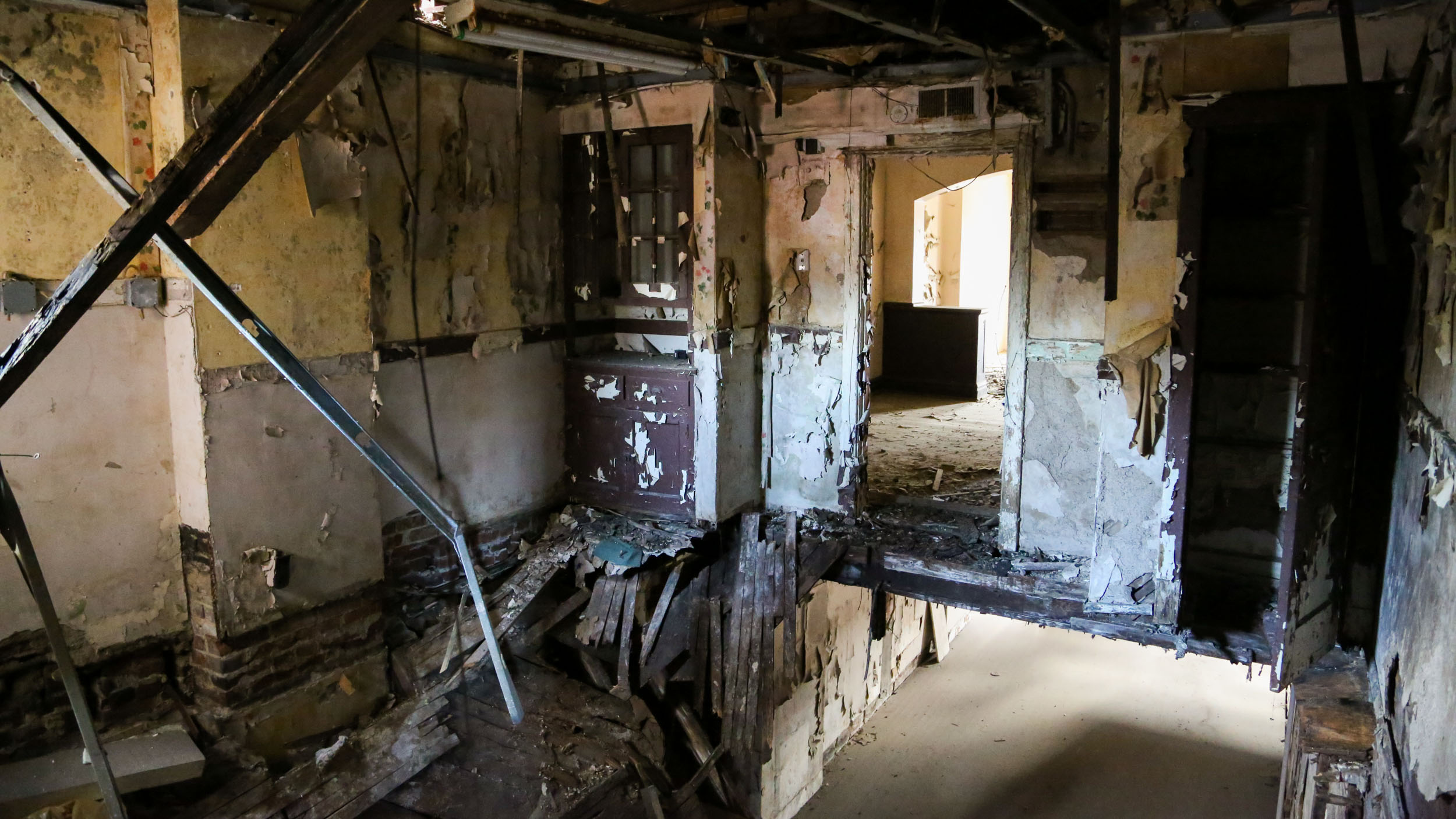 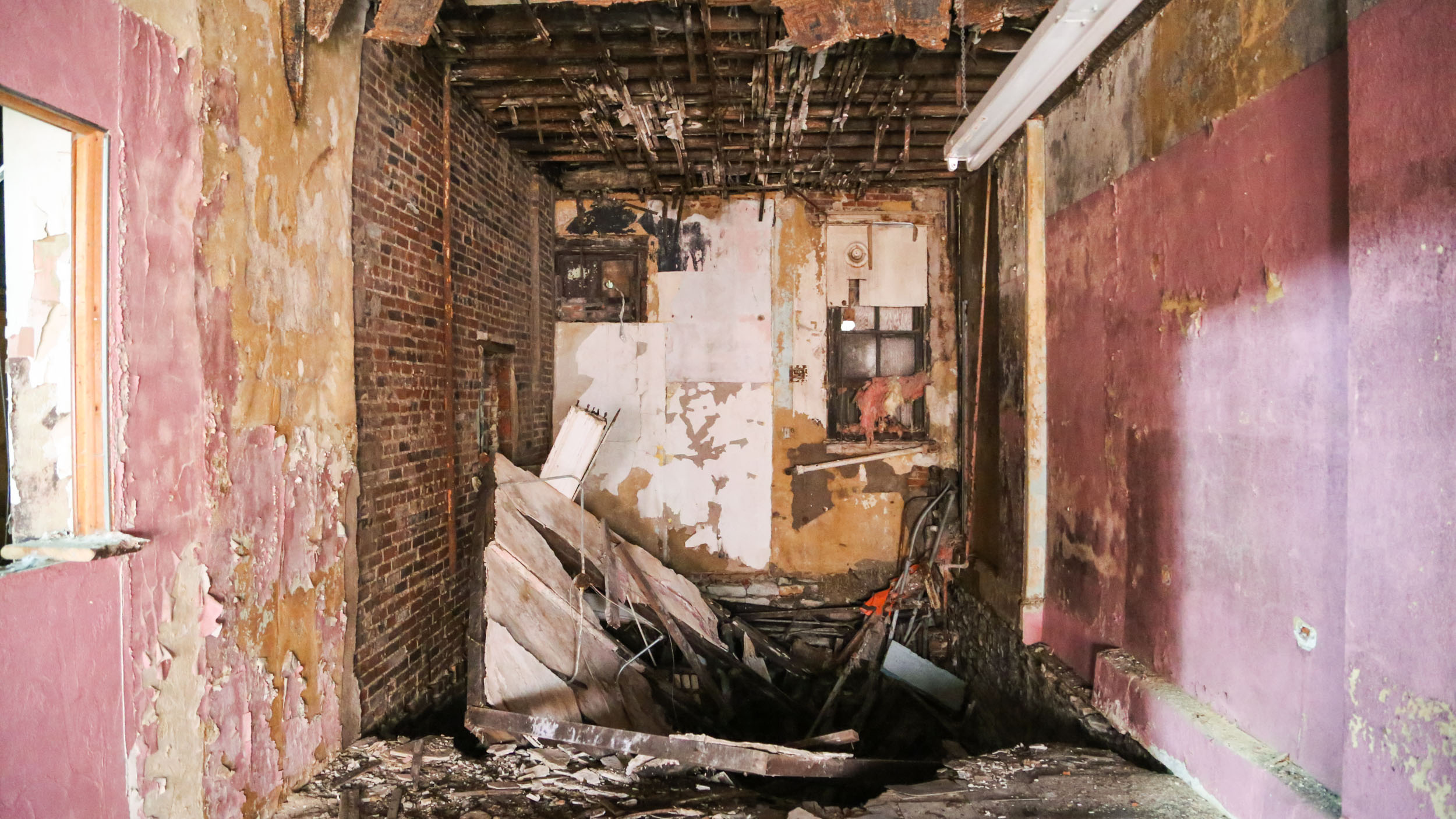 Interior demolition and stabilization of the property began in February and is now complete. A building permit was applied for last week.

Three of the seven residential units will be rent restricted and reserved for households with incomes at or below 60 percent of the average median income for the area. A 2-bedroom unit on the first floor will be accessible. The Energy Star rated development will have high-efficiency appliances, a washer/dryer in each apartment and interior bike storage on the first floor.

The developer is South Side Spaces. Jessica Deem of Virescent is the architect. The general contractor is Arcas with project management being performed by Artisan Building Company. Financing was provided by Busey Bank in conjunction with a $370,000 loan from the St. Louis Community Development Administration (“CDA”). The developer has applied for ten years of tax abatement. As a contributing resource to the Gravois-Jefferson Streetcar Suburb Historic District, the project will make use of state and federal historic tax credits. 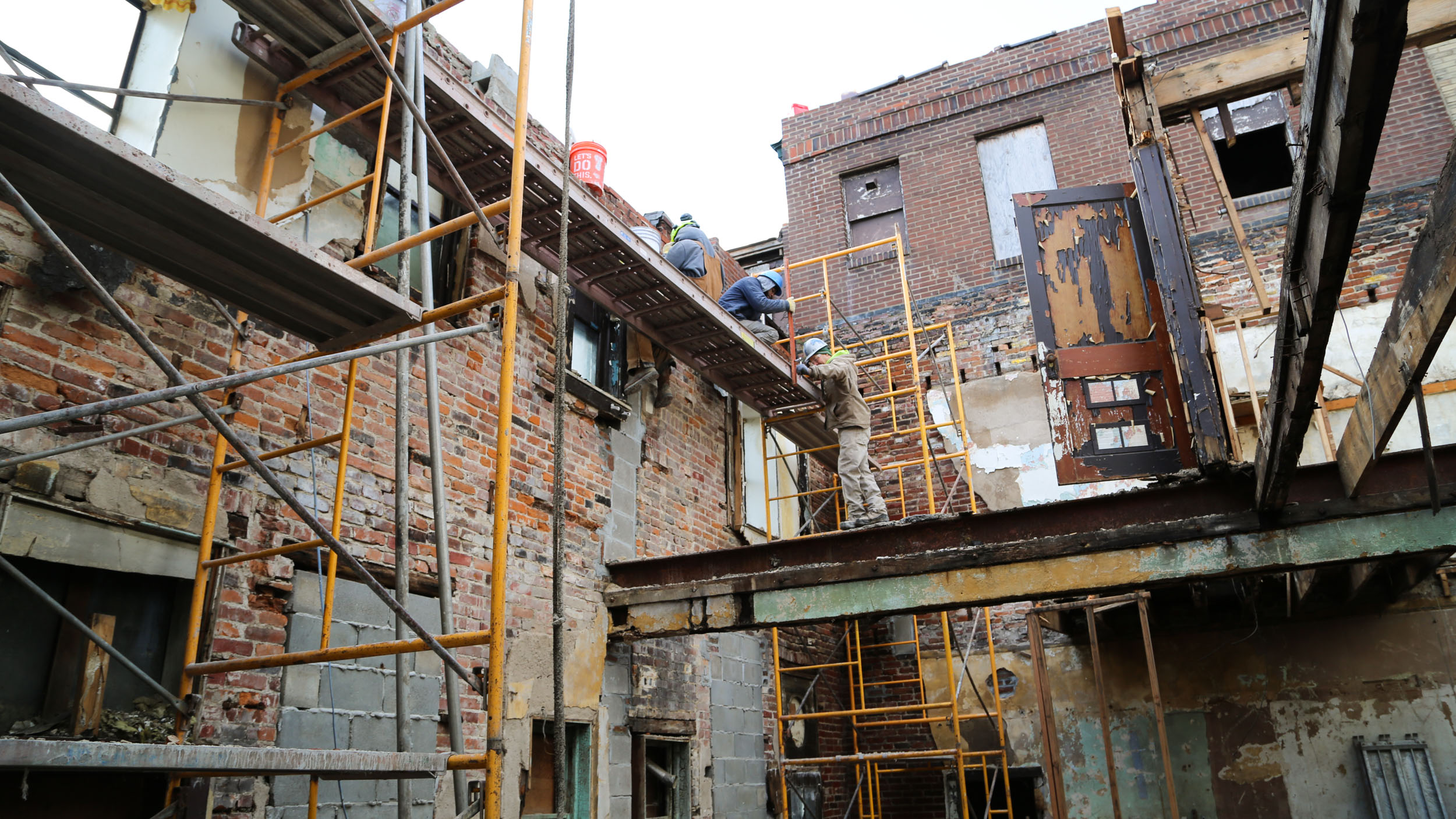 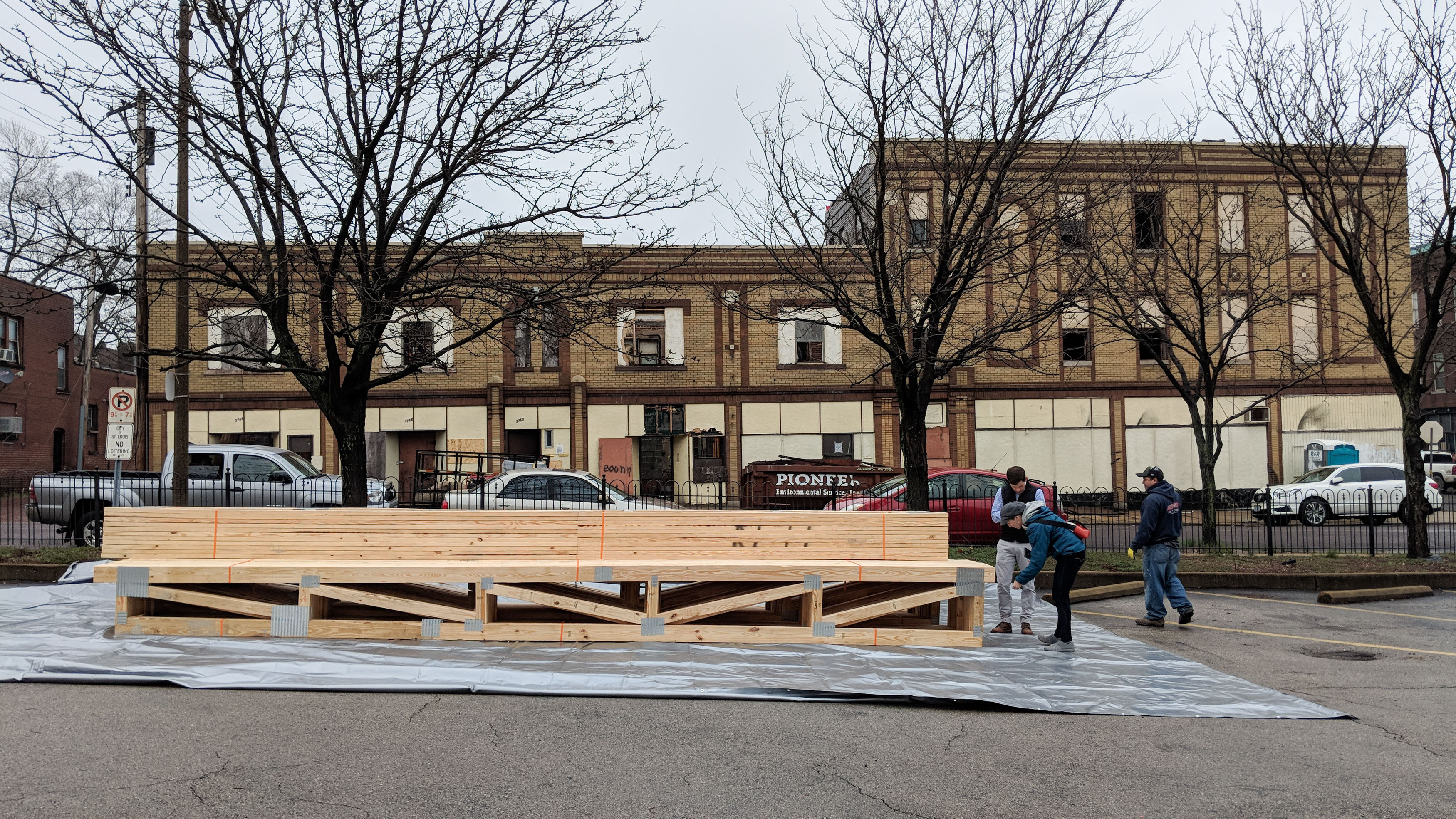 Editor’s Note: Jason Deem, the owner of South Side Spaces is also an owner of NextSTL.