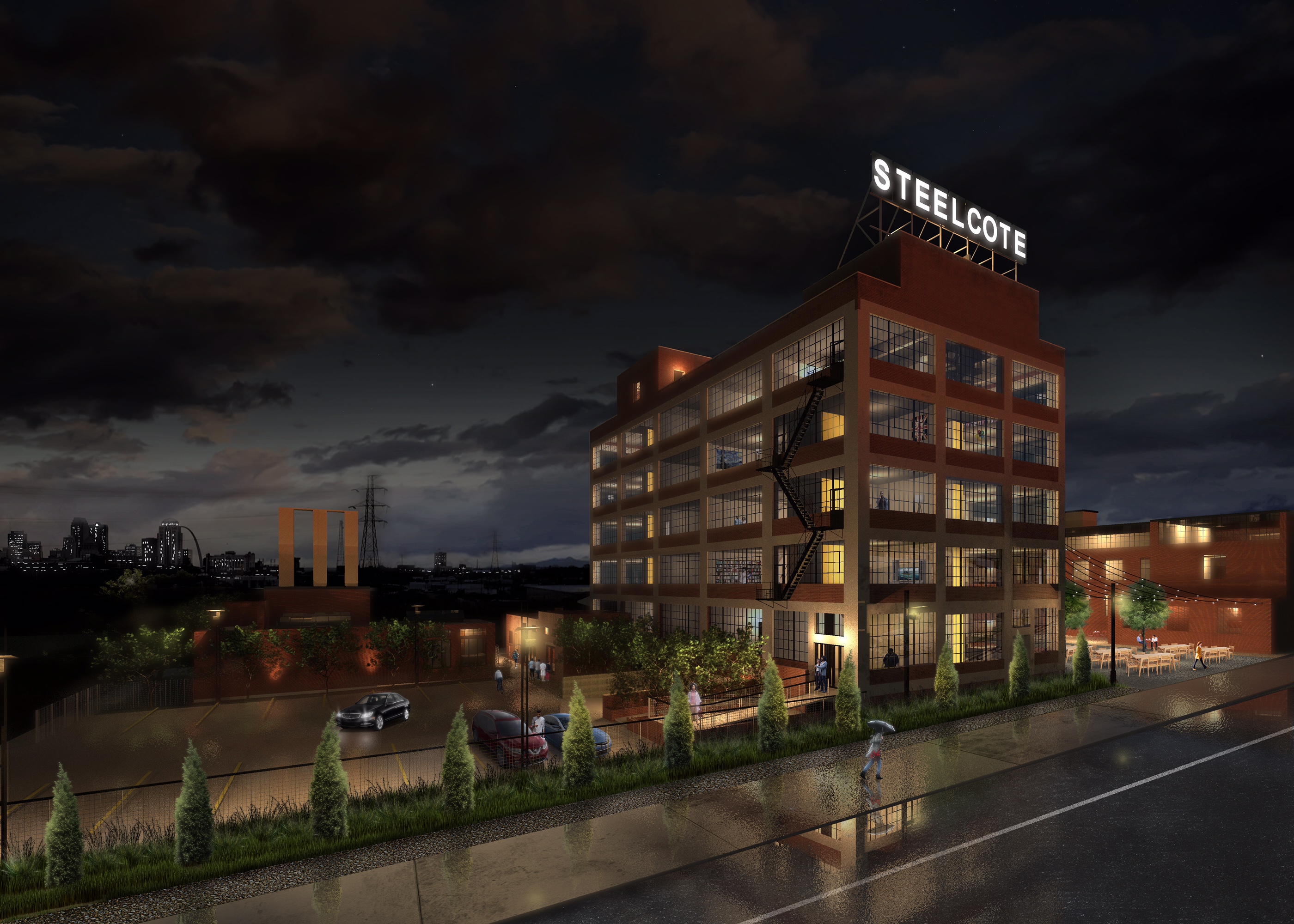 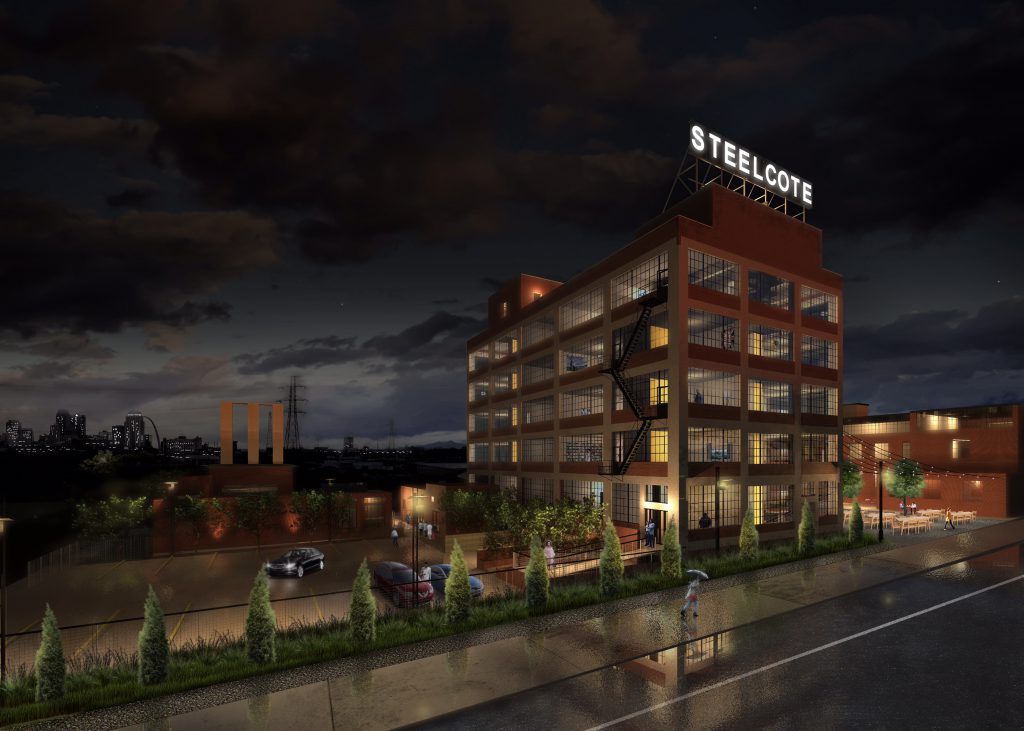 Hellmuth & Hellmuth’s historic Steelcote Manufacturing Company Paint Factory at 801 Edwin Avenue will become 32 market rate rental lofts, bringing new vitality to a neglected corner of St. Louis. Pier Property Group (PPG) has the property under contract and applied last week for a permit to rezone the property. The $8 million plan by Trivers Associates calls for a rooftop courtyard with 360° views of the city. Ceilings are 10 to 12 feet in height. Some units will be two levels and will include private rooftop decks. 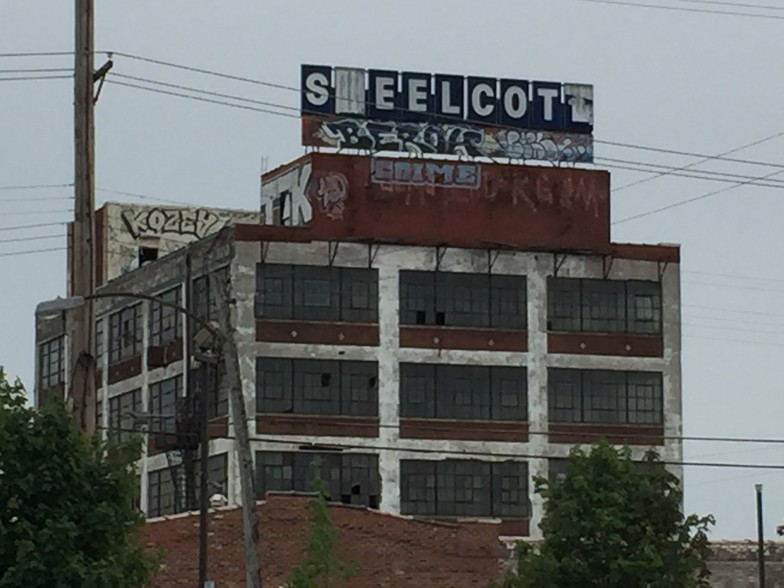 The developer is working on broader mixed-use plans for the neighborhood and has been working closely with the SLU Midtown Redevelopment Authority. The building lies in the Mill Creek Valley, once a densely populated industrial and residential area built atop the drained swamps of the Mill Creek. Today, it is an area of aging industrial buildings, empty lots and railyards between Highway 40 (I-64) and Chouteau. Bridges for Grand Blvd, Compton and Jefferson Avenues all pass over the Mill Creek Valley. Towering over the neighborhood at only five stories, the 64-foot Steelcote main factory building is visible from Highway 40. Nearby, SLU Hospital is investing $550 million in an 800,000 square foot campus redevelopment. 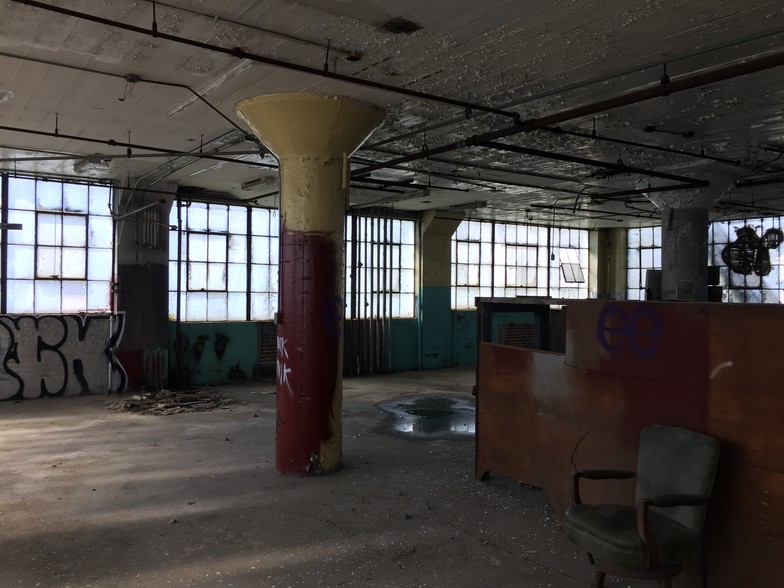 The 43,000 square foot building was listed on the National Register of Historic Places in 2007 and is eligible for state and federal historic tax credits. Early parts of the site date to 1922. The main factory building was built atop a floating concrete foundation due to the marshy ground condition and lack of bedrock. Built first as a three-story building in 1924, it was expanded vertically by two levels in 1929. The utilitarian design used an exposed concrete structure on all four sides. Steel windows and non-structural inset brick knee-high walls fill the exterior voids within that concrete grid. 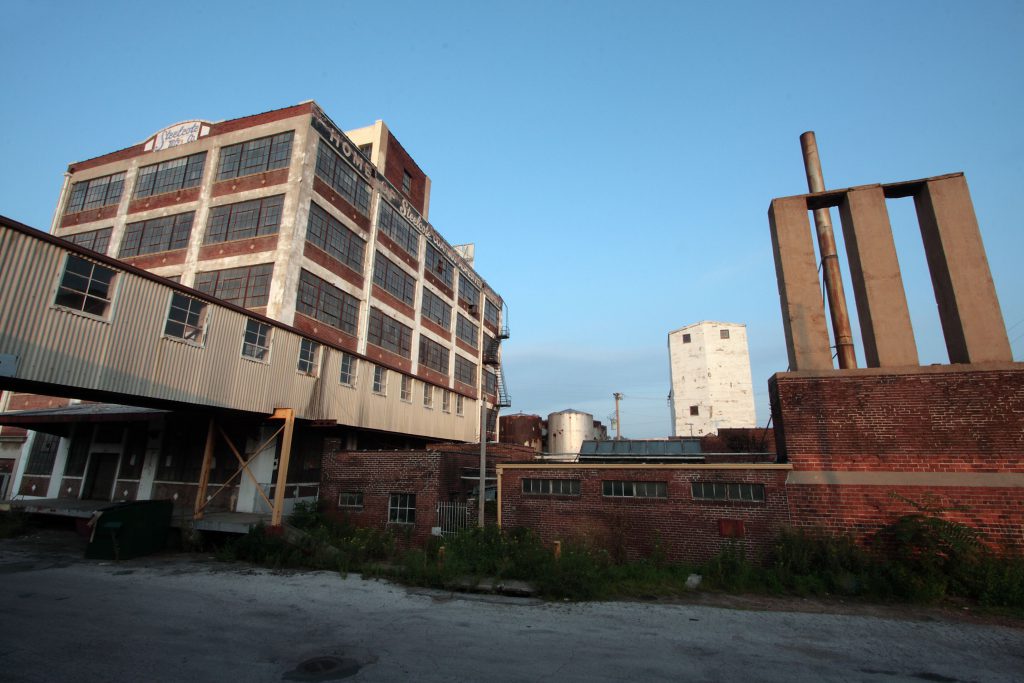 The architectural firm of Hellmuth & Hellmuth designed the building. George Hellmuth was a Christian Brothers College graduate with offices in the Chemical Building. His younger brother Harry joined his office in 1900, becoming a partner in 1911. Hellmuth & Hellmuth were among the city’s most respected architects, designing gilded age mansions on Portland and Kingsbury Places, public and mercantile buildings throughout the city, as well as the Chapel of the Sacred Heart Academy in the Central West End — long ago replaced by the suburban West End Terrace Apartments. George’s son — also a George Hellmuth — had worked with him and uncle Harry long before becoming a founding partner in the international architectural firm HOK. 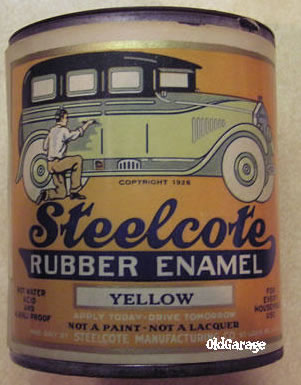 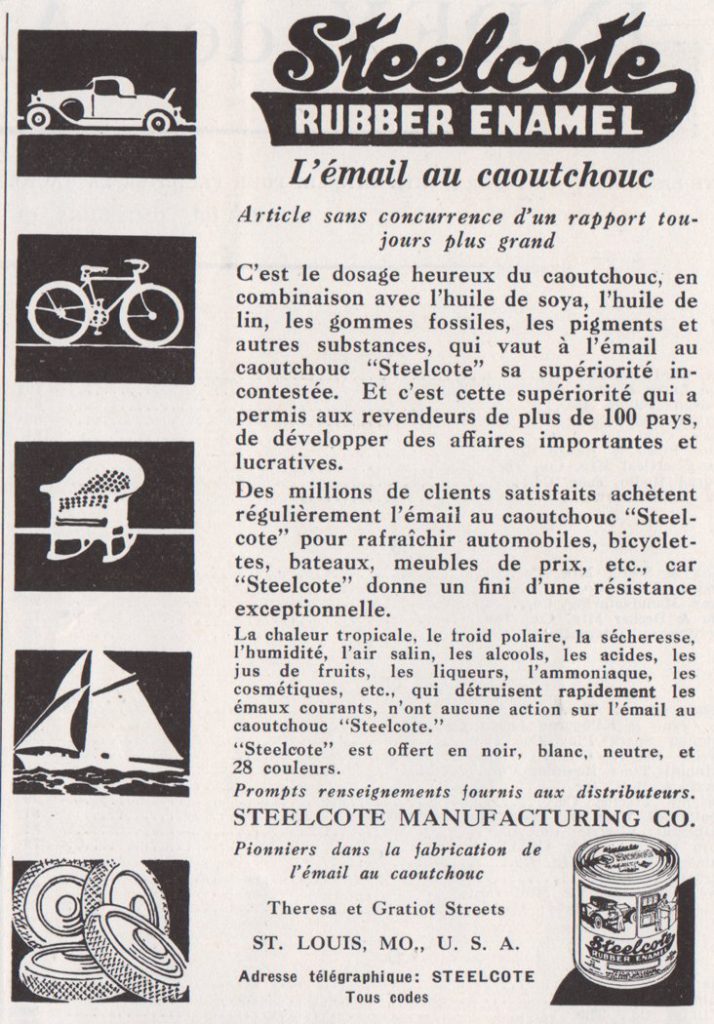 The Steelcote building has been vacant for over a decade. At one point listed for $1.2 million, it more recently was listed for $495,000. Terms of the sale have not been disclosed. A 1964 company advertisement shows A six-building complex north of Chouteau. The buildings to the east across Edwin are not included in the current project. 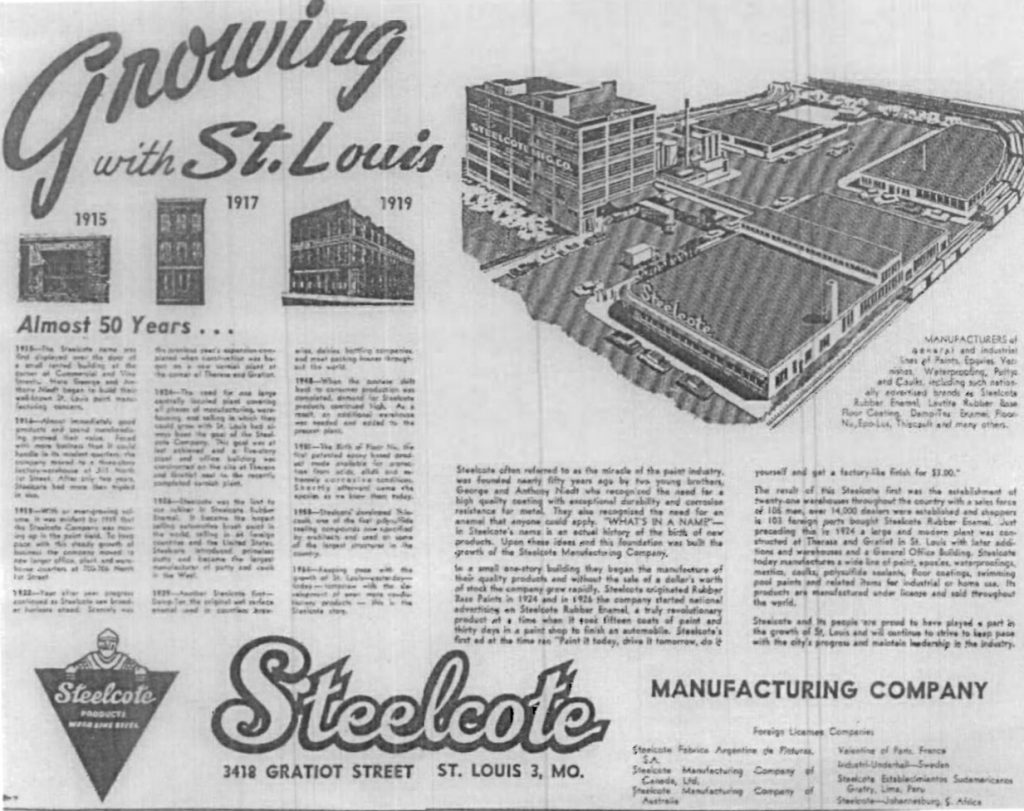 The current plan reverses an earlier recommendation that the building be demolished. Because of the poor state of the building and surrounding infrastructure, the November 2016 St. Louis Midtown 353 Redevelopment Plan had slated the property for likely demolition followed by non-residential new construction. The current project improves greatly on that recommendation, preserving and repurposing the building for residential lofts. And while that 353 Redevelopment Plan authorized only 10 years of tax abatement for most development south of Chouteau, it authorized the redevelopment corporation to grant up to a maximum of 25 years of tax abatement for properties in Mill Creek Valley north of Chouteau. PPG has begun the application process, but awards have not yet been made. 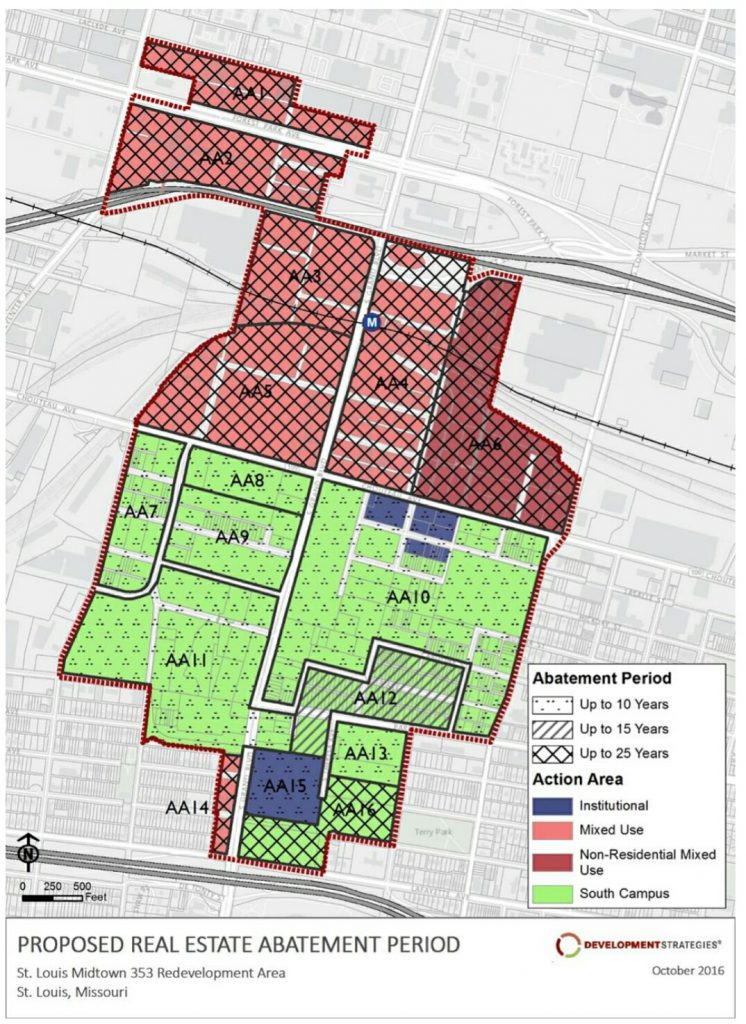 The project includes structured parking for 15 cars plus 25 surface spaces. The developer plans to close on the property this Spring. Construction is expected to take eight months. Michael Hamburg, PPG’s Founder, says he feels that “SLU is in a very unique position for expansion, with the new hospital representing just one component, and we are excited to continue being a part of the revitalization Midtown is undergoing.”

Pier Property Group currently is renovating the old Suburban Packaging building at Vandeventer and Tower Grove into The 164-unit Woodward Lofts. PPG describes itself as a private real estate company focused on the acquisition, renovation, and management of historic buildings. Pier specializes in using public/private partnerships and creative financing to preserve underutilized structures through adaptive reuse.