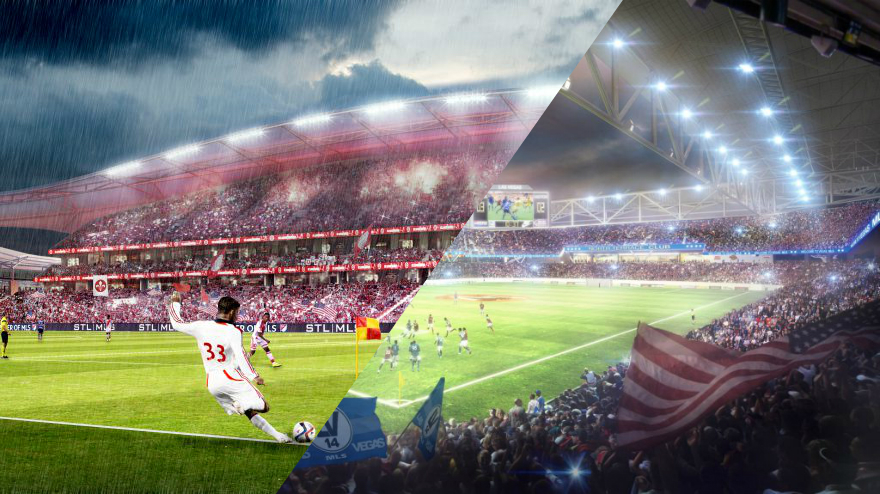 As St. Louis awaits a possible Plan B to become a Major League Soccer city, Cincinnati is squarely aimed at Plan A. There are a dozen cities hoping to become an MLS city, but no two are quite so similar to one another as the Queen City and the Gateway to the West. Of course, they are also the two with which I am most familiar.

Prospective ownership groups in each city have followed a similar road. Saint Louis FC was founded in 2014, FC Cincinnati, 2015. Both play in the USL. However, Saint Louis plays in a 5,500-seat suburban industrial park stadium. Cincinnati plays at the University of Cincinnati’s Nippert Stadium, a top-tier 35,000-seat college football stadium, about two miles from downtown.

While enjoying similar on-field success, Cincinnati has set the USL attendance record several times, most recently against Orlando City B at 24,376. An exhibition game against Crystal Palace drew 35,061. Larger crowds have witnessed soccer at Busch Stadium and the Edward Jones Dome in St. Louis, though those matches didn’t involve Saint Louis FC. Whether due to circumstances or planning, Cincinnati has clearly established a following not enjoyed by Saint Louis. One must assume that this matters when asking for public money.

St. Louis is on to Plan B because a vote to support an MLS expansion bid by a group led by Saint Louis FC CEO Jim Kavanaugh, fell a few percentage points short (47/53 or 3,300 votes) of committing $60M toward a stadium. Only St. Louis City voters were asked to vote on a contribution of public money. The prospective ownership group spent $1.18M on that effort.

Just getting the measure on the ballot saw plenty of drama and politics. The proposal eventually fought its way through the city’s 28-member legislative body, of which, only one represents the stadium site. Though not exactly a competing measure, voters weighed in on a transit and public safety tax as well. Its passage was required for the MLS funding to pass.

In Cincinnati, the expansion effort is being led by Carl Lindner III, CEO of FC Cincinnati. Where the St. Louis effort required bringing in a big outside investor to do the heavy financial lifting, the Cincinnati effort is locally led. For those in St. Louis, the Lindner family is to Cincinnati what a blended DeWitt and Taylor family would be to St. Louis.

And while the soccer fans in St. Louis know and appreciate the Kavanaugh name, and Dave Peacock, is well, someone everyone’s gotten to know through the NFL stadium effort, Mr. Lindner needs no introduction in Cincinnati. This gives the effort a different premise.

In St. Louis, the stadium was sold as an economic development tool. It promised 450 construction jobs and 428 permanent jobs. Perhaps St. Louis City voters had grown cynical after four professional sports stadiums didn’t revitalize the city, or their neighorhood. And it hasn’t just been stadiums, big project after big project has promised to alter the trajectory of the city. They haven’t.

In Cincinnati, there’s no expectation that the process will be fully democratic, but there’s a relatively huge engaged fan base that expects to be involved. In fact, season ticket holders will be presented with an “innovative” stadium design by Dan Mies at a June 12 event.

Mies previously designed a pro soccer stadium for the Las Vegas effort. Architectural design may be subjective, but Mies’s Vegas design is better than the HOK effort in St. Louis (top image). While they may be getting the design/site process a little backward, three potential stadium locations are being publicly debated, if not publicly decided. The process has a different feel. 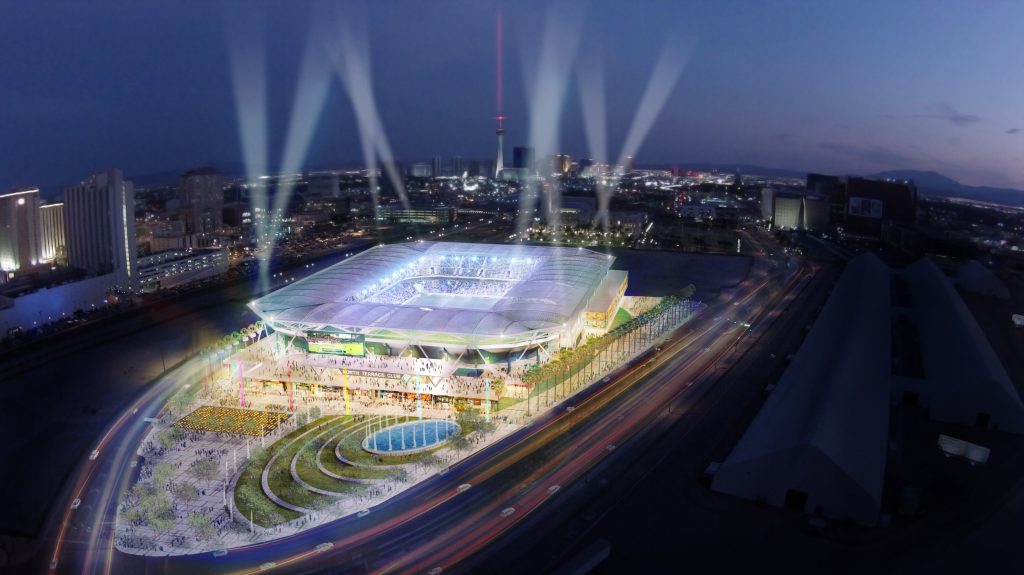 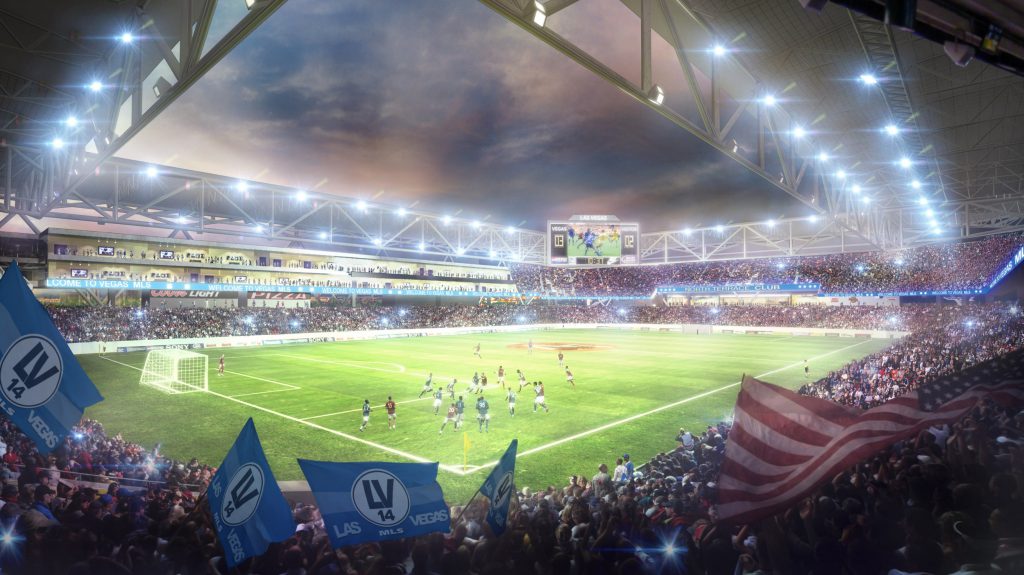 But what matters, what is clear, is that the MLS wants what’s best for the MLS. While the league may very well want to be in St. Louis, whether or not that happens is up to a prospective ownership group. An expansion franchise depends on a stadium deal, with or without public money.

Again, the parallels here between St. Louis and Cincinnati are significant. Both ownership groups have touted $250M in private investment and a $200M stadium. However, the St. Louis group stumbled on the MLS expansion fee, publicly penciling in $200M, then not adjusting the public ask when the fee was confirmed at $150M. The public vote in St. Louis was rushed, as such things are done.

The contortions may only be beginning in Cincinnati, and a public ask in some form is coming. A new pledge from the prospective ownership group of no new tax increase has been made, leaving the source of public funds unanswered. The best guess is that the group is targeting a current tax that funds the NFL Bengal’s Paul Brown Stadium. There could be other options.

Both cities have had painful NFL stadium deals, with Cincinnati (Hamilton County) owning perhaps the worst deal ever made. That said, there is still an NFL team in Cincinnati. And that is likely because Cincinnati is in Hamilton County. (Sidenote: while St. Louis City owns Scottrade, home of the NHL Blues, US Bank Arena in Cincinnati is privately owned, and is currently in a stalemate as political leadership has clearly stated no public funds will be used in its needed renovation)

Hamilton County has lost near 13% of its peak 1970 population over the past 40 years. Over the same period, a combined St. Louis City and County lost 16%. These are very similar places, save the political fragmentation.

Ultimately, regional political fragmentation pitted St. Louis County against St. Louis City. The work required to adequately address multiple political constituencies wasn’t completed. Shortcuts were taken. It’s quite easy to imagine that is the April vote in St. Louis had been put to St. Louis City and County voters, the outcome would have been different.

It’s not clear if Hamilton County voters will be asked to sign off on public money, or if the mayor and city council (which consists of nine members, each elected at-large, that is, they each represent the entire city and not a ward or district) could approve funding. Of course, the Cincinnati effort may still stall, but on the ground here, it doesn’t feel that way.