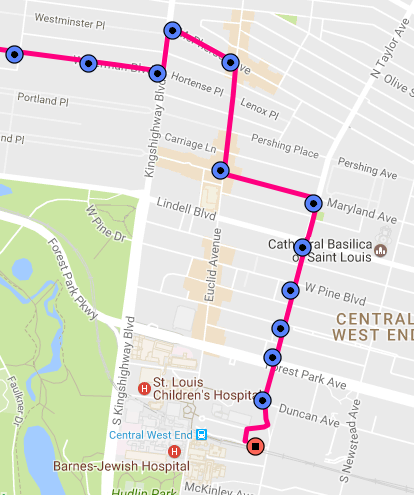 Transit works best when it delivers you to and takes you from the middle of things instead of the edge of things (for example Metrolink in Clayton missed the mark by not putting the station at Central and Forsyth). The Central West End has been the region’s premiere walkable neighborhood for quite some time and has been getting even more walkable. A goal of development, as stated by Alderman Roddy, has been to create car-optional places. We see that in action on Euclid south of Lindell. That’s why it’s regrettable that there is no longer bus service on that part of Euclid.

I asked about it on Metro’s monthly live chat. The #1 bus used to run down Euclid. The route changed due to all the construction. I figured it would return after the Orion and Citizen Park were done. Apparently not. Ray Friem, Executive Director of Metro Transit said,
at this time, Metro does not plan to return the routing of the #1 Gold to its former routing on Euclid. There is considerable difficulty obtaining space for bus stops, and the narrow streets and heavy traffic make bus operations difficult. Instead, Metro is providing service on Taylor.

I say bunk. Catching a bus on Taylor (which is served by the #18) adds at least a 1000 feet (the length of blocks in St. Louis is a whole other problem!) to reach a bus stop from Euclid. Not a burden a transit agency interested in boosting ridership would place on potential riders. Discouraging bus ridership only worsens traffic. It’s safer to walk to a stop and wait on Euclid where there are more eyes on the street than Taylor. Euclid is just as narrow there as it is north of Lindell where it continues to run. There are many obvious places for bus stops. There are several curb bump-outs that could be used. 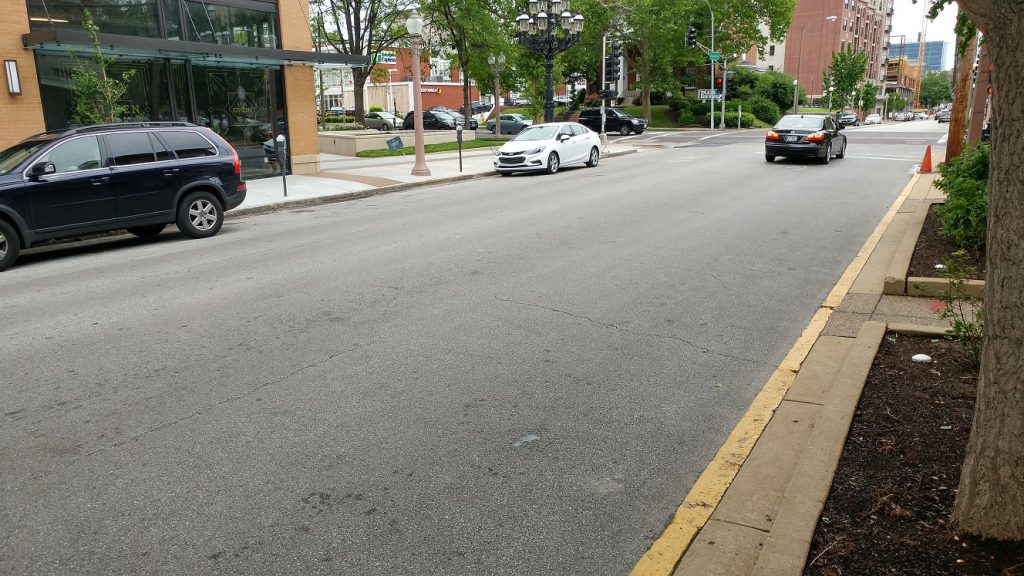 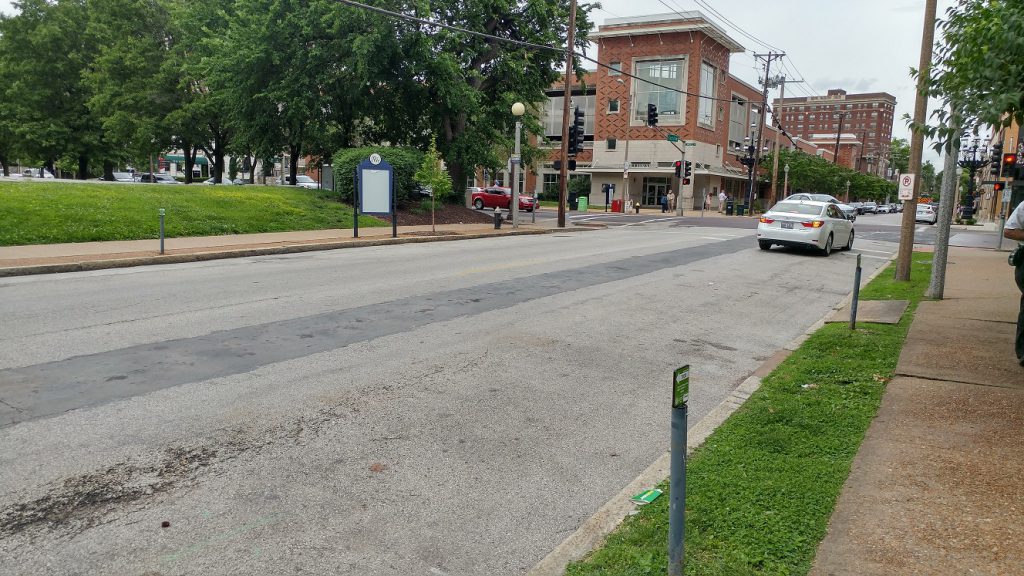 Euclid south of Lindell. The WB #1 could stop here if immediately north of Lindell is a no go. 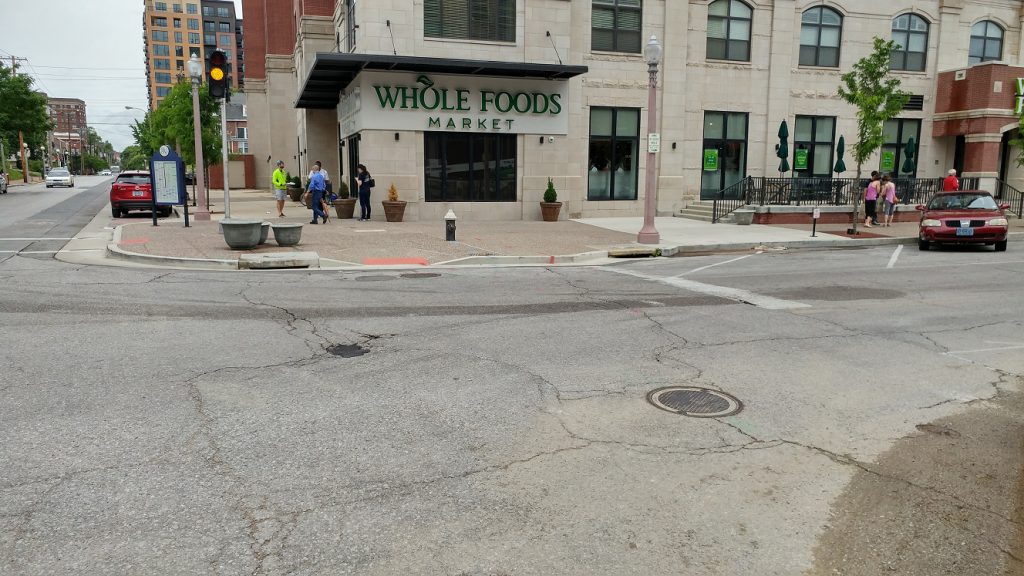 The WB #1 used to stop in front of what is now the Orion. If that’s too hard it could use Laclede instead of West Pine to reach Euclid from Taylor. 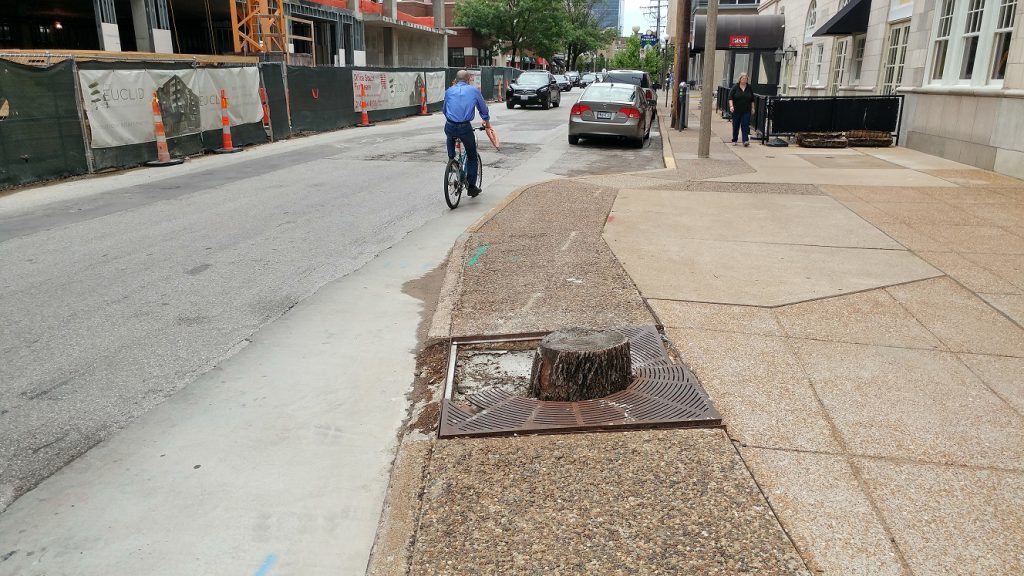 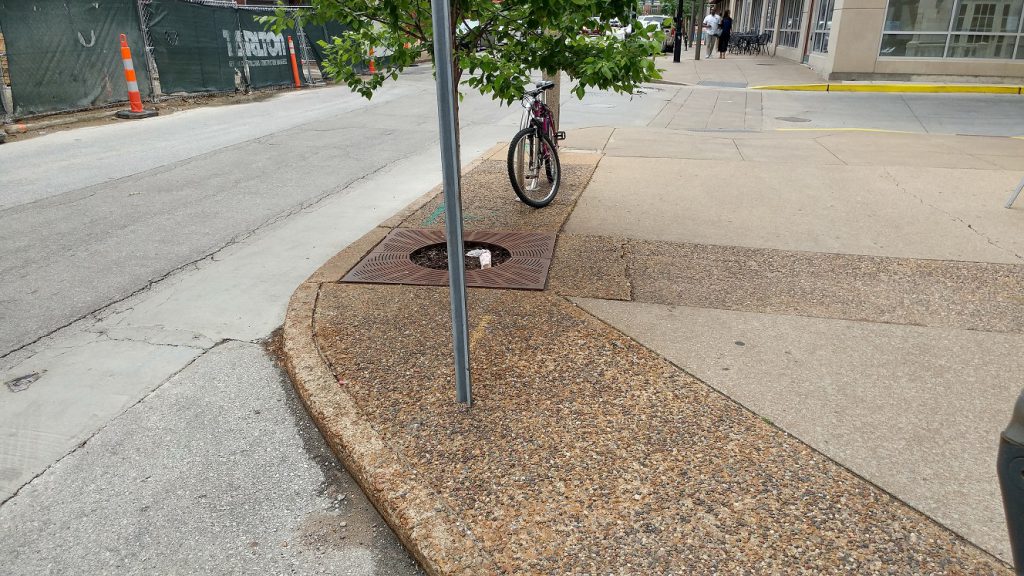 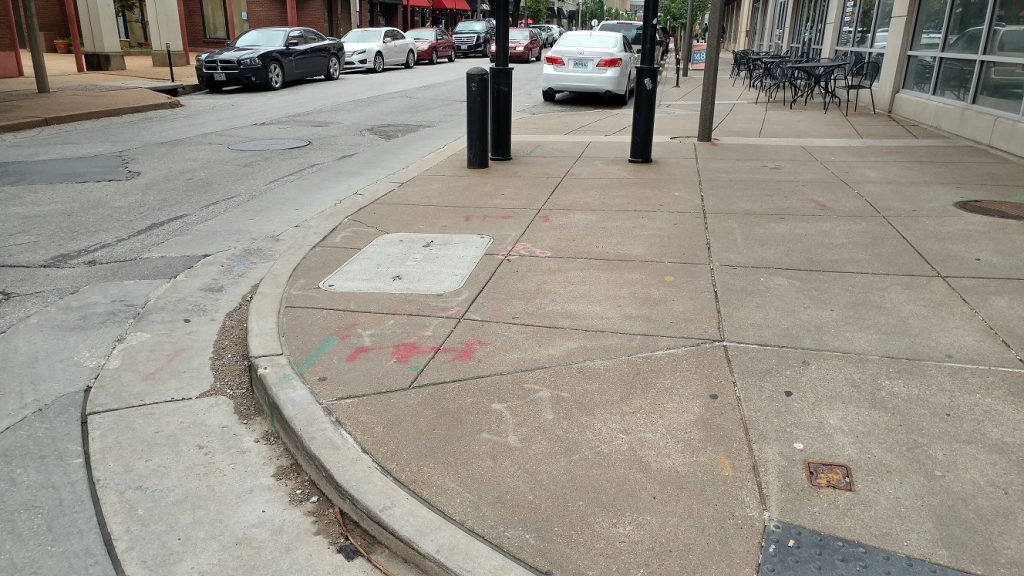 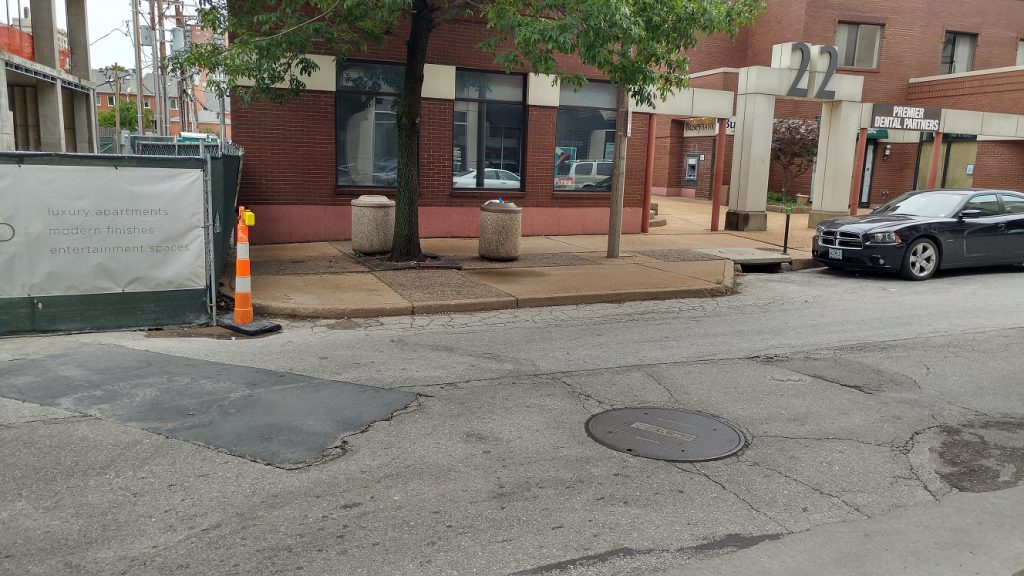 There are curb bump-outs mid block between West Pine and Laclede that could be bus stops. 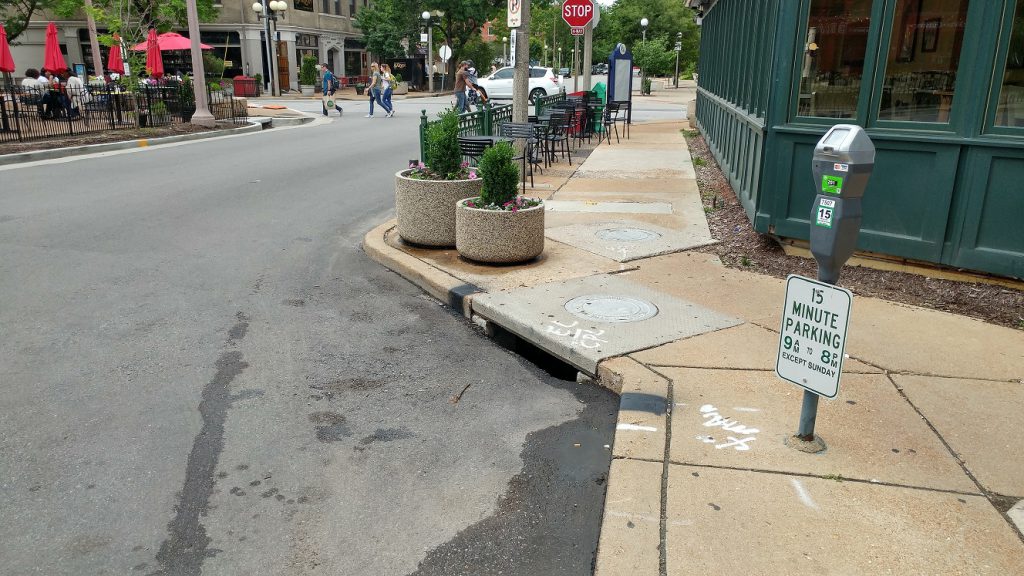 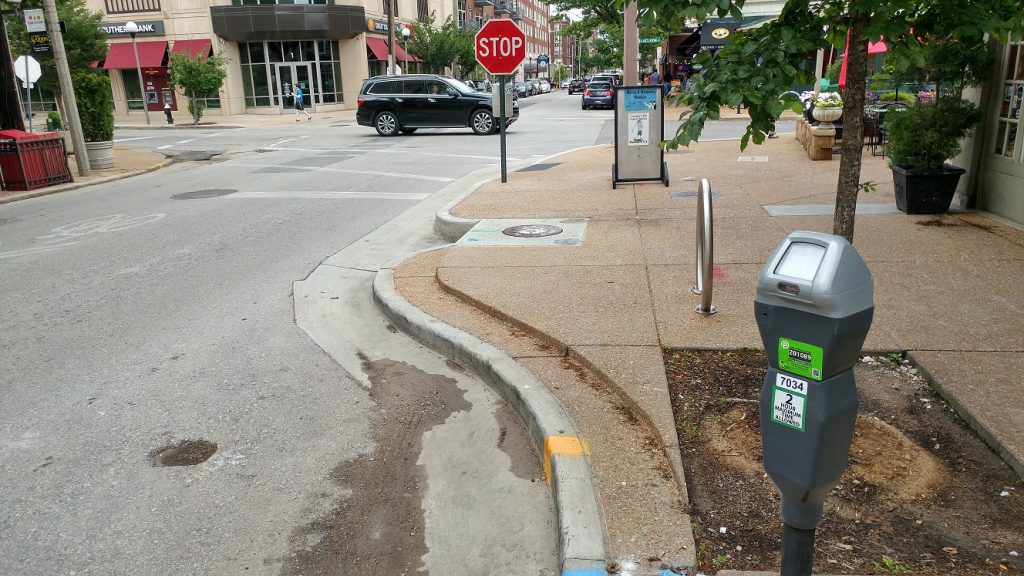 Curb bump-outs could be stops for the WB #1 if coming up Euclid from Forest Park Ave or coming west on Laclede. Or put stops on Forest Park Ave that are shared with the 10 and 95. 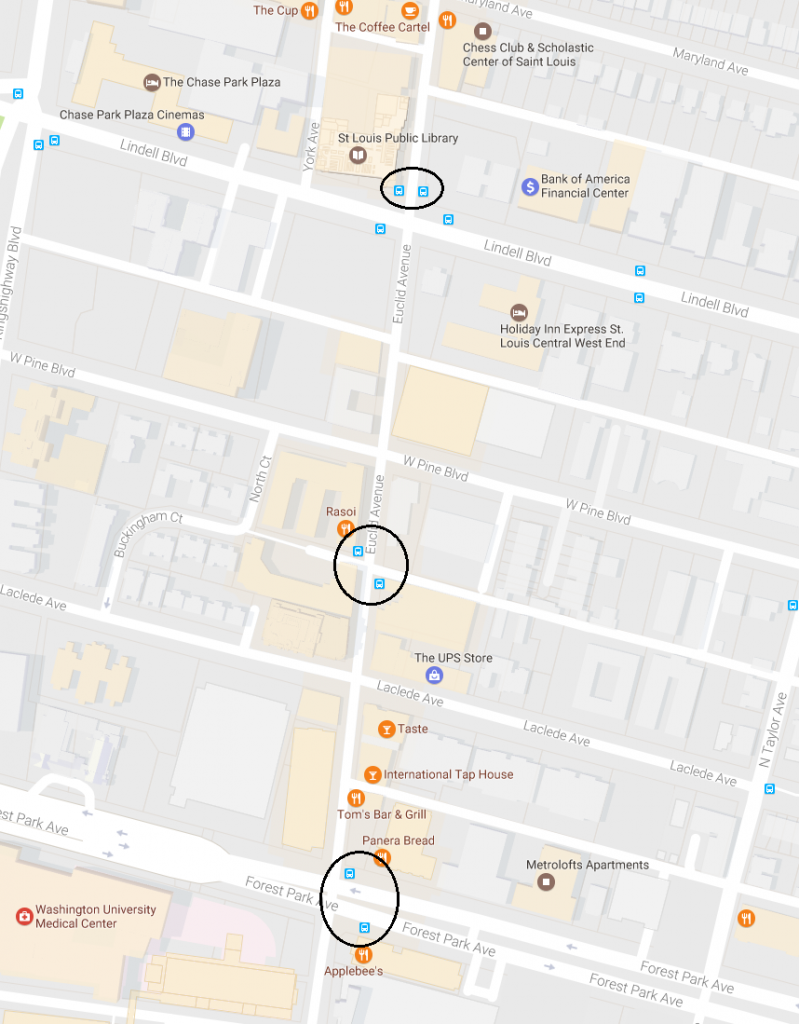 How about three sets of bus stops? Why do we make this so hard?