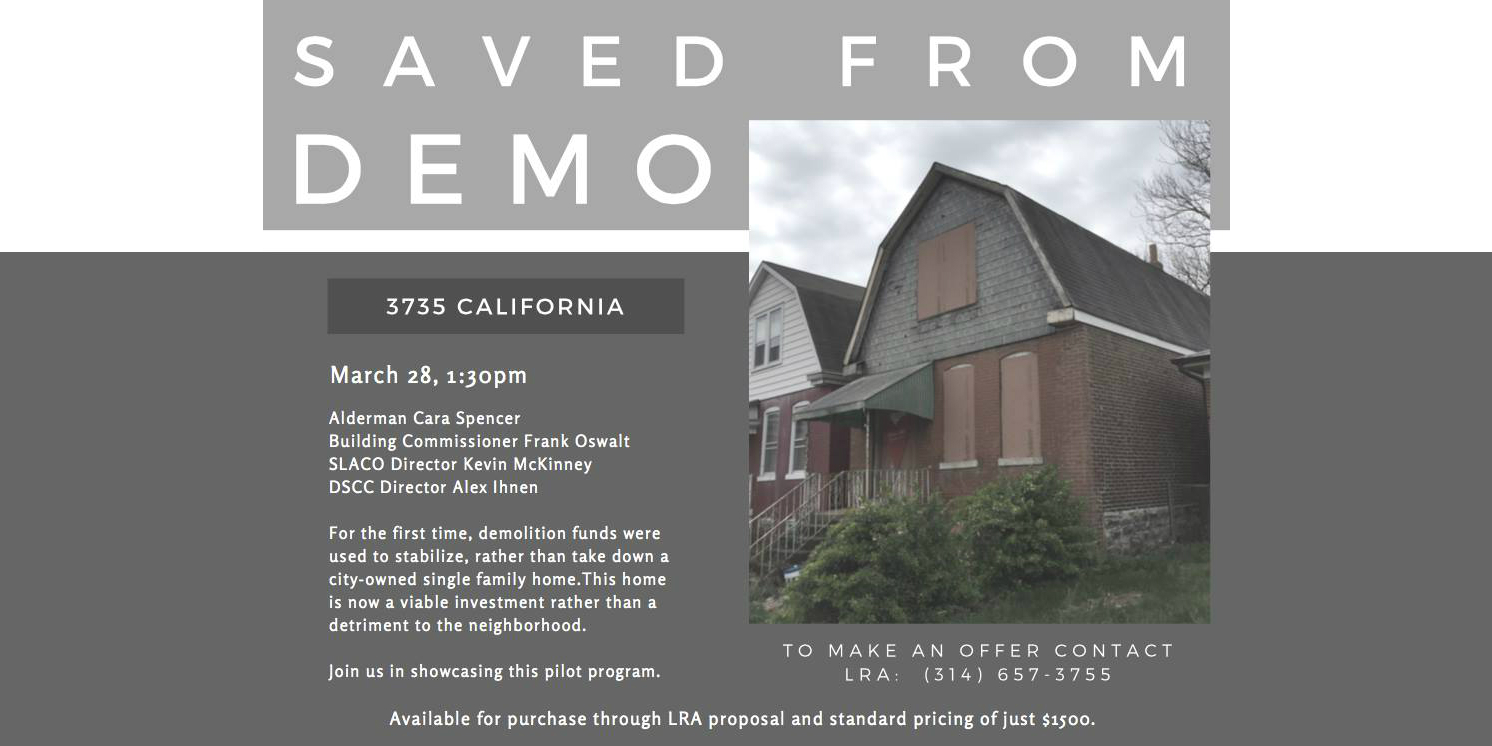 Vacancy is part of the St. Louis narrative, whether we like it or not. Overwhelming vacancy is the identity of North St. Louis. Vacant buildings greet residents and visitors along our central corridor. Vacancy is significant and growing on the city’s south side, which lost the same number of residents as the north side last decade.

But we can change this narrative. The story of a city is never more than just partly true. Is Portland overrun by $9 coffee and fixies? Sorta. Is Columbus a “smart city” that has avoided rust belt issues? Kinda. Are “makers” moving to Detroit and resurrecting manufacturing? You get the idea.

Anyway, St. Louis doesn’t care (Want to be charitable? St. Louis hasn’t been able to care…) about vacant buildings. Caring requires energy, ideas, commitment, and yes, funding. One such idea was on display in the city’s Gravois Park neighborhood. I was on hand representing the Dutchtown South Community Corporation as 20th Ward Alderwoman Cara Spencer explained the investment. 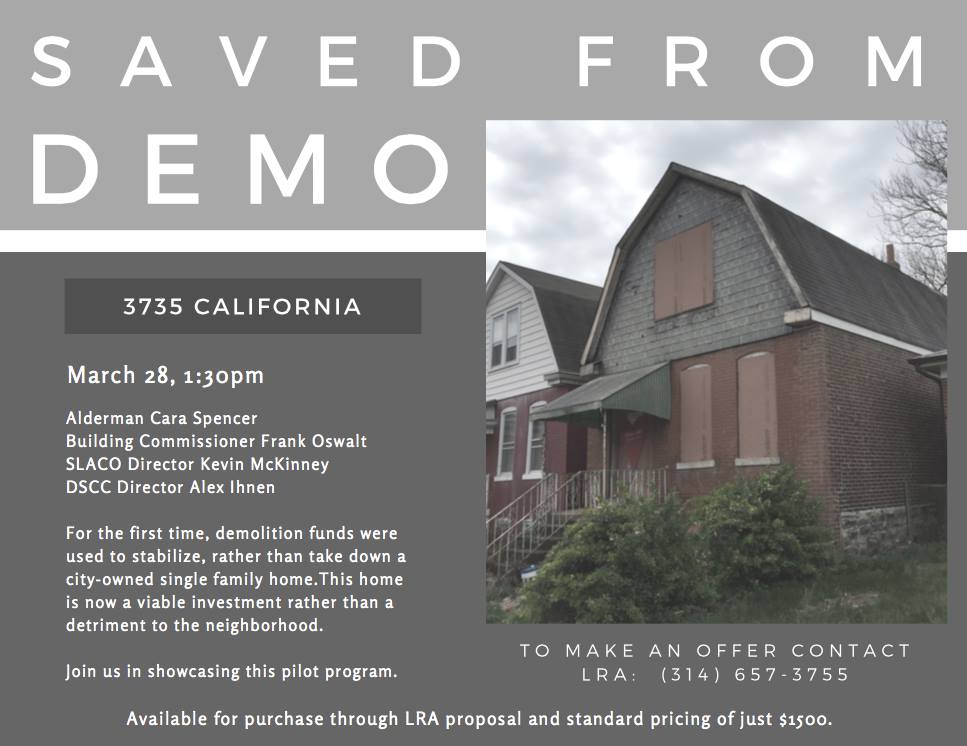 In short, for the first time, city demolition funds were used to stabilize a building in an area of increasing investment. Instead of $10,000 spent on demolition, approximately $15,000 was spent to stabilize the home and preserve its potential value. Will the building see a new buyer and attract investment? Maybe. Hopefully. Probably? But I see the value of this effort as something more.

St. Louis hasn’t cared about vacancy, and clearly hasn’t appeared to care about vacancy. Caring about vacancy hasn’t been part of our city’s narrative. Whether one building, 10 buildings, or 100 buildings are stabilized, the act of employing a new idea, a new effort, of not simply allowing yet another building to be demolished, is incredibly valuable. Perhaps we can care about vacancy.

Of course all the city’s demolition funds won’t go to stabilizing buildings. Plywood won’t be removed and replaced by plexiglass on all vacant buildings. But these are proactive statements that demonstrate to others, and ourselves, that we care, that the issue will not be ignored, that we’re not devoid of ideas.

If ideas are welcome, what else will we come up with? How else can vacancy be addressed? What if we empower residents and others to find solutions? What if they do it because they know new ideas are supported? What is someone moves to St. Louis because they know it’s a place that cares and is willing to try new things to address old problems?

The big vacant eyesores are slowly going away along the central corridor. Tax incentives will bring The Armory and City Foundry back to life, and Cortex and Saint Louis University development will change the face of that part of our city. But vacancy isn’t simply an old problem, its a growing problem. It is perhaps most apparent in St. Louis City, but St. Louis County must also act now if it hopes to have an impact on the growing challenge. Perhaps Prop NS and other ideas can provide a template for the region.

So what does this have to do with Prop NS? NS is for “Neighborhood Stabilization”, and Prop NS would approve a bond initiative that would fund stabilization of city-owned buildings. You can read all about Prop NS and why your “Yes” vote is important in this NEXT STL Op-Ed by Michael Powers.

In addition, Prop NS supporters are demonstrating a strategy called Clearboarding today at 3600 South Jefferson. Clearboarding is being increasingly used to secure vacant buildings without the stigma attached to plywood boardups. The state of Ohio recently banned the use of plywood boardups on vacant buildings, and mortgage backer Fannie Mae has said it will help pay for clearboarding. The full press release on today’s demonstration can be found below. 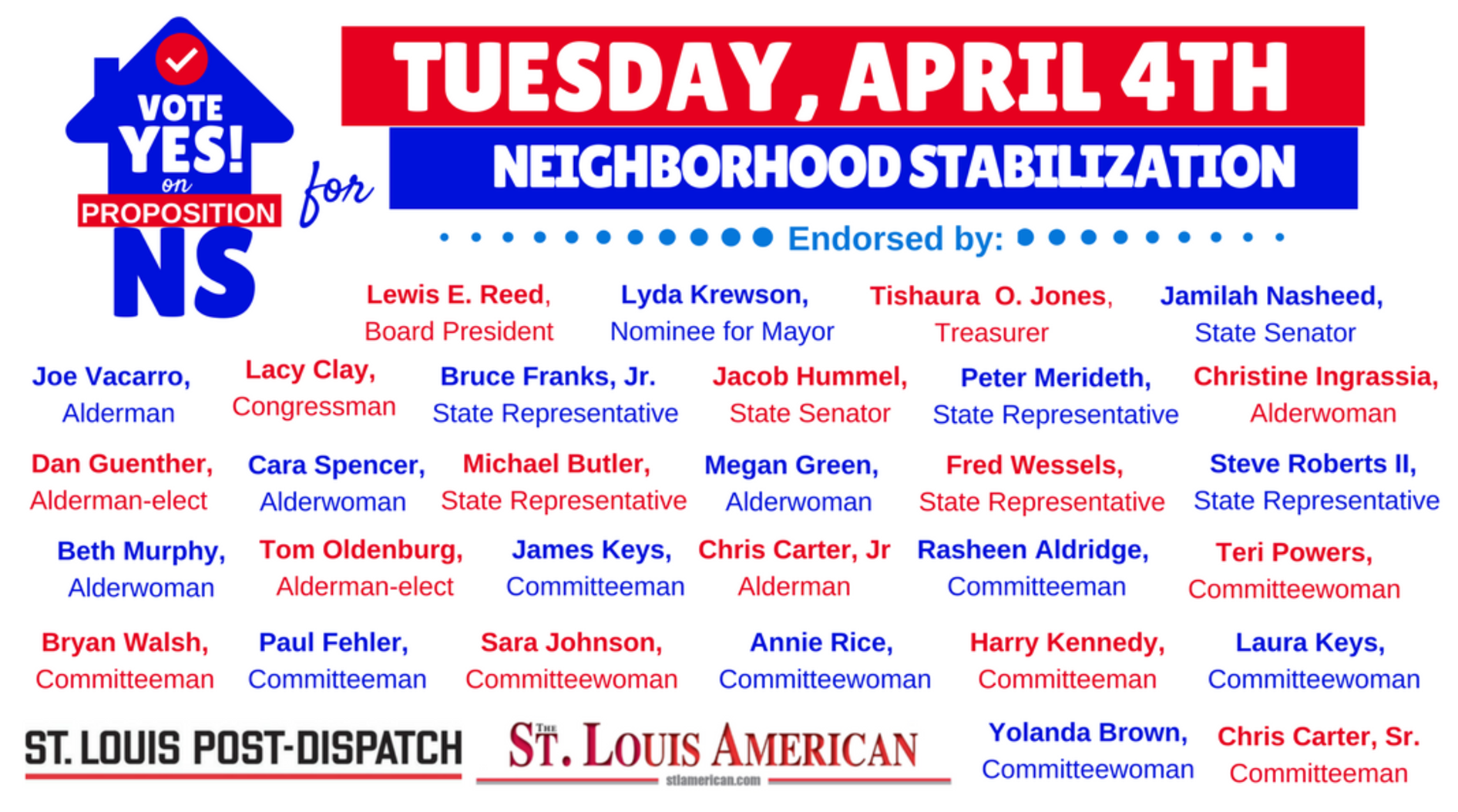 You can learn more about Prop NS and Clearboarding at the links below:

Discussing Proposition NS, which would raise funds to stabilize and market vacant buildings

Ohio Lawmakers Ban Use Of Plywood To Board Up Vacant Buildings

for vacant properties in lead up to April 4th vote.

Proposition NS, for “Neighborhood Stabilization,” is a bond initiative that creates a fund for stabilizing vacant city-owned buildings. It goes before voters on April 4th.  In the final days of the campaign, NS backers have teamed up with Cleveland, Ohio based SecureView to demonstrate to local officials, first responders and others a state-of-the-art technology to secure vacant and abandoned homes and reduce the visual impacts and public safety concerns related to blight.

SecureView has worked in communities across the country to “clear board” unoccupied properties, replacing warped and worn plywood with a see-through product that resembles a window, but is virtually indestructible.

Robert Klein, founder and chairman of SecureView and a national expert in the property preservation industry, describes his company’s product as “a practical and attractive alternative to plywood for boarding.” The clear polycarbonate boarding prevents vacant and abandoned properties from becoming eyesores that further reduce surrounding property values and scare off potential investment in neighborhoods and business districts.

The Monday morning event will both highlight the visual impacts of replacing plywood on a storefront and demonstrate the strength of the product in protecting from intrusion by vandals. St. Louis fire officials believe that by properly securing vacant buildings, the city can reduce the risk of fires and increase safety for first responders.

“For decades, plywood has been the standard material for boarding up vacant and abandoned buildings,” said Robert Klein. “But plywood has become the ugly and stigmatizing symbol of community blight, fueled by the foreclosure crisis of the Great Recession.”

Klein and others say plywood announces that a property is vacant and abandoned, sending a distress signal of a neighborhood in trouble.  “Replacing plywood with clear polycarbonate will secure the property so it can be rehabilitated and reverse the decline of our neighborhoods and the loss of more homes. This investment in the community is an important step that will lead to further neighborhood stabilization.”

Michael Powers, a member of Neighbors for a Stable St. Louis, the group running the Yes on Proposition NS campaign, says this demonstration is a part of an ongoing conversation about fighting vacancy in St. Louis. “Last year again our city lost 3,000 residents,” said Powers. “We have to begin rethinking how we deal with this pervasive issue and how we significantly reduce the negative impacts of vacant buildings on our neighborhoods.”

If passed, funds from Proposition NS would be available to tuckpoint, weatherize and stabilize vacant city-owned homes, of which there are some 2,800. Securing of properties with clear board up technology would be a qualified expenditure.