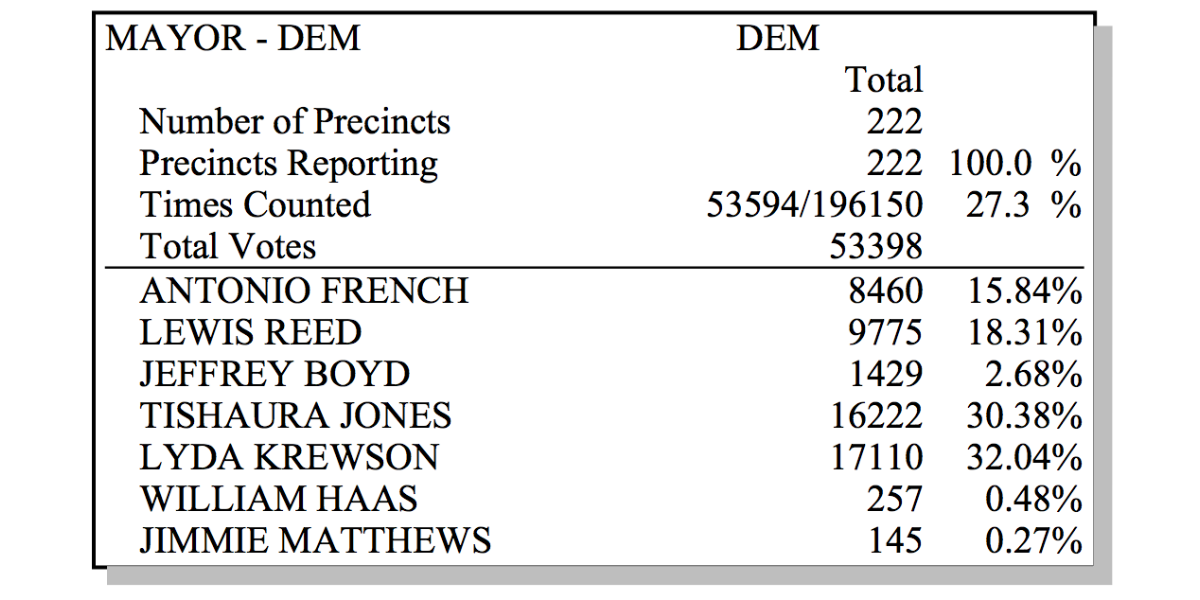 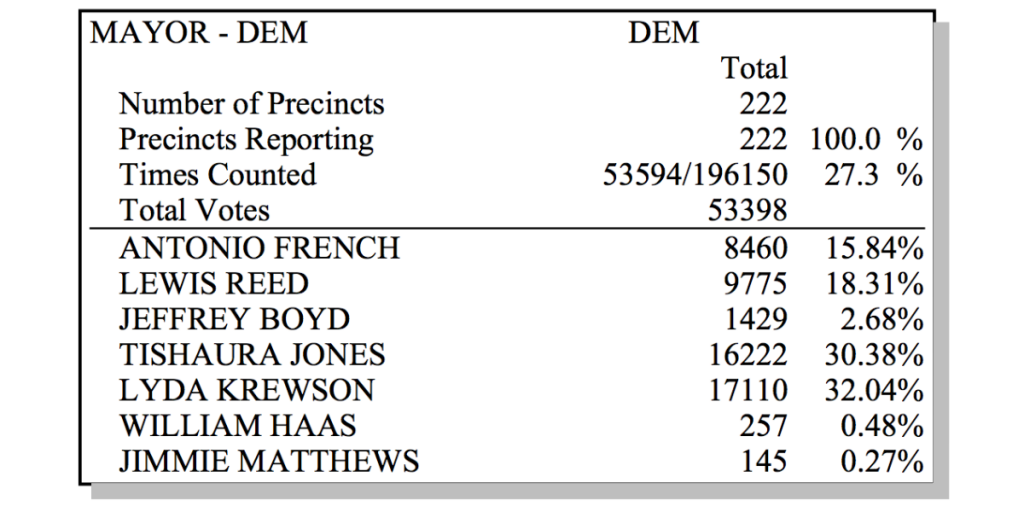 With her victory in the city’s Democratic mayoral primary, longtime 28th Ward Alderwoman Lyda Krewson has the inside track to becoming the next mayor of St. Louis. Traditionally, the winner of the Democratic primary coasts to victory in the April general election.

21st Ward Alderman Antonio French earned 15.84% with 8,460 votes, and 22nd Ward Alderman Jeffrey Boyd collected 2.68% and 1,429 votes. The tight margin is likely to foster further discussion of racial voting patterns in the city that is 49% African American and 44% white. Krewson was the only white candidate to mount a serious campaign, while Jones, Reed, French, and Boyd are all black.

The inevitable “what-ifs” may focus on race, but perhaps a larger discussion on the election process can occur. There are several options if there is a will to change the system. The city could go to a non-partisan mayoral contest, placing the more meaningful vote with the general election and not as a primary. The city could also adopt a run-off process where the two top vote getters in the primary face one another in the general. Or, if no candidate achieves 50% of the primary vote, a run-off occurs. There are options, though no one’s likely to get rich betting on the system changing soon.

Regardless, this is the process followed, and the machinations engaged in by the city’s dominant political party. While independent and other party challengers will be on the ballot in April, Krewson is nearly certain to become the next mayor, and first woman to hold that office in the city’s 253 years.

The city’s political system does not foster high-profile city-wide candidates. Alderman are elected to represent 1/28 or 3.6% of the city. They are rewarded for putting the interests of those approximately 10,000 people ahead of others when necessary. Aldermen often win office with a few hundred votes. In a less nefarious interpretation, aldermen are not rewarded for thinking and acting outside their ward.

Krewson has represented the city’s 28th ward since 1997, having been re-elected to the post five times. The neighborhoods on the 28th, Wydown-Skinker, Skinker-DeBaliviere, DeBaliviere Place, and the Central West End, have never been among the city’s most downtrodden, but it wasn’t long ago that the Chase Park Plaza was boarded up and vacant buildings were a common sight.

The area, with little vacancy, expensive rents, and significant new development, is considered by most to the city’s poshest district. Whatever role Krewson has played in the area’s increasing affluence, her new challenge will be to turn investment toward all city neighborhoods, examine the development incentives, and foster success elsewhere.

Hear mayoral frontrunner Krewson in her own words on NEXT STL’s Future Great City podcast:

Krewson, the chief financial officer of PGAV Architects, was first elected to the city’s Board of Aldermen in 1997 in a special election. She has been re-elected five times, more recently in 2015. The 28th Ward encompasses parts of the six city neighborhoods: Central West End, DeBaliviere Place, Hi-Pointe, Skinker-DeBaliviere, West End, and Wydown-Skinker.

Krewson earned an education degree from Truman State University, and an accounting degree from the University of Missouri-St. Louis. She is currently the Chair of the Transportation & Commerce Committee, and serves on the Airport Commission and Port Authority. 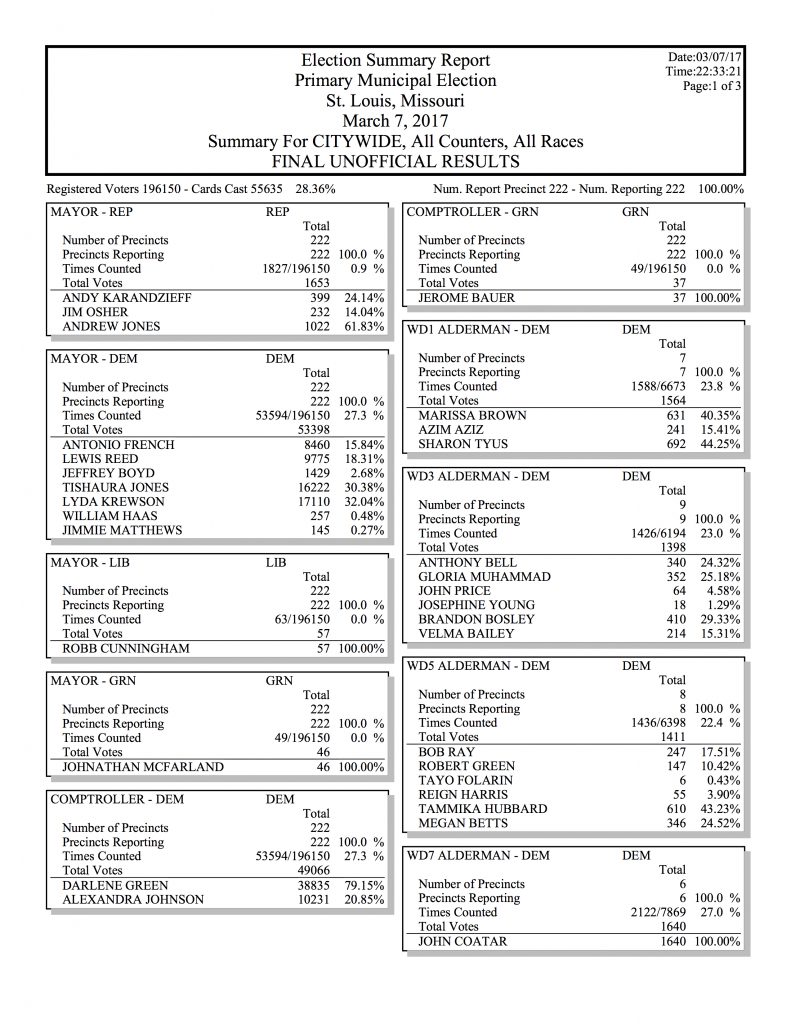 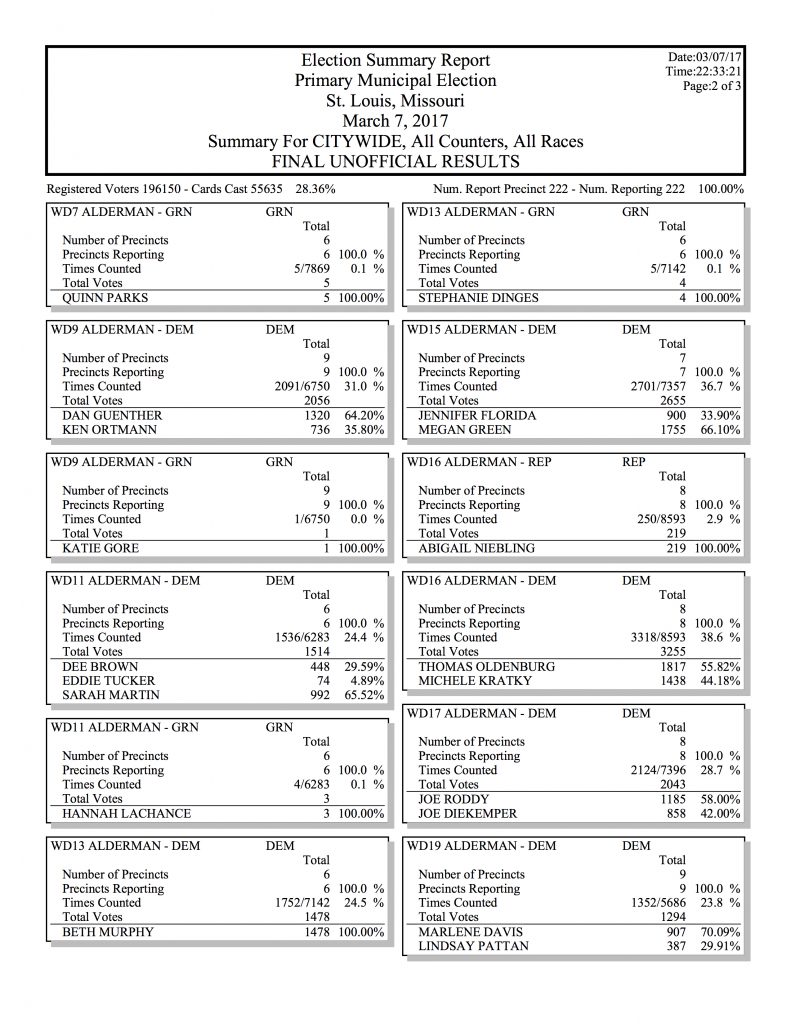 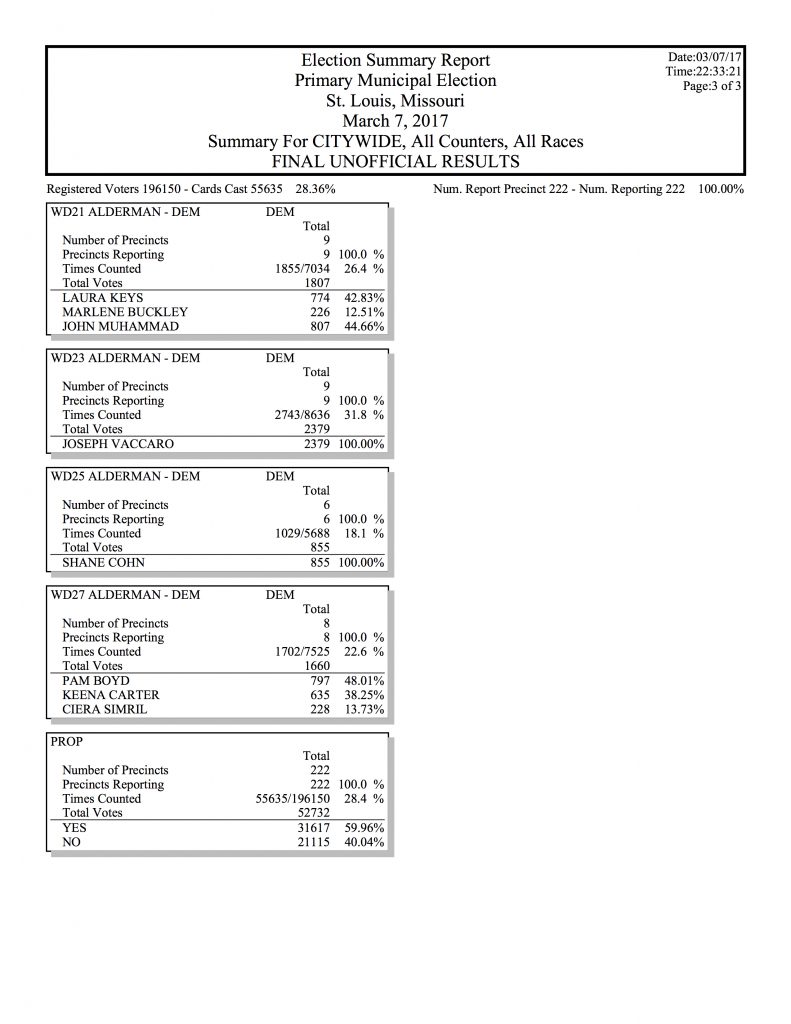