With the deadline today, MLS has officially received twelve applications for two MLS expansion franchises, according to multiple sources. It is widely considered that Sacremento, which has a stadium plan in place, and St. Louis, remain the favorites to be awarded teams #25 and #26. St. Louis Public Radio has the latest on the stadium funding effort in St. Louis. You can read nextSTL coverage of SC STL here. MLS has said it will announce expansion franchises later this year.

ST. LOUIS, January 31, 2017 – An ownership group from Missouri today formally submitted an application for a Major League Soccer expansion team that would play its matches in a new 20,000-seat stadium to be built in Downtown St. Louis, a city that for generations has been considered the traditional home of soccer in the United States.

The St. Louis ownership group, SC STL, filed the application and supporting documents with MLS Commissioner Don Garber and MLS President and Deputy Commissioner Mark Abbott.  The submission of the application was followed by a phone call between the league office and SC STL lead owner and chairman Paul Edgerley.

“It is a privilege to represent St. Louis in the effort to bring Major League Soccer to the city,” Edgerley said.  “Formally filing the application for an MLS expansion team is an important milestone.   We’ve spent a lot of time with MLS officials and feel that St. Louis is very well positioned to be awarded a club.  There is still a long way to go, but thanks to the recent progress made possible through collaboration with city officials, we are very close to bringing Major League Soccer and a multi-purpose stadium to the downtown area.”

Edgerley, a senior advisor at Bain Capital and a Managing Director with VantEdge Partners, is joined on the SC STL’s Executive Committee by three other officers who include Jim Kavanaugh, the Vice Chairman of SC STL and CEO of World Wide Technology.

“The timing is right to bring MLS to St. Louis and St. Louis is ready,” said Kavanaugh, who is also the Founder of Saint Louis FC, which plays in the United Soccer League.  “We have an incredible soccer history, soccer infrastructure and fan following that deserves Major League Soccer.  With the Rams leaving our community, St. Louis deserves an ownership group committed to the growth and development of St. Louis.  To that end, we will do all we can to make sure St.  Louis is announced later this year as a member of the Expansion Class of 2020.”

Terry Matlack, Managing Director of Tortoise Capital in Kansas City and a Partner in VantEdge Partners, is also a Vice Chair of SC STL while Dave Peacock, formerly President of Anheuser-Busch, serves on the Executive Committee of SC STL.

The proposed stadium will generate 450 start-up and construction jobs and 428 permanent jobs from team/stadium operations.  It will be located virtually adjacent to and west of historic St. Louis Union Station in Downtown St. Louis on 21 acres of property that will soon be vacated when new highway interchanges are introduced to accommodate the relocation of the National Geospatial Agency.

The stadium would complete one of the great corridors of sports, culture and entertainment in the nation, with residents and visitors able to visit within one mile the new Gateway Arch grounds, new Kiener Plaza, Busch Stadium and Ballpark Village, CityGarden, Scottrade Center and Peabody Opera House, St. Louis Union Station and new MLS stadium.  The corridor will be completely walkable and accessible via three current Metro Link stations, with more than 1,000 new parking spaces planned for the stadium to complement ample parking options that already exist nearby.

The 12 markets submitting applications for an MLS expansion franchise: 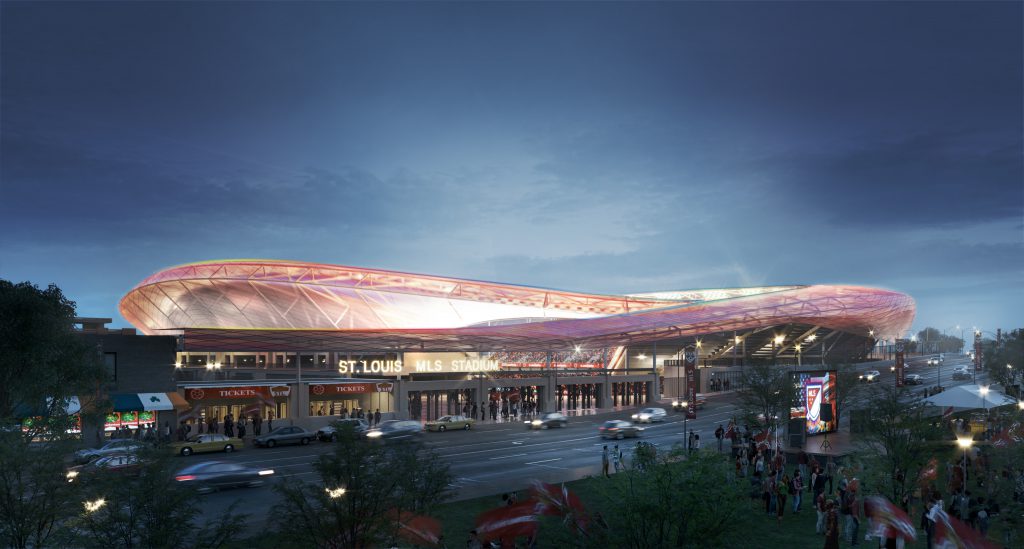