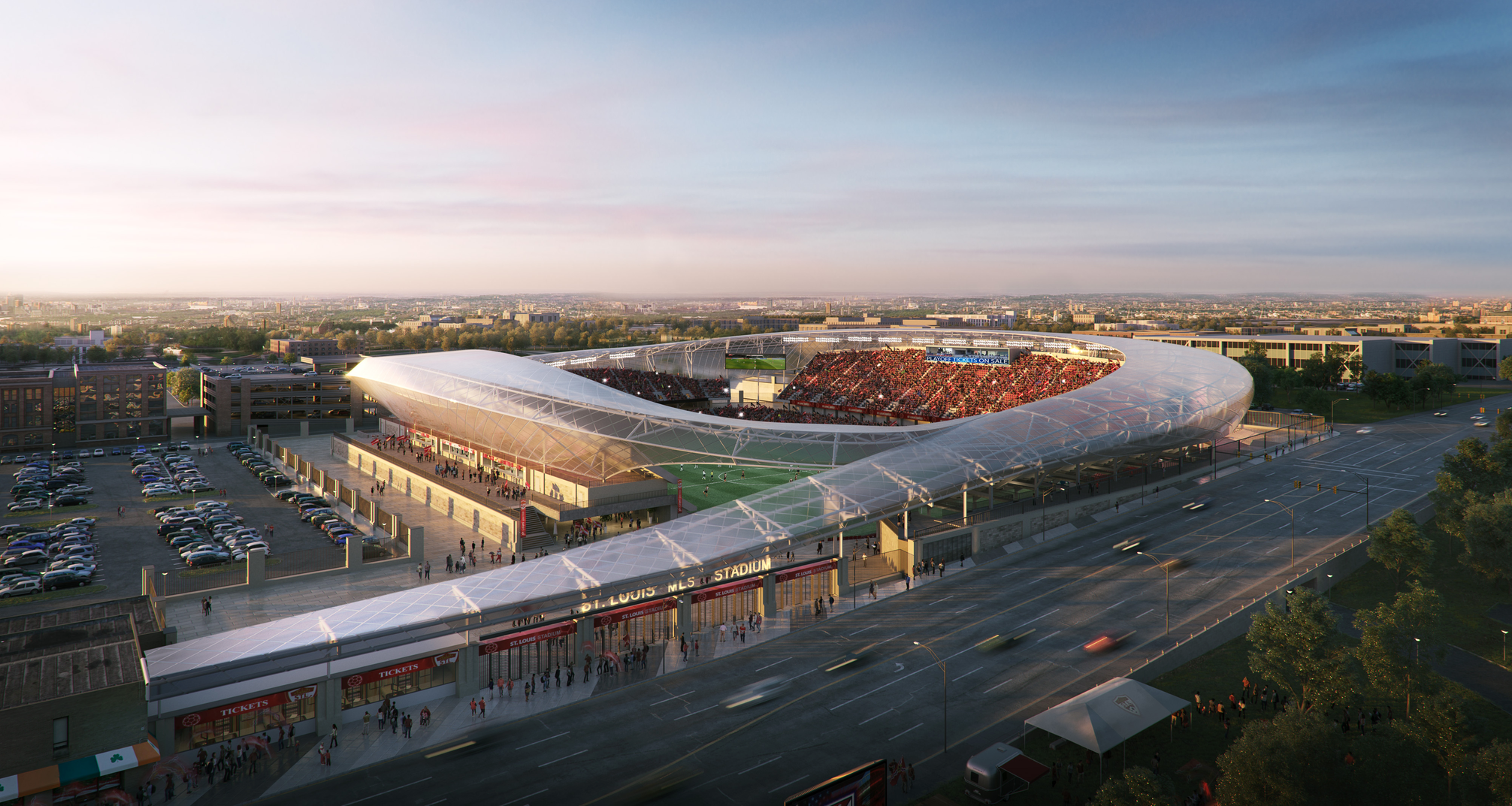 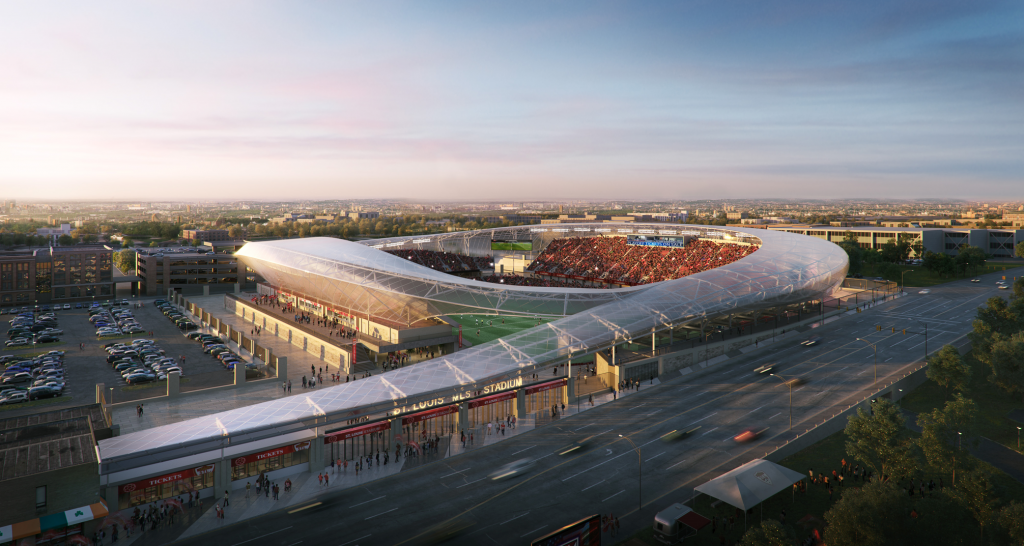 On a call today with media representatives, MLS Commissioner Don Garber stated that the expansion fee for the next two teams to be added in the third quarter of 2017 will be $150M. The deadline to be considered for the next round of expansion is January 31 of next year. Two additional teams will be added at a later date, with no firm timetable for that announcement.

It is unclear how the expansion fee, which is $50M less than penciled in by the hopeful SC STL ownership group, will impact the request for public funds in St. Louis City. Proponents had stated they would seek $80M via a 1/2% sales tax. What is clear is that the city and SC STL are moving quickly to attempt to be one of the two teams added late next year.

To be considered by the league, SC STL will be required to submit detailed information about the ownership group, a detailed stadium plan including the site, and private and public support. In addition, MLS is asking for commitments for stadium naming rights and jersey sponsor.

Regarding St. Louis, Garber stated that if the public vote in St. Louis fails, the question as to whether SC STL remains a viable expansion option is up to the ownership team and not the league. This would seem to put the financing question directly onto SC STL. The statement reveals a big divide in how the effort played out to build an NFL stadium in the city in order to keep the Rams. Although ultimately not a deciding factor, it was made clear that without $100Ms in public support, the team would not stay.

As the recent funding request was revealed in an application for Missouri state tax credits, the funding outline for the project is fluid. SC STL had lined in an expansion fee of $200M, stating that this cost would be paid entirely by private funds. As we wrote, it hardly matters where it’s said each part of the funding originates. That language may set up the argument that the request for public funding remains unchanged, while the expansion fee will still be paid with private funds.

In a practical sense, the $50M reduction will have downward pressure on the request for public funds. Fair or not, the perception is that SC STL just saved $50M. Recent expansion fees included Los Angeles FC $110M, Minnesota United FC $100M, New York City FC $100M, Orlando City $70M. Still, the league sought to raise the bar on the total cost a franchise, citing the cost of multi-million dollar practice facilities and other expenses that are relatively new to the league.

Republic FC in Sacremento, which the commissioner said the league speaks to more than any other prospective ownership group, none-the-less will be required to go through the same process as other prospective markets. Sacremento is widely seen as being the likely first choice for league expansion, with St. Louis, Detroit, San Antonio, Cincinnati, Charlotte, and San Diego not far behind. All but two teams will be waiting beyond 2020.

Miami is currently pegged as the 24th team to join the league. The commissioner stated the league continues to work on a deal in that city, but seemed to leave open the possibility that Miami could be replaced if that process cannot reach a conclusion.

Locally, the push is for an April public vote on public funds to support an MLS franchise. As previously noted, a large part of the public financial commitment could be made without a vote of city residents. The state can grant $40M in tax credits. A TIF commission could add millions more without a public vote. St. Louis County, and the six other counties in the St. Louis metropolitan region have no plans to provide support for the expansion effort.

Additional information from media availability with local news:
On a phone call with local reporters following the MLS conference call, representatives of SC STL repeated their confidence that St. Louis will be awarded a franchise. Jim Kavanaugh, SC STL Vice Chairman, made the case that the requested incentive package from the city and state is similar to those requested by other businesses engaged in economic development. Kavanaugh is one of the original Founders of and is currently CEO of World Wide Technology in St Louis. The total amount is related to the amount of economic activity created and not the financial ability of the potential ownership group.

The SC STL pro forma to own and run a team counts on public and private investment. Representatives confirmed that the announced $150M franchise expansion fee will not change the public ask. They also relayed that the $200M number was a placeholder, representing the maximum rumored cost. Apparently the fee has been a moving target in this process, beginning at the same ~$100M as recent teams, but growing as interest increased to nearly 10 cities. If the fee had come in at $200M, it seems the ownership group may have reevaluated its plans.

Asked if voters going to the polls in April will know a “no” vote ends the effort to bring the MLS to St. Louis, Kavanaugh stated it is “highly unlikely” the effort would continue without an affirmative vote. He was not ready to say it would definitively end the project, stating that, however unlikely, in theory other funding not yet considered or known could emerge. 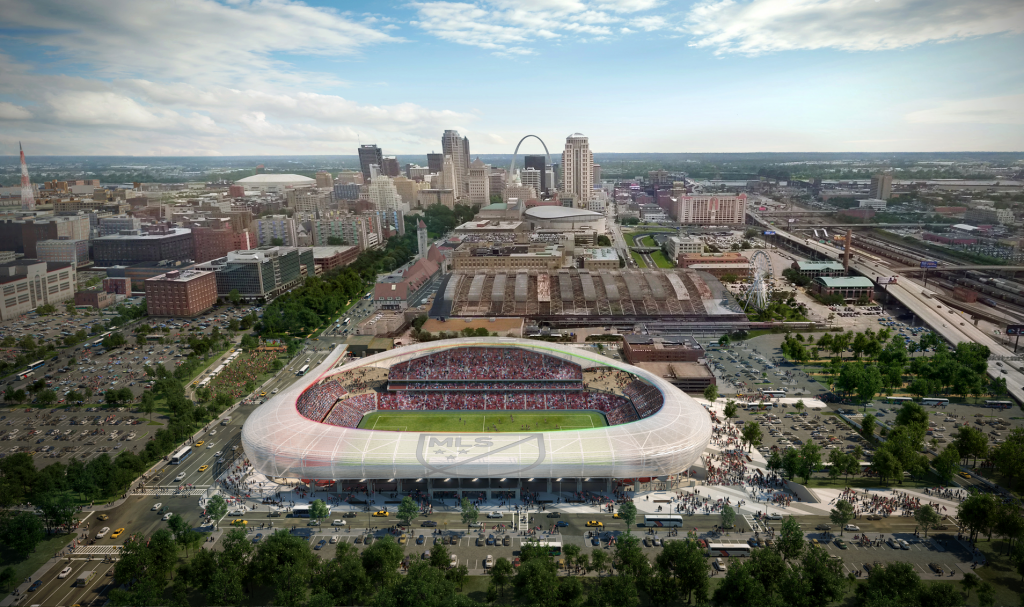 Hoped for subsidies for the hoped for Major League Soccer stadium in downtown St. Louis have reached 60% of the $200M project. Oh, there are ways to spin it of course. It’s really just $120M of a $405M project they say. Why? Because MLS appears ready to require a $200M franchise expansion fee.

Further details of the subsidies are found in the City of St. Louis Land Clearance for Redevelopment Authority’s request for $40M state tax credit application. That document reassures us that the estimated $200M expansion fee “will be paid exclusively from private sources.” So no worries. To be clear, we should worry.

What should be understood is that although the NFL turned up its nose at St. Louis and hundreds of millions of dollars in public money, and the city and state decided they didn’t like the NFL after the breakup, it was only the snub that drew real objections, only wounded egos that offered criticism of that failure. There was no great realization that subsidizing stadiums and professional sports hasn’t and doesn’t work as an economic development tool. So here we are again.

The expansion fee is simply the amount MLS thinks it can get someone to pay in order to join the league. In St. Louis, this “someone” is the public. With the same $10M expansion fee paid by Toronto FC to join MLS in 2007, or even the $70M reportedly paid by Orlando City, St. Louis and Missouri taxpayers would be on the hook for $0. The expansion fee is a fee on taxpayers.

The SC STL ownership group says it will pay the $200M fee, as well as $80M of the $200M stadium project. Still, it only works for this assembled group of millionaires and billionaires if the public puts in $120M on top of that. The MLS and SC STL, and our political leadership in the City of St. Louis, are all betting that the public will pay.

What the public should demand, the option the public should be able to put forth, is a less costly stadium, a smaller expansion fee, and more money from the lauded ownership group. Savvy (and justifiably jaded) St. Louisans can already hear the assurances that everything has already been done on this front, that tough negotiations and contentious give-and-take has led us to this do or die moment, that the best possible deal is on the table. It’s not true.

A $150M stadium and $150M expansion fee would mean the state could provide $20M in tax credits and the city $0. Yes, those are arbitrary numbers, but no less so than those being sold by the city and ownership group. A $150M stadium would be impressive. Other teams have done it . MLS would do well to get a $150M fee to add a St. Louis team. After all, we’re told over and over again just how much MLS wants to be here.

The good news is that the commitment to a public vote for at least a portion of the proposed subsidy provides some opportunity to call the bluff. Details of any spring vote are yet to be finalized. The number could change to $40M or $20M. Perhaps in the end, there isn’t a vote.

The city’s argument for giving money to the ownership group deserve to be heard [Read the full tax credit application here]. What stands out in the argument for public money to bring the MLS to St. Louis?