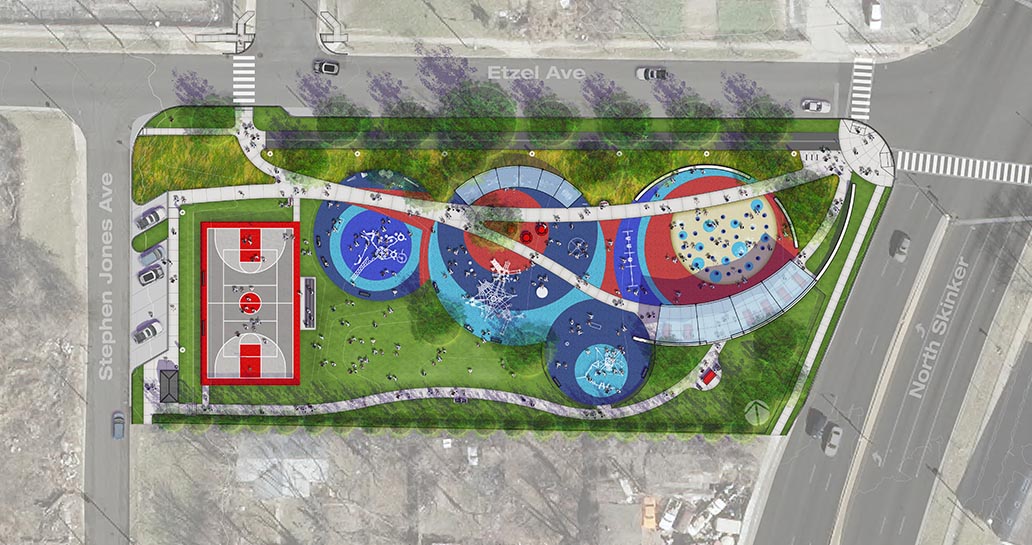 Great Rivers Greenway, the National Recreation and Park Association, Beyond Housing, and the City of Wellston are celebrating the official opening of Trojan Park this weekend. The collaboration has transformed a vacant 1-acre corner lot into a community asset in the suburban municipality of Wellston along the St. Vincent Greenway (master plan).

Designed by Forum Studio of St. Louis, Trojan Park is the result of a community engagement process that focused on desired amenities. The completed park features a modern playground, full-size basketball and volleyball courts, splash pad, a family picnic area, and extensive shade structures. There is also a full repertoire of outdoor adult fitness equipment. Great Rivers Greenway has been sharing images of progress on its Twitter account. Full details of the October 8 event is below. 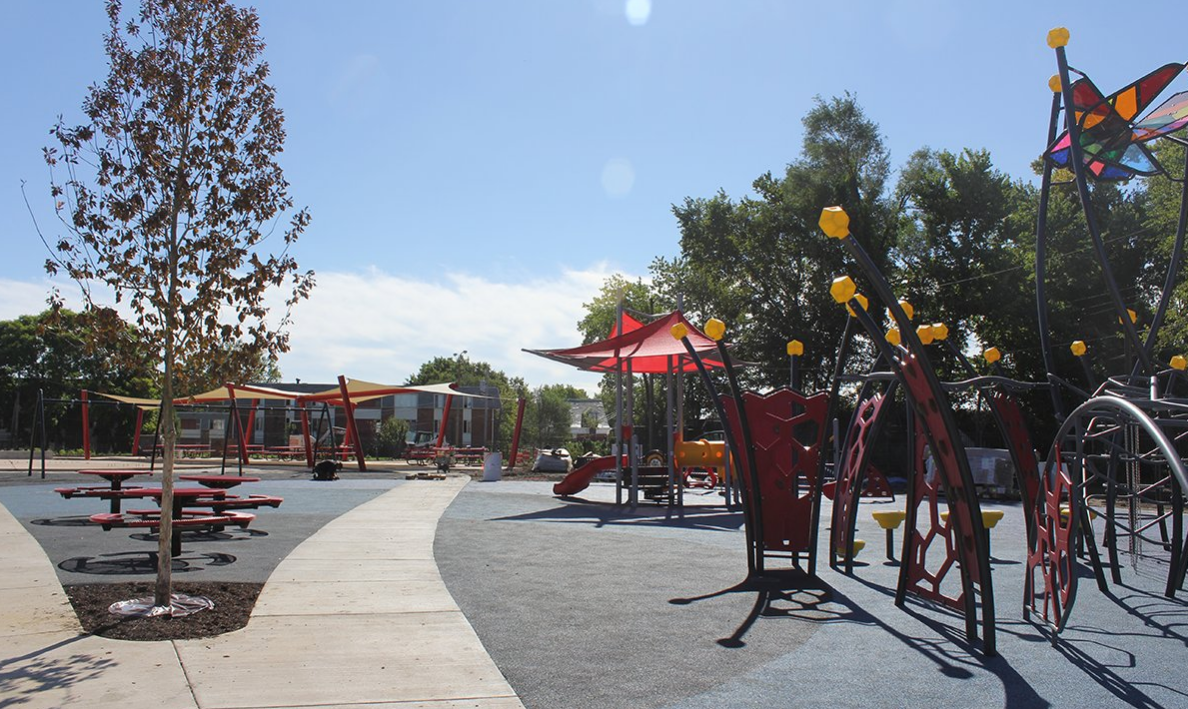 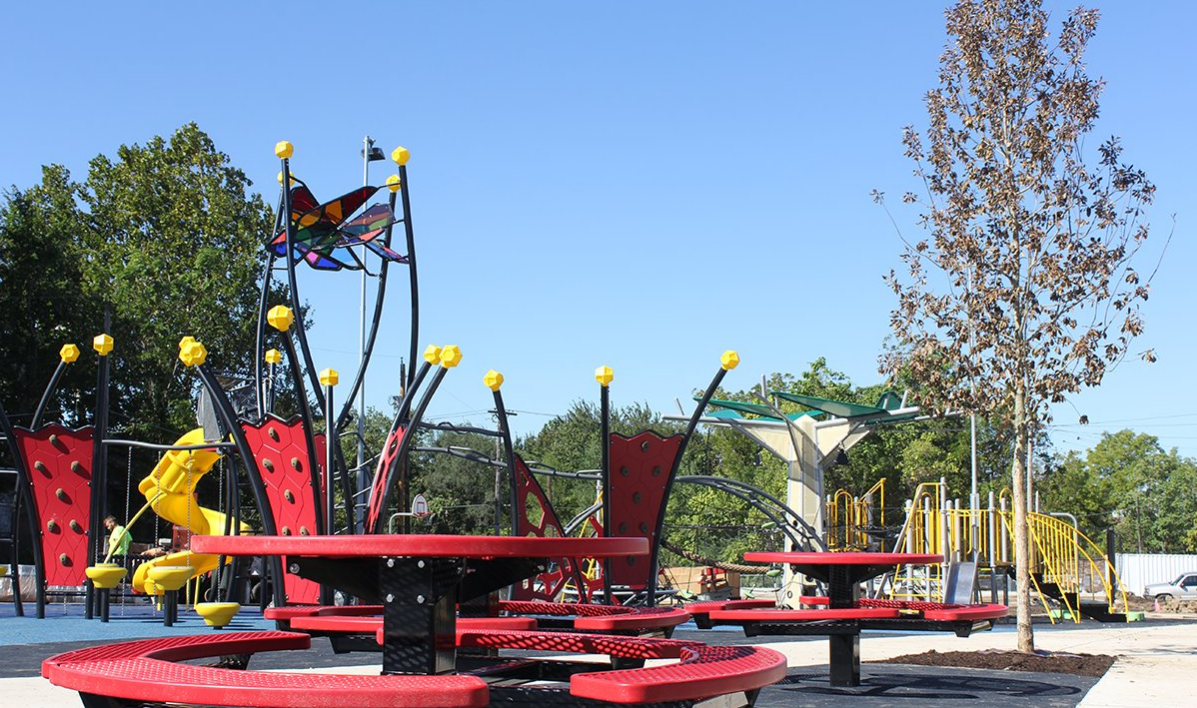 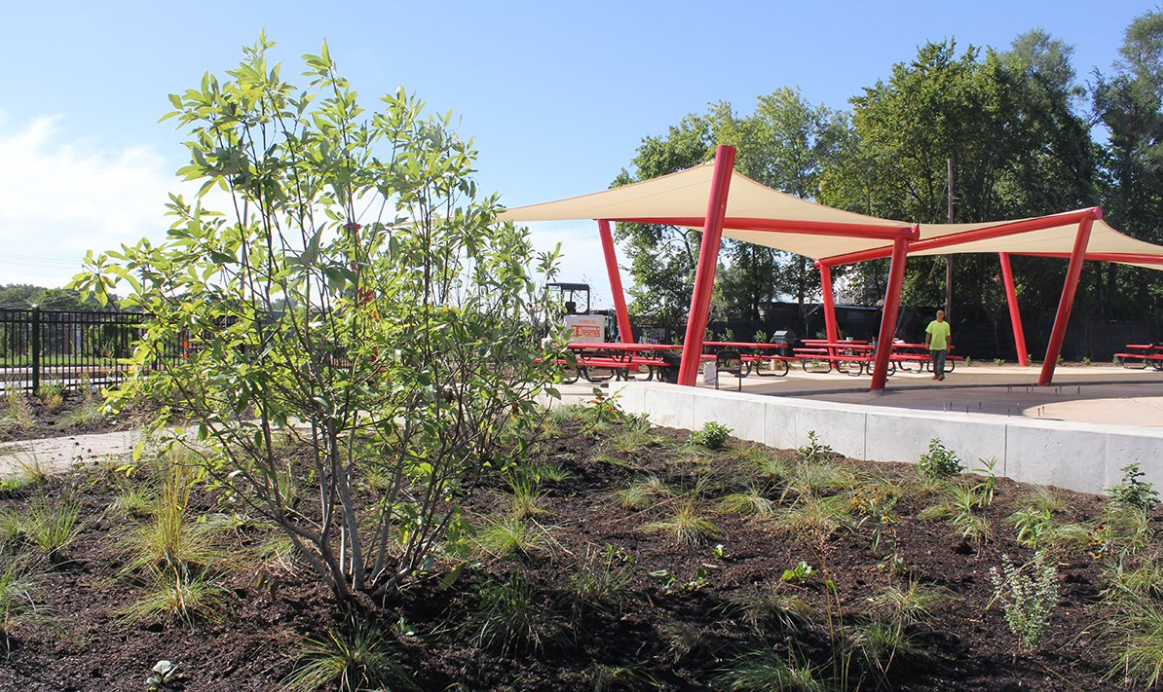 Great Rivers Greenway is partnering with the National Recreation and Park Association, Beyond Housing and the City of Wellston to transform a vacant lot at the corner of Skinker and Etzel into a vibrant community park. Named after the mascot of the former Wellston High School, Trojan Park aims to create a safe place for families to gather and play. 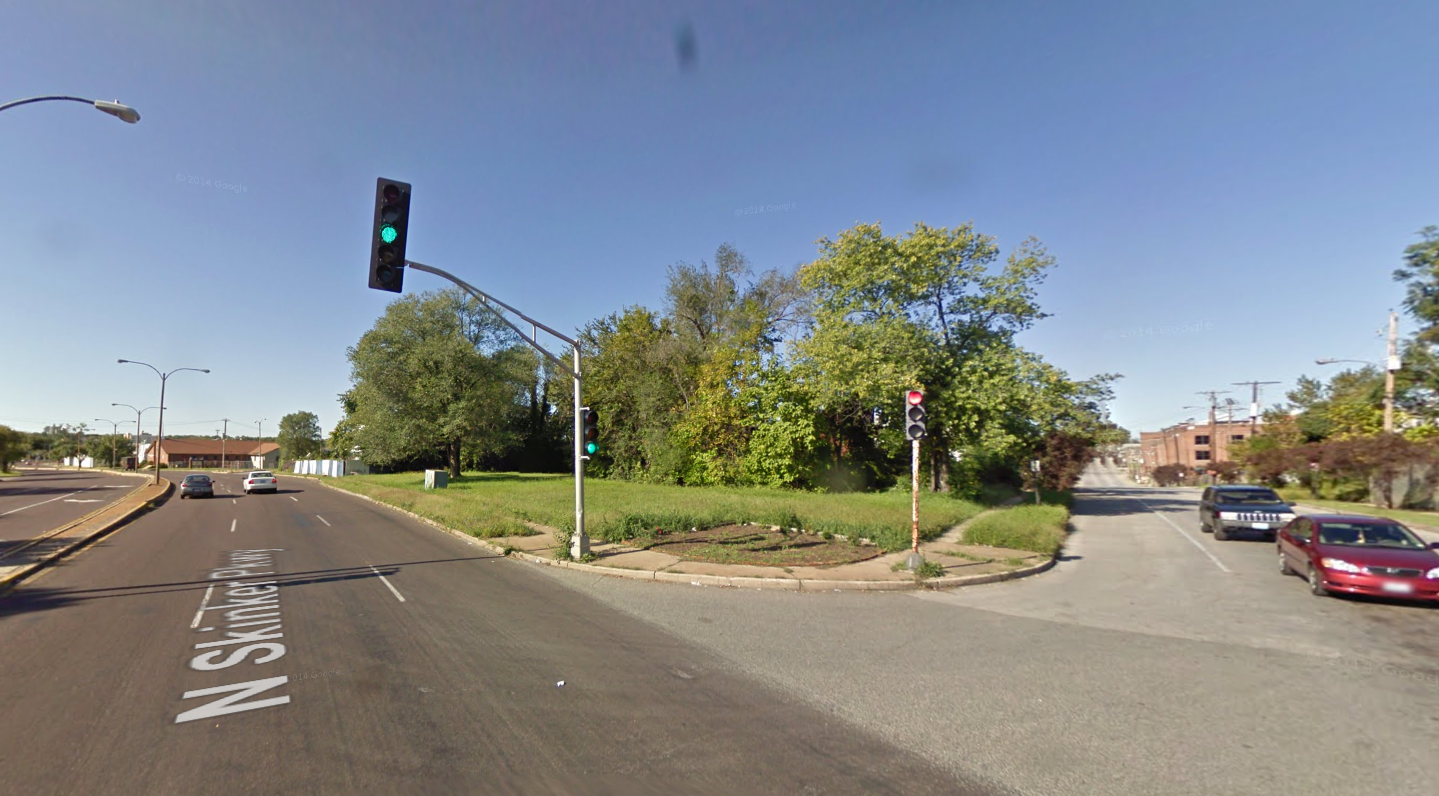 {Skinker at Etzel prior to work beginning} 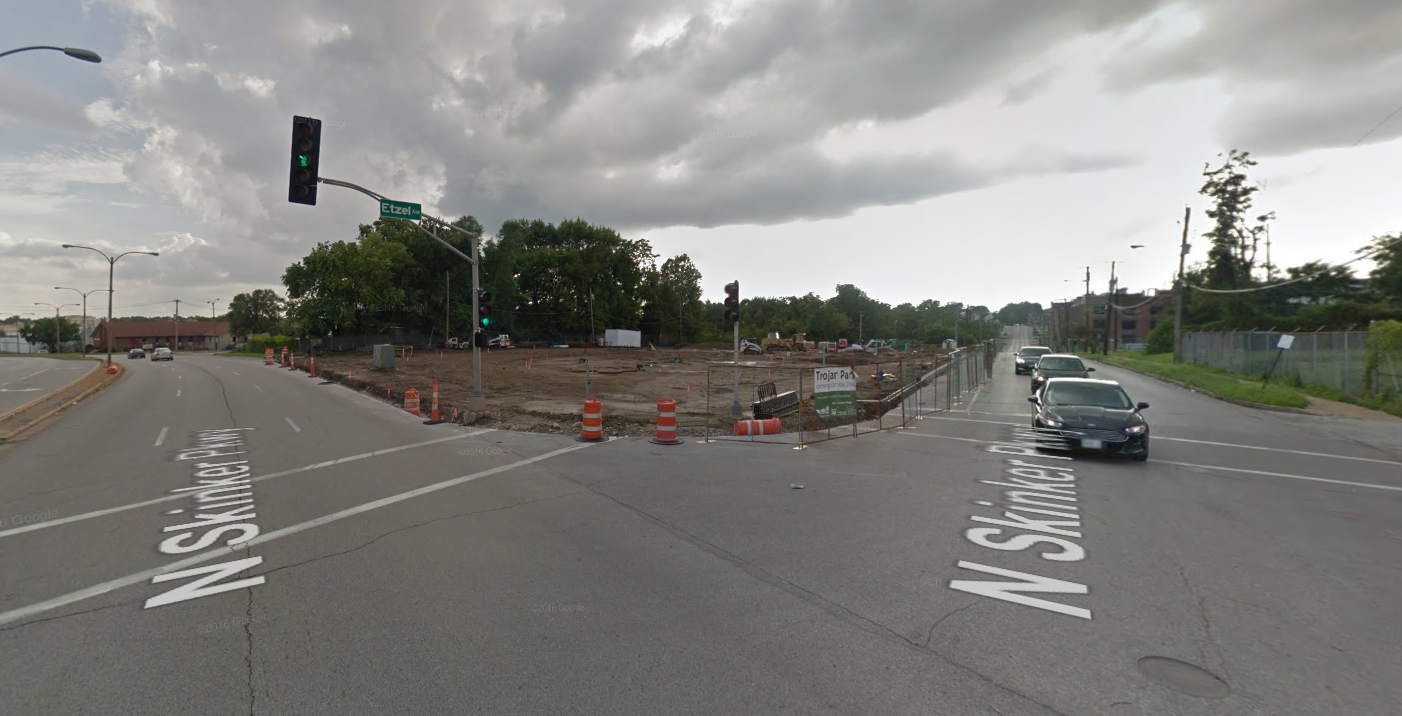 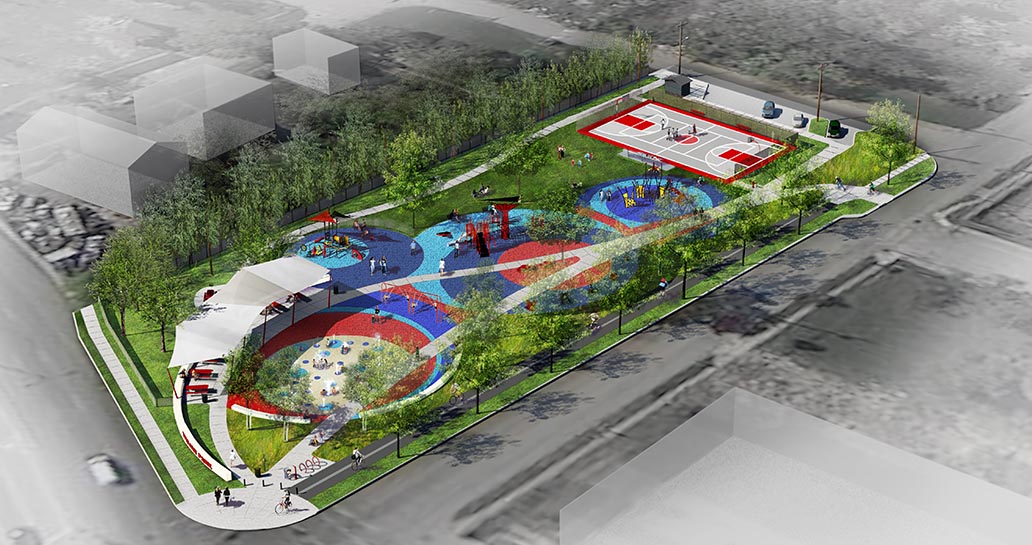 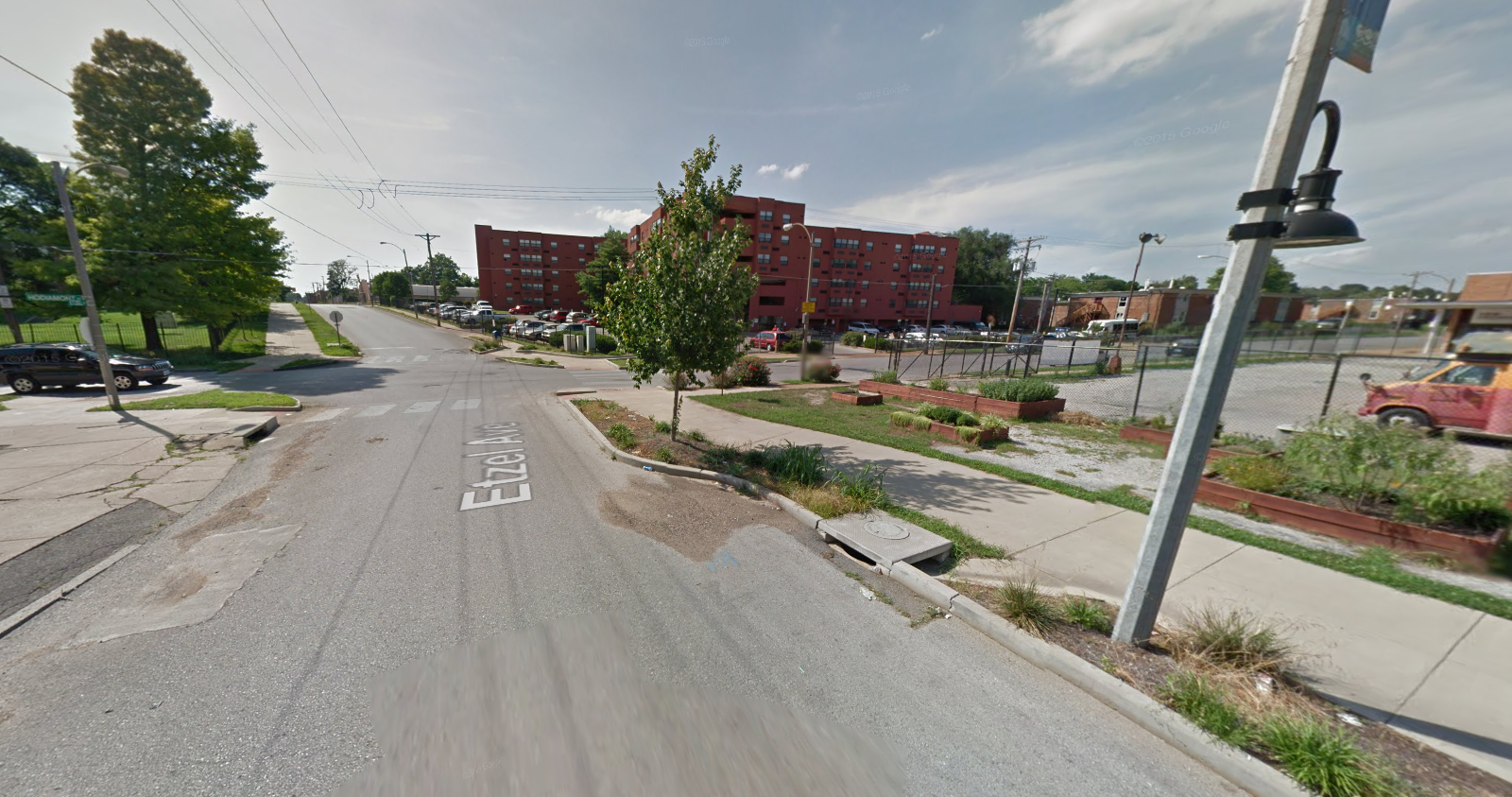 From Forum Studio:
The City of Wellston has chosen the name Trojan Park for the new civic gem, in honor of the former Wellston High School mascot.
Each year the National Recreation and Parks Association (NRPA), as part of their Parks Build Community initiative, conducts a complete park makeover within the city hosting their annual conference. In 2016, thousands of parks and recreation professionals will converge on St. Louis for the industry’s largest event. At this year’s conference, a brand new park will be unveiled in Wellston, a neighboring suburb of St. Louis. This will be the first time that NRPA has constructed a new park from scratch.

As part of the process of designing the final section of the St. Vincent Greenway, Forum Studio along with Great Rivers Greenway and Beyond Housing, prepared a concept park design for the 1-acre parcel at the southwest corner of Etzel and Skinker in the city of Wellston. Throughout the year-long community engagement process for the St. Vincent Greenway, area residents relayed their desire for open space and program opportunities that bring the entire community together, improve overall health and fitness, and provide safe places for the children of Wellston to play. The new park offers excellent opportunities to address all of these aspirations and more.

Once Trojan Park is completed, visitors can expect to find many of the features discussed during the community engagement process. The main community gathering space in the park is the splash plaza and shade pavilion near the main entrance of the park at the corner of Etzel and Skinker. The splash plaza will be home to a pop-jet fountain that will serve as a much needed cooling-off spot during the warm summer months.