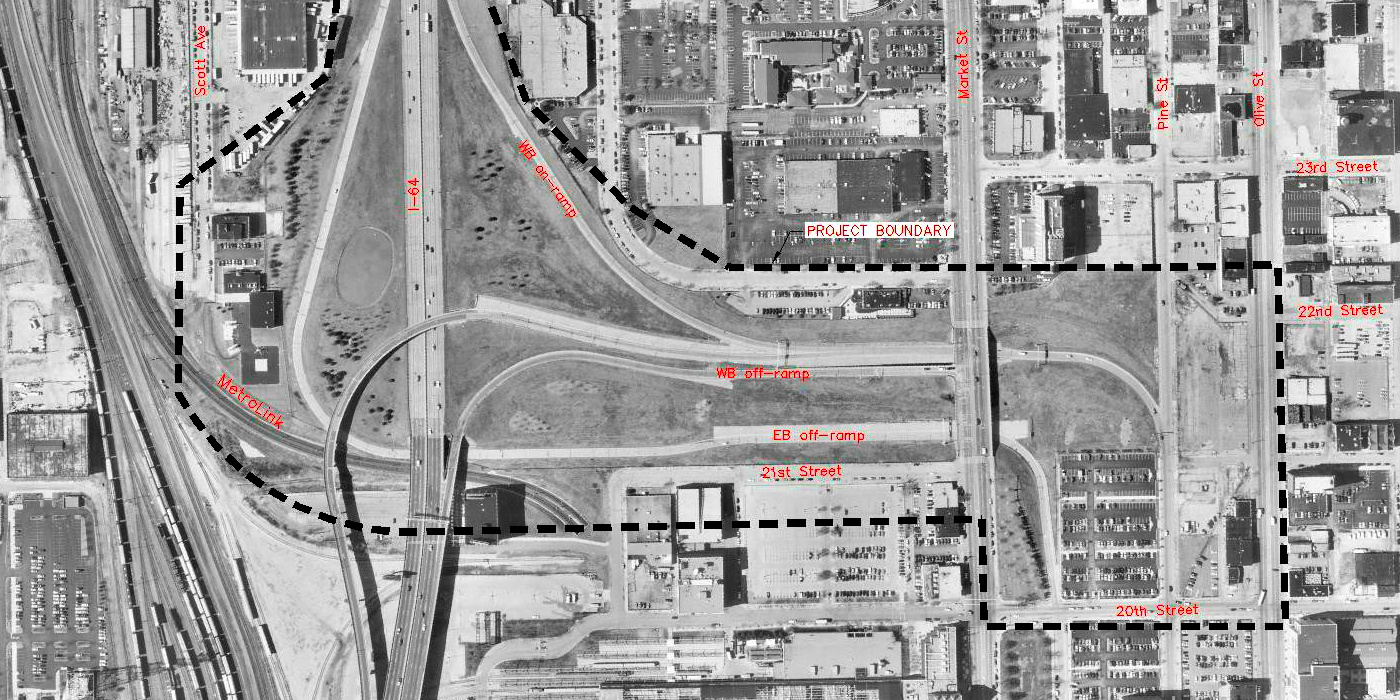 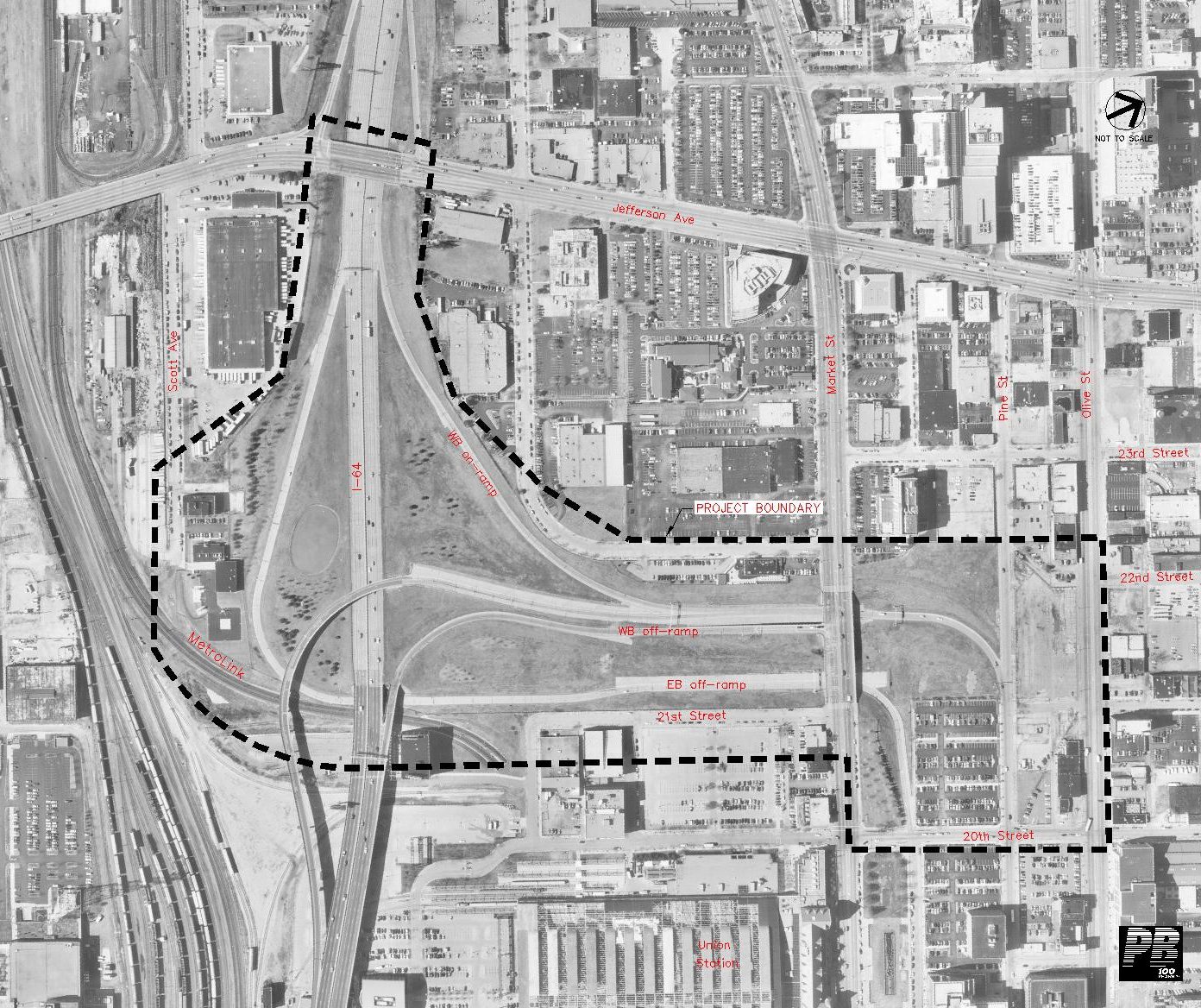 While speculation continues regarding where, and exactly when St. Louis will become a Major League Soccer city, the Missouri Highways and Transportation Commission has approved a two-option to the City of St. Louis on approximately 30 acres of land currently occupied by the 22nd Street/I-64 interchange for “a potential soccer park”. The sale price will be at market rate as determined by a future appraisal. The image above encompasses a potential project boundary and not exclusively MoDOT-owned land.

The option is to the Land Clearance Redevelopment Authority Holdings Corporation for the City of St. Louis (LCRAHC) and would require that the city “must build a full interchange at 22nd Street on I-64”. Plans to foster greater access to the coming $1.7B National Geospatial-Intelligence Agency, just north of the Pruitt-Igoe site, have included a full interchange at Jefferson Avenue. This would appear to fulfill the MoDOT requirement.

The spaghetti plate of ramps bypassing Marking Street and connected north to Pine and Chestnut Streets, is the legacy of the never completed I-755. That project was once conceived to connect I-55 in South St. Louis to I-70 in North St. Louis. We chronicled the life and death of the highway here: The Life and Death of the American Urban Interstate As Told By St. Louis’ I-755.

For decades it’s been known that I-755 wouldn’t be built, but as the city lost hundreds of thousands of residents there wasn’t development pressure to reimagine the area. That finally changed with Paul McKee’s NorthSide vision. The 22nd Street interchange was to be the key south gateway into the 1,500-acre redevelopment project. Various transit oriented design studies and some of NorthSide’s own work have envisioned development of the site. Those plans would have presented multiple parcels for private development. 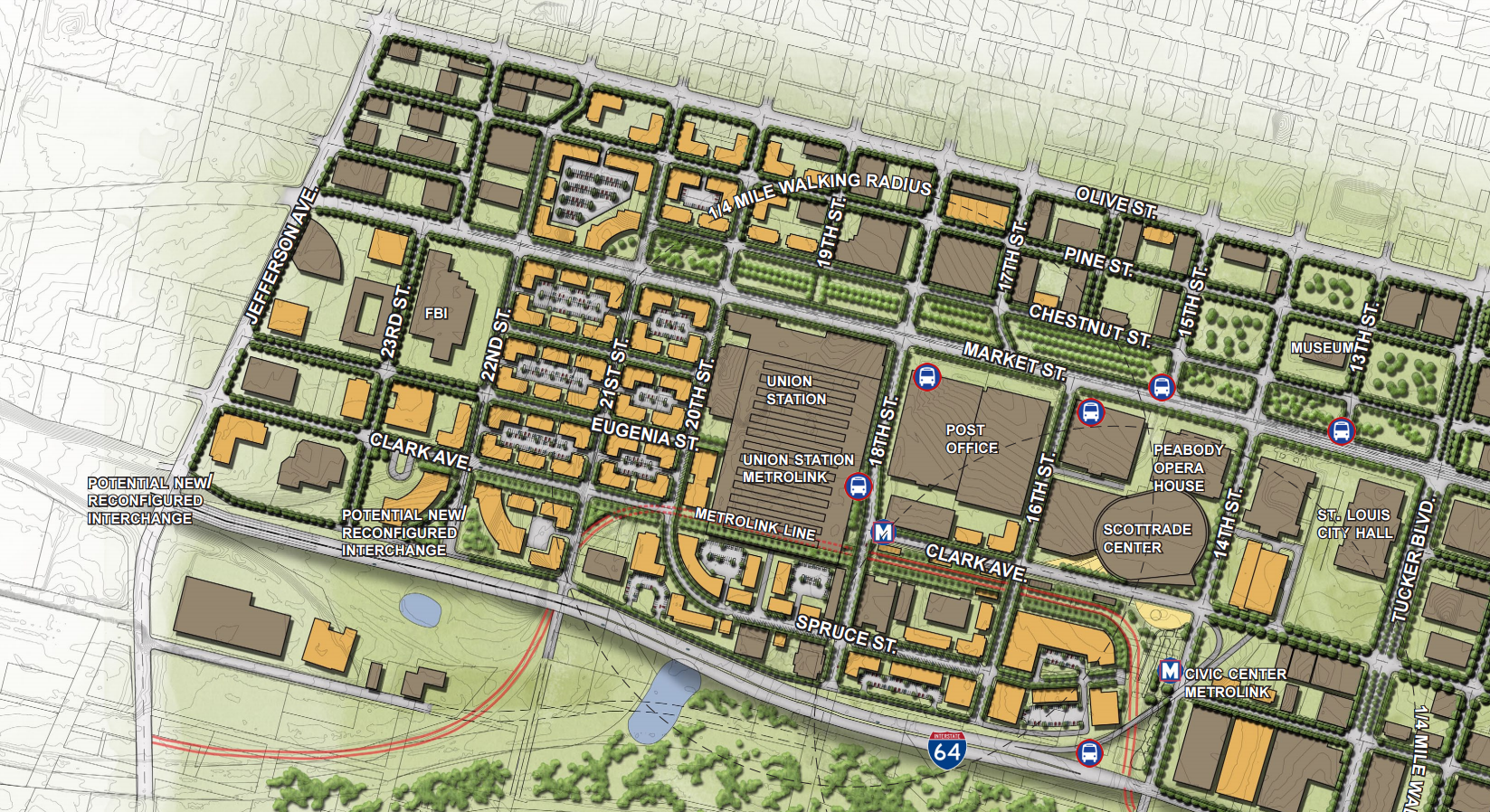 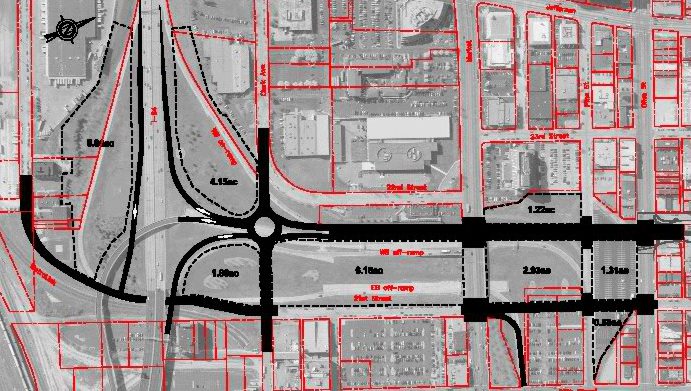 With confirmation that a hotel, apparently a Fairfield Inn, will replace the closed Harry’s Restaurant and Bar (2144 Market St.), the parameters of a possible Major League Soccer stadium are becoming more clear. A stadium could fit between the new hotel and Union Station, though it’s difficult to imagine how the buildings fronting Market Street, the Drury Inn, and Upper Limits climbing gym could all remain.

The location of a soccer stadium in the city has been the focus of increasing speculation in recent weeks as a site in South St. Louis along Gustine Avenue, and a vacant expanse along Grand Boulevard at Chouteau Avenue, have been floated. The Grand/Chouteau site is being promoted by Foundry St. Louis, a prospective ownership group, which has been very public and vocal about its desire to bring a team to St. Louis. Last week, the group unveiled renderings by Cannon Design of a stadium, taking its case to soccer fans.

The MLS2STL group, a collection of civic and business leaders has tasked itself with identifying a viable ownership group for a St. Louis franchise. While not publicly discussing its process or progress, information continues to leak that the group has identified an owner with deep pockets and is focused on a stadium at Union Station. The MLS2STL group is apparently not in discussions with Foundry St. Louis. 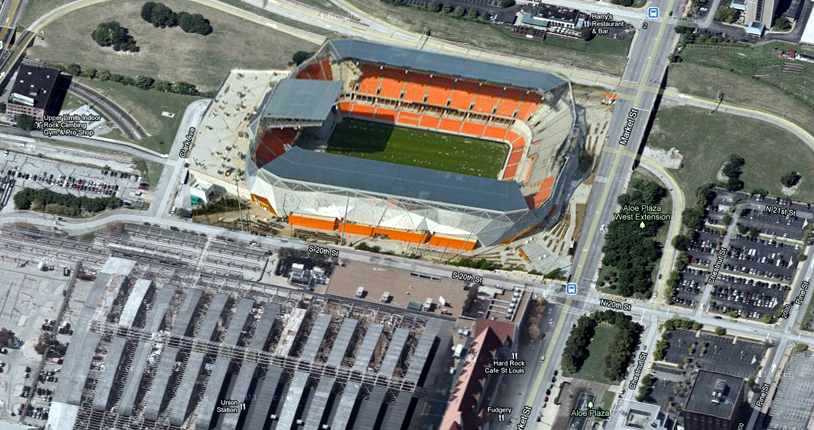 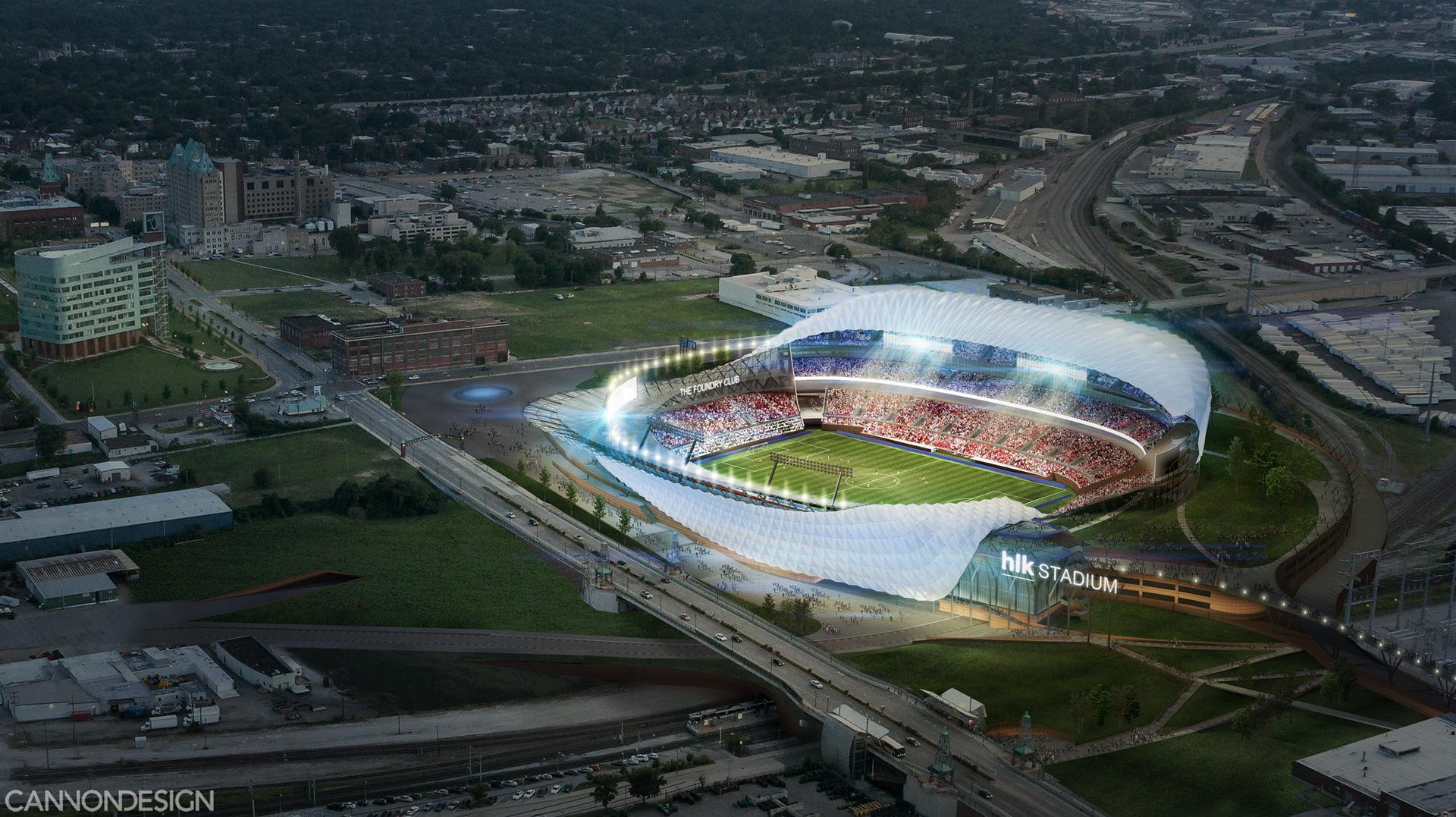 The MoDOT agreement with the city is a significant step toward what is expected to be an announcement in the coming weeks by MLS2STL that an ownership group and stadium site have been identified. It’s expected that MLS will endorse MLS2STL’s proposal. There would remain several important steps before any plan would be finalized. Issues to be resolved include stadium subsidies and street and infrastructure planning.

Any subsidy request for an MLS stadium is certain to be less than what was offered to build a north riverfront NFL stadium. However, the cost to rebuild infrastructure will be in the $10Ms, the St. Louis Blues are seeking $150M+ for renovations to the Scottrade Center (soon to be the TD Ameritrade Center), and a $300M+ convention center plan is in the offing as well. 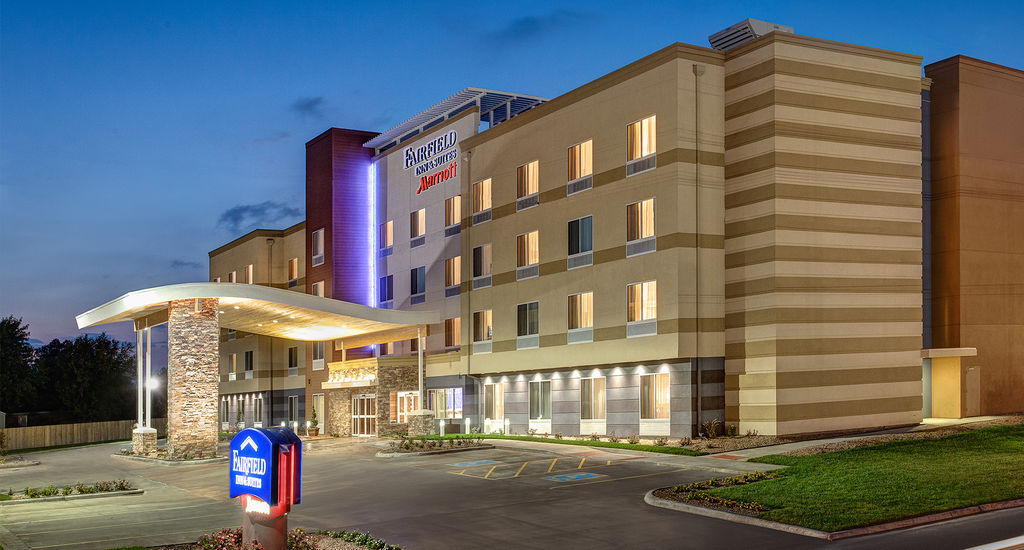 Notes from the Missouri Highways and Transportation Commission:

CONSIDERATION OF EXCESS PROPERTY DISPOSAL, I-64 AND 22ND STREET IN ST. LOUIS CITY
In keeping with the Commission’s policy regarding disposition of Commission-owned property or property rights, the sale of all properties owned by the Commission with appraised or sale values of $200,000 or more must be approved by specific Commission action. MOn behalf of the Director, Greg Horn, St. Louis District Engineer, recommended the Commission authorize the Director, Chief Engineer, Chief Financial Officer, or Assistant Chief Engineer to execute the Missouri Highways and Transportation Commission Option Agreement with the Land Clearance Redevelopment Authority Holdings Corporation for the City of St. Louis (LCRAHC).The Option Agreement will authorize the LCRAHC to purchase the real property within a twenty-four

The Option Agreement will authorize the LCRAHC to purchase the real property within a twenty-four month period for fair market value. The LCRAHC has requested a commitment from the Commission the land will be available for purchase to accomplish a development project in the City of St. Louis. The property is located in the northeast quadrant of Interstate 64 and 22nd Street in the City of St. Louis. The property is approximately 30 acres and the exact acreage will be determined by a survey. The purchase price will be the fair market value of the property as determined by a certified appraiser selected by the Commission. The conveyance will be by quitclaim deed releasing any and all interest the Commission has in the property.Via approval of the consent agenda, the Commission unanimously authorized the Director, Chief

Via approval of the consent agenda, the Commission unanimously authorized the Director, Chief Engineer, Chief Financial Officer, or Assistant Chief Engineer to execute the Missouri Highways and Transportation Commission Option Agreement with the Land Clearance Redevelopment Authority Holdings Corporation for the City of St. Louis (LCRAHC).