The St. Louis Blues are a great hockey franchise. They win. OK, they haven’t won that, but they’re successful year-after-year. In St. Louis we love the Blues. We support the Blues.

The Blues ownership group very clearly takes great pride in being in St. Louis. They’re not going anywhere. Tom Stillman isn’t Stan Kroenke. And everything we hear is that the Blues are a great community partner, often reaching out to support individuals and promote St. Louis, and often without any expectation of positive press.

All that said, let’s have a conversation about the Blues, Scottrade Center, $160M, and the impact on St. Louis. In return for supporting a ~$160M renovation of the Blue’s home arena, the team should relocate its practice facility and planned hockey center to the city.

First, a timeline of recent events. Toward the end of the effort to retain the NFL St. Louis Rams, the future of Scottrade Center was addressed. The guess was that a renovation in excess of $100M would be sought soon. Since then, the Blues have made headlines on and off the ice:

The state was riled up about Governor Nixon’s support of a possible new NFL stadium with state money, perhaps after a cooling off period there’s funding there for the Blues. The Maryland Heights project “public-private partnership” appears to have caught the public off-guard, with numerous officials declining to comment. The May 25 LCRA resolution lays the groundwork for financing Scottrade renovations.

I’m skeptical of the economic value to cities of professional sports franchises. It’s a rather mainstream skepticism. Still, I think it could make sense for the city to support Scottrade renovations (the arena hosts more than just the Blues, of course). We should support the Blues. We should also get something in return.

It may be easy for someone who visits downtown St. Louis only, or primarily, for sporting events, to see the city’s heart as one-dimensional. “If it weren’t for Blues games, I’d never go downtown!” Well the truth is, if someone only comes downtown for a game, that’s not much of a benefit to downtown. Despite what seems like a busy setting, the crush of 20-30-40 thousand fans rushing in and out in a few hours isn’t great for businesses or economic development.

Anyway, the city should get something in return for supporting Scottrade renovations, and with news that Green Street is exploring options to redevelop the Armory building, here’s the idea: 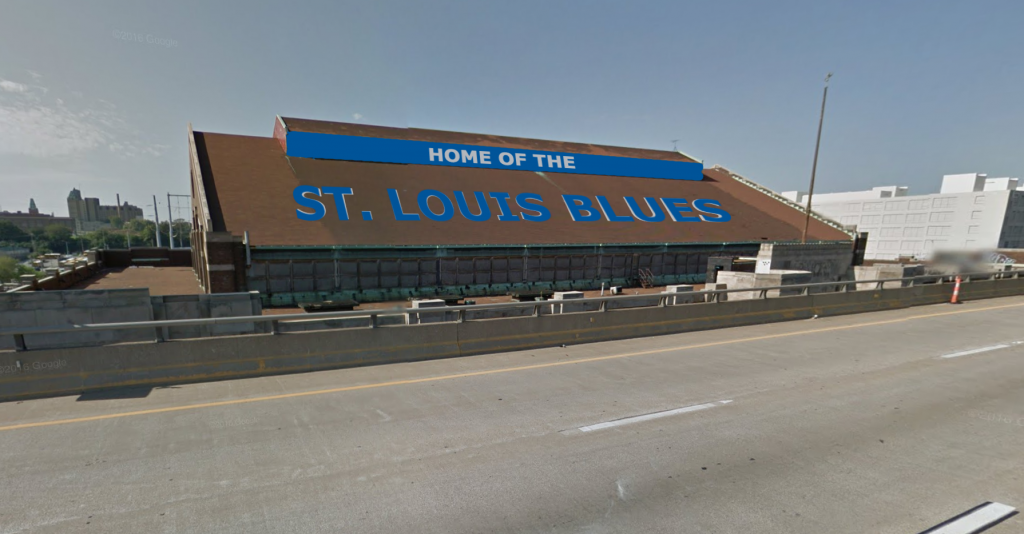 The St. Louis Blues at The Armory
The imposing and prominent Armory building abutting I-64/40 near Grand Boulevard and just two miles west of Scottrade, was completed in 1937. As the name would imply, it served as the home of the 138th Infantry, calling the building home until at least the late 1950s. The Armory built, like well, a tank. In fact, tanks were stored in the underground parking area (perfect for today’s hockey players and team executives). The building remained in use, hosting The Grateful Dead in 1968, and providing a young Arthur Ashe a place to play tennis (read more on the history of the Armory here). 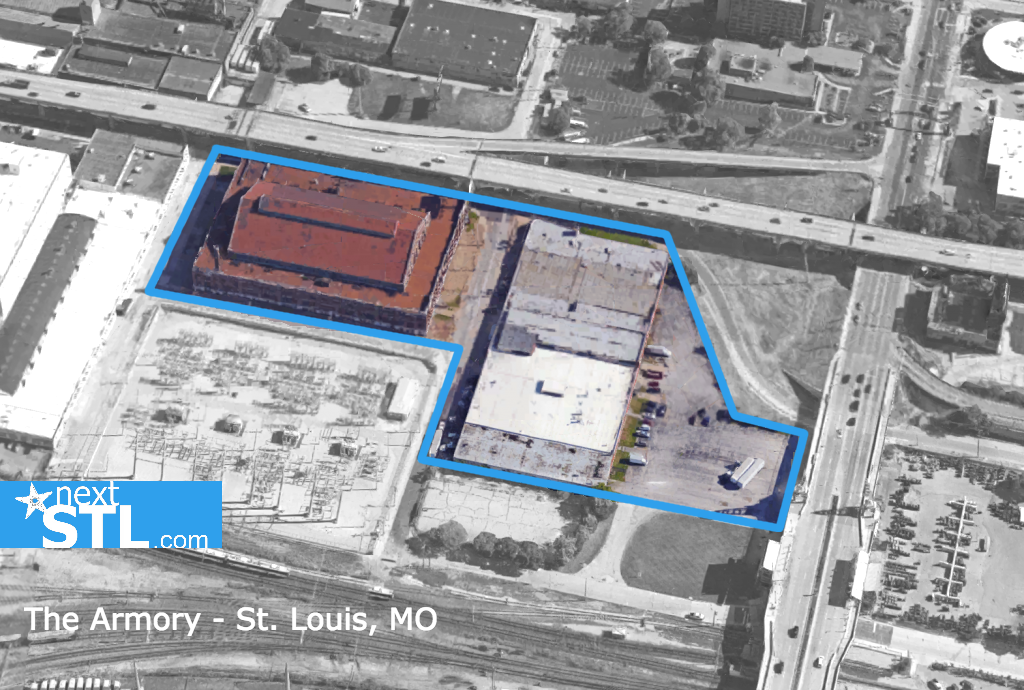 But does the facility work? In short, yes. It’s feasible. In fact, images of the interior reveal a main area that appears perfect for an ice rink. There’s seating, a press box and suite area, and more. The building already has the aforementioned underground parking, and there’s space for locker rooms, training facilities, and more. And the larger building to the east is now owned by Green Street. It could also house rinks, or replaced with a new multi-purpose facility.

One goal stated by the St. Louis Blues of its Maryland Heights plan is to spread to the sport of hockey, to engage youth in the sport. While Maryland Heights may be nearer the white middle class and existing hockey fans, a facility in the city, and adjacent to a MetroLink station and busy bus route, would do more to grow the game. An ice rink facility here would be accessible to more people, of more economic and racial diversity.

Restore a landmark building, gain a high-profile location, connect with a more diverse fan base, honor the military history, and the practice courts of Arthur Ashe, there’s a lot to recommend the Armory. It’s near the Lawrence Group’s Cortex East proposed development, not far from the planned $500M Saint Louis University hospital project, and just south of that school’s main campus. 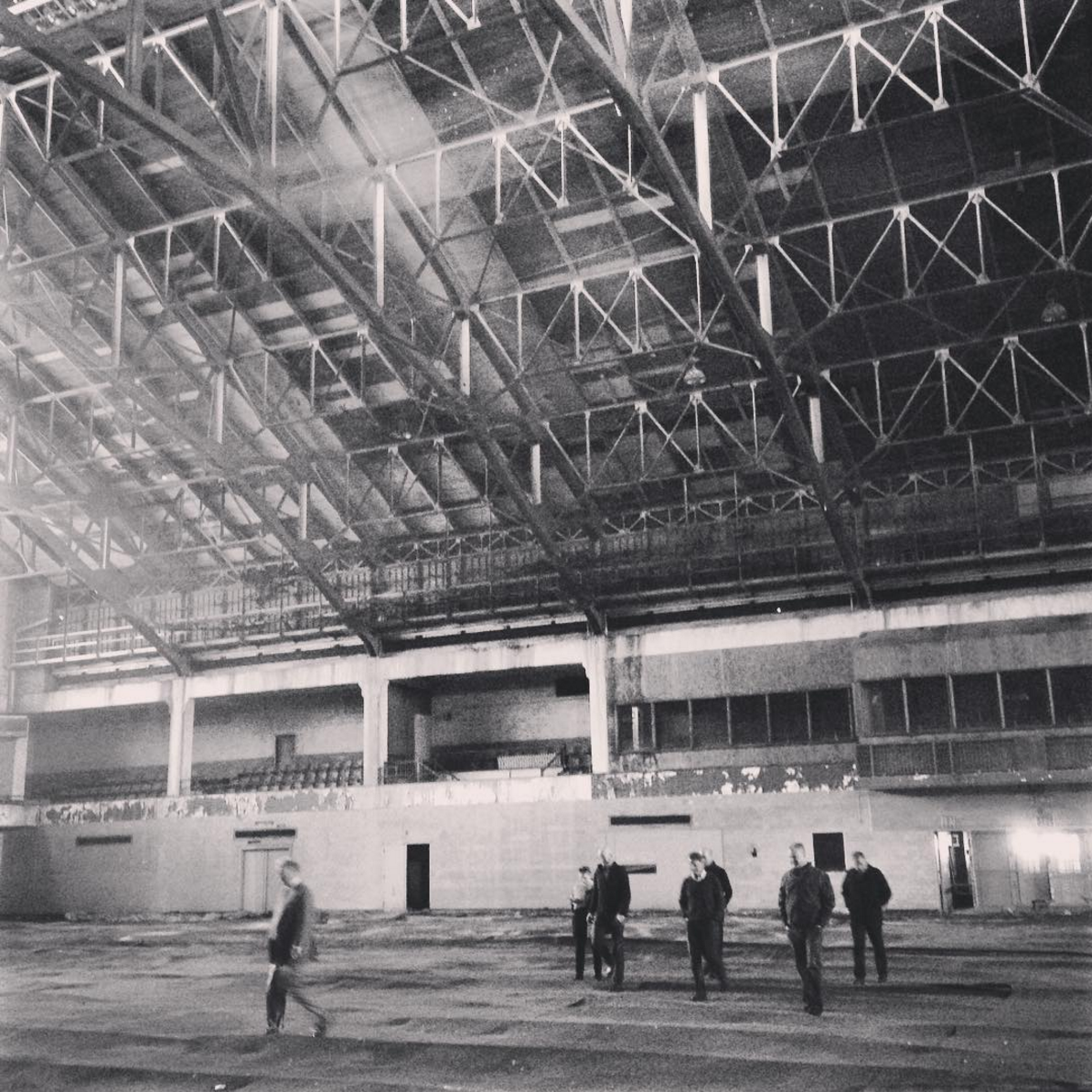 The Armory would provide a much better experience for traveling teams and tournament attendees. The city offers assets that can be sparse in Maryland Heights and other suburban locations, including hotels and restaurants, and family attractions such as Union Station, City Museum, the Arch, Ikea, and everything in Forest Park.

The city serves as host to an unprofitable professional hockey team. There are some positive intangibles that go with that, though they would not be much diminished for the region if the Blues played games at its current practice facility location at an outlet mall. More than one pro team plays outside its namesake city, and no one really cares.

The impact of a facility used almost daily, for tournaments, for practice, for public skating, would be greater than that of the Blues at Scottrade itself. The city would see a greater benefit from being home to the practice facility and ice rinks, than the NHL’s 41 home games.

For the Blues, either location would present a high-profile statement of its belief in the community. For the city, either option would help justify its financial support of Scottrade renovations. The city would be wise to ask for something in return for its investment, its representatives and residents would be wise to push the city to do so.