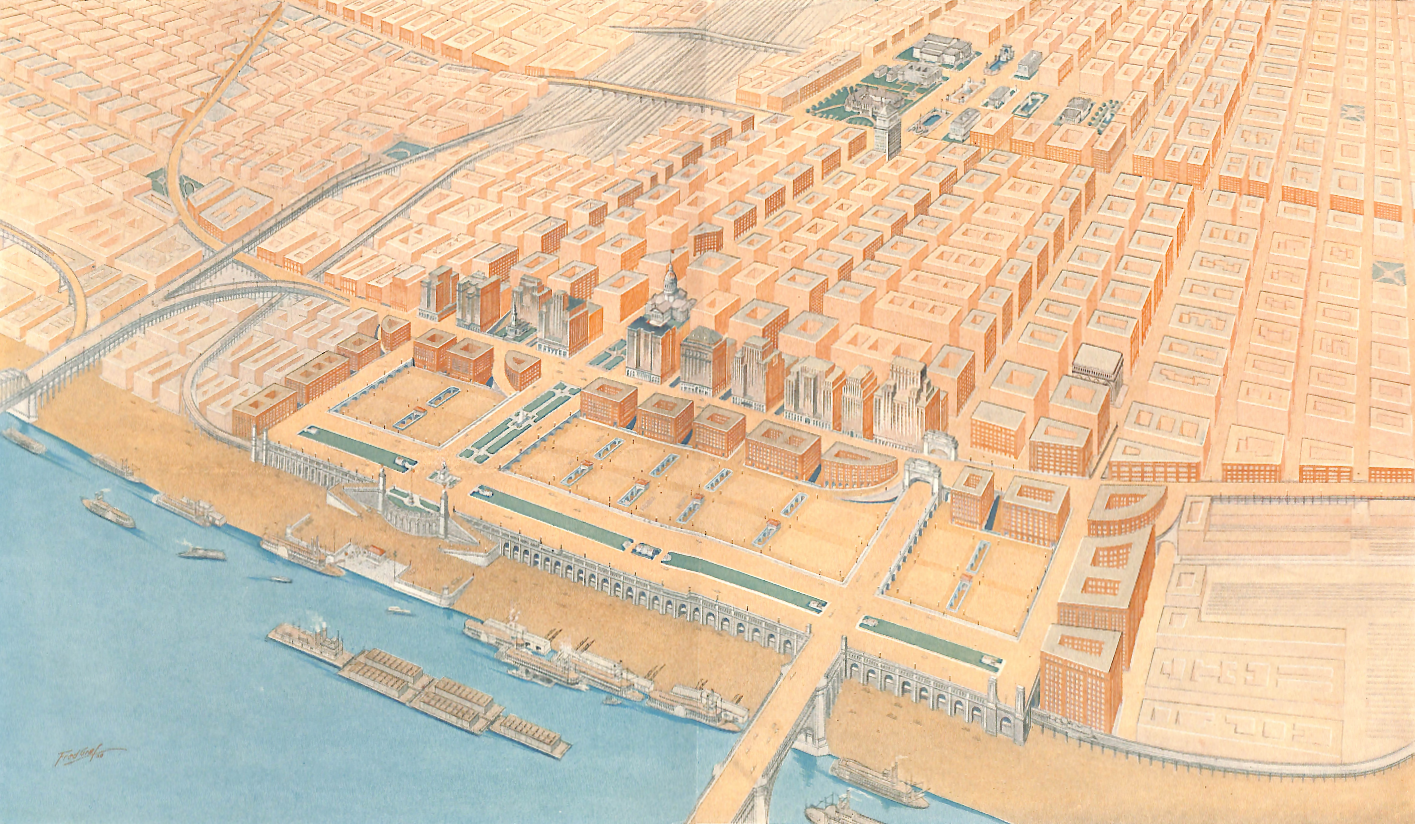 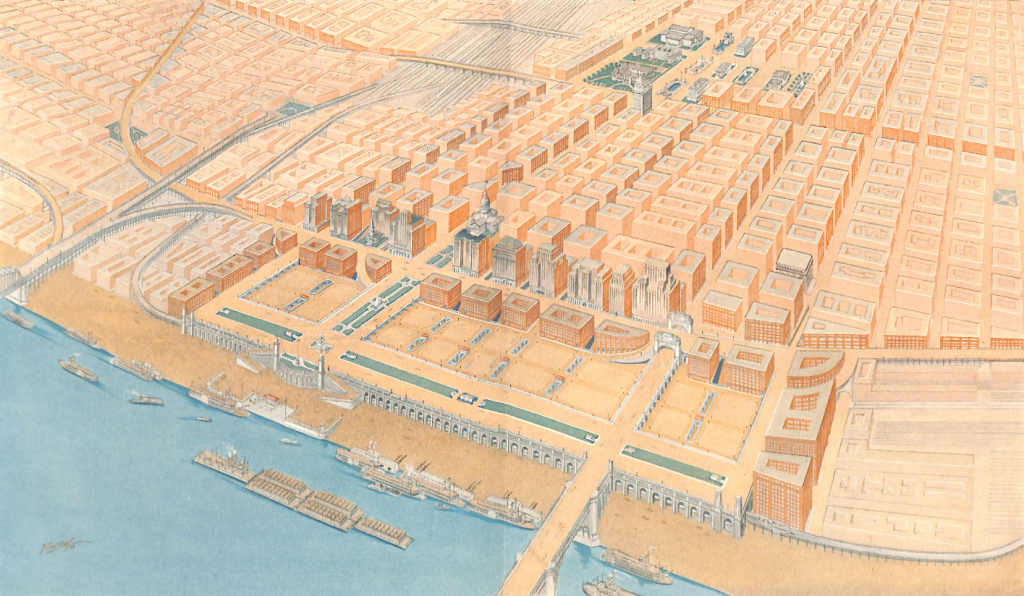 We know that plans to remake the St. Louis riverfront long precede the concept of a national monument and the 1947 design competition won by Eero Saarinen and his Arch. That idea was big, but Harland Bartholomew, the first St. Louis City planner, had much grander ambitions to remake downtown St. Louis.

The St. Louis riverfront would be cleared in the late 1930s, with the Arch being completed in 1965. Bartholomew’s 1928 Plan for the Central Riverfront envisioned land clearance for largely automobile parking – though perhaps with more panache than parking structures of today. This document was sourced via Open Archive STL, an expanding online database of archival public policy documents. 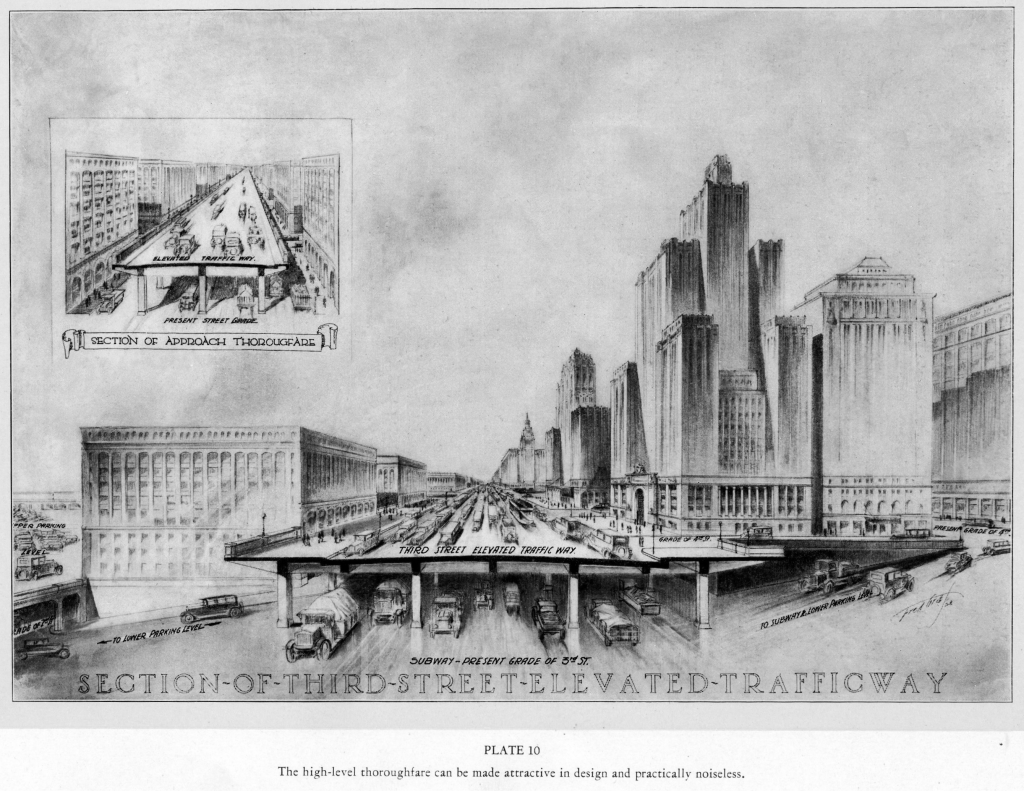 Introduction
The river front was the site of the early City. So long as the City remained small in size the property extending back from the river front for two or three blocks remained in good condition and was actively used: a condition which lasted for almost a century. As ever increasing growth took place it followed the river to the north and south while the site of the early City became the principal business center. The profound influence of the river upon the early growth and development of St. Louis can be noted by the fact that the City scattered itself for twenty miles north and south along its banks. The river was the principal channel of transportation and traffic upon which much of the life of the City depended.

During the last quarter of the nineteenth century many significant changes took place. River traffic declined because of the advent of the railroads; mechanical transportation was introduced and improved forms of street surfacing were experimented with. The river was losing its influence upon the life of the City. Broadway began to develop as the City’s main thoroughfare because it paralleled the river for twenty miles, was located upon the higher level uplands, was generally of commodious width and possessed through street car service.

In view of these changing conditions it is plain to see why the center of active business values shifted up Market Street where they had been fixed for the better part of a century, to the new Broadway.

The Plan
The plan proposed in this report is composed of a number of interdependent projects. Each is necessary for fulfillment of the entire plan and to secure the full benefits to be derived from it. A detailed description of each of the component parts of the plan is given later in this report. For purposes of brevity they are here summarized as follows: 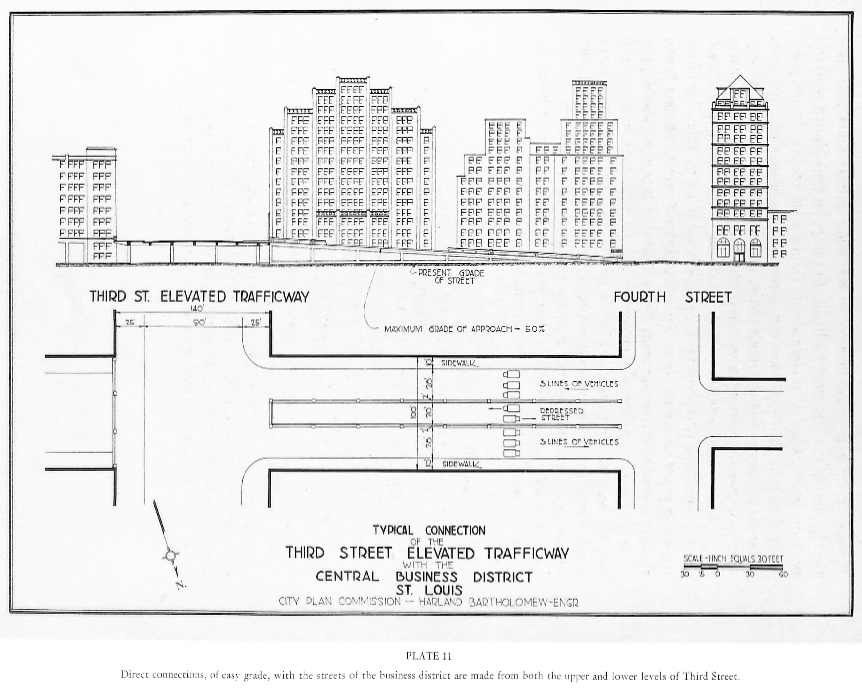 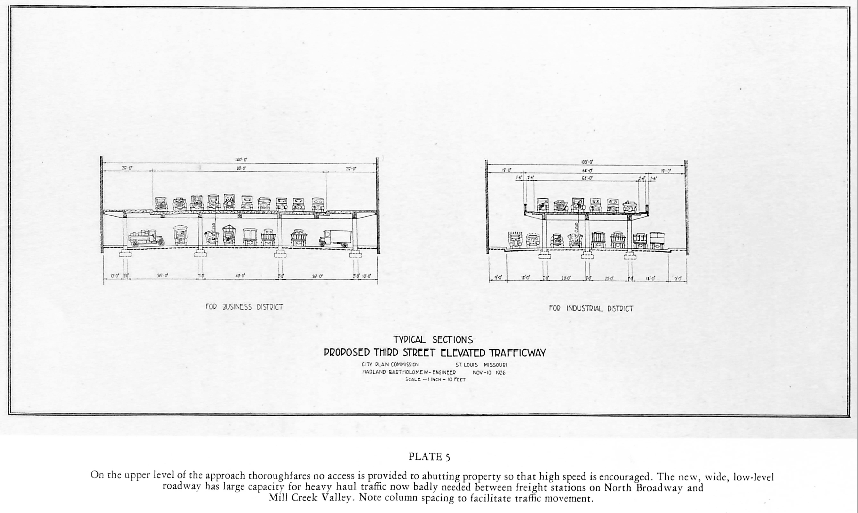 The Riverfront Plaza
St. Louis has long desired the improvement of the central river front. It is impossible to deal adequately with this area without undertaking a plan which will fully comprehend all needs. The double-decking of Third Street and approach thoroughfares to the north and south, previously described, will introduce the large volume of traffic necessary to rehabilitate and enliven the eastern end of the business district. Adequate space for the parking of automobiles is a modern necessity, particularly where large volumes of traffic are to be brought to a business district as contemplated by the double-decked Third Street plan. A large section of be riverfront plaza is consequently made available for this purpose.

The narrowness of the streets and the excessive grades (see Plate 13) upon any of them between Third Street and the river in the entire central portion of the City, make it entirely unsuited for extensive commercial development. Furthermore, the very large number of obsolete buildings makes necessary comprehensive rehabilitation unless conditions are to be left unchanged. The double-decked Third Street would stimulate this entire area but of itself would not constitute anything like a complete solution of the problem confronting this area.

St. Louis has turned its back upon the river. There is a strong demand for making this entrance to the City a only creditable front yard, as well as a place where St. Louis itself may go to see the Father of Waters amid pleasing surroundings. A river front drive is needed.

Procedure
Th acquisition of the right-of-way and the double-decking of Third Street and its approaches, and the riverfront plaza are one integral scheme. They are mutually interdependent and should be simultaneously undertaken. Present powers of the City permit the acquisition of property for streets, highways, parks and parkways, and for the levy of assessment of benefit for property so acquired. This entire plan could be carried out under existing procedure, although considerable inequity might result. Present legislative authority does not permit of the levy of benefit assessment for the cost of structures. This authority should be secured in the form of a legislative enactment at the next session of the Missouri Legislature.

In an undertaking of the magnitude he proposed, private properties do not readily and quickly readjust themselves. In Paris, London, and other European cities, condemnation of additional land beyond that actually needed for given improvement has often been resorted to, and the extra land not needed for the improvement leased or resold under certain conditions so as to insure its development in a manner commensurate with the character of the improvement. This procedure is known as Excess Condemnation. Fourteen states in this country have granted such authority to their cities. If such authority were secured in Missouri through amendment of the State Constitution, it would be decidedly helpful in the execution of this plan. With this authority a tier of blocks between Second Street and the new Third Street, and at the north and south extremities of the riverfront plaza could be disposed of by lease or sale with appropriate safeguards as to architectural design and construction, and with material lessening of the cost of the entire project. 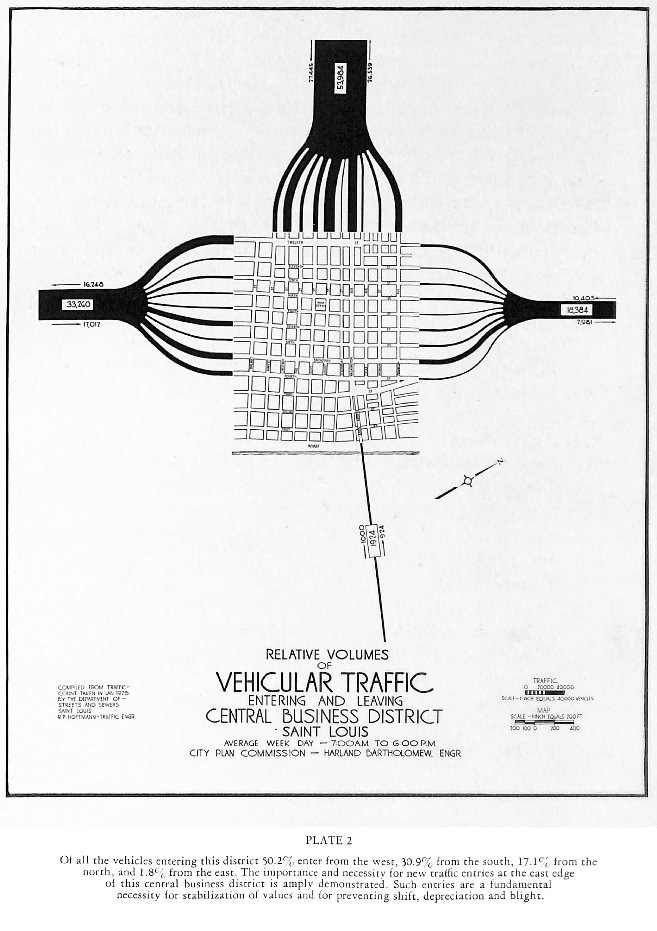 A Plan for the Central Riverfront – St. Louis 1928 by nextSTL.com