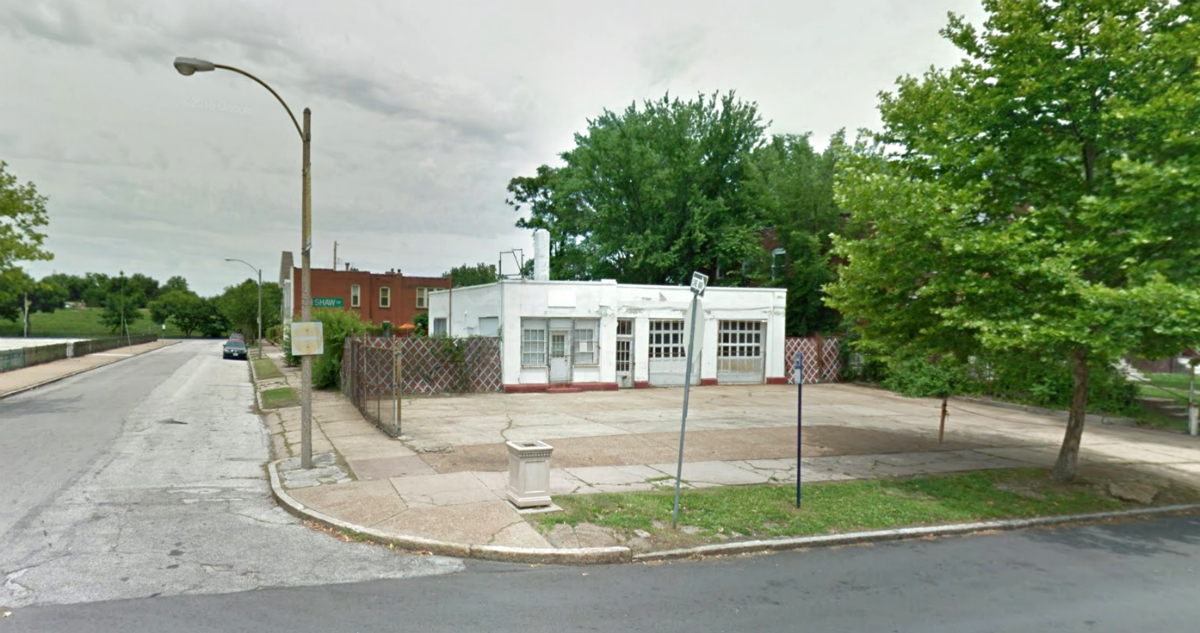 In 2013, the Tower Grove Neighborhoods Community Development Corporation identified the abandoned gas station at 4175 Shaw as both an opportunity for, and a detriment to, the Shaw neighborhood. The development corporation purchased the long vacant building at a St. Louis City tax sale and as a non-profit was able secure funding to complete the necessary clean up of the contaminated site.

As the site was prepared for private investment, TGNCDC released a Request for Proposals (RFP) for the 1,600sf 1924 building sitting on a 10,000sf lot. TGNCDC has now announced that a proposal from restauranteur Dave Bailey has been selected to pursue development of the site.

The proposal, from the man behind restaurants Rooster, Range, Bridge, Small Batch, and the Chocolate Bar, would be a casual burger place, with a take out window and kids menu. The site would be completely renovated, with estimated costs of $400K. A variance will be needed for the restaurant to occupy the building. We’re guessing, but given the popularity of Bailey’s restaurants, this idea should find a lot of support in the Shaw neighborhood.

In a post on the TGNCDC website, Sean Spencer, Executive Director, stated, “Through the process of talking with neighbors, evaluating our survey results and our on site neighborhood open house event, we determined that the neighborhood was interested in preserving and re-purposing the building into a commercial use. David Bailey’s successful track record and experience with high quality historic tax credit projects, experience operating highly successful restaurants, passion for improving neighborhoods with his businesses, financial ability to perform and his commitment to working with neighbors through the approval process made him an obvious choice.”

Assuming it’s successful, 4175 Shaw would mark yet another success for the growing TGNCDC. Sean Spencer detailed some of the organization’s recent projects when he joined the Future Great City podcast [listen here]. Other projects include expanding its tenant screening service The Screen Door (a nextSTL advertiser), a nuisance property becoming a police substation, funding for improved access to Tower Grove Park, a meth house now remade, pushing the redevelopment of the vacant Detonty site forward, and others.

One the worst eyesores of an area of the city seeing significant investment, small pre-WWII gas stations are seeing a new life. Contamination at the sites from leaking tanks and service bays used for decades kept the sites vacant for years, ultimately preserving them for reuse.