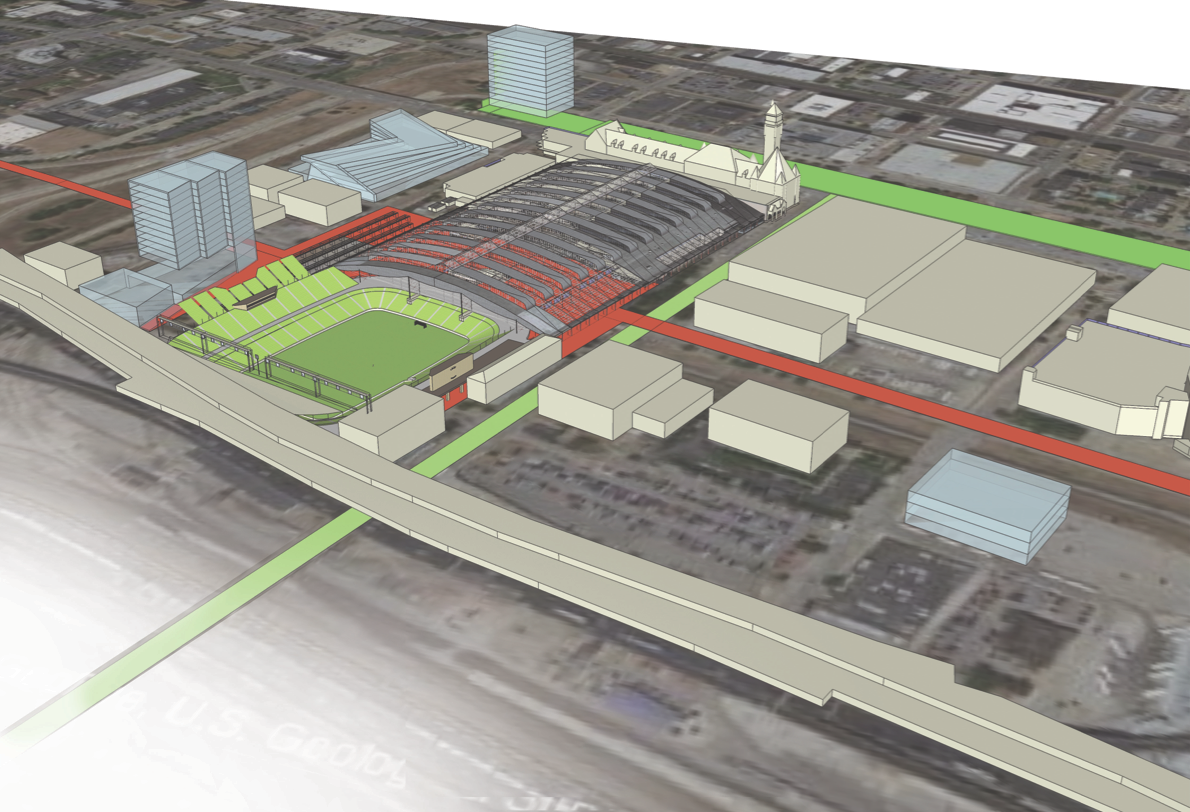 The NFL’s departure may just make St. Louis a Major League Soccer city. The on-again, off-again effort to bring professional soccer to St. Louis has received a shot in the arm in recent weeks from Major League Soccer coaches, the league’s commissioner, local sports talk radio, and social media. After communication from the MLS to Mayor Slay, and back, and from the MLS to Governor Nixon, the league is officially seeking a location for a downtown St. Louis stadium.

An MLS franchise was something of a asterisk on the 60,000 seat riverfront football stadium effort. There were drawings of a tarped second deck with MLS logos, etc., but it was always an afterthought. Which made sense. There was appeal in the multi-tenant idea, but the idea of a fourth professional sports franchise in the city was probably never quite realistic.

As much as one can dislike Stan Kroenke’s charge that St. Louis cannot support three professional sports teams, there’s a kernel of truth to it, in a way. By one measure (an American City Business Journal study), the one used by Kroenke and the Rams, the St. Louis area falls $70B in annual total personal income (TPI) short of being able to support NFL, NHL, and MLB franchises simultaneously.

Now of course St. Louis has outperformed this particular metric for two decades, with three pro teams being well supported and quite profitable. Midwest cities such as Cleveland and Pittsburgh outperform this metric as well, and there’s zero talk that either of those cities could lose a franchise. In fact, St Louis has an annual TPI of $133B versus $118B for Pittsburgh.

TPI is simply one way to estimate of how much a community has available to spend on sports. It’s clear that some communities spend a larger percentage of their income on professional sports. The study assumed the following TPI needed: MLB $104B, NFL $48B, NHL $50B, MLS $14B. The widely varied amounts reflect the number of home games, ticket prices, advertising and sponsorship costs, and other factors.

In short, the departure of the Rams makes it much more likely that St. Louis will gain an MLS franchise, and sooner rather than later. And while one can bend numbers to show a lack of spending power, St. Louis would clearly support a homegrown team.

As it’s become more established, and profitable, the league has favored urban stadiums, seen as a better fit for the sport’s younger demographic. It’s also become more expensive to own a team. Expansion fees are now $100M for a franchise and the average stadium cost is near $150M.

Serious efforts to bring the MLS to St. Louis have come and gone in recent years. Drawings have been produced for stadiums in Collinsville, IL (2008) and Richmond Heights (2010), MO. In Collinsville, an 18,500-seat stadium would have anchored a larger $600M mixed-use development. It was an alluring plan, but there was never enough money behind it. The same was true of a stadium proposed at Hanley Road and Highway 40 (I-64) in Richmond Heights. Drawings show retail, hotels, residences, and a soccer-specific stadium. The city entered into an agreement with the developer, but withdrew after financing wasn’t forthcoming.

In retrospect, the absence of support for the Rams from some circles is glaringly obvious. Other than Enterprise pledging to purchase naming rights for the NFL stadium, the region’s corporate partners weren’t publicly pledging luxury box buys, or advertising dollars. This was a significant difference from the experience of NFL franchises in Indianapolis, Cincinnati, and elsewhere. One can almost see how Kroenke may not have felt the love.

The money involved with an MLS team is significantly less than the NFL, and St. Louis has potential ownership, at least partial ownership, in place. Jim Kavanaugh, co-founder and CEO of World Wide Technology, Inc. is the name mentioned most often. WWT is the second largest privately held company in St. Louis, with $6.8B in revenue for 2014. Kavanaugh has already brought professional soccer to St. Louis with the USL Pro league St. Louis FC, and affiliate of the MLS Chicago Fire.

Kavanaugh graduated from Saint Louis University, where he played soccer as well. According to the St. Louis FC site, Kavanaugh played on the US Pan-American Team and the 1984 Olympic team. He was then drafted by the Los Angeles Lazers as the second overall pick in the 1986 professional soccer draft. Kavannaugh is also part of the ownership group of the NHL St. Louis Blues.

As part of the effort to build an NFL stadium in St. Louis, task force member Dave Peacock reportedly worked significantly on a potential MLS ownership group. Past efforts aside, St. Louis isn’t starting from zero. But any effort to bring the MLS here, and build a soccer-specific stadium shouldn’t follow the NFL effort playbook.

The best guess is that some public money would be involved with a new stadium here. Though stadiums in Columbus, Los Angeles, San Jose, and soon Orlando, have been constructed with private funds, the average public subsidy for MLS soccer-specific stadiums is near 50%. This is only a little less than NFL stadium subsidies, but with soccer stadium cost at roughly 10% of NFL cathedrals, the dollars involved are certain to be a fraction of the NFL ransom. There are several sites that could accommodate an MLS stadium in St. Louis City, the north riverfront, Downtown West, even Grand at Chouteau, among others. The key, as St. Louis has learned with the Rams, is having the support of a team owner, and preferably the league. St. Louis is close.

The north riverfront site is nearly ready to go. It would be the easy choice, but that does not necessarily make it the right choice. The location still suffers from a disconnect with the city. The smaller stadium may present the opportunity to repurpose more existing buildings, but the area is far from being an urban neighborhood location.

The area around Union Station and the soon to be remade 21st Street interchange offers a true seamless connection to downtown. The fan experience of staying in a downtown hotel and walking the Gateway Mall to game, or arriving via MetroLink would be exponentially better than the north riverfront. There is enough land at Grand and Chouteau Avenues, though the location immediately next to a hospital may be a negative. A stadium could also fit along the near south riverfront, or south of I-64 in the area long planned to become the Chouteau Greenway.

What’s clear is that the league has eyed St. Louis for years, patiently awaiting the right combination of ownership, timing, and location in St. Louis. An ownership group is coming together, the timing for local funding and fan support is right. There are stadium site options, but it’s incredibly important that the right site and not the easy site is secured.

For St. Louis, the site needs to be less Chicago’s Toyota Park or KC’s Children’s Mercy Park, and more Portland or Seattle. A comprehensive study of MLS attendance concluded an MLS match loses 260 potential fans for every mile the stadium is located outside its nearest urban core. What’s needed, more than for other sports, is a downtown soccer culture. Fans expect to pre-game in a neighborhood, take transit to the match, and be part of the city.