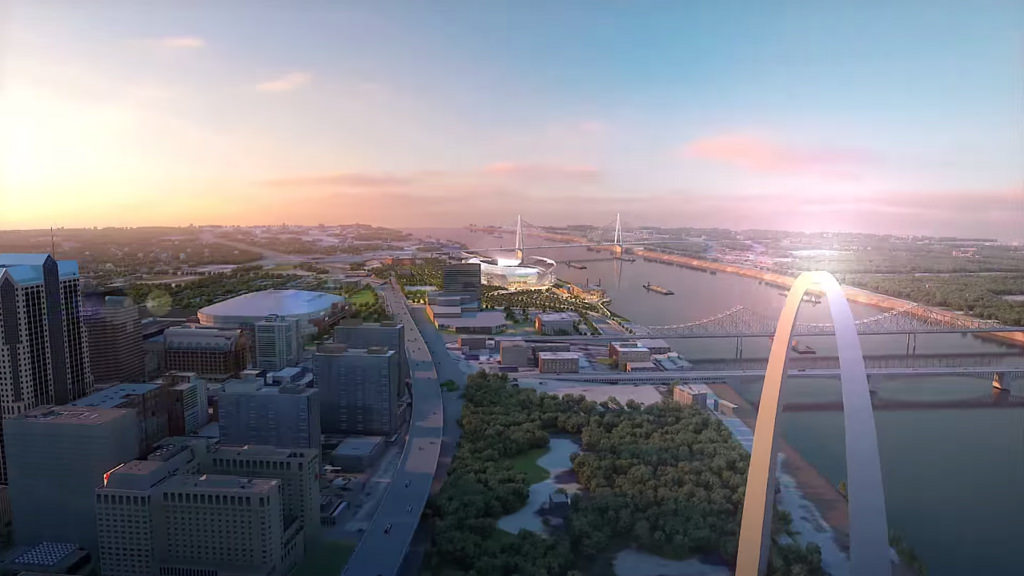 Today, NFL commissioner Roger Goodell told team owners that none of the three markets being discussed for relocation to Los Angeles have presented a stadium plan that would prevent relocation (the text of the commissioner’s report regarding St. Louis is below). Being approved for relocation is not the same as being allowed to relocate, which can only be approved by a vote of team owners.

Exactly which team(s) will end up in Los Angeles will be determined by a vote of owners, with 24 of the 32 needed to approve a move. Three teams, the Rams, Raiders, and Charges have filed for relocation, all hoping to end up in LA. Owners are expected to resolve the LA question next Tuesday and Wednesday at their meeting in Houston.

Only St. Louis has seen any serious stadium proposal produced. In short, Goodell is saying that the St. Louis effort falls well short of satisfying the NFL. It’s a similar message Kroenke sent to the NFL to support his bid to leave the city.

While significant political power, time, effort, and more than $10M has been spent to put together the St. Louis stadium effort, shortcuts have been taken. These appear to be front and center for Goodell. There’s opposition at the statehouse, litigation concerning the need for a public vote, and a financial shortfall with just 11% of the metro region (St. Louis City) contributing directly to the stadium.

In its report to team owners, the NFL cites the arbitration decision that concluded the Rams’ current facility needed $700M to become “top tier”, which is required per the team’s lease. From this, the league concludes, “…the proposal would provide substantially less public support for the Rams than the support to which the club was entitled…”.

With likely just a few days before the long awaited decision comes, more and more scenarios are being offered. 1) Owners could vote for a Kroenke’s move to LA and end the process there. 2) Kroenke’s approved for LA and the Chargers are offered opportunity to share the Rams new stadium. 3) Raiders and Chargers are sent to LA and Kroenke is allowed to move elsewhere (San Antonio? Toronto? London?). 4) Some combination of the above, with St. Louis getting a future team, or the Raiders. 5) Kroenke doesn’t get LA, sells the Rams, who stay in St. Louis, and buys a different NFL team. 6) Just about anything you can imagine.

[nextSTL coverage of the Rams and relocation]

From the Commissioner’s report to NFL owners regarding St. Louis via Daniel Kaplan of SportsBusiness Journal:

The State, City and RSA believe that they have all necessary authority in connection with the public funding. Nonetheless, nearly three-fourths of the Missouri General Assembly members have publicly expressed their opposition, arguing that such public funding should be approved by the legislature or by public vote, and, as noted above, that issue is in litigation. The prospect of opposition by a substantial majority of the Missouri General Assembly, as well as the pending litigation, could result in appropriation risk and uncertainty that cannot be entirely dismissed.

The public funding obligations would be contingent on, among other things, $300 million of NFL League-level funding, $250 million from the Rams, and a minimum of $160.4 million of net proceeds from PSLs. This proposal would require the League to provide $100 million more than the maximum amount for which any club is eligible under the League’s G-4 program.

Notwithstanding the fact that the amount of public funding proposed by the City and State is substantial, the Rams have expressed concerns that the market potential would not yield an economic return sufficient to justify the very substantial private investment (for both construction as well as 30 years of maintenance and improvements) that the Task Force’s proposal would require. The Rams have estimated that the club’s overall financial position would deteriorate under the proposal, even utilizing the revenue projections of the public authorities. In addition, the proposal would provide substantially less public support for the Rams than the support to which the club was entitled, according to the independent arbitration panel, under the existing stadium lease; public officials estimated that the cost to complete the renovations endorsed by the arbitration panel would have been about $700 million.

The factors discussed above—including the size of the private investment required in this market (including additional amounts from the League) and the risk attributable to political opposition—raise significant concerns about the certainty and long-term viability of the Task Force’s stadium proposal to retain the Rams.