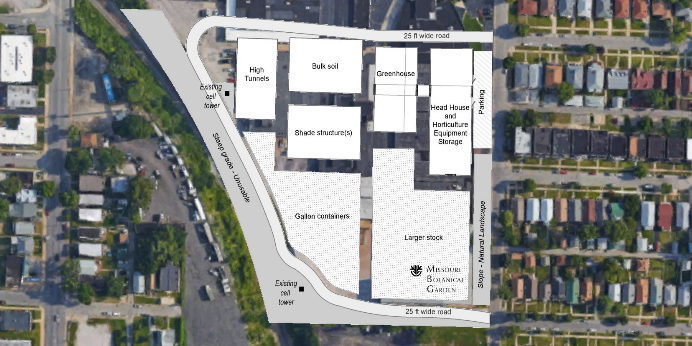 The Missouri Botanical Garden is set to expand its holdings in a big way. The garden has received a donation of nearly 6.5-acres of land just south of Tower Grove Park and near the existing garden. The gift, from longtime Garden supporters the Oertli family, will alleviate space constraints within MOBOT’s existing footprint, providing greenhouse space to maintain permanent collections and conduct research and propagation.

According to MOBOT, the new facility will eventually allow the Garden to produce at least 95 percent of the plant material for its annual displays, most of which currently must be purchased. The facility is not planned to be open to the public, but tours are planned. Construction of the Oertli Family Hardy Plan Nursery is scheduled to being soon, and the facility should be growing plants by the end of this year.

According to a press release, the Oertli family has sold a portion of the 16-acre complex at 3400 Morganford to the employee-owners of Guarantee Electrical Company, which it has owned since the 1940s. The remainder of the site will become the MOBOT nursery, with an address at 3405 Bent Avenue. “We believe this is a true win for everyone involved, including the largely residential Tower Grove South neighborhood,” said Rick and Roger Oertli, co-managing members of the family LLC that controls the property, in a released statement. In addition to its properties near the botanical garden, MOBOT owns Shaw Nature Reserve, 2,441 acres on the Meramec at Highway 100 and Interstate 44. Land to establish the nature preserve was purchased in 1925 and was originally set up as something of a refuge for the Garden’s plant collection from the city’s smoke pollution of the 1920’s. Today it is open to the public for hiking and is used for education and research.

More from the MOBOT press release:

Plants grown in the new facility will be hardy herbaceous as well as woody perennials, with a focus on wild-collected specimens. Growing taxa of wild origin serves as a tool for both conservation and education purposes and allows the Garden to conserve important genetics and support wild populations through ex-situ conservation while providing an incomparable learning opportunity for horticulturists.

“This is an important step in our mission to conserve some of the world’s rarest and most endangered plant species while supporting the Garden’s displays and permanent collections in a more sustainable way,” said Andrew Wyatt, Vice President of Horticulture and Living Collections. “Horticulture is more than a love of gardening. It’s a science that includes understanding propagation and cultivation. This new nursery greatly strengthens the Garden’s capacity for this important work.”