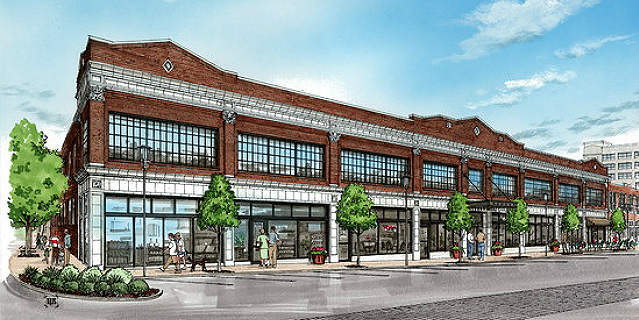 A four-alarm fire that filled the city’s sky with smoke early this afternoon may not derail renovation plans for an historic Downtown West warehouse, according to the developer. The two-story, 69K sf building at 1900 Washington Avenue dates from 1919 and was weeks away from being transformed into loft apartments and retail space.

“It looked worse than it is, but it was bad,” Michael Schwartz, Director of Development for Rothschild Development Corporation told nextSTL.

Planned were 36 loft apartment with ground floor retail. The many once vacant warehouses of Downtown West have largely been redeveloped as apartments and condos. This building was among a few that had remained vacant. Despite today’s damage, Schwartz expressed optimism that redevelopment would continue as planned. Although he has not be allowed inside the building as of this evening, Schwartz verified that the facade remained intact, and that all the structure’s steel members remained standing.

The building itself was steel and masonry with wood joists. Though the fire is a setback and will add to the project’s expense and timeline, the working assumption is that insurance will cover the cost of damage. The next steps include insurance and engineering assessments.

Rothschild Development has owned the property, known as the Gordon Buell Building, since 2005, announcing redevelopment plans 18 months ago. Financing for the project was finalized in this November. While the cause of the fire is not known, St. Louis Fire Department Fire Captain Garon Mosby told the Post-Dispatch that someone may have entered the vacant building and started a fire in an effort to keep warm in the freezing temperatures. Schwartz told nextSTL that the development company had been on site several days a week and had previously had problems with people breaking into the building.

Efforts to secure the building began tonight with boarding windows. “There was significant damage, but I think we’re going to be OK,” Schwartz told nextSTL. “Now that the fire is out and everyone who helped is safe, we’re going to do everything we can to move forward.”