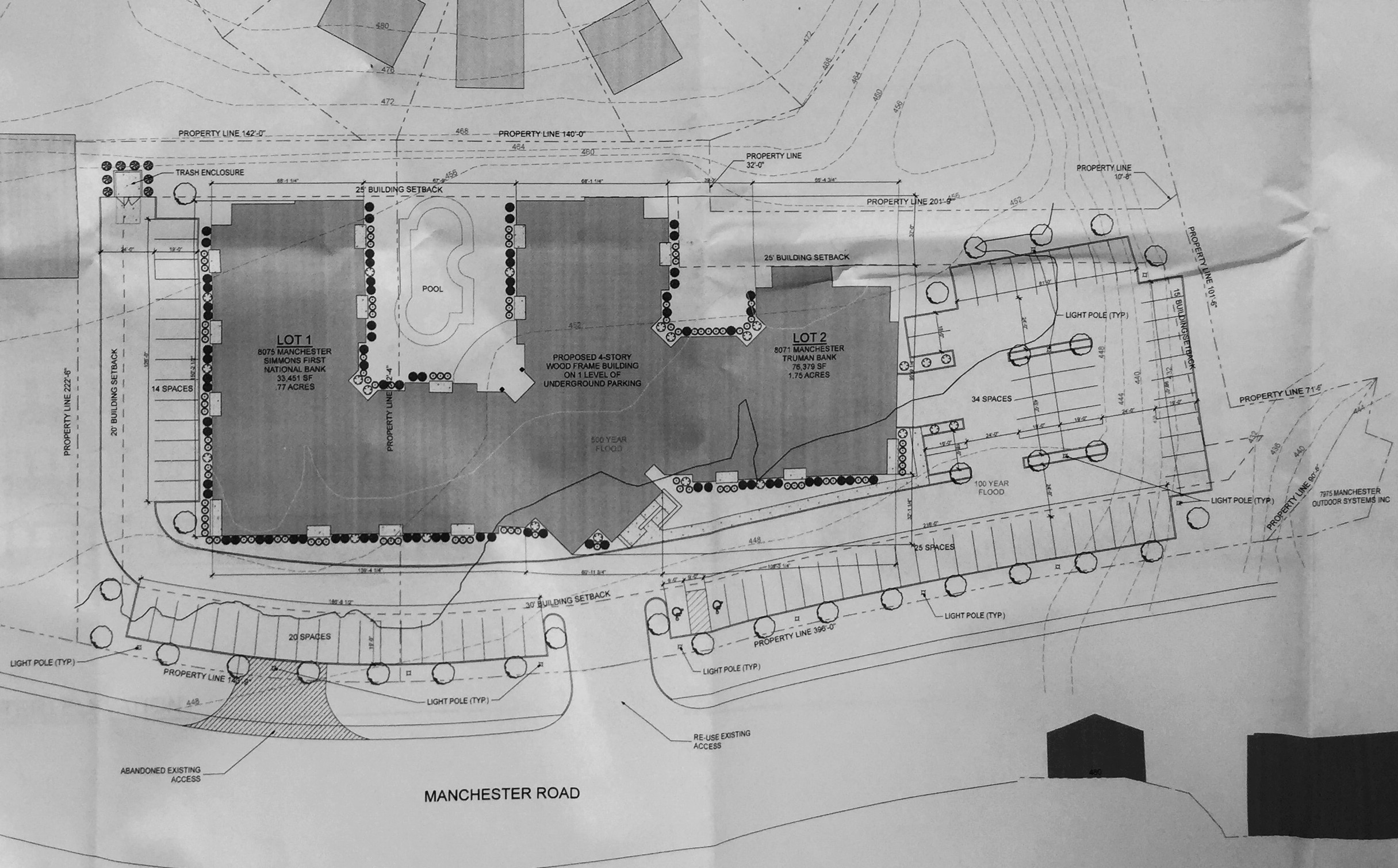 A high profile vacant site at Manchester and Hanley Roads may see a large apartment development if plans by Garrison Development of Kansas City come to fruition. The project, at 8071 Manchester, received a first hearing at the Brentwood Planning and Zoning Commission public hearing yesterday where the plan was met with a generally positive reception.

The early concept shows a four-story, 159K sf building with 108 apartments and 162 parking spaces. The building would be comprised of 37 one-bedroom, 59 two-bedroom, and 12 three-bedroom units. Sixty-nine of the parking spaces would be on one level underground. The rest would be surface spaces.

The project remains several steps away from becoming reality, with more meetings and review from the City of Brentwood, refined plans, then financing. Though at a heavily trafficked intersection, the site remains challenging as Black Creek necessitates a significant setback to the east. The more than 2-acre site was once home to standalone Burger King and Memphis Best Bar-B-Que restaurants. Truman Bank acquired the site for $1.975M in 2007, where the bank once planned to build a new headquarters, moving from Clayton. Founded in 1988, Truman Bank was forced to close in 2012 after accumulating failed commercial real estate loans.

All assets were transferred via the FDIC to Simmons First National Bank, the current owner. The property has recently been listed for $1.395M. According to marketing materials, the site has 485 feet of Manchester Road frontage and the adjacent Manchester-Hanley intersection sees more than 40,000 cars each day. The intersection is the target of a major road project by St. Louis County. Plans emerging nearly a decade ago would have widened both Hanley and Manchester near the intersection and constructed what is called a Median U-Turn Intersection.

In short, these operate by drivers wishing to make a left turn passing through an intersection, performing a u-turn, then turning right as they approach the same intersection from the opposite direction. The proposal was meant as an alternative to an earlier single-point interchange which would have introduced a flyover and grade separation at Manchester.

The Median U-Turn Intersection was deemed an improvement which would be less expensive, reduce physical and visual impact, improve pedestrian, bicycle and transit access, as well as access to local businesses. The Maplewood MetroLink light rail station is less than 1,000ft east of the intersection. Initially, construction was set to being in 2012. There has been no update on the project for several years. A Clayton-Hanley corridor study was completed, but funding not identified. Videos illustrating how the intersection would function are below: