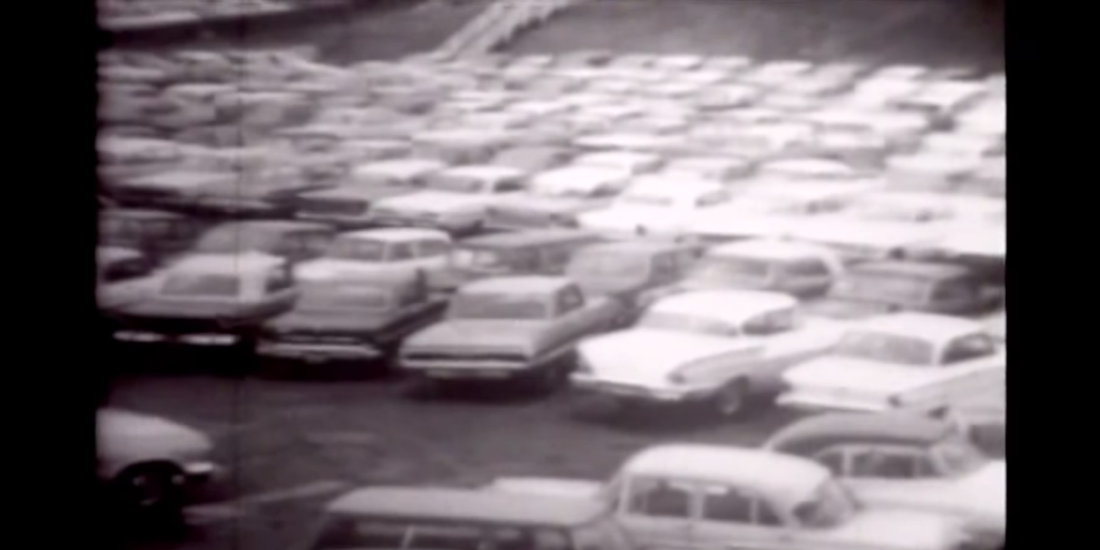 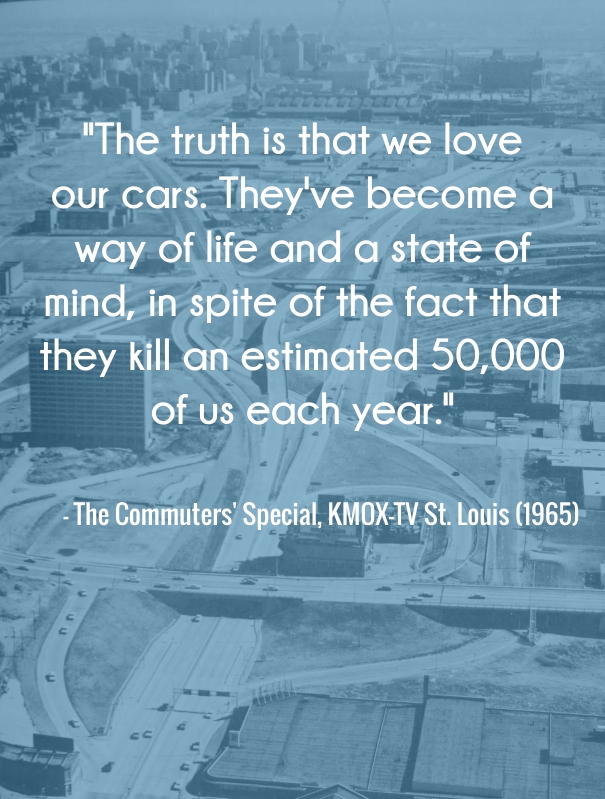 In St. Louis, where congestion is among the lowest of any major city, we’ve virtually solved the traffic problem, as it were. The solution has been for jobs and people to abandon St. Louis City, sprawl across a large metro area, and build enough lane miles to accommodate the change.

St. Louis is second to only Kansas City, MO in number of highway lane miles per capita. While the region’s population grew at a modest rate, the number of cars on the road, and miles driven, has continued to increase, we’ve built thousands of miles of new and larger highways. The population of St. Louis City, St. Louis County, and St. Charles County have collectively grown just 1.6% since 1970.

The challenge of accommodating the American family automobile has been clear for more than half a century. In some significant ways, the crisis was more acute in the 1950s and 1960s. Viewing the segment of video below, it’s obvious that the issue was clearly understood, and what we would call “progressive” solutions were promoted. What wasn’t known, was perhaps the solution St. Louis and its residents, as well as other cities, would pursue.

Much of the rhetoric at the time would sound very familiar to urbanists today. (“There’s no conceivable future for a circle of suburbs from which the central city has rotted away.”) So much has changed since that statement was offered. Considering what has come to pass, what arguments are being made today, and what happens next offers endless fodder for consideration.

That the city and nation were in the midst of a transportation revolution was clear. Just how clear is made obvious in the clip below from “The Argument for Rapid Transit in St. Louis – 1965”:

Nobody knows who invented the automobile. Some authorities say it wasn’t really invented at all, but assembled out of bits and pieces that had been invented for other types of machinery long before.

It did, however, make its first appearance on the roads of Europe and America about 80 years ago. This was in the Gaslight era, a time when people were reading and discussing a classic science fiction chiller called Frankenstein.

Frankenstein, of course, was a man who made a monster. He didn’t invent it, he assembled it out of assorted bits and pieces, and at first it was docile and easy to get along with but somewhere along the line the monster began getting out of hand and eventually it hunted its creator down and destroyed him.

The parallel between the story of Frankenstein’s monster and the American family automobile may be trite and a trifle far fetched, but it’s worth consideration just the same.

In its early days the automobile was an attractive novelty that was owned mainly by rich people and was of very little real consequence to anybody else. But by 1964 the automobile
had substantially taken over the entire American economy.

Last year nearly 12 million Americans, or one in every seven of our entire labor force, worked either directly or indirectly for the automobile, making automobiles, selling automobiles or
working in automobile related industries.

Last year we spent more than eight billion dollars building new automobile roads and highways, and some three billion more repairing old ones. And practically all of us were paying for automobiles on the installment plan for a total of about 22 billion dollars in automobile finance credits.

Finally, and usually once or twice a day we had to park all these automobiles somewhere away from home. There is no estimate of the total American real estate acreage devoted to parking lots and parking garages, but the 72 million cars now in this country probably require something more than 500 square miles for off-street parking.

In the country, in the city, in the suburbs, we continue to lay out the endless acres of concrete and blacktop ultimately to be paved with a hard shell bodies of millions upon millions of two-doors and 4-doors, fast-backs and slow backs, flat fours and straight sixes and V-8s.

In variety and numbers to stagger the imagination. And more automobiles are on
the way. Each year we consign about five and a half million to the scrap heap and to
the auto graveyards along our suburban and rural highways, but each year we manufacture more than seven million new automobiles, or a net annual addition of over two million to the
national total.

We have in fact become a nation of automobile owners and drivers, and the truth is that we love our cars. They’ve become more than mere possessions. They’ve become a way of life and a state of mind, in spite of the fact that they kill an estimated 50,000 of us each year.

We have become fascinated by them exactly as Frankenstein was fascinated by his monster, and this has created the great urban dilemma of the mid-century. America obviously isn’t going to stop buying or using automobiles in ever-increasing numbers, but equally obvious, something will have to be done about the traffic in our metropolitan areas or our automobiles are certainly going to choke our cities to death in the classic Frankenstein tradition. 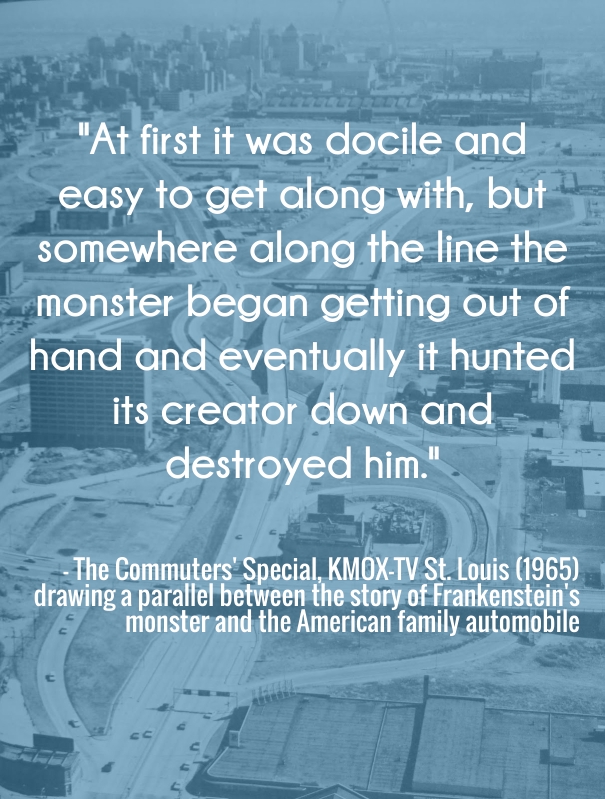