The full draft St. Louis riverfront stadium project is below. It runs 58 pages of definitions, clauses, and financial details. Much was already known: an NFL owner is expected to put $250M into the stadium, the NFL’s loan program another $200M. The plan anticipates at least $160M in personal seat licenses (PSLs).

The total cost to the City of St. Louis would be $207.5M. While the “City Financing Amount” remains at near today’s annual commitment, payments are scheduled to extend for 35 years, to 2051. Payments of $5M for eight years, $5.5M in 2024, and $6M annually thereafter represent cumulative funding of $207.5M. Other funding includes state payments of $10M per year rising to $12M to 2051, a total of $415M. A bond issue would convert the $158M naming rights agreement recently made to cash for stadium construction. State brownfield and MDFB tax credits would comprise the final funding component.

The math can be viewed more than one way. According to the draft proposal, the city’s contribution to the $1B project would be $145M, or just at the 15% contribution for which some supporters had been aiming. The cost to the city of paying off bonds to cover that $145M appears to be the aforementioned $207.5M. There are basically finance charges. The same as the $280M Edward Jones Dome is being paid for by the city, St. Louis County and the State of Missouri with $24M annual payments for 35 years, or $840M. The total city commitment to pay off bonds to build the Edward Jones Dome is $210M ($6M x 35yrs).

Perhaps the most interesting, though unsurprising news was relayed by David Hunn at the St. Louis Post Dispatch. Hunn writes that NFL Vice President Eric Grubman told him the NFL “considers naming rights and even game-day taxes — on tickets, hotdogs, parking and beer, for instance — revenues that belong to team owners, not to the public.” This means, in the NFL’s view, that such revenue should be credited as a team contribution to the project, and not public money. In effect, this equates to tax increment financing (TIF) for all NFL activity, because as Grubman states, “Whether on tickets or parking, that tax wouldn’t exist but for the activities of the team.” 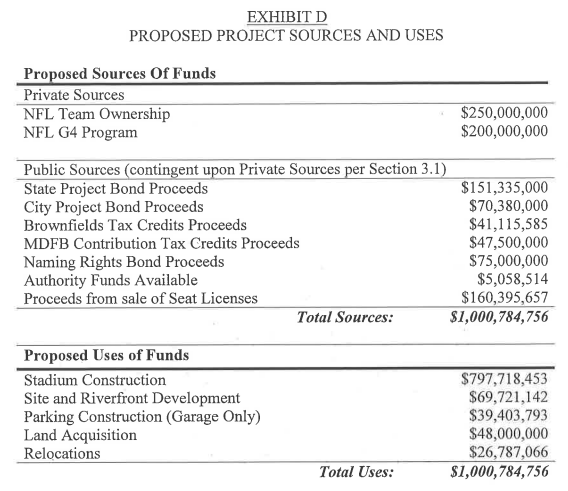 Section 3.1. Private Funding Contingency. The Authority currently estimates that the total Project Costs will be approximately $998,000,000, as more particularly shown on the Proposed Project Sources and Uses attached hereto as Exhibit D and incorporated herein by reference. It is the express intent of the Authority, the State and the City that their public funding pursuant to this Agreement, including pursuant to Article IV hereof, be committed to the Project only upon the binding commitment of the NFL and the NFL Team to also fund not less than $450,000,000 of the Project (representing not less than $250,000,000 from the NFL Team and not less than $200,000,000 from the G4 program administered by the NFL or other sources) as shown on Exhibit D. Notwithstanding anything to the contrary, the issuance of the Project Bonds and the performance of the State and the City under this Agreement shall be expressly contingent upon the receipt of evidence of the satisfaction of all of the following conditions (the “Private Funding Contingency”) by , 2017 to the reasonable satisfaction of the parties hereto:

(a) The NFL irrevocably commits to a contribution from the NFL G4 program (or from other funds) for the Project of not less than $200,000,000;

(b) The NFL Team signs a lease, Sublease or other binding commitment (the “NFL Team Lease”) to play NFL football games in the sports facility constructed as part of the Project for a term of not less than 30 years or the term of the Project Bonds, whichever is longer;

(c) The NFL Team signs a binding and enforceable non-relocation agreement with the Authority that includes specific performance and injunctive relief provisions, pursuant to which (A) the NFL Team will irrevocably and unconditionally commit and guarantee to play all its home pre-season, regular season, and post—season games at the Project for a term of not less than 30 years (subject to a limited number of NFL-approved neutral site games and other customary exceptions), and G3) the NFL Team will be required to maintain its membership in the NFL during such term and will be prohibited from (1) relocating from the City, (2) applying to the NFL to transfer to another location outside of the City, (3) entering into or participating in any negotiations or discussions with, or applying for, or seeking approval from, third parties with respect to any agreement, legislation, or financing that contemplates or would be reasonably likely to result in, any breach of the non-relocation agreement, and (4) terminating the non- relocation agreement during the term of the NFL Team Lease;

(e) The Authority receives proceeds from the sale of seat licenses or from other funds for the Project in an amount of not less than $160,000,000;

(f) The final closing of any financing transactions necessary to effectuate (a)-(e) above; and

(g) The delivery of certifications from the Authority and the Sponsors (or their authorized representatives) acknowledging the satisfaction of the Private Funding Contingency in all respects.