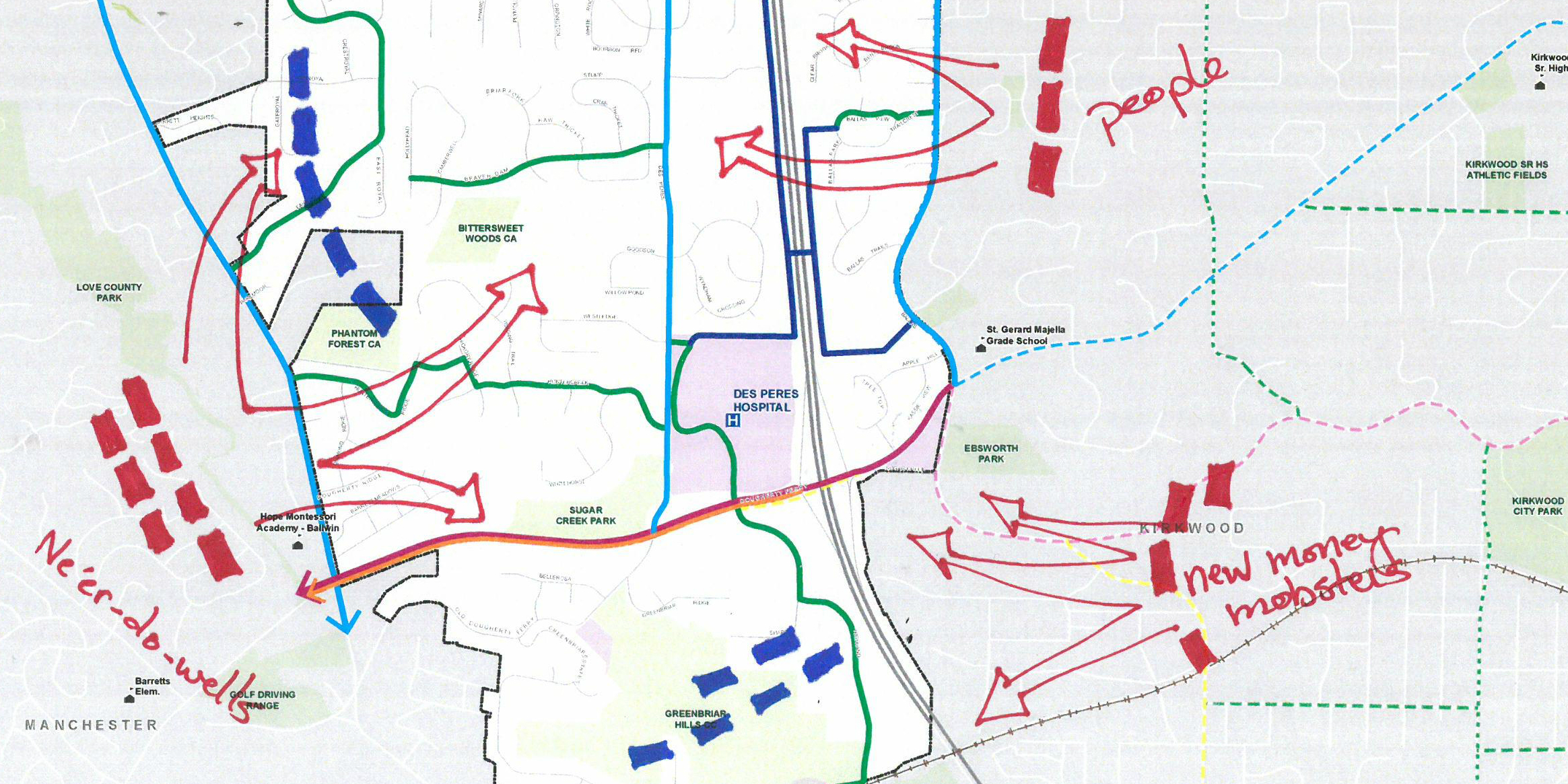 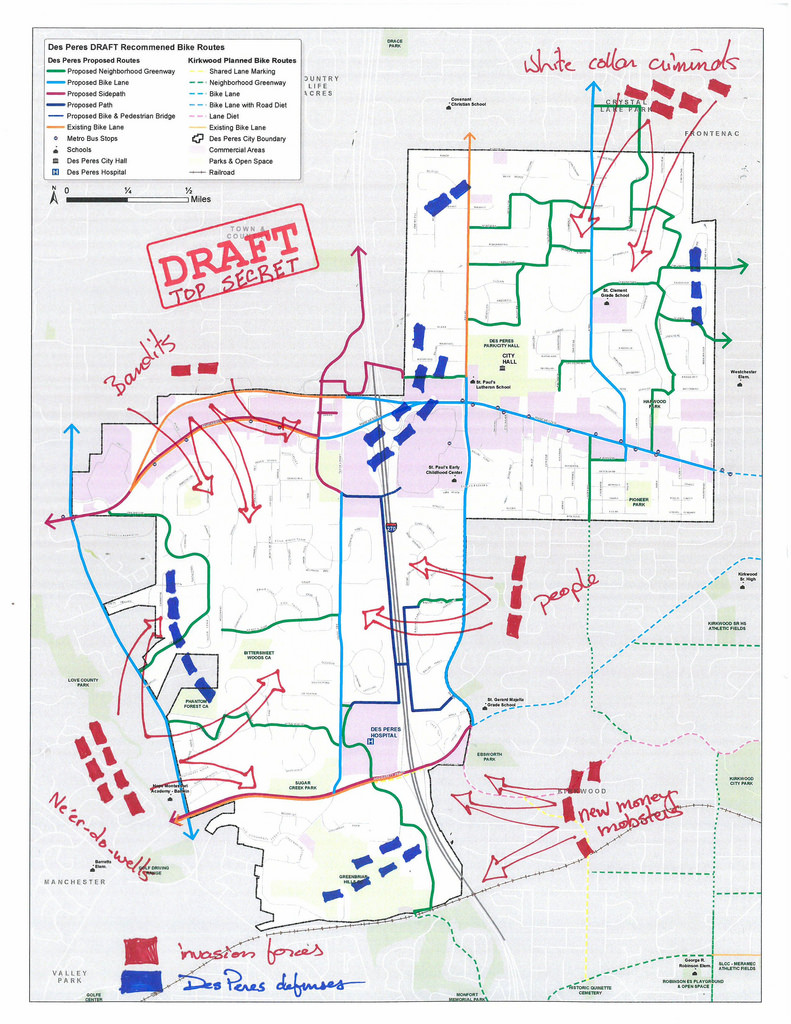 nextSTL has uncovered top secret invasion plans for the city of Des Peres, MO. While some scoffed at a Des Peres resident recently quoted as saying, “We don’t want to be invaded. We’re not in favor of making ourselves a target for the outside community,” the fear expressed appears to be justified. A source has provided nextSTL with a map of the invasion plan showing forces amassing on the Des Peres municipal border.

According to the map exclusively obtained by this site, it appears Des Peres may see an onslaught from multiple directions. To the southeast is shown a brigade of “new money mobsters”, seven units of “ne’er-do-wells” to the southwest, a small contingent of “bandits” to the northwest, “white collar criminals” to the north, and “people” to the east.

While the invasion appears well planned, speaking with a burglar well-known to St. Louis City, Clayton and Maplewood police forces, nextSTL was told that until and unless MetroLink reaches Des Peres, residents are unlikely to be burgled. “Does the train go there? Then I don’t go there,” the thief told nextSTL.

Plans appear to be at an advanced stage, yet an invasion could be thwarted if plans for bicycle and pedestrian infrastructure fail to move forward. “I see no way to proceed if there aren’t navigational aids, if sidewalks are bumpy, or bike lane markings faded,” confessed a ne’er-do-well reached on the front lines via SnapChat.

But seriously, opposition to sidewalks and bike paths based on not wanting to bring a criminal element, “unwanted strangers”, and “people” to one’s community is silly. Concern about a project that would change one’s community is not. The whole $2.7M, 15-year plan began when 30 percent of Des Peres residents responded to a city survey rating walking and biking paths as a high priority for the community.

The first community presentation by project planner Trailnet, a non-profit that advocates for and plans bicycle and pedestrian infrastructure in the St. Louis area, brought out the opposition. A second presentation was reportedly met with 100 residents more or less evenly split on the project.

A TV news report by Fox2Now covering the event described the planning as “fancy bike and walking paths” “along busy roads” and “so called “greenways” through neighborhoods”. People should be vigilant about plans for their community. Dropping a pedestrian and bike bridge over I-270 from a low-density residential neighborhood to a suburban shopping mall is smart, and saves $8.5M.

If I were to guess, Des Peres will support more and better bicycle and pedestrian infrastructure. While opposition to something like this can be loud and swift, I’m guessing most Des Peres residents favor the project, or are rather indifferent. Of course, if done well, there will be an invasion, of the next generation of families to buy homes and build community.

It’s an important endeavor to introduce real access and recreational amenities to a community, especially one lacking basic infrastructure for anything other than cars. But bike lanes and greenways in Des Peres aren’t as efficient as building connections in urban environments where existing streets and paths create a functional network. Residents of Des Peres should be able to choose to live without sidewalks. If they do, the money planned for this project would be better spent in an urban area and not trying to fix a development pattern inherently hostile to people walking and biking. 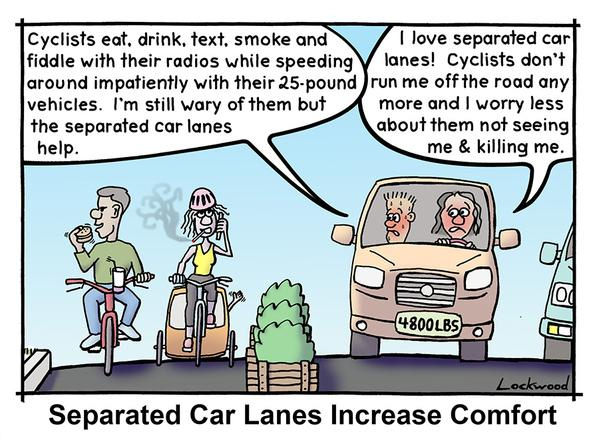 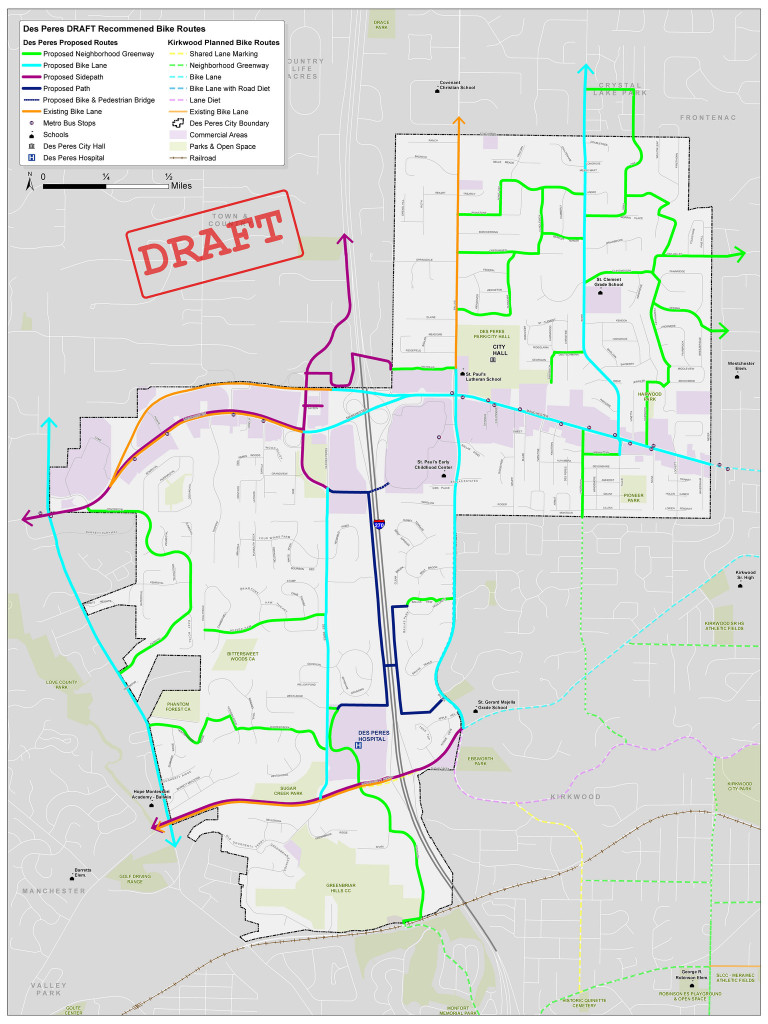 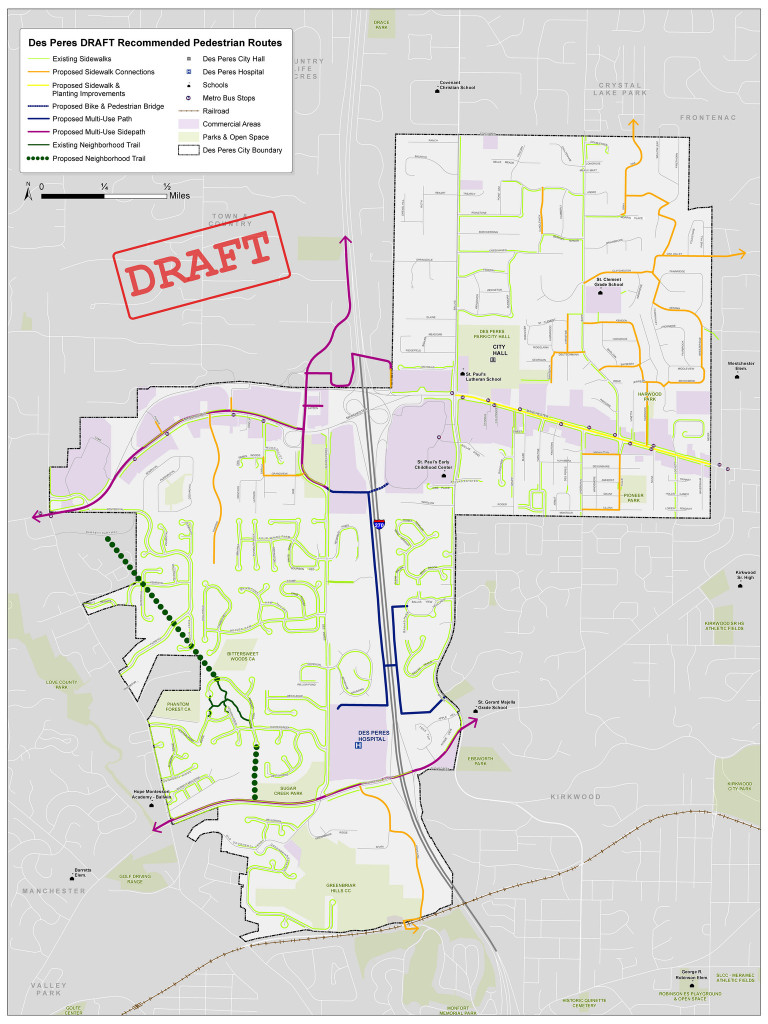