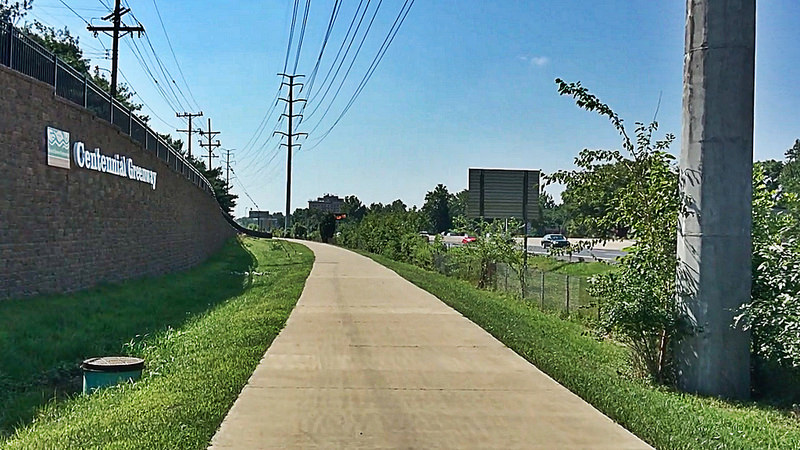 A few weeks ago my four year old son wanted to go on a bike ride. He’s been pedaling around the parking lot of a vacant school near our home over the past two years without training wheels. He’s pretty good on his bike, for a guy who’s four.

But he’s kind of outgrown the parking lot, and the sidewalks which worked well for his balance bike. A trip to Hilton Head Island this year, and several miles of riding on bike paths each day, really spoiled him (and the rest of our family).

Returning to St. Louis I became a little more determined that we make bike riding a more common activity. The nearest bike path to our home is the Centennial Greenway that begins in Clayton’s Shaw Park. Because of poor street crossings and a lack of protected on-street infrastructure, we can’t easily ride there from our house. 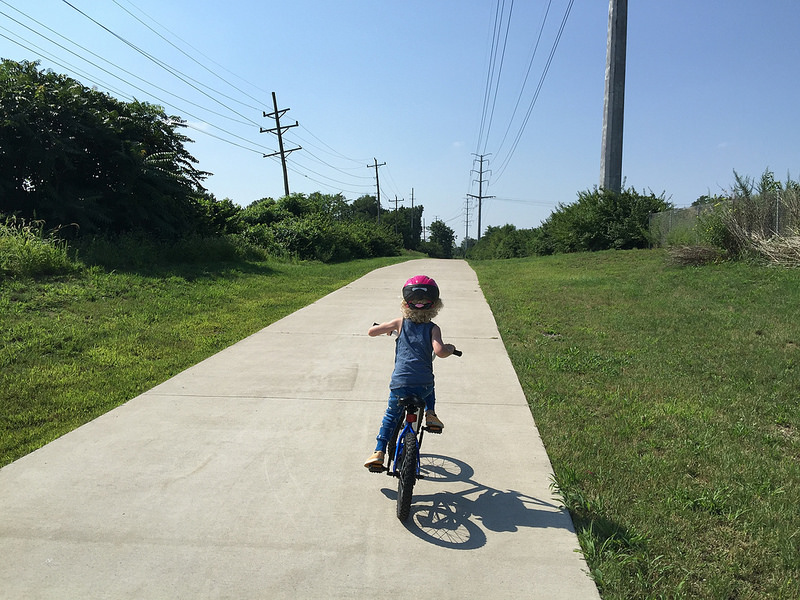 Having to drive to ride perhaps best highlights the essential problem with bicycle infrastructure across St. Louis. Places aren’t connected. Investment in addressing these barriers would have a greater impact on mobility and safety than the long linear (and cheaper and easier) projects we see.

Anyway, we drove to Shaw Park, unloaded our bikes and headed off to explore the Centennial Greenway. A quick glance at the map showed we could ride two miles north to Olive Boulevard and then likely turnaround for our ride back.

The first mile of the greenway is pretty easy. You’re looking at mulch piles and the backs of buildings, but it’s a good easy ride. Crossing Ladue Road isn’t bad. It’s nothing more than a simple crossing, but the surface treatment and a little landscaping give drivers a cue that people may be present. Surface treatment in the strip mall driveway also seems to work OK. It’s clear to people on bikes where to go, and there’s some indicator to drivers that something is different, that they should be aware.

The next section is nice, skirting the Ladue Crossing shopping center and crossing a lightly travelled street that serves solely as a long driveway from Delmar Boulevard to the shopping center (it’s an odd, wasteful street made sort of necessary by a lack of street connections in the surrounding suburban development). Then you come to Delmar Boulevard.

Crossing Delmar Boulevard is intimidating, hazardous, and ruins the greenway experience. The crossing is convoluted, unclear, and seemingly not designed by anyone who would actually use it. Here, the bicycle pedestrian infrastructure mantra of if it doesn’t work for children or the elderly, then it doesn’t work, fits perfectly. 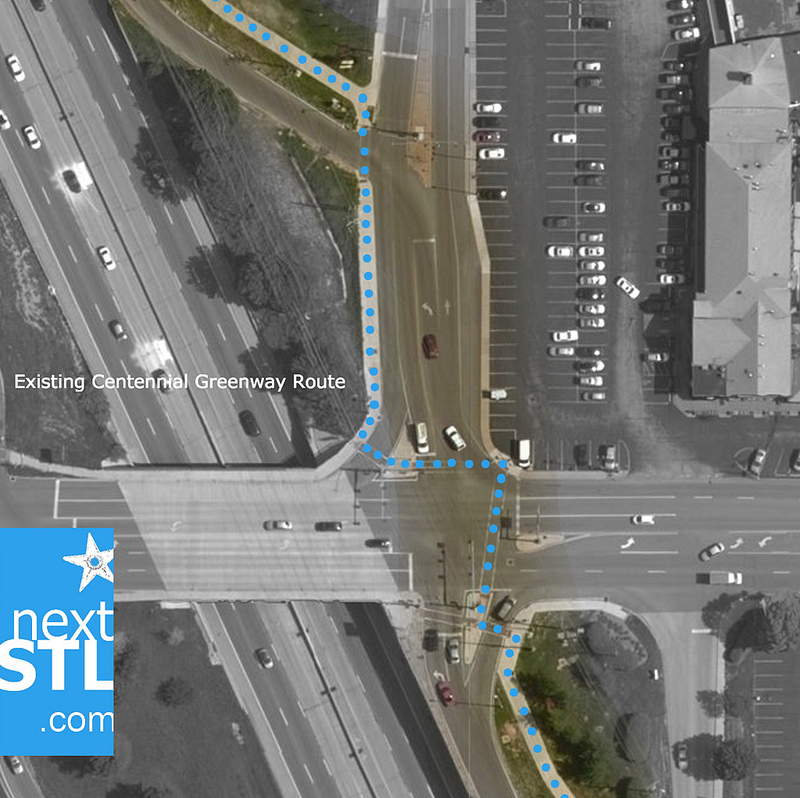 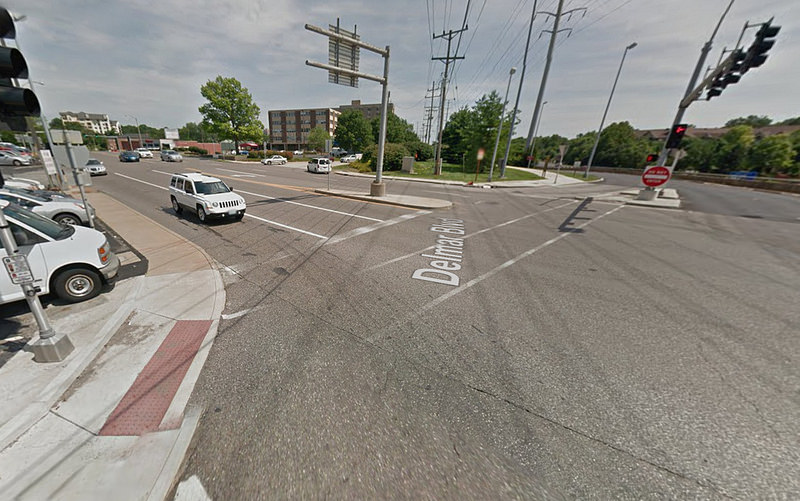 {the view of Delmar at McKnight looking southeast}

{the view looking north across Delmar to McKnight}

So that’s five crossings. For us it ended up being seven…seven crossings at one intersection. Crossing the first off-ramp turn lane, we kept going straight. The tiny island isn’t big enough for even two of us to be there comfortably, it doesn’t feel safe. We reached to southwest corner only to discover you can’t cross Delmar from there, so we turned back, then crossed Delmar, squeezed onto the tiny patch of space allotted on the northeast corner, and so on.

The intersection can and should require just two crossings, one at Delmar and one at McKnight. The quick image below illustrating how this should work doesn’t show the cost, complications with the state DOT (Delmar is a state route), etc. But infrastructure like the greenway is only as good as it’s worst part, and this is it. The big investment doesn’t work unless this works. 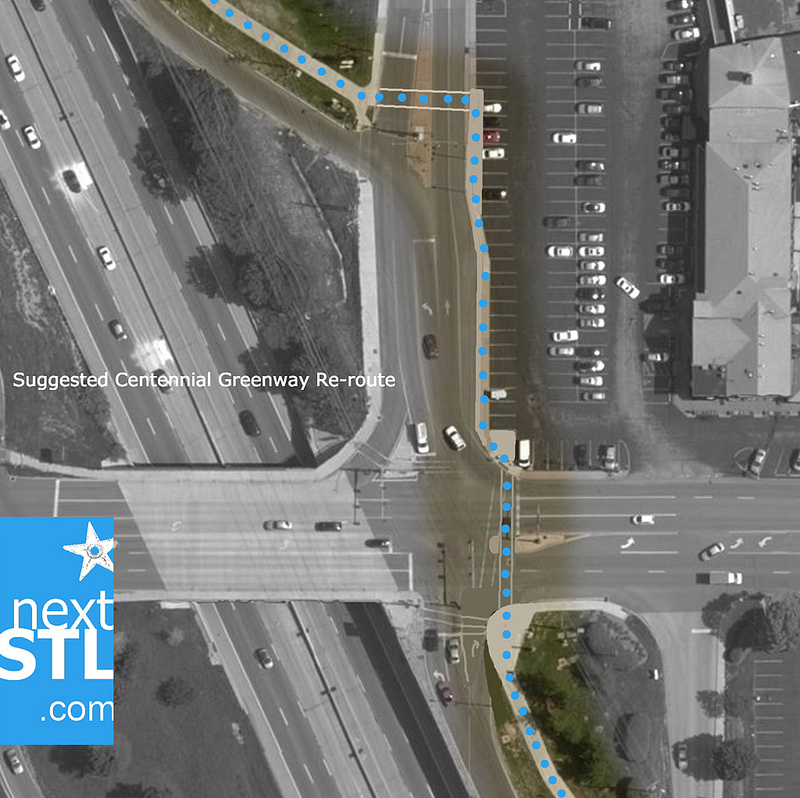 In the future, we won’t be crossing this intersection. On this occasion we did. The next mile of the greenway is terrible. You ride below power lines and alongside a deafening Interstate. The video below is likely the worst stretch. The endpoint at Olive makes it clear that it’s time to turn around as you’re staring at the I-170 at Olive interchange.

The Centennial Greenway experience along I-170:

In general, if I understand the idea correctly, greenways are meant to provide recreational space, and a less interrupted path between our neighborhoods and towns. This doesn’t work when the points of conflict don’t work. In fact, putting all our resources into safe and easily understood intersections would do more to connect places than strips of concrete that fail where needed most.

Although billed as connecting Clayton, Ladue, Olivette and University City, and as an option for exercising, commuting and connecting to nature, the Centennial Greenway doesn’t work for my family. Will we be back? Maybe, eventually (and turn around at Delmar) since there are so few alternatives. What choice do we have? We’ll also ride bikes much less that we would if there were better, safer crossings, and usable bicycle infrastructure nearby.