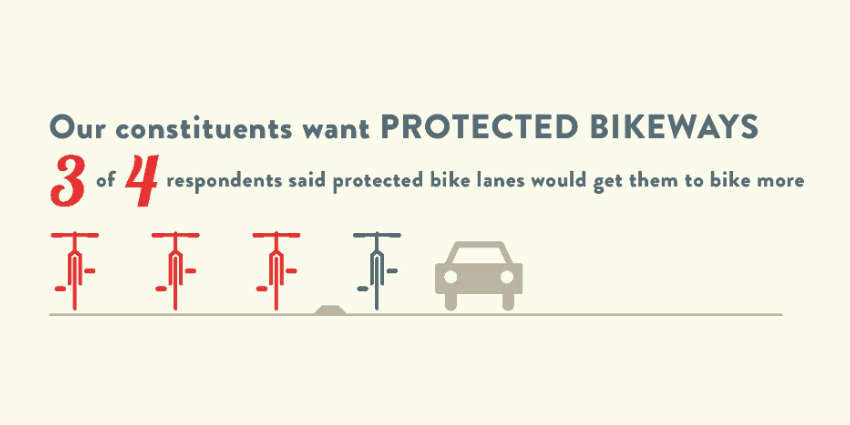 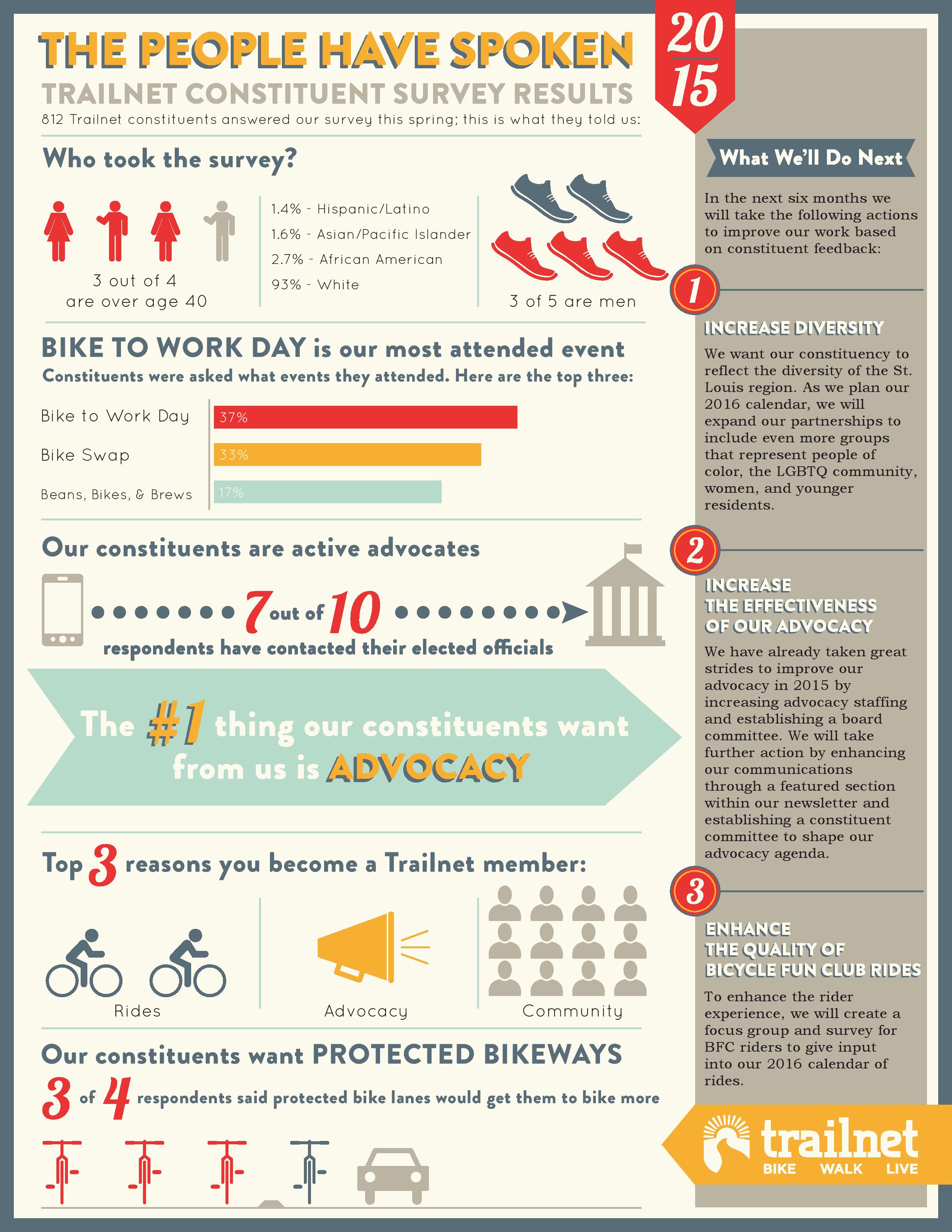 Trailnet recently released the results of its constituent survey. It provides an interesting insight into a segment of the St. Louis cycling community. The graphic itself is easy to read, but here are a few things that stood out in the survey results, and survey participants:

93.4% of respondents were white. This is in part due to Trailnet being a member organization, an optional, pay-to-belong group. The survey wasn’t limited to members (49% of respondents were members), but was promoted via the Trailnet newsletter, email, and social media channels. I’ll guess that this is an accurate representation of Trailnet membership, but know that it is not representative of the St. Louis cycling population.

A full 56% of survey respondents were over the age of 50. Just 10% were age 21-30. Trailnet’s missing the Millennials, and (shockingly for some) a whole lot of people from GenX, the Boomers, and older ride bikes. 67% of respondents were married, and 60% had children. 81% reported themselves as either “enthused and confident” or “strong and fearless” cyclists. The gender split was a closer than one might expect 57% male, 43% female response.

The Trailnet tagline reads: To lead in fostering healthy, active and vibrant communities where walking, bicycling and the use of public transit are a way of life. It’s a great vision, but clearly a wider sample of people in St. Louis who use bicycles is needed.

Smartly, Trailnet sees these challenges and proposes the following as step 1 under “What We’ll Do Next”: We want our constituency to reflect the diversity of the St. Louis region. As we plan our 2016 calendar, we will expand our partnerships to include even more groups that represent people of color, the LGBTQ community, women, and younger residents.

Next on the to-do list, it was good to see “increase the effectiveness of our advocacy”. Trailnet jumped into the South County Connector debate (no, that project isn’t yet dead-dead), and has stepped up advocacy on other fronts. 71% of survey respondents stated they have contacted an elected official. When asked how Trailnet should spend its time, the top response was advocacy.

To paint with a broad brush, and crudely summarize the landscape of the region, there hasn’t been, and isn’t, a true cycling advocacy organization in St. Louis. Trailnet may be turning a corner, but remains best known for weekend group rides for people over 50, and its one-day ride-to-work event. Great Rivers Greenway is known for its off-street rails-to-trails and greenways across the region – think Chesterfield levee trail, Grant’s Trail, and Centennial Greenway (GRG). Forest Park is a magnet for cyclists, but it plans, and largely exists as an island for fitness cyclists, and not connected in any meaningful way to a larger cycling network or infrastructure.

Advocacy is sorely needed. The City of St. Louis hiring a traffic engineer to act as a bicycle/pedestrian coordinator may be the key step to jumpstart more collaboration and effective advocacy. Despite uncoordinated planning and implementation, the city has accumulated some quality bicycle infrastructure in a surprisingly short amount of time. The GRG Midtown Loop project and riverfront road and bicycle path reconstruction represent a new phase for the organization. If Trailnet listens to its members, engages the larger community and continues its advocacy role, we may be on to something: Trailnet as advocate, GRG as planner and builder, city as enabler.

Luckily, individuals refuse to wait. Matthew Wyczalkowski started the Safe TGA site and successfully pushed for a lane reduction and added bike lanes on a heavily cycled Tower Grove Avenue. 24th Ward Alderman Scott Ogilvie play a big role in getting bike lanes on Oakland Avenue and the design of a much more bike and pedestrian friendly Skinker/Clayton intersection. And the resident led Greater Gravois Initiative is helping deliver a better plan for the Gravois Stroad.

Real progress, building a city where one isn’t required to own and pay for a car, where cycling is an option for every trip of less than two miles, eliminating the worst aspect of choke points that sever connections and make cycling difficult, and especially, understanding how to best serve the large number of residents who do not own a car, is difficult. These require advocacy, not city sustainability plans. Trailnet, GRG, the city’s parks and streets departments, and the city’s new traffic engineer together may finally get us there.

A few details on the Trailnet survey report (PDF):