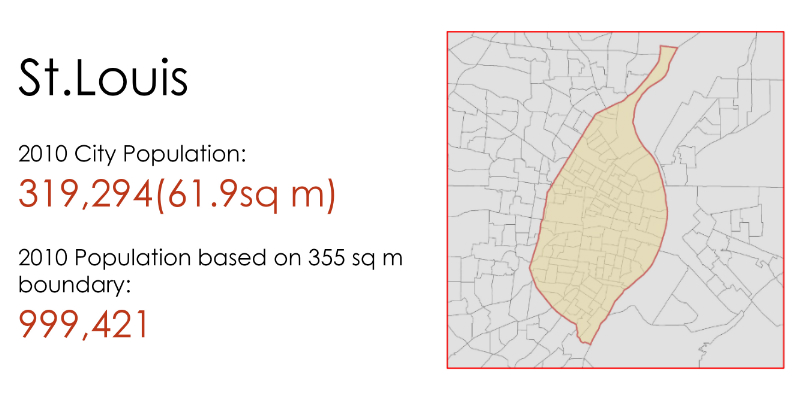 The geographic size of the City of St. Louis is important to understand. Its 66 square miles, history, and current demographics means that it regularly lands on a variety of Top 10 lists. St. Louis ranks as a Top 10 literate city (number of libraries, bookstores, publications, etc. per capita), can boast more museums than New York City (per capita), is a Top 10 city in homicides and sexually transmitted diseases (per capita). Most often, these lists are not comparing like cities. To address problems like this, Belt Magazine has made an effort to standardize the size of the American city. 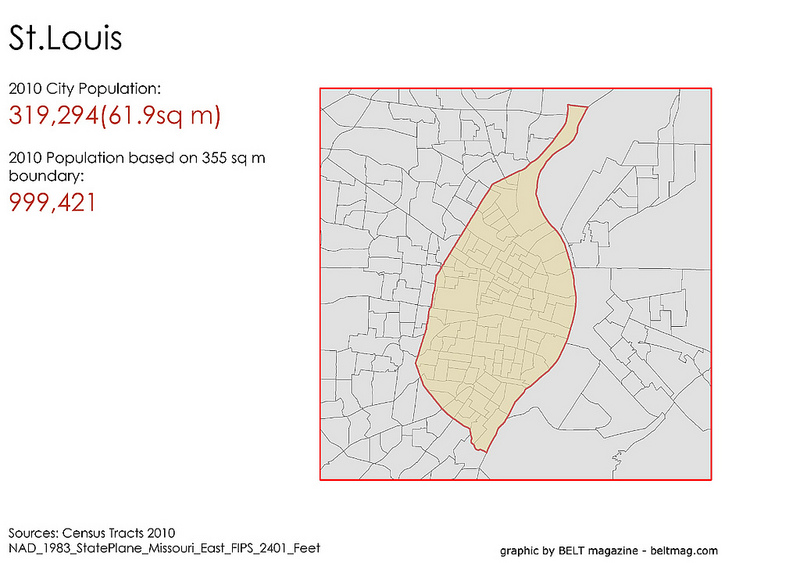 Belt is also challenging this notion: Conventional wisdom holds that the larger the population of a city, the more successful the place must be. If the population’s growing, that city must be doing something right. If it’s withering, it must be in decline.

The publication recognizes “cities are arbitrarily constructed entities with culturally loaded boundaries”, and asks, “so what would happen if every city shared the same geographic borders? Would population numbers reflect different realities? Would the perceptions of places change, defining which cities are viewed as declining or prospering?”

While noting that any alternative measure of a city is “just as capricious” as existing political boundaries, they settled on a “standard American city” of 355 sq mi by averaging the size of the ten most populous American cities.

In basic terms, the effort results in something closer to a proverbial apples-to-apples comparison. Another way to do this is to use urbanized boundaries (more or less metropolitan statistical areas) to compare cities on measures of poverty, job growth, cultural amenities, etc. This doesn’t standardize by size, but by form. Plenty of reports, and local and federal agencies do this, yet still too much value is placed on measures within specific select political boundaries. In the case of St. Louis, the result if too often to the city’s (and region’s) detriment.

Imagine St. Louis being compared to other cities with its 355 sq mi. We likely would fall on the list of “most literate” cities, but also on crime rankings, health issues, and other measures. Ignoring whether this would ultimately be good for St. Louis, it would present a more honest and relevant view of our city.

Belt’s 355 sq mi St. Louis could be better. Many cities have geographic boundaries that direct population growth in uneven patterns, and considering the larger St. Louis region, one would place the center of the 355 sq mi box on about the intersection of I-170 and I-64. That’s nitpicking a bit, but imagine Chicago’s numbers with it’s center on the lake front. Anyway, Belt’s work provides an interesting insight into an often misunderstand and abused measure of our cities. 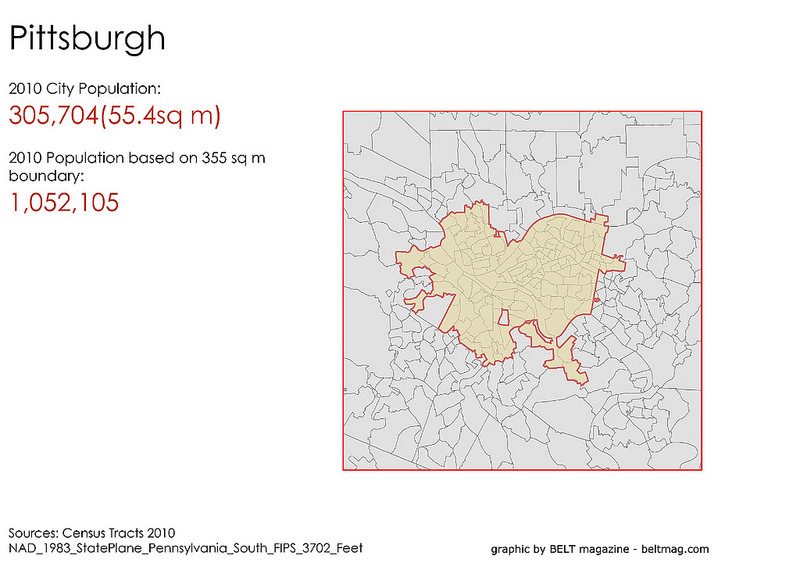 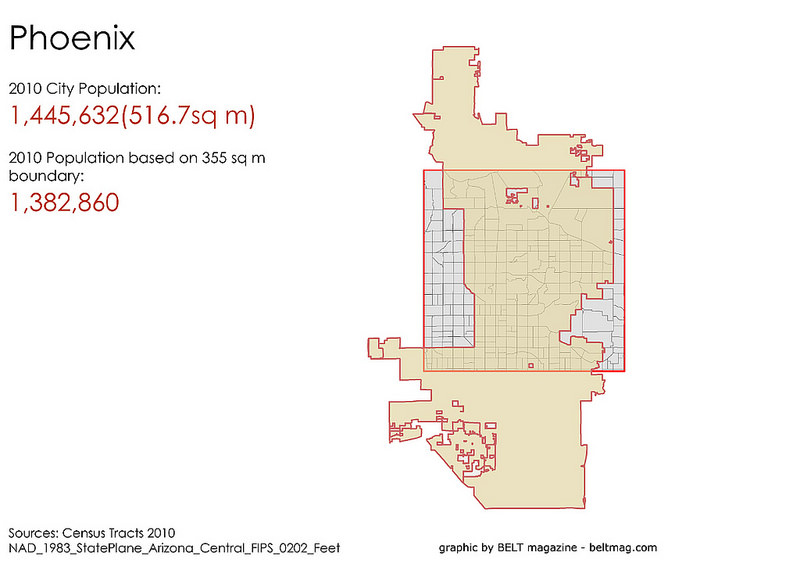 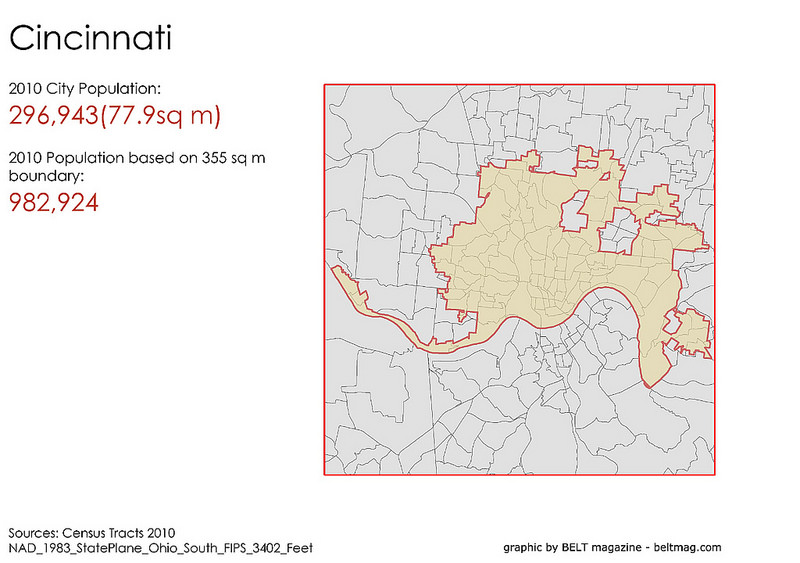 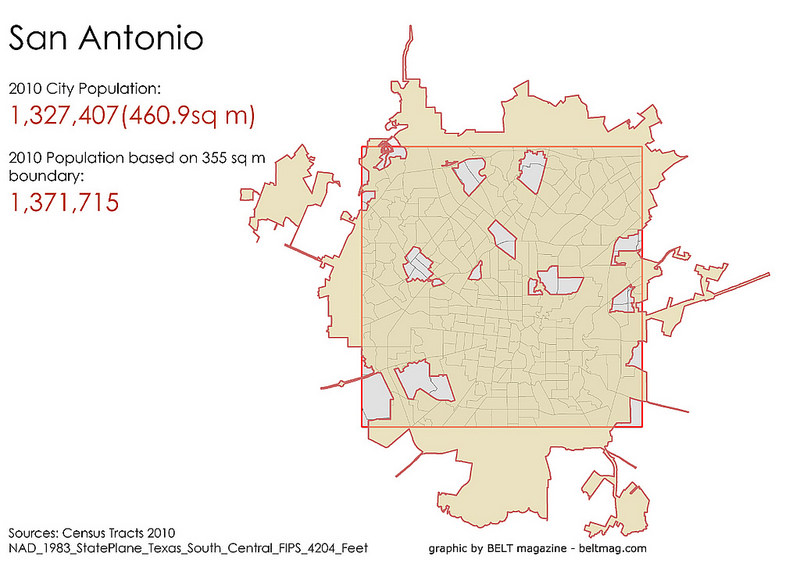 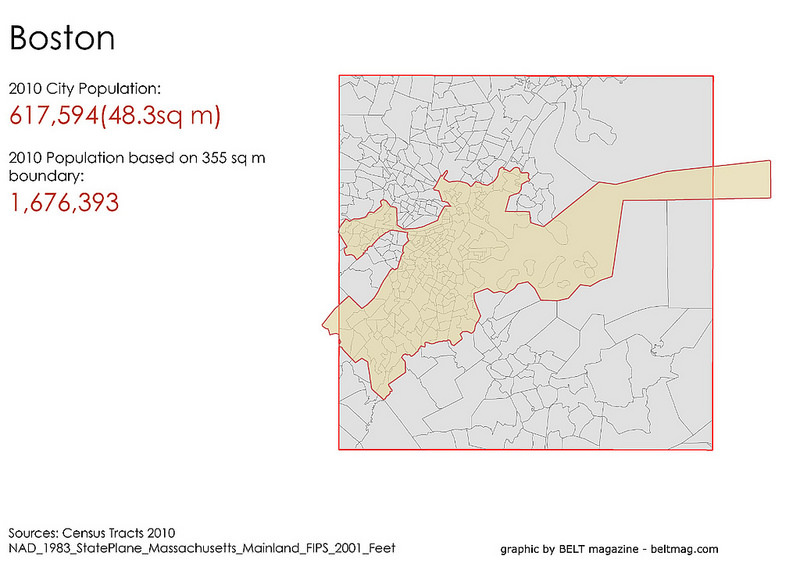