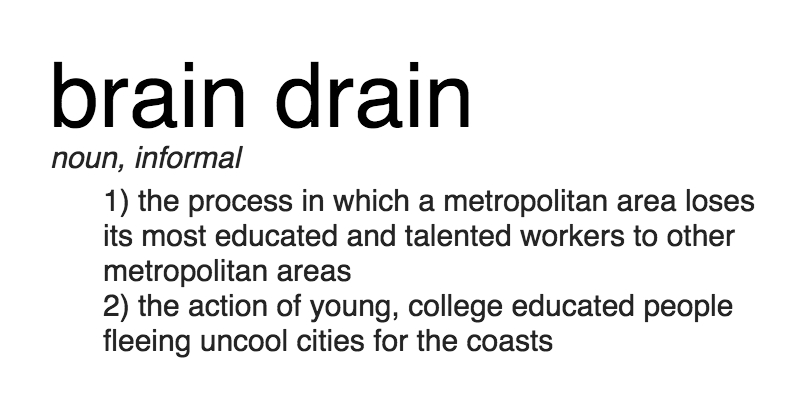 This means that beyond simply adding college educated residents, the St. Louis area outpaced the average national growth. St. Louis did add a lot of college educated residents. In 2013 there were 182,710 more people with at least a bachelor’s degree in the metro area than in 2000. That represents a 41.9% increase, and a 7.7% rise in the share of residents with a four-year degree. For 25-34-year-olds, the gain was 37,309 – a big number for even “cool” metros. Over the same time period San Francisco added 45,654. There’s plenty of good news, but still a lot to unpack with this study.

First, what is “brain drain”? At a base level it’s losing college educated residents. The idea of “brain drain” seems to have taken such a hold that some (many?) believe the raw number of residents with at least a bachelor’s degree is decreasing in some large cities. In response to “draining brains”, many places have ramped up their rhetoric, PR, and marketing efforts, and sometimes created new policy in an attempt to retain and lure a greater number of college educated, usually young, residents. 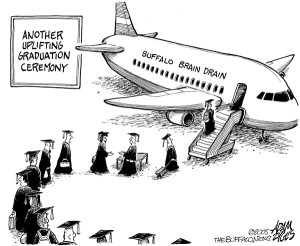 In a way, it’s easy to see how the “brain drain” phenomena can take hold. Look around your city, see all those college kids? Lots of them will move away upon graduation = brain drain! The popular notion is that a few cool costal locales are draining talent from other not-so-in-fashion cities. When your region is losing jobs and/or population, it’s perhaps even easier to imagine cool cities stealing your brains.

Americans as a whole are becoming significantly more educated. From the study: college-degree attainment among Americans aged 25–34 is 32.9 percent and for those over 65, 24.1 percent. And so it’s almost certainly accurate to say that all large American metro areas are experiencing “brain gain” instead of drain. That’s pretty simple. Hopefully not many thought that a major metro area like St. Louis was actually becoming less educated due to cool cities stealing our brains.

With that notion of brain drain plugged, what we should care about is whether or not a metro area is gaining brains at a slower rate than others. Over a decade, a region can increase by 10% the number of residents with at least a bachelor’s degree, but if other cities, or the average city is adding 20%, that region could be said to be gaining brains, but also draining them to other places.

In this study, Renn looked at 28 metro areas among the nation’s 100 largest which had lost population and/or jobs from 2000-2013. Seven had experienced both population and job loss, one (Pittsburgh) saw population decline but job growth, and the rest, including St. Louis, experienced slow population growth and job decline. The study found that all 28 of the metro areas examined are gaining residents with college degrees at a double-digit rate.

The sample size here was purposely limited to focus on America’s “shrinking cities”. What Renn found was that nearly half of the 28 shrinking cities outpaced the national brain gain average, and again, that all 28 added residents with at least a bachelor’s degree. This has resulted in the study being largely characterized by news coverage (in Pittsburgh, Buffalo, Cleveland, Chicago) reporting the raw numbers as revealing the myth of brain drain is really brain gain. As of publishing this piece, I hadn’t seen anything written in St. Louis.

What’s much more informative is to consider how a metro area is doing relative to others. This is addressed in the study as well, by a measure labeled the location quotient (LQ). The LQ measures how fast the college educated workforce grew relative to the national average (now at 29.6%). While every metro area is gaining college educated residents, a positive LQ means that the region outpaced growth in the national average.

By this measure, the study shows St. Louis doing quite well. The region’s LQ of 0.08 is the third highest measured of the 28 metros in the study, outpaced by only Pittsburgh and Grand Rapids, MI. This means that St. Louis has a greater concentration of college educated residents relative to the nation today than it did in 2000. This is certainly good news, but we should want to know more.

Looking at cities that regularly appear among the most educated in the nation, the study found Austin, Denver, Minneapolis, Seattle, and Washington D.C. with negative LQs from 2000-2013. Some of this is explained by those cities being far above the national average in 2000, and so continuing to gain college graduates at a faster rate than the rest of the nation wasn’t sustainable. However, this does show that there gap between the Denvers and St. Louis’s of the nation isn’t widening.

St. Louis measures well against 27 other “shrinking” metro area, but how does it rate against the metro areas we envy, or aspire to become? Perhaps we should consider the average growth of the top 50 metros. Of course that’s a different question than the brain gain study sought to answer.

Looking at 2010, St. Louis ranked 42nd in residents with at least a bachelor’s degree, with 29.9%. That may be a little misleading as much smaller college towns like Provo, UT and Madison, WI rank higher. This is where the East-West Gateway “Where We Stand” reports on the state of St. Louis are very useful. The latest report, just recently released, looked at the nation’s 50 largest metro areas by population (past reports looked at roughly 30 metro areas based on population, distance from St. Louis, and economic function, seeking “peer” cities).

For the latest report, showing 2013 figures, the measurement changed slightly to include the 50 largest metro areas, and comparing them to the national average of residents with at least a bachelor’s degree. This shows St. Louis at 32.5%, ranked 22nd, and nearly at the 32.7% average of the 50 largest metros. This gain is the result of St. Louis’ above average increase in percent of adults with four year college degrees. 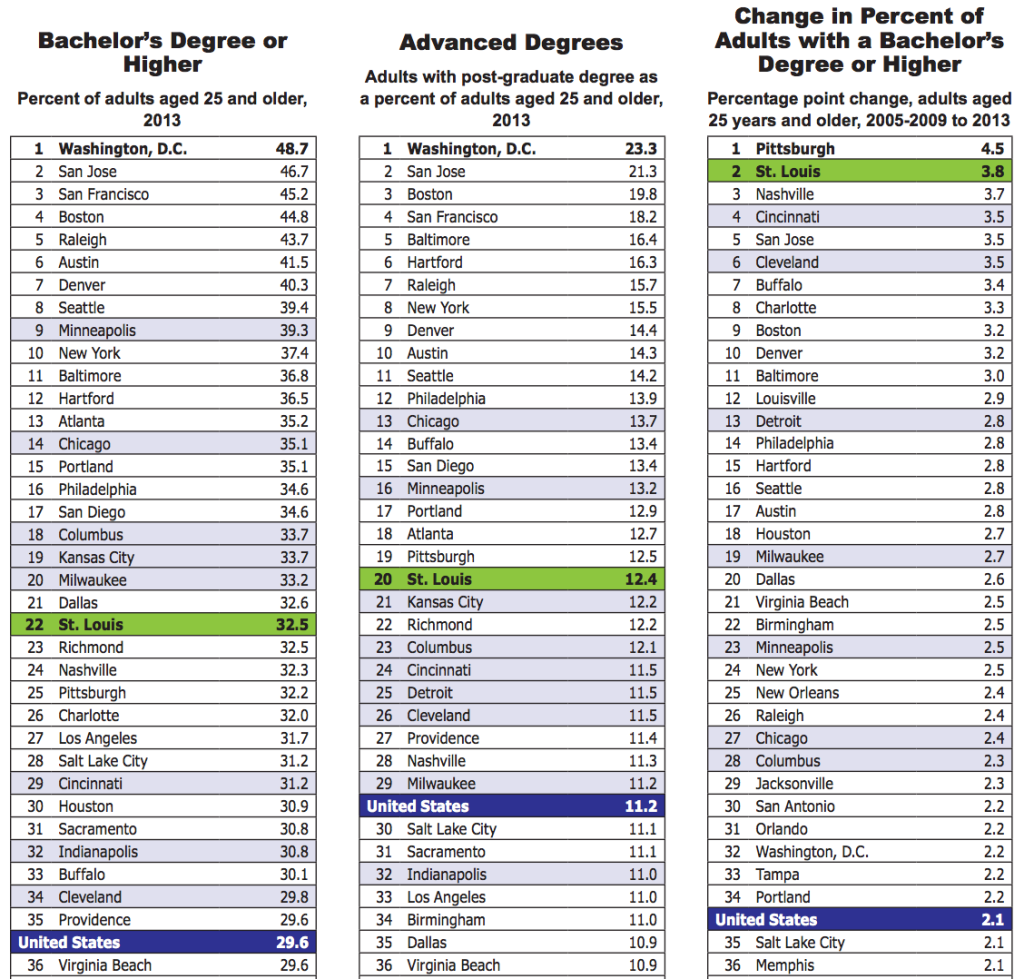 So what to make of it? We’ll look at one more measure: by how many percentage points St. Louis trails a spot in the top 10. In 1990 this was 4.1%, in 2000 the gap was 4.2%, in 2005 it was 6%, and in 2013 4.9%. This shows St. Louis making recent progress, but not big strides in catching up to the top 10 metro areas. The diverging rates of college educated residents may have slowed, and in some places reversed. Whether this trend will continue is unknown.

For St. Louisans, the revelation from all of this may be that 618,650 residents here have at least a bachelor’s degree. That’s a big number and points to an educated and quickly growing workforce. The region isn’t a backwater for talent, and isn’t experiencing anything like the simply addition or subtraction notion of “brain drain”.

The study isn’t just a statistical exercise, it makes a policy recommendation. The study’s conclusion reads in part, “these cities have largely accomplished their objective of boosting brain power and are making positive strides in terms of college-degree attainment. This brain gain is cause for celebration. The vast amount of effort and money currently dedicated to stopping or reversing brain drain should be redirected to worthier pursuits.”

A full consideration of the issue of brain drain or gain doesn’t seem to support this recommendation. If these cities have indeed been successful, why not continue with existing efforts? The need to grow an educated workforce and compete against other metros for talent isn’t going away. If St. Louis is indeed seeing real relative brain gain, shouldn’t we double-down on current efforts?

The study shows perhaps “brain drain” isn’t an existential problem that will doom uncool cities to irrelevancy (even the relative numbers aren’t falling of a cliff). Any misplaced popular notion that metro areas have a decreasing number of college educated residents has been debunked. Anyone with their finger on the panic button, or building a political platform to combat brain drain may have reason for pause.

Yet, if a region like St. Louis, near the very top of the 28 examined here is maybe eking out some gains when compared to other large metro areas, those metros nearer the national average are likely losing ground to other top 50 metros, and those losing ground relative to the national average may be in real trouble. That these places are gaining in raw numbers alone shouldn’t be cause for celebration.