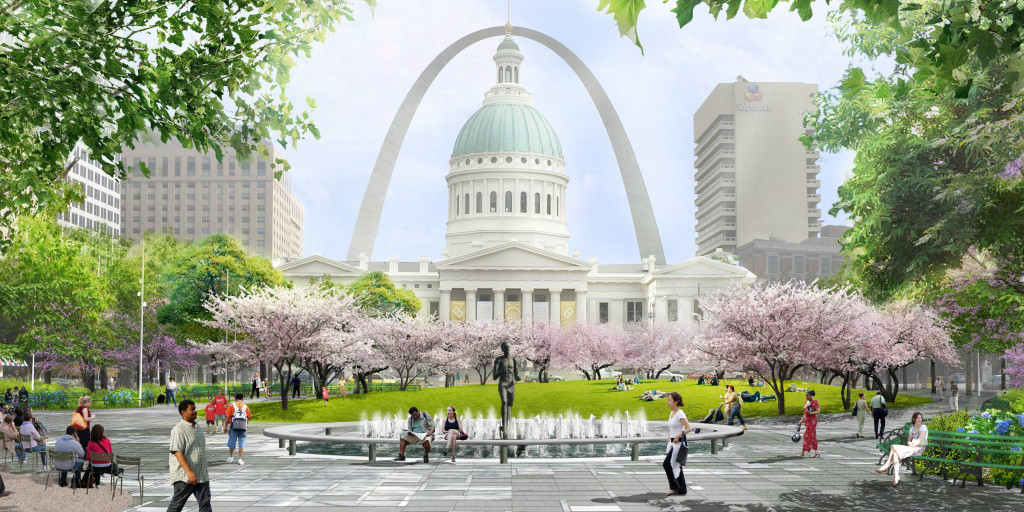 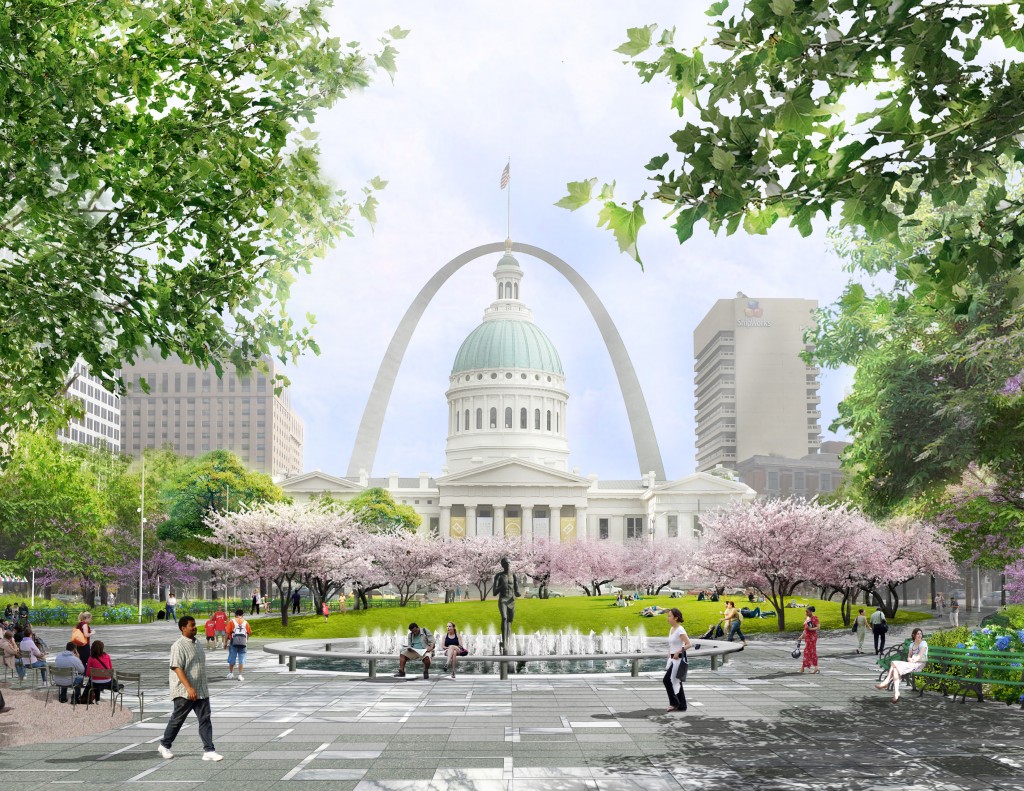 Yesterday, the city’s Preservation Review Board voted to recommend approval of the final design for a new $20M Kiener Plaza as part of the CityArchRiver effort to remake the Arch grounds area. Initially planned to be completed by October 2015, construction is now set to begin later this year and finish in 2017.

Although a city park, and not part of the Jefferson National Expansion Memorial like the adjacent Old Courthouse and Luther Ely Smith Square, Kiener has been included in the scope of the CityArchRiver project from the beginning. An agreement with the city to redesign Kiener required public meetings and review by the Preservation Board. 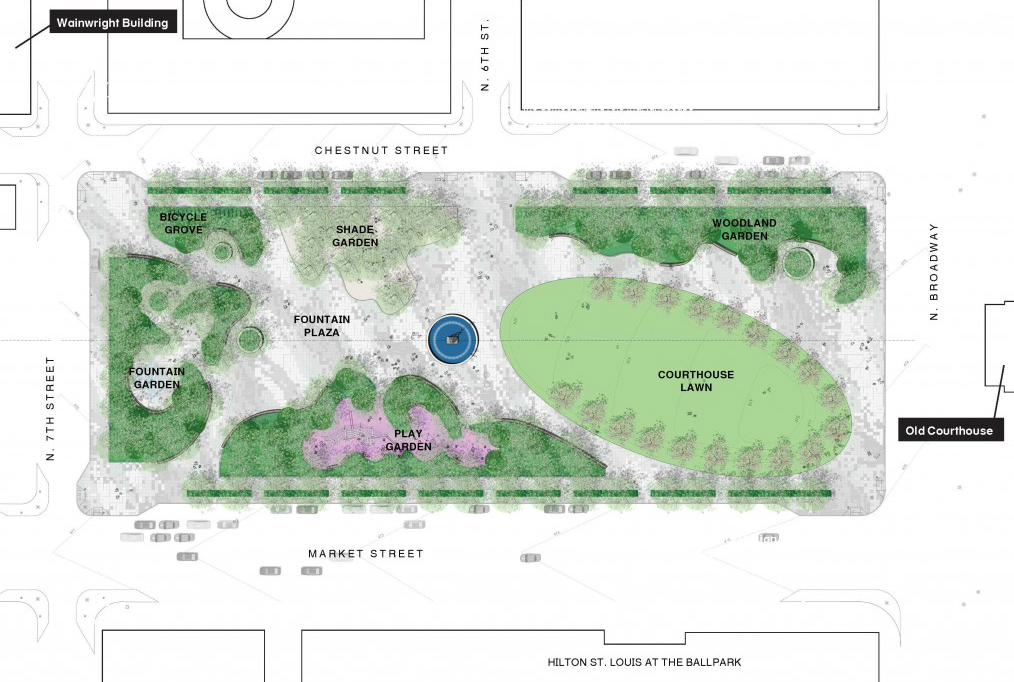 {the revised MVVA plan retains The Runner and central fountain} 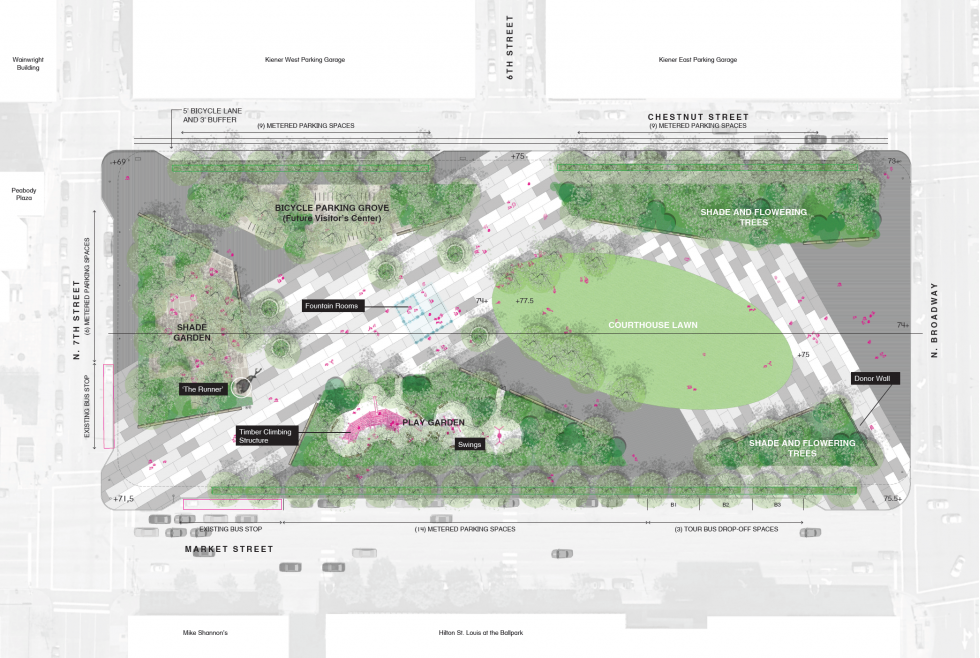 The plaza, a 1.9-acre city park, was dedicated in 1962, a product of urban renewal which demolished blocks of buildings to create the Gateway Mall, a series of parks stretching 15 blocks from the Arch to Union Station. The current design, organized around an amphitheater, waterfall, and “The Runner” fountain, dates to the 1980s.

There’s some recognition in St. Louis that Kiener could be refreshed, and it’s been the site for some great public events including sports rallies, concerts, and is a popular stop for wedding photos, family fun, and just hanging out. Beyond this activity, the park has suffered from a lack of regular programing and maintenance, resulting in thin daily crowds. 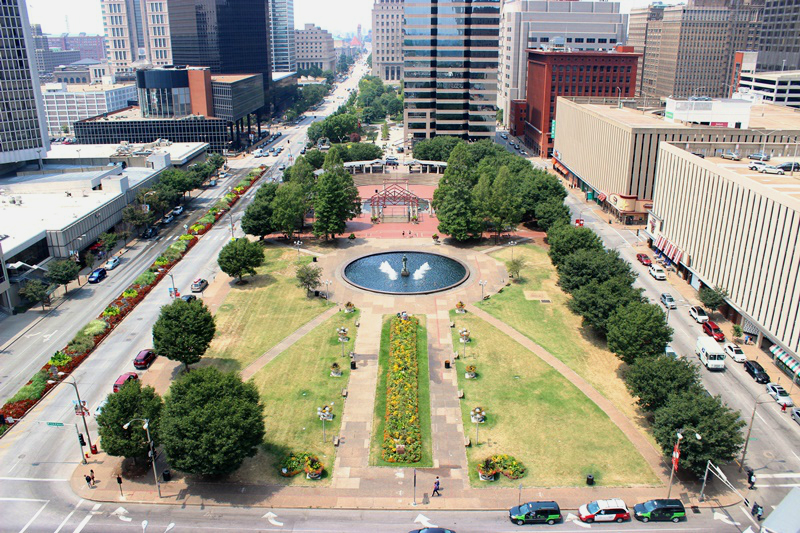 {Kiener Plaza and May Amphitheater as it appears today}

The amphitheater’s cascading fountain attracts the most activity and interaction. Reminiscent of Angela Danadjieva’s celebrated Keller Fountain Park in Portland (a designer at Lawrence Halprin & Associates) (and Halprin’s Freeway Park and Lovejoy Fountain Park), the water feature has remained contemporary and wouldn’t be out of place if proposed today. In fact, the waterfall and stepping stones at City Garden, two blocks to the west, often attract the biggest crowds at that park.

Design charrettes have produced numerous, and widely varied visions for Kiener Plaza over the past decade. Some leave the plaza’s form mostly in place, others start over. Unfortunately, no serious effort that we’re aware of imagined repurposing or updating the existing configuration. Every public space falls out of favor with subsequent generations. If a space survives long enough, or is heavily enough used, it may have a chance to remain. If not, it is completely remade. Two of the many imagined designs: 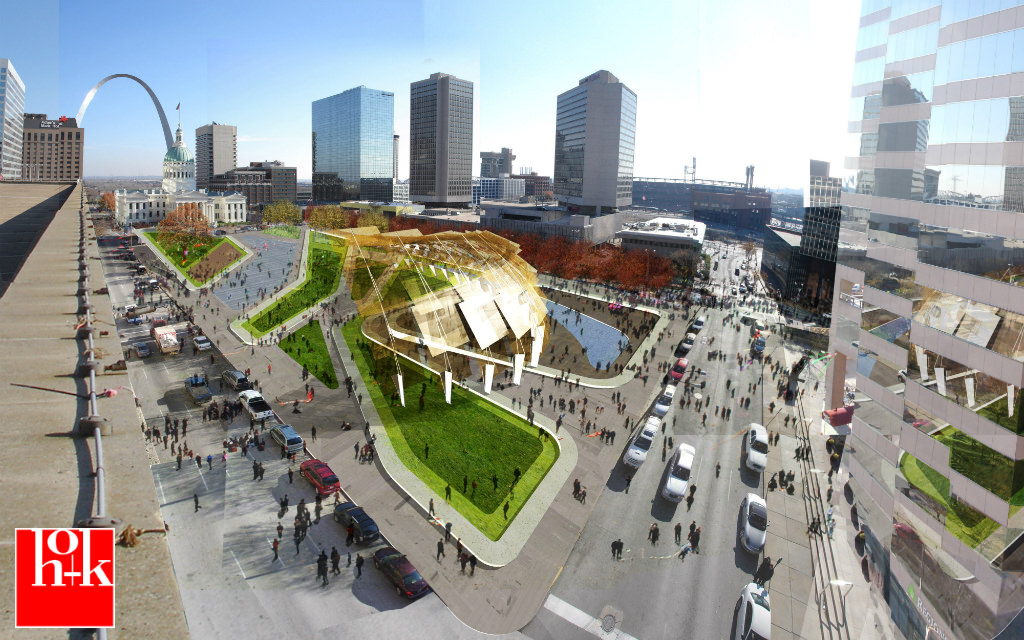 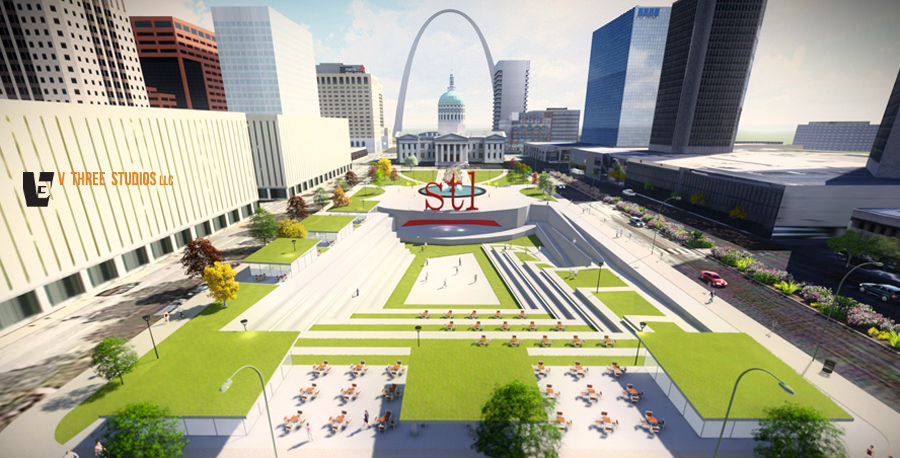 The bet now is that a complete remake and rededication to programming will better activate the space, the same logic being used for the larger CityArchRiver project. Planned is space for concerts, rallies, markets, a civic lawn, children’s play area, and shaded areas to sit. The park itself will grow from 3.05 to 3.67 acres according to CityArchRiver, largely by expanding slightly to the south. Plans call for more than 150 shade trees to replace the 66 sparsely planted ones currently in place. 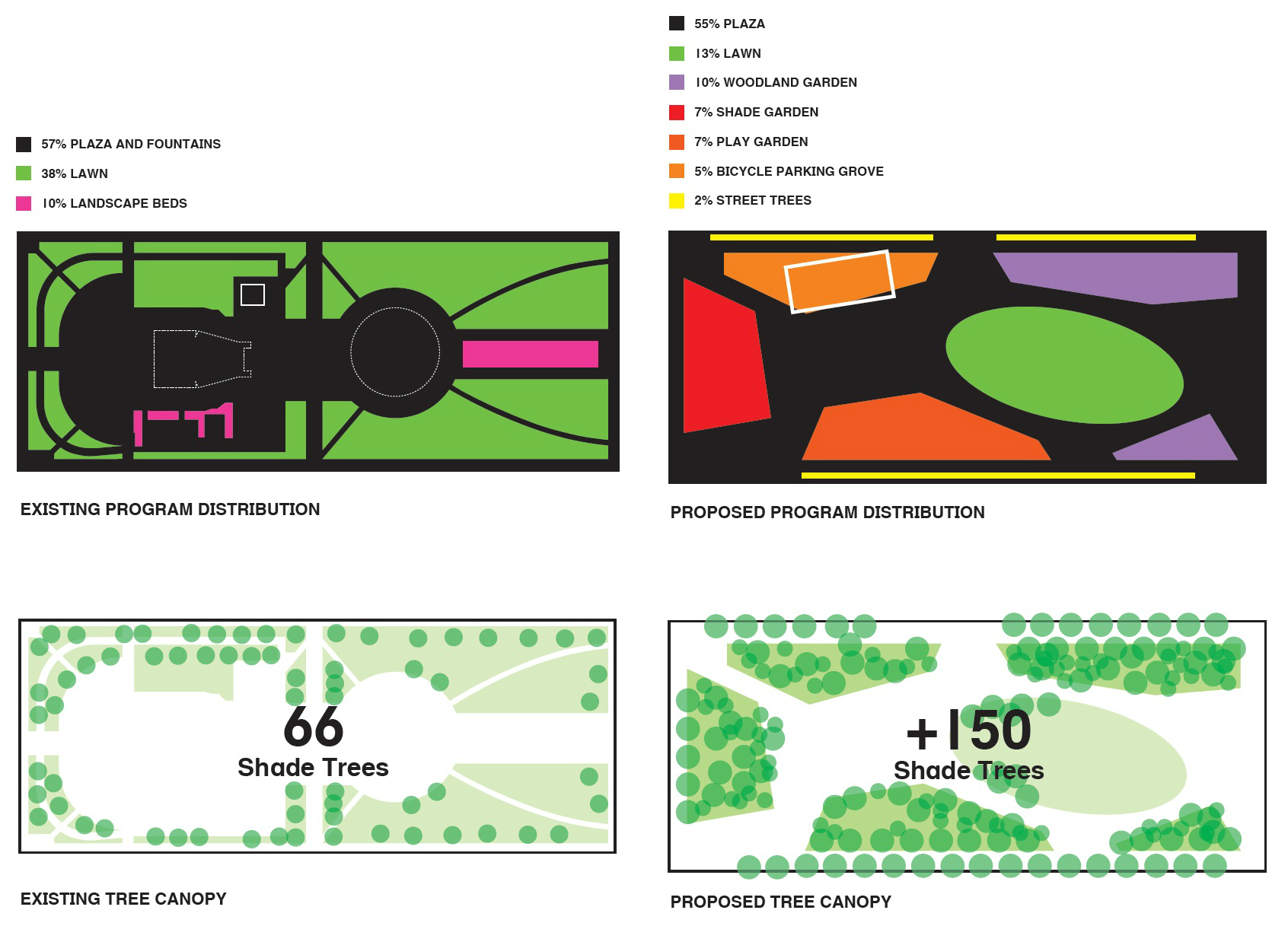 The design raises the sunken amphitheater to street level with a central open plaza ringed with nodes of activity and a slightly askew and raised civic lawn at the eastern end. A shade garden, bicycle parking grove, woodland garden, fountain garden, and play garden line the park’s edge. The design has changed little since being released late last year. The one notable difference is The Runner statue and fountain now remain, occupying a central space in the plaza. The statue had been considered for relocation.

The MVVA plan is also meant to better reveal one of the nation’s architectural treasures, the Wainwright Building. Designed by Louis Sullivan and built in 1891, the building is regrettably obscured by the Gateway One building. The open design of the plaza will make its southeast corner much more prominent. The wide walking corridor built as part of City Garden will be continued along Kiener’s south edge. 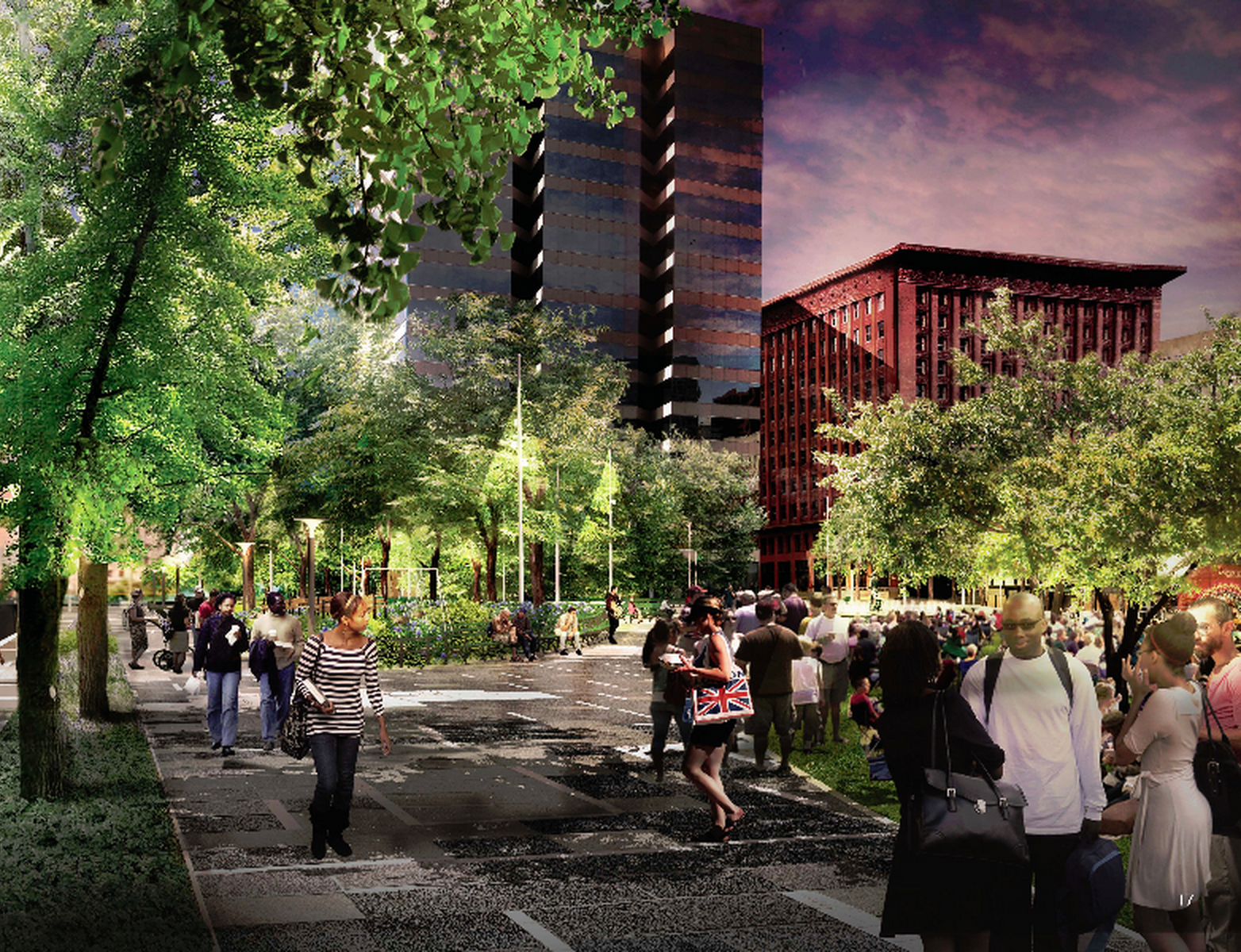 Separate from its design, Kiener Plaza has suffered from its surroundings. Market Street is overly wide along the park and the Ballpark Hilton hotel adds nothing of interest to the streetscape. Gateway One to the west with its cold facade and raised plaza doesn’t help either. Even the stately Old Courthouse hasn’t been great as it hasn’t served as the attraction it could be (that’s set to change with CityArchRiver renovations planned to expand functional exhibition space and recenter the Old Courthouse as a central part of the Jefferson National Expansion Memorial experience).

But the worst neighbor to the plaza by far has been the hulking, looming Kiener East and West parking garages. At some point the garages were probably considered modern and streamlined, great examples of downtown “renewal”. They’re also hideous, but changes may be coming. 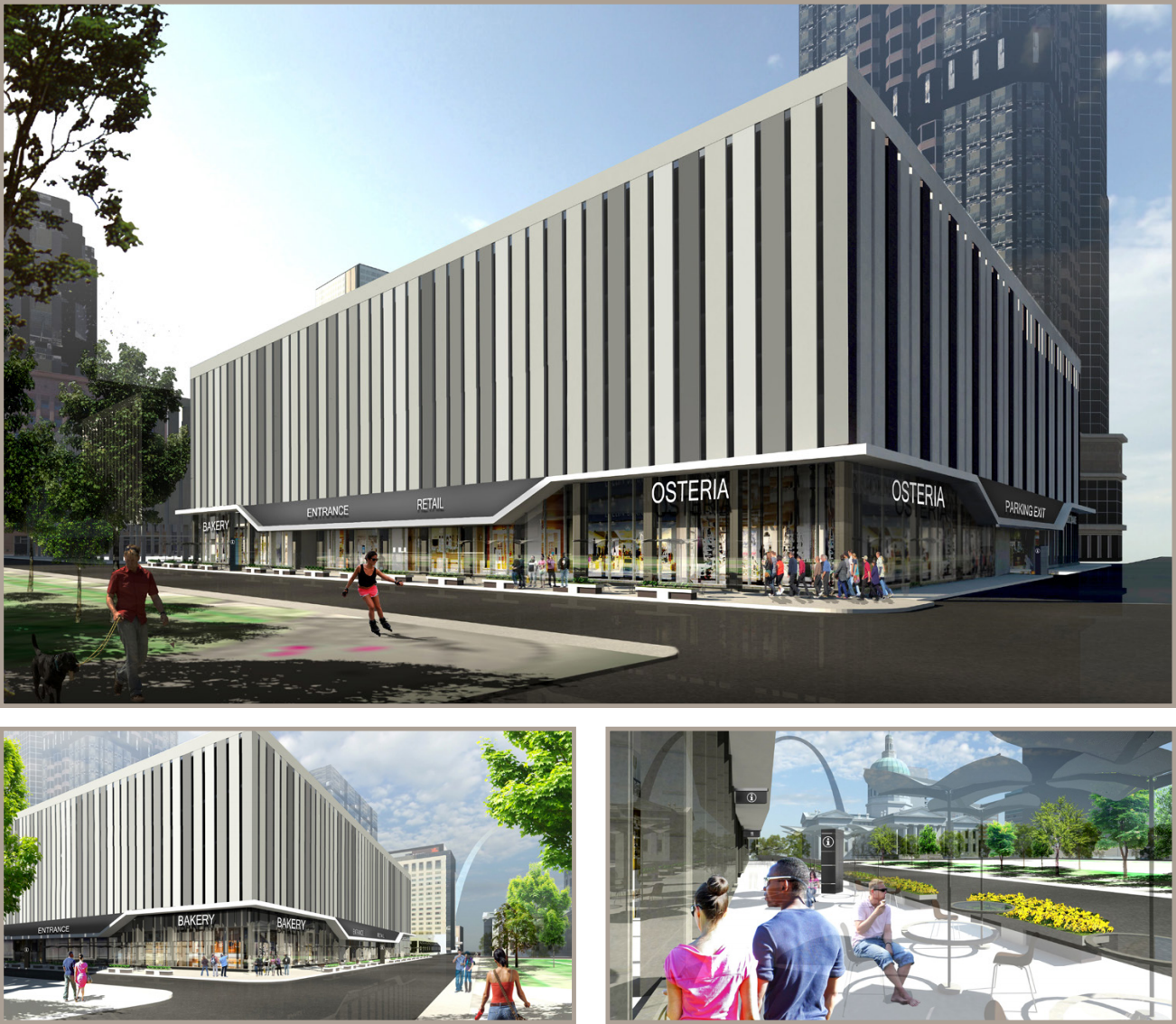 The CityArchRiver plan was always conceived as a way to catalyze development on adjacent parcels. This hasn’t happened yet, but proposals are being floated for The Landing, as well as a few adjacent areas. Pace Properties is now marketing Kiener Plaza East for new retail development. The garage would stay, but the retail facade would be raised and the concrete structure painted. Enhancement of the street level experience could have a big impact. With the removal of the Arch garage, Kiener East is now the nearest public garage to the Arch and Old Courthouse.

Kiener Plaza was named in honor of Harry J. Kiener, who was born in St. Louis on February 27, 1881. A multi-sport athlete, he is most noted for being a member of the U.S. track team at the 1904 Olympics in St. Louis. The park is highlighted by the May Amphitheater by Team Four Design (1987) and “The Runner” sculpture. The Runner is a work from Lithuanian-born immigrant William Zorach. The amphitheater takes its name from Morton D. May (1914-1983), a local art collector and heir to May Department stores (Famous-Barr).

A visual history of Kiener Plaza: 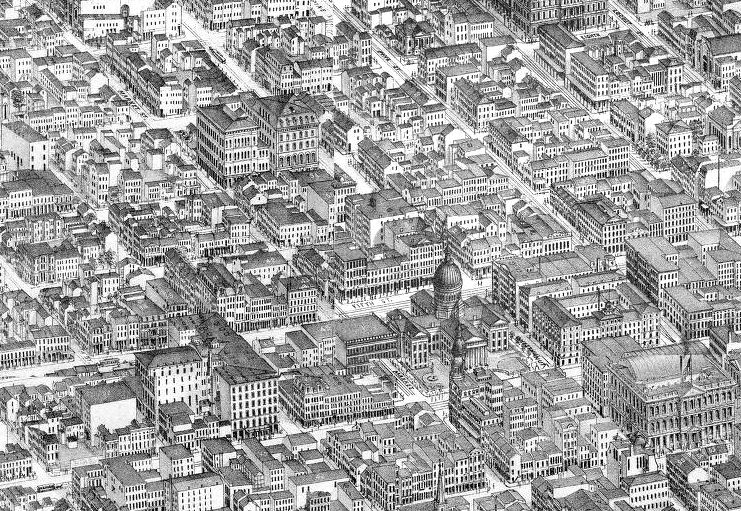 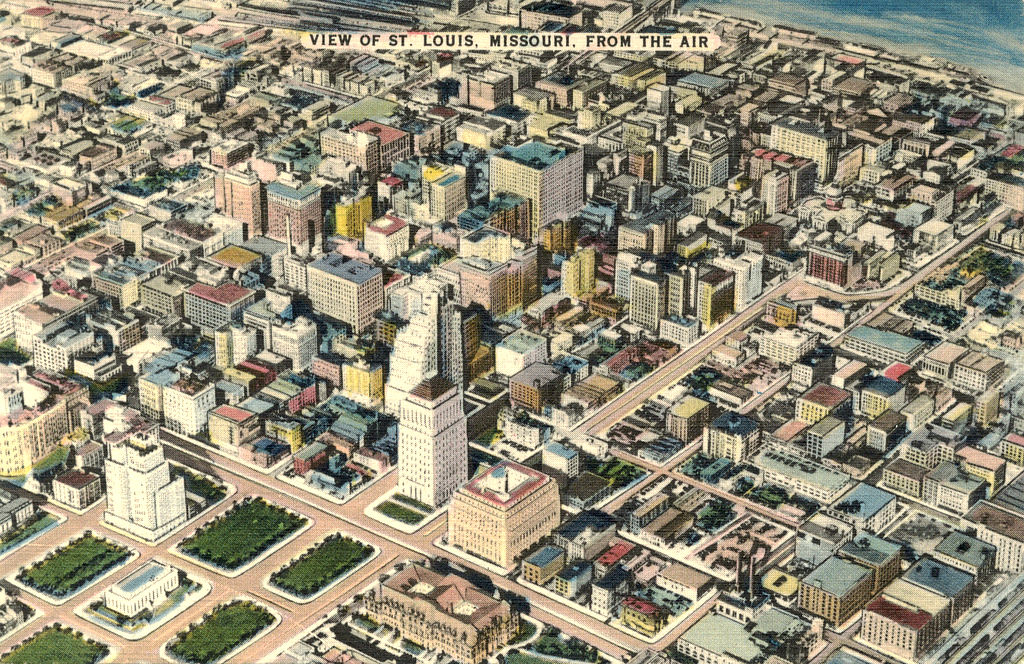 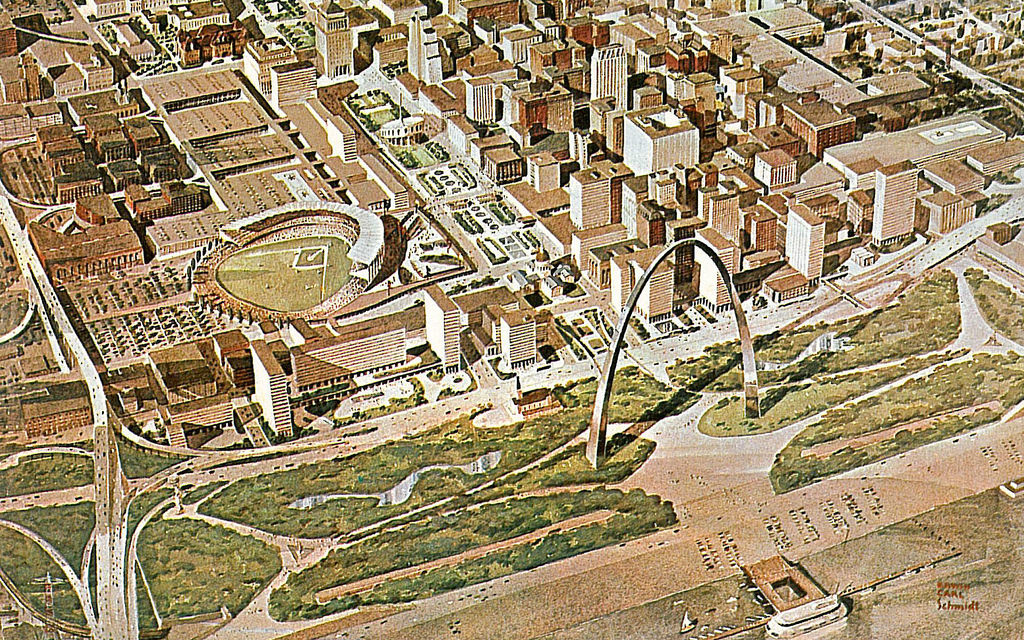 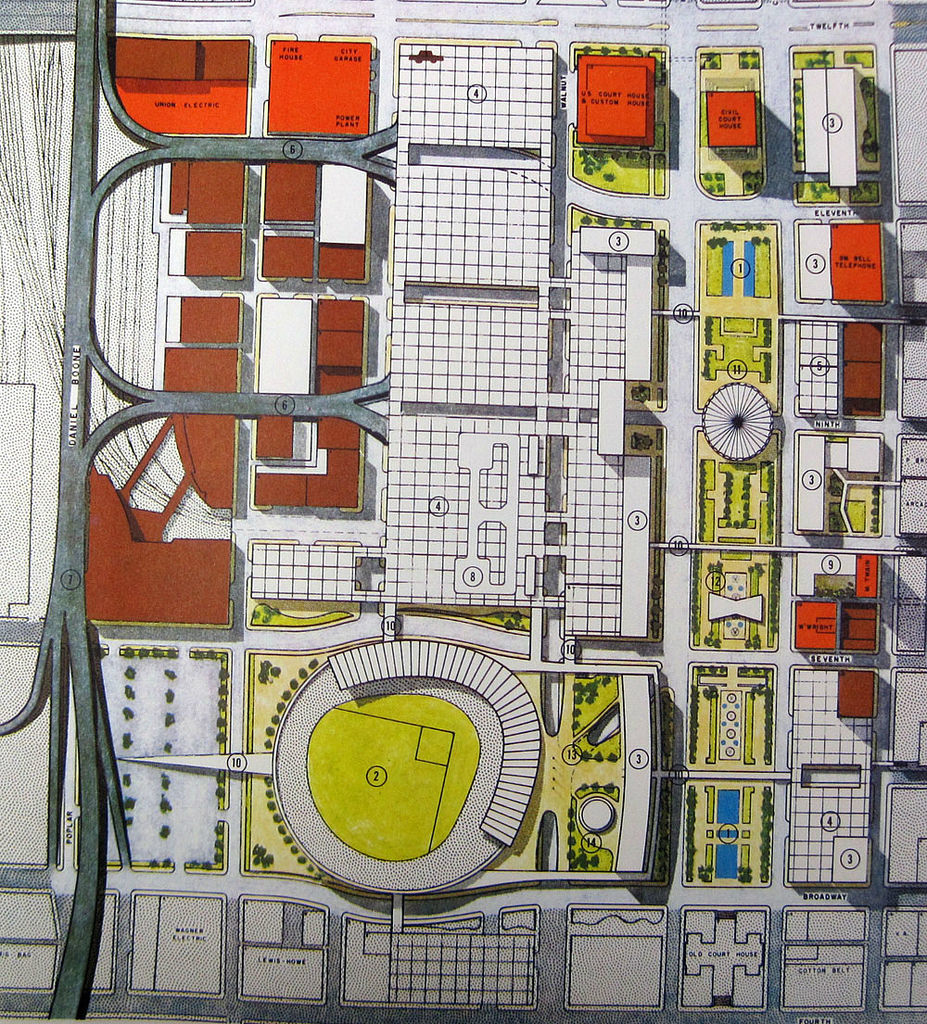 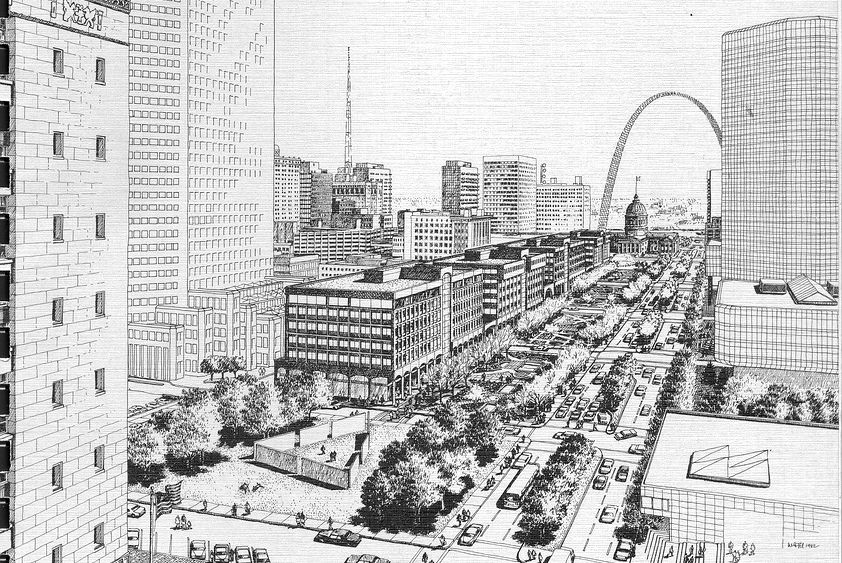