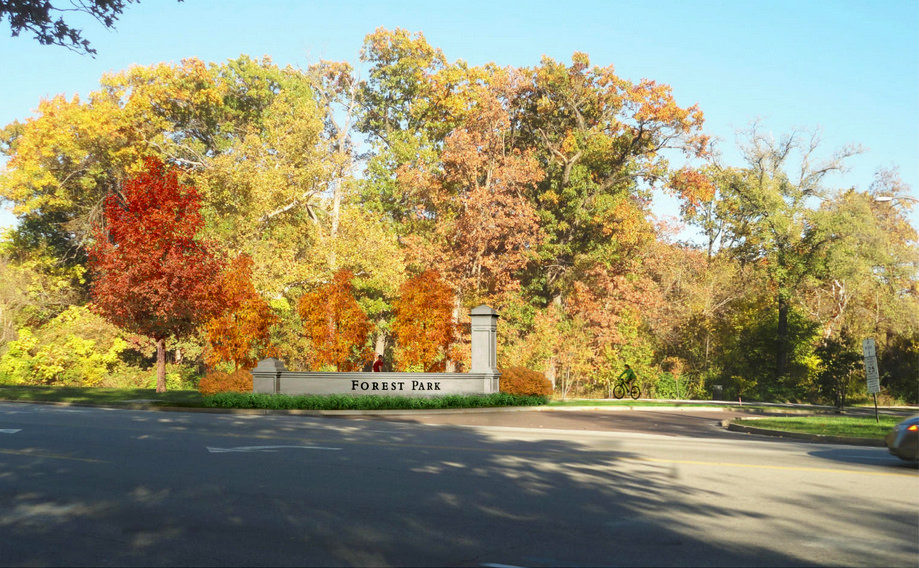 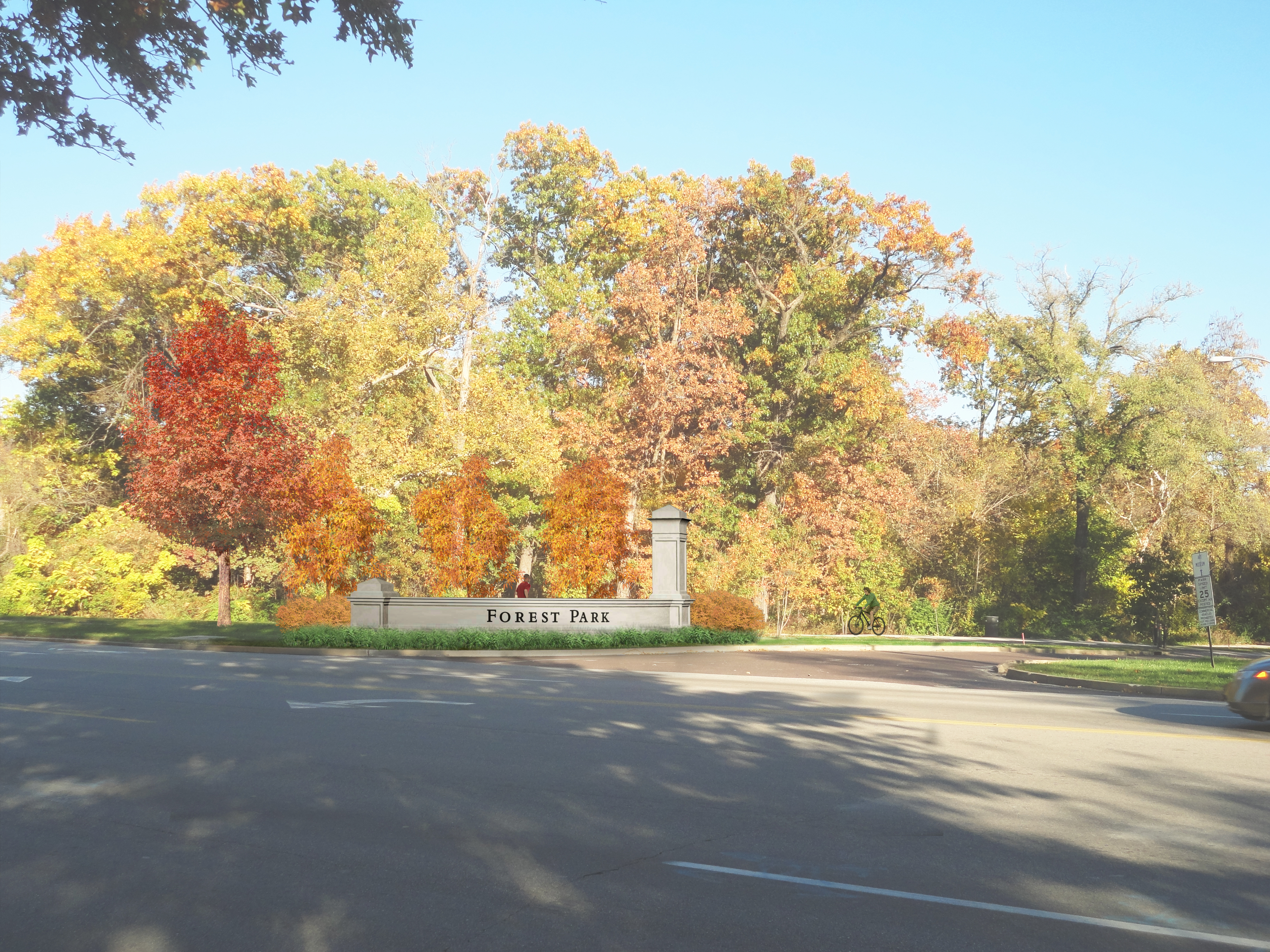 Standing at Lindell and Kingshighway, there’s little to reaffirm a visitor that the wonders of Forest Park begins on the other side of the street. The boundary of the park fails to imprint a mental image. Yet it should, and it must if it is to fulfill its essential role of creating a place, and communicating what lies beyond.

Now, Forest Park is set to install gates at eight entrances around the perimeter of the park. The plan by SWT Design may be perfect for the ho-hum consensus building, offend no one design aesthetic of much of St. Louis, but it fails to inspire. Any project is only as good as the client, and here the city’s marquee park is set to get…well, get something done, at least.

The limestone markers, designed to vary a bit at each entry point, will help delineate the park borders. This is clearly a need and has been on the wish list of the park’s master plan for decades. But the new plan is best described by Robert Duffy of St. Louis Public Radio as “modest, respectful and unpretentious”. In that item, it oddly reads as a compliment. It shouldn’t be.

In 2001, Forest Park Forever shot down a plan by noted architect Lawrence Halprin, which would have been paid for by the Gateway Foundation. Halprin is best known for his firm’s remarkable series of fountains and squares in Portland, OR, and the Franklin Delano Roosevelt Memorial in Washington, D.C. Not everyone loved his “Gates of Eden” plan for Forest Park entries, to be sure, but the gates were true landmarks by a giant of the profession, attractions themselves. The new modest, respectful, and unpretentious plan? Not so much. 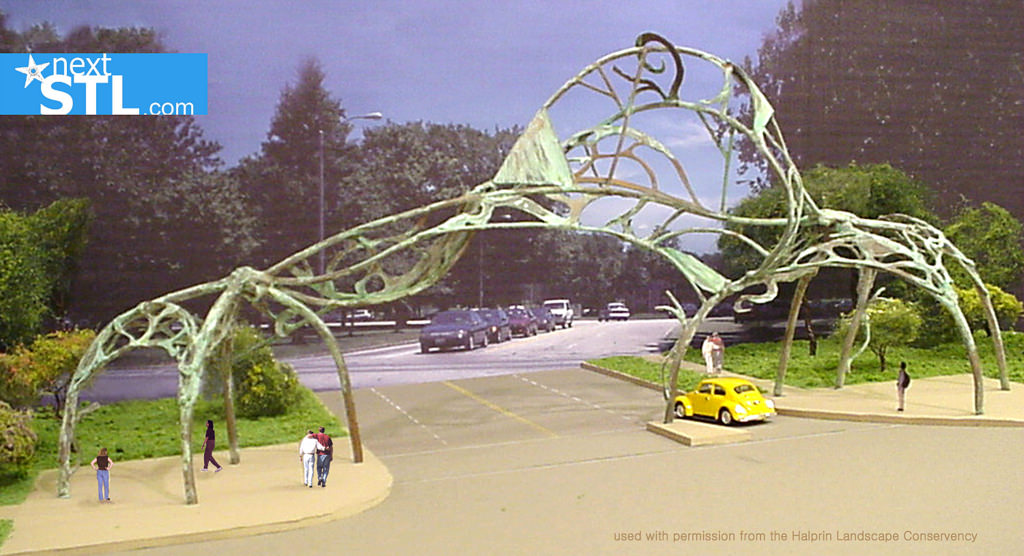 One critique at the time of the Halprin proposal was a recognition that Forest Park was conceived as an informal rural woodland expanse at the edge of the city. It’s wondering paths and expansive prairies and natural waterways expressly rejected the formal order of Victorian era parks such as Tower Grove and Lafayette Square in St. Louis. The 1904 World’s Fair brought a more formal design to a large portion of the park, but that remnant has been constrained to the Grand Basin. Unfortunately, limestone walls and columns will bring formality to the entrances that the park has avoided it for 141 years.

One excellent measure of our public spaces is the concept of “The First 100 Feet”. The Michael Van Valkenburgh led design team that won the competition to redesign the landscape at the Arch (Jefferson National Expansion Memorial), explained it well in its submission for that work.

In short, successful urban parks have “thick” edges. The MVVA submission read, “It is the experience of these first 100 feet that determines whether or not a visitor will want to venture further into the interior. A deep, penetrable, highly trafficked edge that serves as a physical and programmatic gradient between city and park is perhaps the most surefire guarantor of a park’s success.” 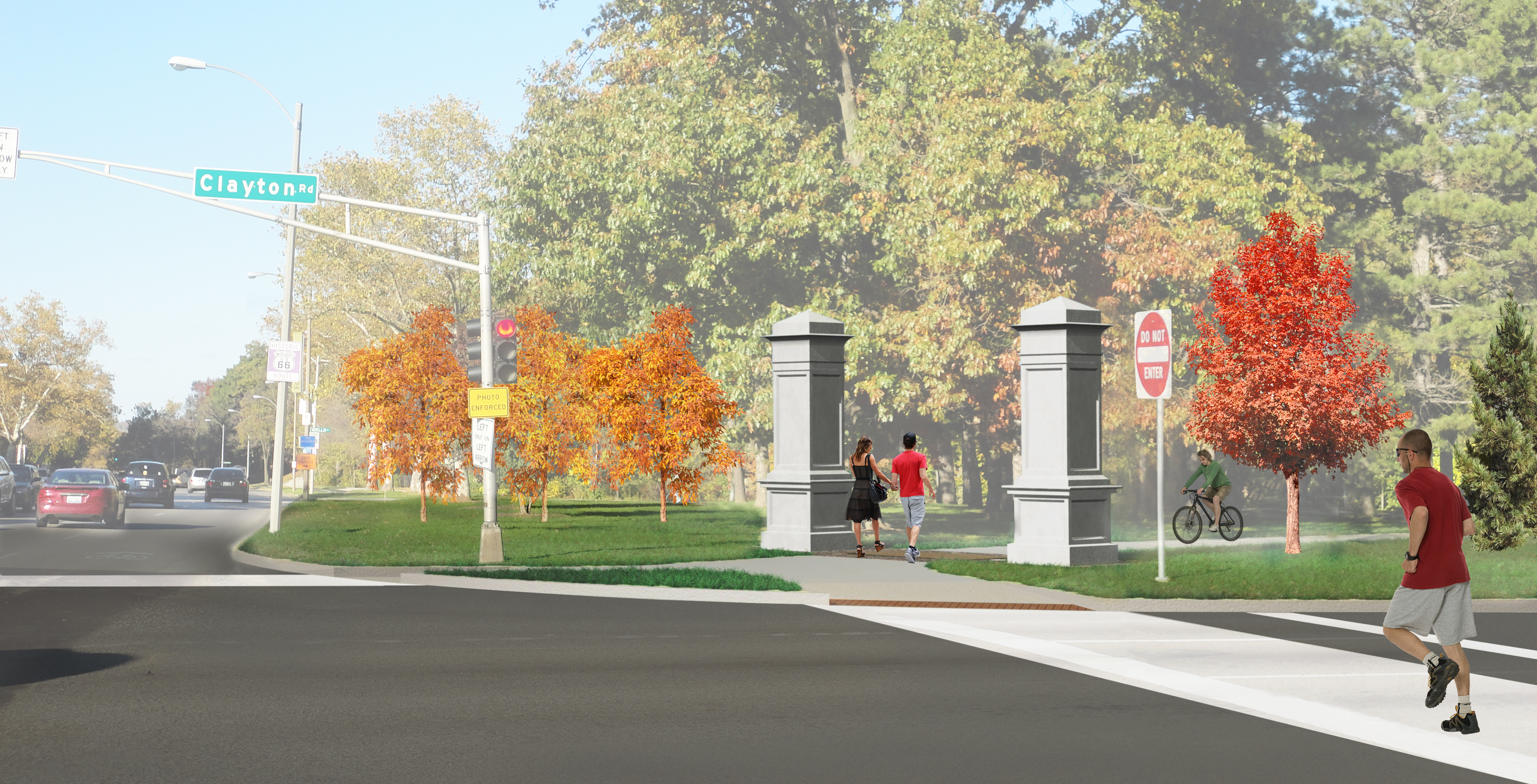 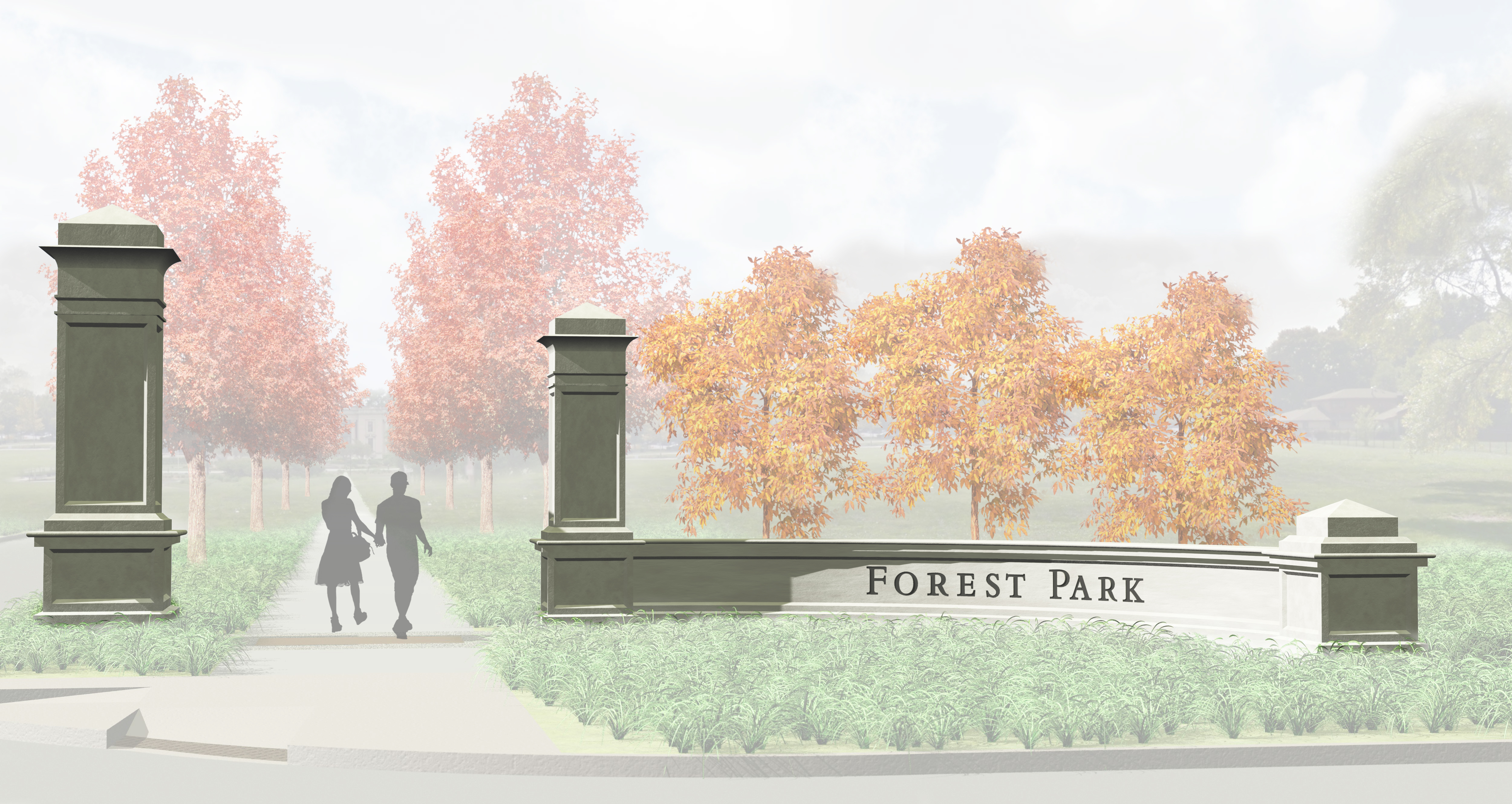 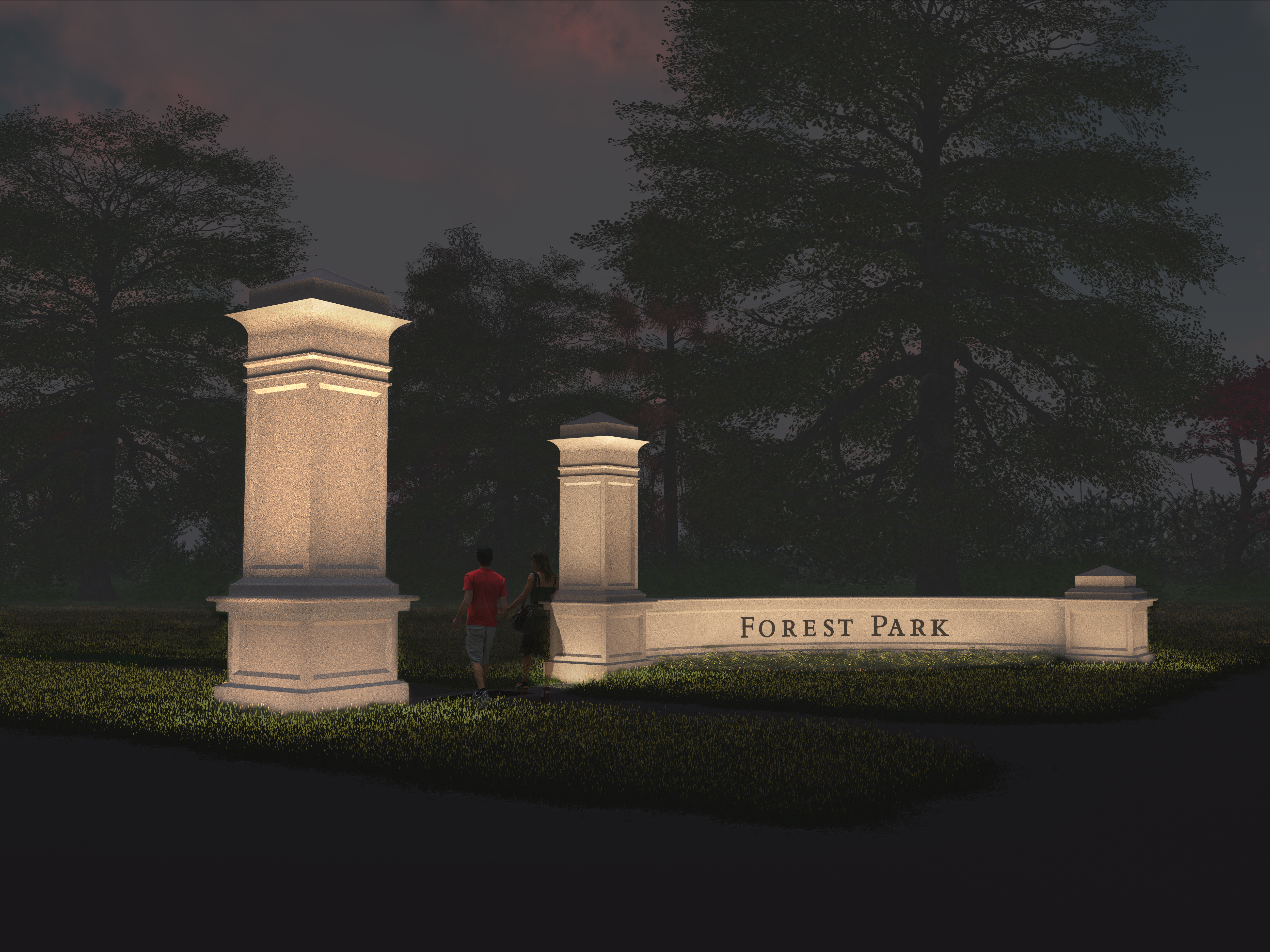 Short of bigger changes at the park’s edges (one notable exception is the History Museum’s programming), this measure would be difficult to ace. However, gates as attractors and not just markers would be a great start. Today, some park entrances are more appealing than others, yet none announce that you are entering a special place, a park of amazing attractions and beauty that serves as the heart of the region’s history and culture.

Halprin very likely said it best in a Riverfront Times interview in 2001: “There was no fine definition of the place… Most of the wonderful places I’ve been were demarcated by an entrance… (T)hey were usually places where you had a very strong sense of going from the outside world, or the ‘other world,’ if you want to call it that, into this wonderful place that you’re making.” Unfortunately the new gates skip the wonder and will instead blandly say, “yep, there’s a park here,” in a “modest, respectful and unpretentious” way. 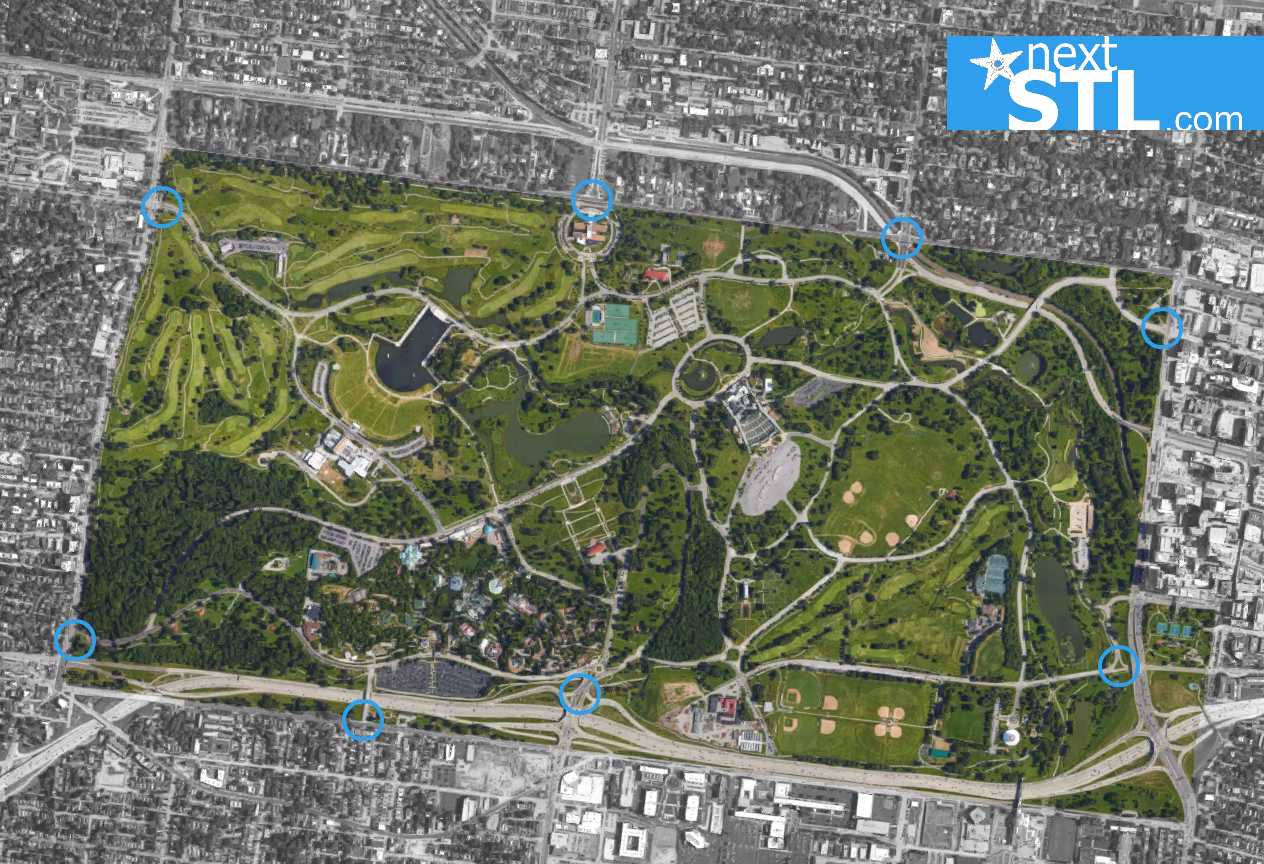 The eight limestone gates now planned would be erected at: Skinker Boulevard/Wells Drive/I-64, Skinker/Forsyth Boulevard, DeBaliviere Avenue/Lindell Boulevard, Union Boulevard/Lindell, West Pine Boulevard/ Kingshighway Boulevard/Lindell, Hampton Avenue/I-64, Kinghighway/Clayton Avenue, and Tamm Avenue and Oakland Avenue. According to St. Louis Public Radio, the first gate erected will be near the Skinker/Wells Drive entrance, which is undergoing a pedestrian and bicycle friendly remake. The estimated cost for the gate is $300,000.

As with the lid over the I-70 depressed lanes, we’re burdened by a decade plus old idea that didn’t come to be. Now we’re doing it, but in a watered down, I mean, modest, respectful and unpretentious manner. 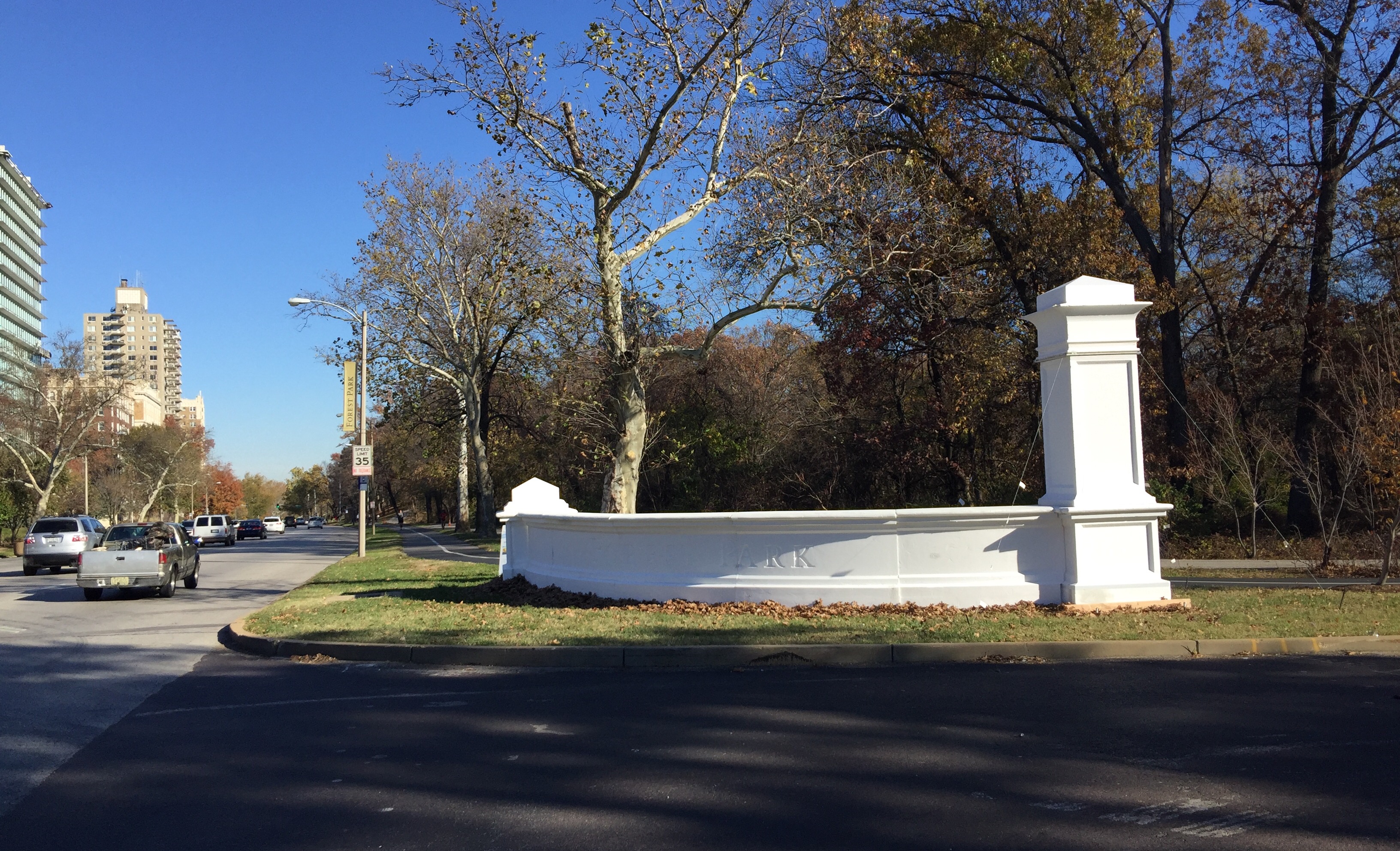 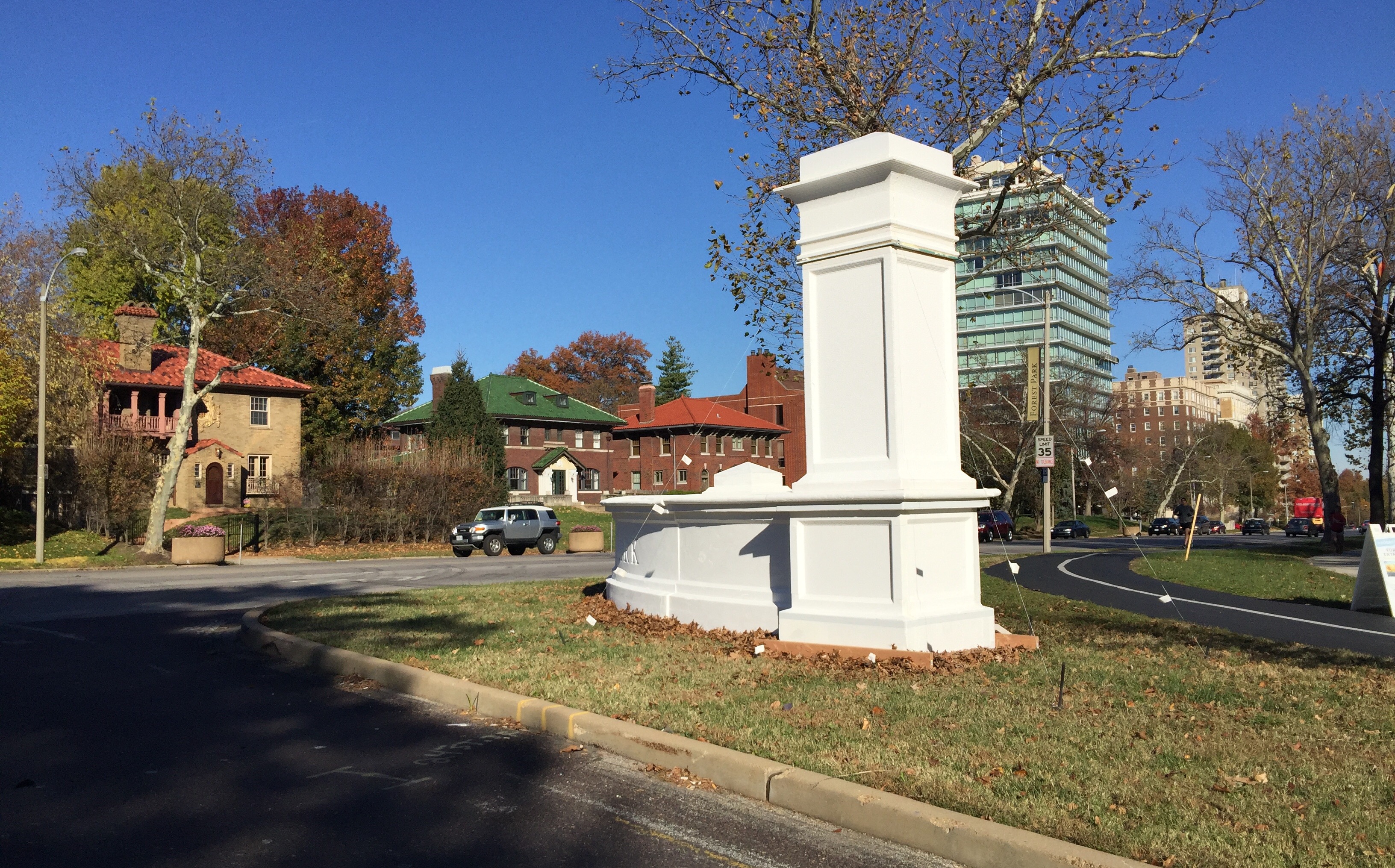