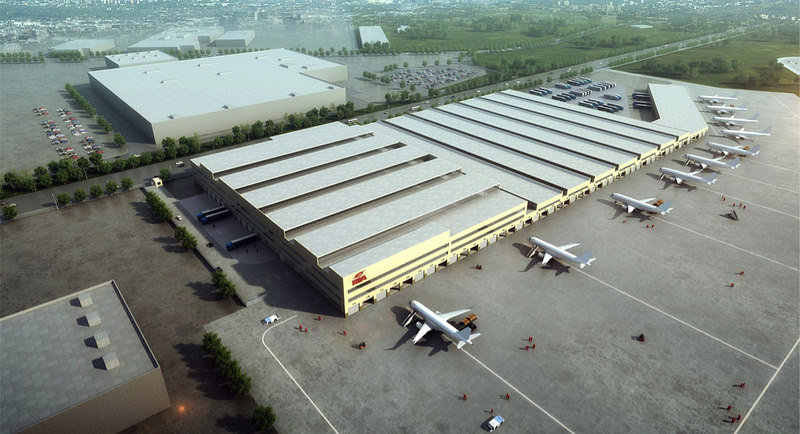 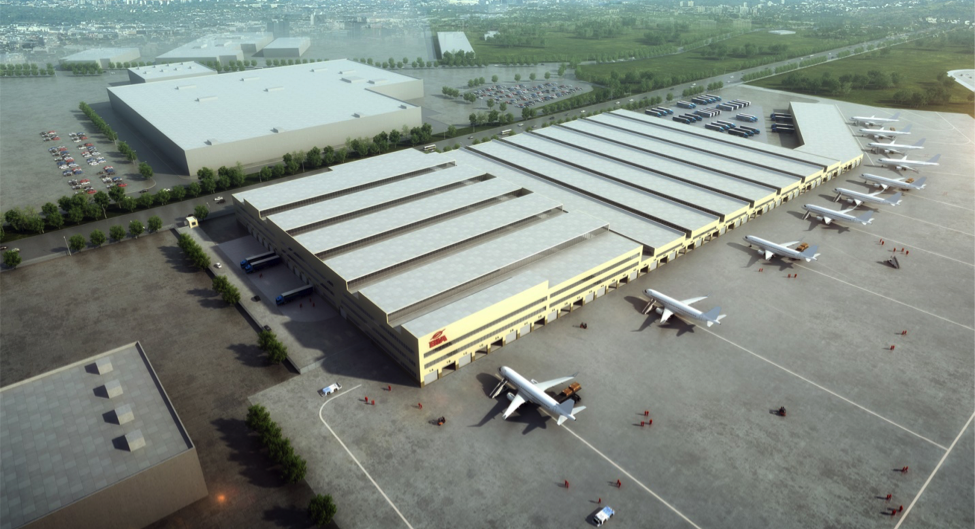 A new terminal is set to be built at Lambert-St. Louis International Airport, a major new development focused exclusively upon cargo operations. This will be the first full cargo center at the airport, and will be focused on international trade. Its development is being furthered with a specific focus of furthering commerce with Mexico and expanding markets into Central and South America. When the new cargo terminal is operational, it will help fulfill Lambert Airport’s potential as a hub for domestic & international air cargo, and has the potential to lead the way to better passenger service as well.

The impetus for the new cargo terminal is a company named Bi-National Gateway Terminal, LLC and its President, Ricardo Nicolopulos. Lambert first caught the attention of the company’s leadership for being an opportune site to bring shipments into the geographic center of the country; the airport’s excess capacity, plus the regional catchment area, made Lambert a favorable site for new cargo operations. Bi-National’s original plans were to operate out of Brownsville, TX under the moniker Brownsville International Air Cargo, Inc. Plans were later changed to focus on St. Louis and the greater capacities inherent at Lambert.

Bi-National Gateway’s strategy is centered on establishing a “dual customs” facility at the new cargo terminal. In partnership with the Mexican government, dual customs shall operate through the on-site staffing in St. Louis of customs agents from both the United States and Mexico inside a Foreign Trade Zone. Both countries having customs operations working side-by-side at the new terminal will allow for “fast-track pre-clearance” of cargo shipments, expediting the clearing of goods as they are flown from one country to the other, and speeding up client supply chain efficiencies by up to two days. Today, there are Foreign Trade Zones established adjacent to Lambert, with any location within the City of St. Louis and St. Louis County also being eligible for FTZ status. 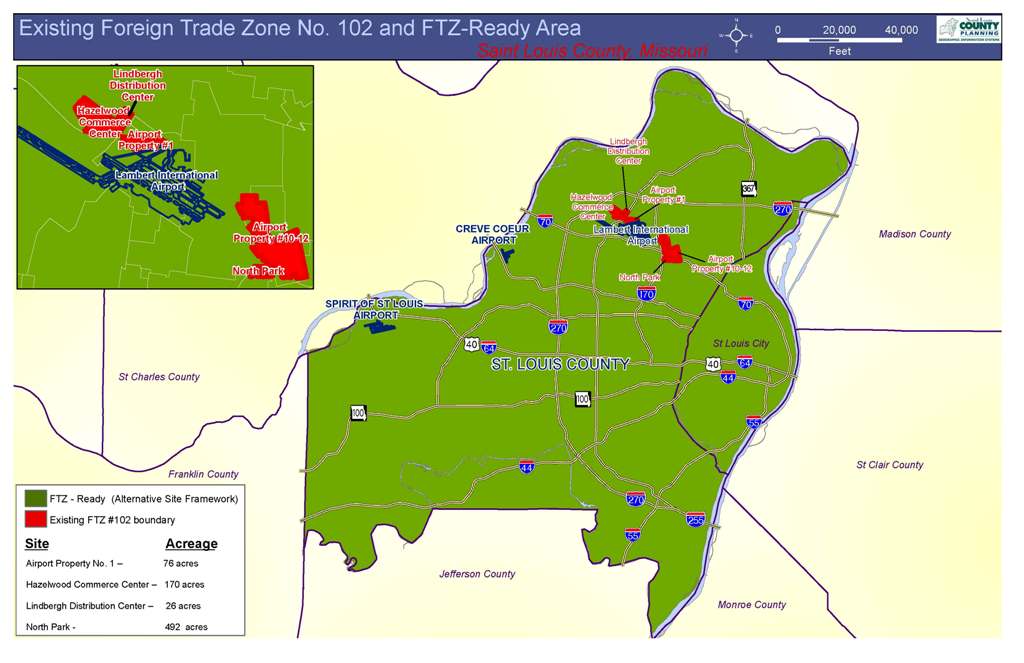 The concept of a dual customs facility is new in the cargo industry, but work furthering this initiative has been taking place for quite some time. In fact, negotiations have been ongoing between the governments of St. Louis, the United States, and Mexico about dual customs facilities at Lambert Airport since 2013. While the dual customs office will allow any goods shipped from this new facility at Lambert to fly anywhere in Mexico, the initial focus will be for flights into Mexico City.

This past April saw a series of meetings between local representatives and their Mexican counterparts. Held in Mexico City, the St. Louis delegation was led by Mayor Francis Slay, Airport Director Rhonda Hamm-Niebruegge, and Director of Cargo Development David Lancaster. This contingent of St. Louis leaders, which also included the World Trade Center-St. Louis, was joined by U.S. Ambassador to Mexico E. Anthony Wayne. The St. Louis delegation negotiated with a team of Mexican officials led by Governor Eruviel Ávila of the federal State of Mexico. Together, the parties reached a cooperative understanding that led to the authorization of this dual customs cargo center at Lambert Airport. As well, they agreed that these opportunities would include both Lambert Airport and Toluca International Airport, a feeder airport into Mexico City.

From this foundation, the new cargo terminal is being designed specifically for growing commerce between the United States and Mexico. Already, Mexico is the third largest trading partner for the St. Louis region, with the existing relationship already valued at $3.5 billion per year. Increasing our region’s relationship with our southern NAFTA partner has been a long-term objective for Lambert Airport, one that has come together over many years.

Bi-National Gateway Terminal will be constructing the new cargo terminal on the site of the former McDonnell Douglas fighter aircraft buildings. These buildings were acquired by Lambert Airport from Boeing more than a decade ago. They have sat mostly empty since that time, located just north of the airport and west of the main Boeing Company facilities. 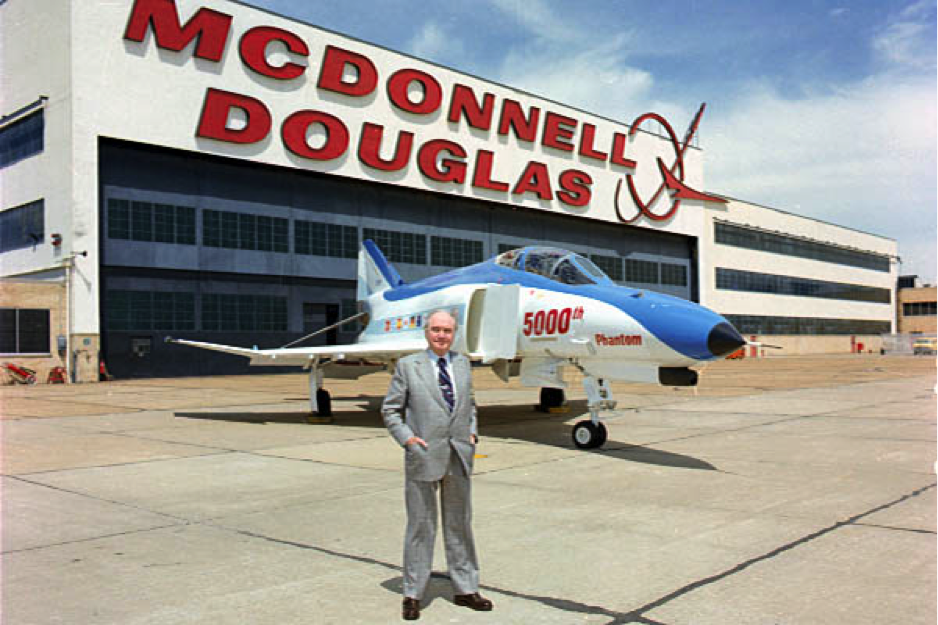 {May 9, 1978: James S. McDonnell, Founder and past Chairman of the Board of the McDonnell Douglas Corporation, standing next to the 5,000th F-4 Phantom II aircraft, built at the St. Louis production line}

Bi-National Gateway Terminal has signed a twenty year lease at the site, with two ten-year renewal options. The costs of new construction will be paid for entirely by the company. Lambert Airport will be providing the former McDonnell Douglas/Boeing buildings for the lease, which will provide direct gate access to the airport’s runways. Meanwhile, Lambert Airport shall not be making any direct capital investments into what is built at the site. In consideration of the lease agreement, Lambert Airport will not collect rent from Bi-National Gateway Terminal for the first 18 months of its lease, during which time construction is scheduled. This agreement is anticipated to generate $13.5 million in lease revenue for the airport.

Plans call for the new cargo terminal to be built in three phases. The first phase will consist of a 500,000sf dedicated cargo center, with 1M sf of cargo ramp and airline support infrastructure. This first phase will be spread out over 32 acres, taking 18-24 months to complete. When all three phases are complete, the new international cargo terminal at Lambert will occupy 49 acres. The new cargo terminal will operate as a multimodal cargo center, providing direct access to a rail spur and proximate access to I-70. The terminal can also capitalize upon proximate access to multiple business parks to the north, east, and west of the airport. And of course, by flying into St. Louis, proximate access is also available to the Mississippi and Missouri Rivers. 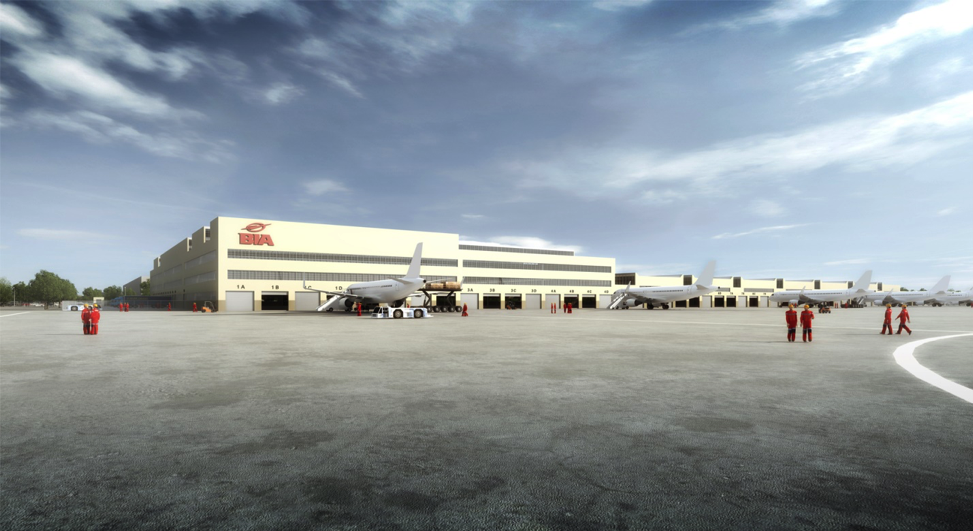 {“This is excellent news for Lambert St. Louis and fits perfectly with our airport strategic plan and the region’s focus on growth in the logistics sector. Lambert St. Louis is the ideal platform for this type of cargo operation, which exploits our strengths in terms of location and ease of intermodal connectivity with highways, rail and river.”
– David Lancaster, Director of Cargo Development, Lambert-St. Louis International Airport (quote provided via Handyshippingguide.com)}

The new cargo terminal will be capable of servicing both mid-size and wide-body aircraft. Mid-size freighters, such as a 757 or an A-320, are capable of ferrying cargo by the tens of tons with each flight in and out of St. Louis. Larger aircraft, such as a 747-400 or even a 777, can exceed 100 tons of goods shipped per flight. The return of regular wide-body flights to Lambert will certainly be a welcome sight, not regularly seen since TWA operated international routes out of the C and D Concourses.

The new international cargo terminal at Lambert Airport must still be approved by the St. Louis Board of Aldermen before Mayor Slay can authorize final approval to its construction.

There are multiple benefits this new international cargo terminal can provide to the St. Louis region. First among them is increased direct investment at Lambert-St. Louis International Airport being made by Bi-National Gateway Terminal, LLC. The opportunity to directly access markets in Mexico and Latin America will serve to attract new manufacturers and logistics companies into St. Louis.

In recent years, industries such as automobile manufacturing have established Mexico as a major center of production. These industries could also be better served by St. Louis being a hub for these industries’ domestic suppliers shipping pieces for final assembly in Mexico. And with greater competition for manufacturing emerging in regions such as China and Southeast Asia, this provides Mexico a greater opportunity to further diversify its production towards higher-end goods, noting a preference by some US industries to “nearshore” their international production.

The new cargo terminal can also serve to better attract freight forwarders to St. Louis. These are companies in the business of managing international logistics between markets, the people who actually schedule cargo to be shipped on specific flights and from specific destinations. Where certain freight forwarders have established their operations at existing international gateway airports such as O’Hare in Chicago and Hartsfield-Jackson in Atlanta, this new international cargo terminal can better attract them to ship their goods via St. Louis.

The new international cargo terminal also will further Lambert Airport’s efforts to create and effect a comprehensive plan for air cargo operations. As stated in the airport’s Five Year Strategic Plan, this will provide for a solid increase in total aeronautical revenues from logistics services, increasing valuation from unused lands, and increasing total employment at the airport.

Increasing cargo flights at Lambert Airport can also have benefits for passenger services, as many passenger flights already serve double-duty ferrying cargo as well as people. Consider that the average commercial jet houses passengers in the main cabin and luggage in the belly underneath seating. Often, these passenger jets also act to ship cargo loads in their bellies right alongside the passengers’ luggage. Meanwhile, airlines can make more profits from these “belly loads” than from regular passenger service in the cabin above.

Say a manufacturer in Philadelphia wishes to ship a pallet of cargo to a purchaser in Mexico City. That manufacturer can ship their cargo in the belly of a domestic carrier flying from Philadelphia to St. Louis. Those goods will then be offloaded and transferred to a direct cargo flight between St. Louis and Mexico City. The manufacturer capitalizes on the convenience of “dual customs” at the new international cargo terminal, and the domestic carrier that brought the shipment in from Philadelphia recognizes increased revenues from flying the shipment in their cargo hold.

All of this comes as many comparable airports around the US are downsizing. St. Louis was among the first major US airports to be on the losing end of the “Hub-Spoke” business model for passenger airlines when TWA was acquired by American, which subsequently dropped Lambert as a hub airport. The decrease in flights at Lambert Airport has had a rippling effect on the St. Louis economy, leading many local employers to relocate to markets with better passenger options (Anheuser-Busch, Clayco, and most recently Hardee’s) and some to reconsider relocation to St. Louis once the limited air options are fully realized (Archer Daniels Midland’s relocation to Chicago over St. Louis).

Other airports around the US have and will experience comparable decreases in service, especially as major domestic airlines continue to consolidate (Cincinnati, Memphis, Pittsburgh, San Jose, and maybe Charlotte after the US Airways acquisition). By proactively developing a hub for cargo at Lambert Airport, St. Louis provides itself an opportunity to recognize increased passenger service in an age of broad industry consolidation by increasing the value of passenger flights into our market.

Bi-National Gateway will open markets in the Americas; their efforts may also lead to increased opportunities to logistics companies that will service markets in Asia, the Middle East, and Europe in the relatively near future. What attracted Bi-National Gateway to St. Louis attracts comparable interests in the region as well. Very real and present opportunities to access these other markets exist today; the creation of a new international cargo center at Lambert Airport certainly helps bring these opportunities to fruition. There is plenty of developable land surrounding Lambert, many opportunities to welcome new logistics companies to the airport, and the chance to truly realize St. Louis’ potential as a true cluster of international air cargo operations.