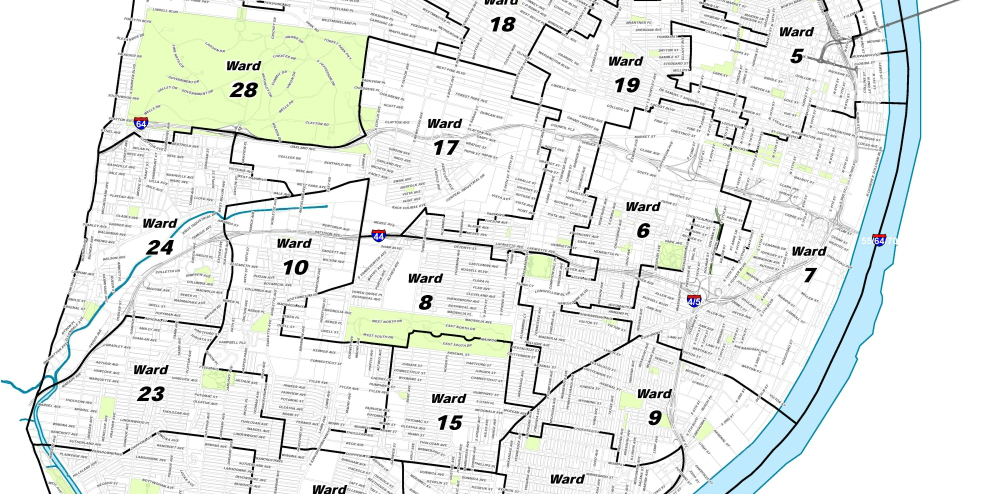 Endorsing candidates in Aldermanic races in the City of St. Louis is a bit silly. In any given year, just half of city residents are afforded the opportunity to vote for their ward representative. Voters have to remember that it’s effectively the Democratic primary vote (March 3) that determines the winner (though a second vote happens later – April 7). Each city voter gets to vote for 1/28 of all ward representatives. Turnout often fails to top 15 percent.

This all means that there is no real discussion of a vision for St. Louis, no slate of candidates pushing any particular issue to the fore, no energy behind a (even attempted) wholesale change. What we have is a system that is nearly immovable by design. In addition to being a governing quagmire, the fractured system means that elections are difficult to cover, even difficult to care about. For me there isn’t time to meet with every candidate, though this year I did manage to meet with every candidate who reached out and asked to meet.

The Board of Aldermen should be a legislative body. In reality, it’s not. Aldermanic courtesy often means each 1/28 of the Board gets what they want as long as they accede to the wants of the other 27/28. This means everything from closing a city street, to demolition of historic buildings for a gas station, never receive attention or review by anyone outside the 1/28 fiefdom. When city-wide issues come forward, it becomes a political power play, votes are bargained and bought. Not always, and not always explicitly, but this is what happens.

And the quaint governing-close-to-the-people argument doesn’t resonate. A tree fell on your street and you want to call the Alderman? You may have his or her cell number (especially if you contributed to the campaign) after all. What a way to run a city. Anyway, what’s a person with the opportunity to vote for 1/28 of the city’s ward representatives to do? Vote for the person most likely to challenge the status quo. Vote for the most inquisitive, questioning candidate. Vote for the person who owes political St. Louis the least.

This group of candidates can make one optimistic. For the first time since I moved to St. Louis in 2004, one can see an evolving power center on the Board of Aldermen, a progressive caucus. More than a couple veteran Aldermen have good ideas and seem progressive as well. Here’s the rub, these ideas can sound good on paper, but we’ve seen too many Aldermen sound one way and then get bent another on important votes. More than anything, we need people who are who they say they are, aren’t beholden to the existing political structure, and will risk their own office to create a better city.

Progressive candidates vying for Board of Aldermen seats on the city’s near south side find themselves in tight races against candidates backed by four-term Mayor Francis Slay and the city’s political status quo. Slay has focused his political energies this election cycle on keeping new faces off of the Board in several wards and on moving out a seated progressive in another.

For downtown St. Louis, Soulard, and other nearby neighborhoods, a special election will decide who takes the seat of long time Alderwoman Phyllis Young, who announced her resignation December 5. Jack Coatar, an assistant prosecutor, announced his candidacy immediately, as in within minutes, went live with a campaign website and announced Young’s endorsement. Why the rush? A lack of confidence? Was the machine simply ready to roll? Doesn’t matter. It was gross. Of course simply being anti-establishment isn’t a winning attribute, but the showy force of uber-establishment credentials is enough to lose this endorsement. All three candidates are under age 30. This in itself may be a victory, but Chelsea Merta is the right person for the job. She’s rightfully moved past the utterly stupid accusations of opponents, will bring a bevy of well-developed ideas to the ward, is a committed public servant, and will take a larger view of what’s best for the city. Slay has endorsed Coatar.

On the north side of Tower Grove Park in the 8th Ward, Kevin McKinney has Alderman Conway’s feet to the pavement in a door-to-door race that pits new ideas and calls for inclusion against what Conway calls “Progress You Can See”. McKinney, a former Tennessee Mayor, developer and husband to the CEO of Habitat for Humanity St. Louis, would be the first ever African American elected in a solidly south side ward. He’s been critical of his opponent flip-flopping on the idea of establishing a Civilian Oversight Board. Conway supports the idea today, but voted in the minority against it back in 2006. Conway also has the endorsement of Mayor Slay.

Alderwoman Megan Ellyia-Green and the 15th Ward race is another example of the mayor missing an opportunity to back a progessive candidate. Four months ago Green, an energetic newcomer, ran as an Independent and defeated three other candidates, including Slay-backed Democratic Committeewoman Missy Pinkerton-McDaniel. That special election was needed to fill the Aldermanic seat long held by staunch Slay-ally Jennifer Florida. Despite Ms. Pinkerton-McDaniel using her proximity to the Democratic Committee to ensure she was the only Democrat listed on the ballot, she finished third. Green was sworn in as one of the youngest members of the Board last fall.

Today Alderwoman Green, a life-long Democrat, who has been commended for helping to perfect, negotiate and ensure passage of the contentious Citizen Oversight Bill in committee, faces former Realtor Beth Braznell, who enjoys the backing and financial support of the Association of Realtors, the St. Louis Police Officers Association and the defeated former Committeewoman. Despite (selective) claims of always backing the incumbent, of supporting civilian oversight of the police and of embracing a more progressives agenda for City Hall, Slay has joined several status quo special interest groups in lending a helping hand against Green and her grassroots campaign. Ms. Braznell’s camp has gone negative in a most recent mailer, criticizing Green for pursing her PhD while in elected office and for welcoming “outside agitators” into the ward following the grand jury decision’s not to indict Ferguson police officer Darren Wilson.

In the 20th Ward, Cara Spencer is calling for reforming the city’s Land Reutilization Authority (the city’s vacant land landlord), streamlining review processes for new businesses and expanding MetroLink light rail to serve neighborhoods in north and south St. Louis — an unfulfilled promise made by regional officials when the first east-west line was built in 1993. For some reason, Mayor Slay has has failed to come out strongly in support of this project that is crucial to the city’s future. Spencer credits incumbent Craig Schmid, first elected in 1992, for his dedication in keeping the Ward afloat, but has publicly stated that City leaders should be more forward-looking and should do more than merely plug the holes of the dam as they spring a leak. Slay supports Schmid.

In the 24th Ward race, Alderman Scott Ogilvie has received the backing of Mayor Slay. Why? Who knows. The best guess is that either the mayor is betting on Scott winning and would rather be able to recall his endorsement when convenient, or perhaps former Alderman Tom Bauer is just that bad to work with. Ogilvie, by all accounts, is a responsive and productive alderman for his ward, but at least equally important he speaks out on city-wide policy more than anyone else. He’s also an independent thinker who can’t be bent on crucial votes. Whether it’s a north-south MetroLink expansion, city-wide bicycle policy, or more seemingly mundane fiscal matter, he has the necessary bigger vision. Oh yeah, he is actually a legislator as well, that is, he actually crafts policy.

The mayor isn’t up for election this year, but many progressives were disappointed in Slay’s support of the regressive sales tax known as Amendment 7, championed by rural legislators for (by and large) out-state highway projects. The unpopular measure was defeated statewide, including by 80% of City of St. Louis voters. Still more progressives felt betrayed when their Mayor offered his full-throated endorsement (via robocall) of a “Right to Farm” amendment. Right to Farm passed narrowly in the state of Missouri, but failed big in the City of St. Louis. By presumably lessening the margin of defeat in the city, Slay may have been key to its passage. There are reasons to be disappointed with local policy as well: a lack of vision on transportation policy, historic preservation, city bond issues, payroll tax, and more.

Slay himself is St. Louis’s longest serving Mayor, now in his fourth four-year term and reportedly considering a fifth. Perhaps it should come as no surprise then that Slay isn’t looking to invigorate the city’s legislative body. Progressive voters would be wise to be wary of the mayors chosen candidates. Of course there’s nothing particularly nefarious happening here. It’s simply easiest to govern with people who fall in line, or can be ignored. This must change in St. Louis. Your vote shouldn’t be against the Mayor or any of the candidates standing for election – they should all be applauded for taking the plunge and seeking public office. Your vote should be for a different St. Louis. Does the status quo, and the candidates endorsed by the mayor offer a safer, more economically vibrant city with fewer social divisions? You can and should be the judge of that.