As a child, I first really looked into the faces of my neighbors in a movie theater. The little-kid me looked up around the auditorium of the Capitol Theater in Waterloo, Illinois. In memory, there is a montage of red velvet, restrained plaster ornament, a heavy and promising curtain and all the faces. Old farmers, slightly intimidating adolescents, families huddled in rows — all from the small town and farmland around. Growing up outside of town, I only joined the masses at the Capitol — a former Odd Fellows fraternal hall built in 1914 and converted to cinematic use during the swan song of the silent in 1926.

I barely believe that the Capitol, now used for live performances and well-preserved, only held 250 people. The building seemed like it could house everyone in Monroe County, and I suppose over the years it may have come close, curtain-rise after curtain-rise. Every trip to the theater seemed like a habitation of a social life, and involved visits to get snow cones, a toy at the hardware store or some groceries. 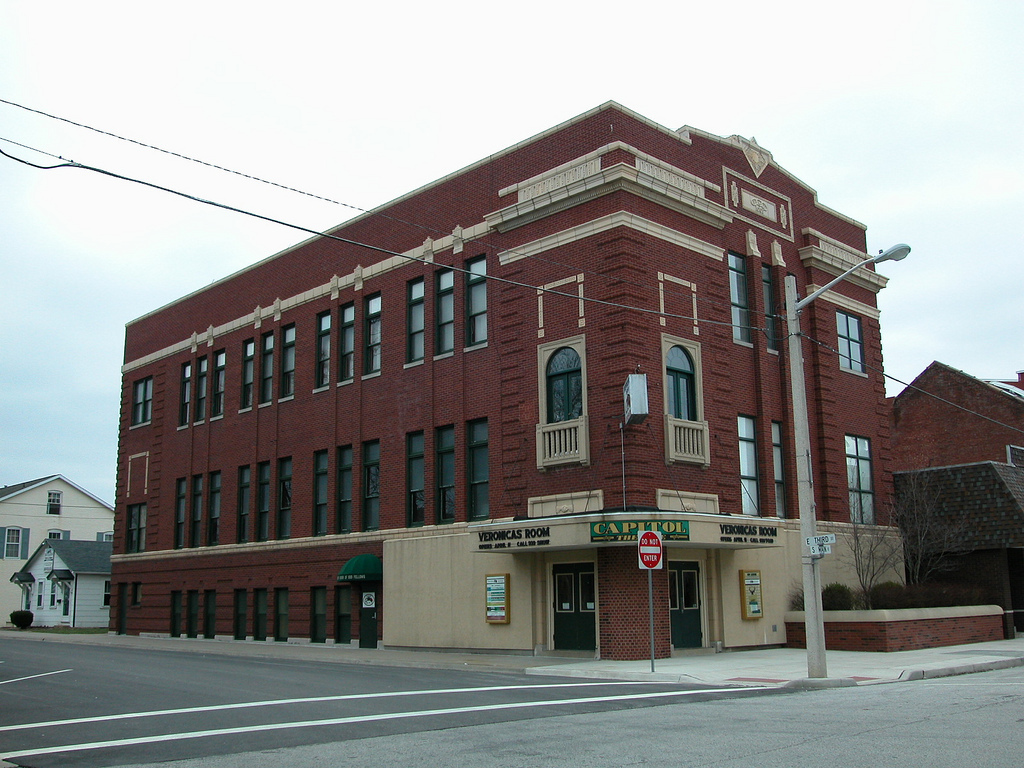 {the Capitol Theater in Waterloo, Illinois, where the author’s love with movie theaters began sometime back in 1987}

This week’s screening of Matt Amato‘s The Makings of You took me back to my childhood cinema days. Amato’s glorious work, something of ode to the specific beauty of the city, will play in a single screen theater of sorts – a converted church with a custom screen. While the film has played St. Louis before, it has not arrived yet on a neighborhood street corner. Top image: {Judy (Sheryl Lee) walks past the Melvin Theater on Chippewa in “The Makings of You.” Courtesy of Matt Amato}

One of the film’s stars, Grace Zabriskie, indulged my inquiry into how the venue for the screening conjures a special aura. Zabriskie told me of walks through her native New Orleans to various small houses, where the experience seems to displace the entertainment in memory. “Do I remember the movie? No,” she said, recounting instead the walks through the French Quarter or on Canal Street to and from the theater. One of these places of memory, the Gaiety — a “nasty little place” — is now an invisible essence dissipated in a private side garden, taking with it a cameo in Elvis’ King Creole shot on the block in 1958. 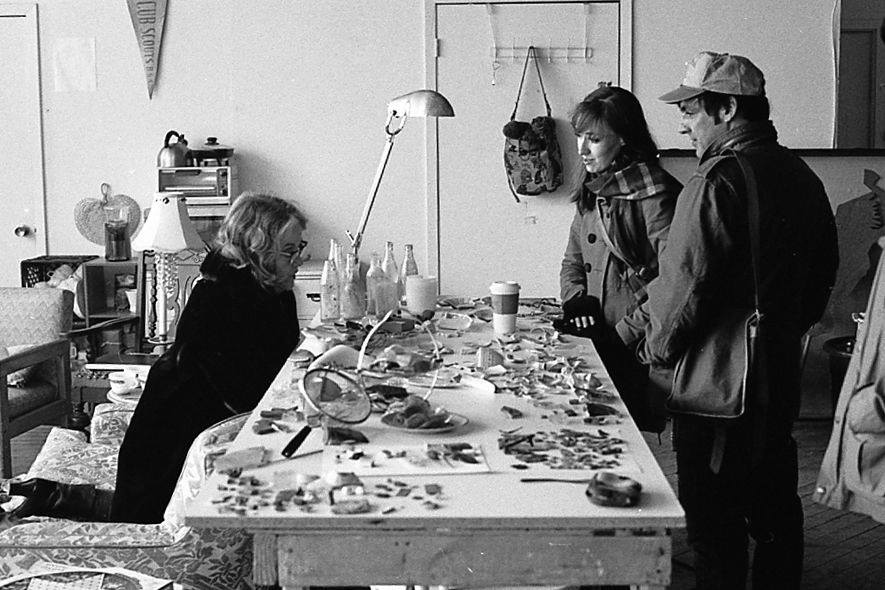 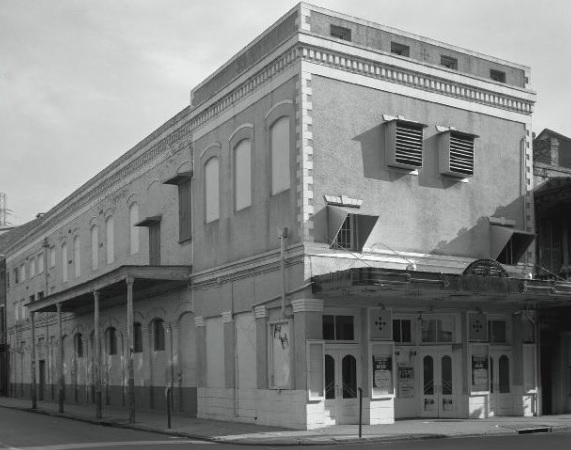 In Los Angeles, Zabriskie is a visitor at the Vista, which has a small seating capacity but premieres first-run films in the old fashion. The actress, whose roster of performances is deeper than her frank interview style would aver, observes the changes in the motion picture industry driving the decline of neighborhood theaters and theaters in general. The consolidation of distribution in chains or directly under studios made the economics of independent movie theaters nearly impossible to sustain. Then came the lure of personal viewing, which has reached its peak with streaming today.

Zabriskie sums up the new world of movies as a contest between “the lure of the pause versus the lure of communal experience.” She notes somewhat remorsefully that some films never even screen on the big screen, and their makers never see them on any screens ever. Removed one degree more are audiences, composed of countless people who share an experience in no real way. Hundreds of people may watch the same film at the same time, and never know it — and never meet each other, let alone share any responses. 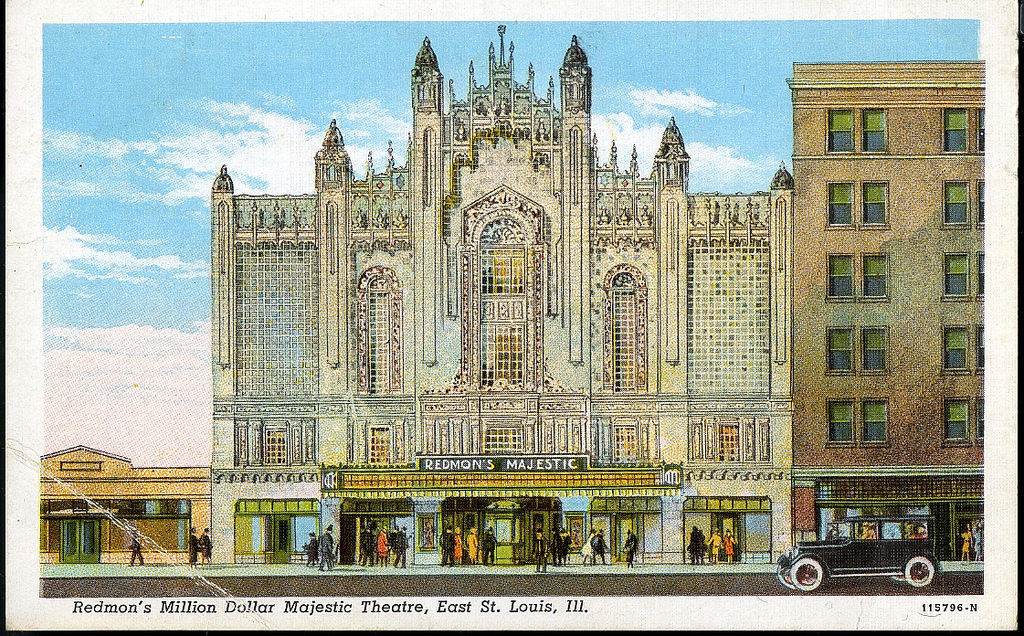 Amid the glow-lit faces of the streaming viewers, the only single-screen neighborhood theater still operating in St. Louis is the venerable Hi-Pointe. The city presents the upturned bodies of houses that in mind’s eye still shake with the flicker of the projector, but in reality sit in the din of this atomized age. Writer Thomas Crone offers the term “dead theaters” to describe the lot. The Melvin on Chippewa, the New Merry Widow on Chouteau, the baroque palace of the atmospheric Majestic in East St. Louis — all are indelibly theatrical while remaining ineluctably shuttered. The flip side places the old Columbia Theater on the Hill reborn as a spectacularly imaginative dwelling, Olive Street’s Art Deco gem the Beverly hosting diners at a Chinese restaurant, the Varsity’s floor home to Vintage Vinyl record sales instead of Rock Horror midnighters and the trusses of the Luminary on Cherokee Street providing a constant overhead clue about original function. 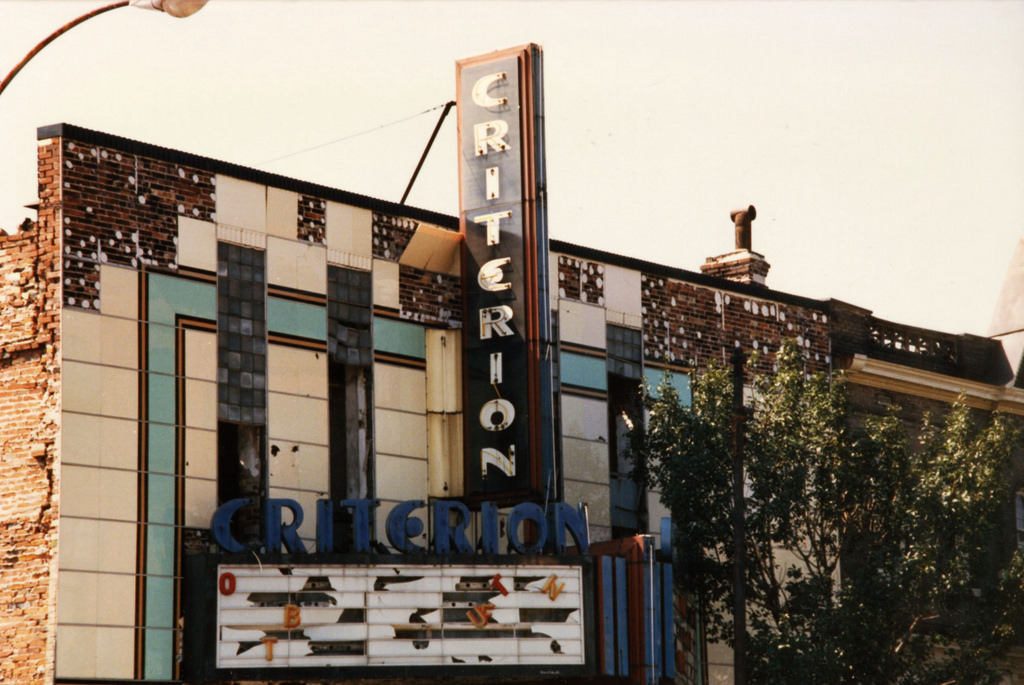 {the final days of the Criterion Theater on Dr. Martin Luther King Drive, circa 1993. Courtesy of Patrick Shortal}

The tragic record of theaters in St. Louis runs deep, from the sudden death of the Shady Oak, Aldi’s take-down of Gravois’ Kingsland to the slow deaths of north side houses like the Criterion – lost years ago — and the New Regal – felled just in 2006. The streamlined Ritz on South Grand came down for a parking lot because the city wanted to close the pornographic movie house using the building. That short sight is now buried under a different pavement, that of a plaza attempting to craft a new communal function to the site. 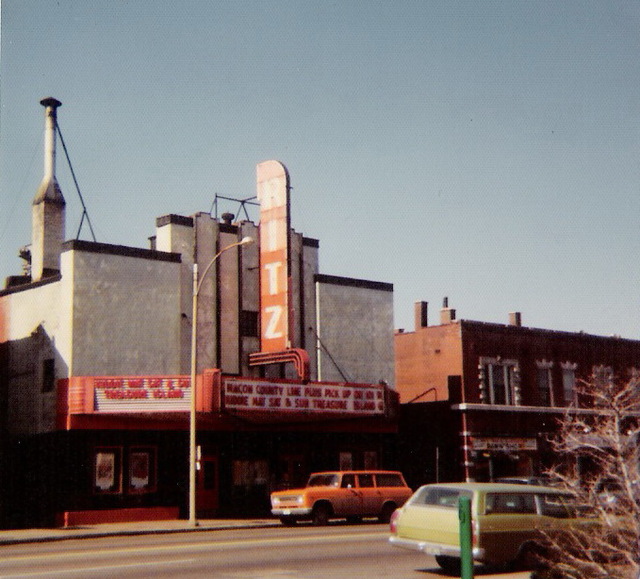 Yet in the litany of destroyed theaters, the most recent and perhaps most painful local entry is the Avalon Theater on South Kingshighway, a vexed vessel of entertainment that came down in 2012. At the time of the Avalon’s demolition, there was a group of investors who were serious about transforming it into a live music venue. Instead, the city government funded destruction of the building, a minor 625-seat Art Deco feature designed by A.F. and Arthur Stauder and completed in 1937.

The venue investors landed elsewhere, though — they opened the Ready Room on Manchester in the Grove last year. Whenever I head to a show there, I am transported backward. On the sidewalk during and after shows, there are the masses. Inside, lively hoards or quiet small clusters will behold the bands and deejays, in small homage to the audiences of the Capitol Theater of my youth. The Ready Room gathers people, for consumption of course, but with varying results that can keep the civic torch lit just one night longer. 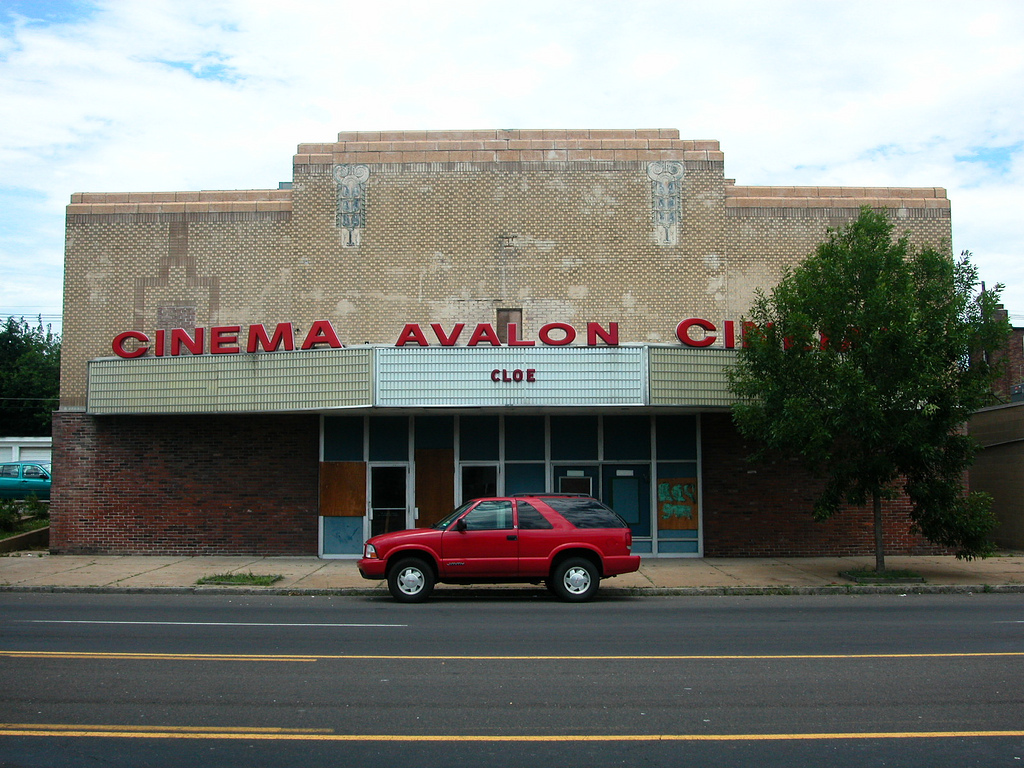 {the Avalon Theater, destroyed before it could reinvent itself as a community gathering space}

The quest for togetherness seen at the Ready Room could have energized South Kingshighway, where the Avalon site now collects the tumbleweeds of fast food wrappers. Gazing on that flat ground, perhaps existential questions are the only relief. One might conjure Binx Bolling, the protagonist of Walker Percy’s novel The Moviegoer, whose drifting existence in suburban New Orleans seemed only validated at the movies. Binx ponders his own quest for meaning, and muses to the reader: “What is the nature of the search? you ask. The search is what anyone would undertake if he were not sunk in the everydayness of his own life.”

Once, that search might have drawn us to other people, seated gazing at the same moving image. There might be a moment of collective consciousness there, that now is lost in our torrent of individual streams. The sociologist Max Weber would have called this moment and instance of gemeinschaft, or community, which he opposed to gesellschaft, or society. The work of building community comes from personal interactions informing beliefs and values, according to Weber. Society, on the other hand, is where beliefs and values stem from indirect interactions and formal roles. Going to the movies places one in a community, albeit temporary.

Zabriskie suggests that the community of theater-goers promotes more discussion and interchange. She describes talking before and after films as a major part of her memories. Inhibitions we wear daily in society fall away in the community at the theater “There is something about the freedom to laugh that happens with a large group,” she observes, distilling the Weberian concept of gemeinschaft to a specific freedom.

Although churches may be the architectural embodiments of community’s duality, the next screening of The Makings of The Makings of You will be in church – although desanctified. Amato screens his film Thursday at the former St. Matthew’s Evangelical Lutheran Church at South Jefferson and Potomac avenues, one block south of Cherokee Street. Somehow this adapted, if not adopted, choice seems sanguine. In the Gothic Revival mass of the church, designed by Ernst Janssen and completed in 1889, sunlight catches each red brick slightly differently. Winter evenings draw a tapestry of reflections that suggests the divergent ways individual experiences form community understanding — in church or at the cinema. 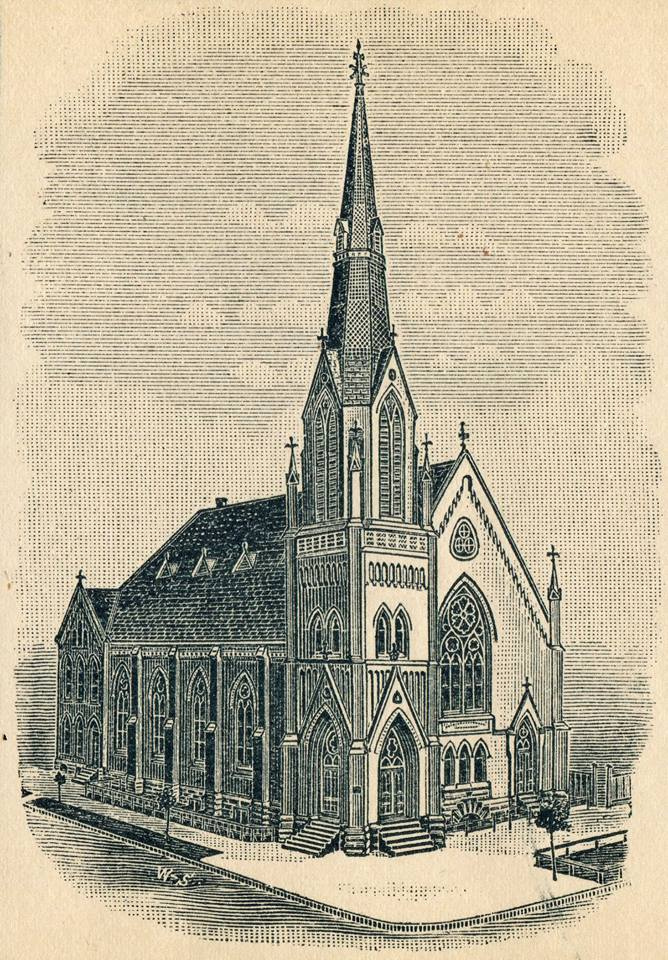 {Lithographic depiction of St. Matthew’s Church from the dedication program, 1889. Courtesy of South Side Spaces} 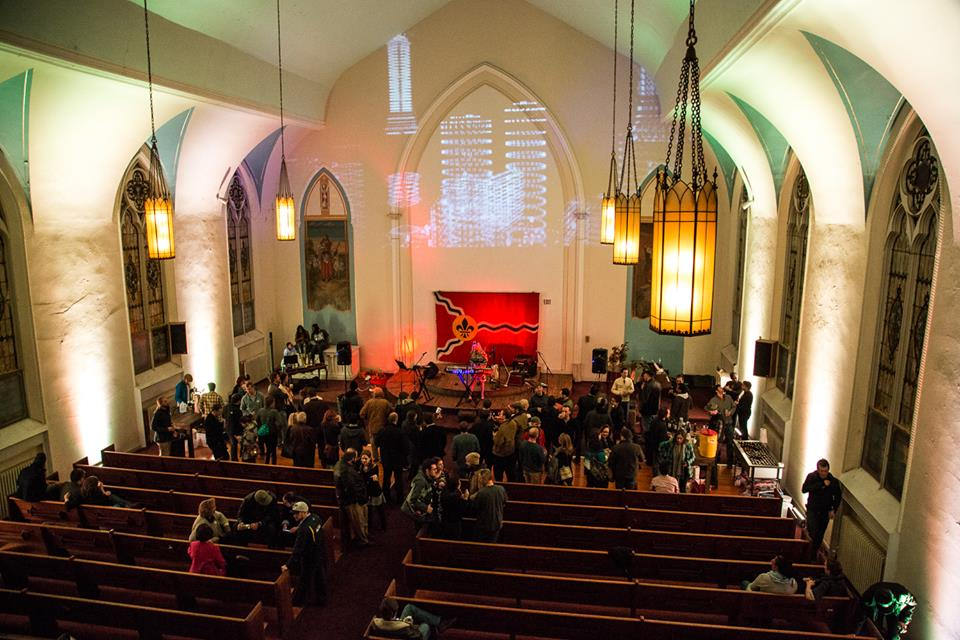 {the scene at St. Matthew’s Church during its first public function last month. Courtesy of South Side Spaces}

Cherokee Street and surroundings, featured prominently in Amato’s film, evokes the essence of Weberian community. Here personal interactions transcend the considerations of taste, popularity and occasionally even the law’s letter. Once upon a time, theater magnate-to-be Fred Wehrenberg landed his first nickelodeon at the northeast corner of Cherokee and Jefferson, now shops and apartments undergoing renovation.

In 1928, Wehrenberg purchased the massive Cinderella Threate, a former roller rink converted into an 1,800-seat palace by the Freund Brothers. The gleaming white terra cotta façades of the head house, designed in 1906 by William Wedemeyer, are all that remains. The dreamscape of the auditorium rises invisibly above the torn asphalt of a parking lot, while the owner is restoring the facades currently. The impossible-made-possible and possible-made-impossible live on as tortured neighbors, separated modestly by a fence a la It Happened One Night. 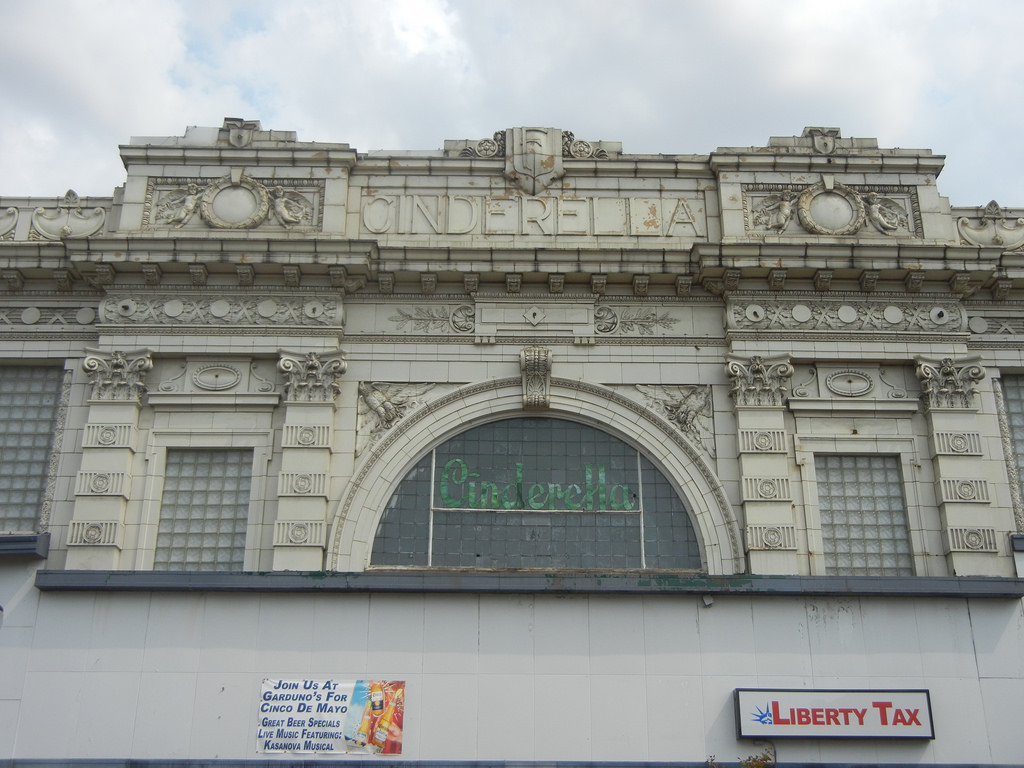 The ghosts of lost theaters are planted in the city’s collective hippocampus powerfully. Last May, amid the architectural collections at the National Building Arts Center, I happened upon St. Louis Mayor Francis Slay. Of all of the photographs of buildings from which the collection has come, Slay walked over to a display board on Gravois’ lavish palace, the Granada Theater. The Granada’s 1926 Spanish baroque façade lies crated at the National Building Arts Center, after being rescued in 1992 during untimely demolition. Often a calm and understated man, the mayor was giddy as he pointed at a photograph of the Granada. He broke into a big smile as he recounted screenings there. 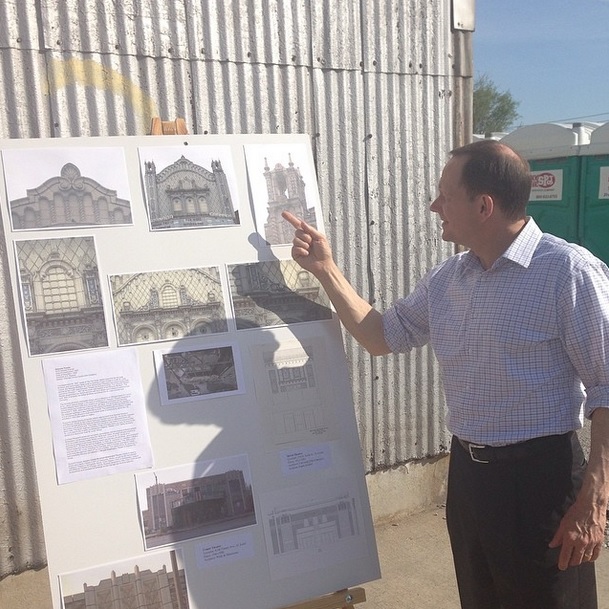 The landscape of urban memory has its focal points for all of us, and movie theaters are among the most widely shared. Whatever city we build without many of them will have to find substitutes, where we may seek experience that truly forges informal, diverse community. I shudder to consider what the next few decades of architecture in the era of the smartphone will bring, as the visages of dreamy lost theaters unfold. The fate of the neighborhood theater as we knew it presents a lugubrious fact, but it is balanced with the sort of architectural monkey-wrenching represented by South Side Spaces‘ conversion of St. Matthew’s.

St. Matthew’s symbolizes the shifting forms of both Weber’s community and society – both neighborhood movie theaters and neighborhood churches are endangered architectural forms. The building is a hybrid, resurrecting the use of one in the form of another. This week people will pass through its doors, looking for something. When they leave, perhaps they will have found some version of it in Amato’s film, in the new south side community gathering space, or in each other. At least, they will be looking together. As moviegoing existentialist Binx Bolling told us: “To become aware of the search is to be onto something. Not to be onto something is to be in despair.”

Thursday’s screening of The Makings of You opens at 6:00 p.m. with screening starting promptly at 8:00 p.m. at 3457 S. Jefferson Avenue. Details can be found here.

Michael Allen is Senior Lecturer in Architecture, Landscape Architecture and Urban Design at the Sam Fox School of Design and Visual Arts, Washington University in St. Louis, and Director of the Preservation Research Office, a heritage consultancy. He resides in the Dutchtown neighborhood of St. Louis down on the state streets. Contact him at [email protected]
View all posts by Michael R. Allen →