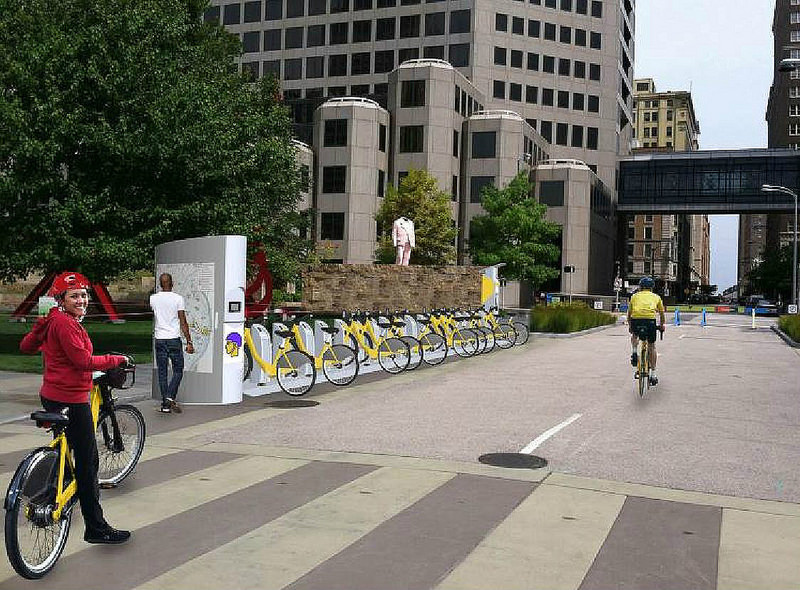 With the Great Rivers Greenway release of the Bike Share Study Report to the Community, it appears that St. Louis is poised to join the dozens of American cities investing in a transportation network with more choices for more people. The 116-page comprehensive report (below) outlines a two-year roll out of 60 stations with 540 bikes, with 30 additional stations and 250 bikes to follow.

Phase I would be concentrated on the central corridor, from Downtown to The Loop. A second phase envisions expansion to include the near south and near north sides, as well as downtown Clayton. A third phase would expand further north and south, and follow the MetroLink Blue Line in St. Louis County. The cumulative bike and station implementation costs are estimated at $12.4M-$13.7M, or approximately the cost of rebuilding 1/4mi of I-64 in the city. The feasibility study anticipates 217,000 bike trips using the system in its first year of operation. GRG has clearly done its homework, or at least Alta Planning + Design has laid out the bike share landscape in an exhaustive manner. It’s up to local stakeholders, residents, and GRG to set expectations, choose the best system within the St. Louis context, implement the right plan, and then be nimble enough to continually adjust. There’s zero reason a St. Louis bike share system won’t be successful.

With a bike share system seeming imminent, the next, and most important, challenge for St. Louis is to invest in on-street bicycle infrastructure. This means protected bike lanes, two-way bike highways, bicycle storage lockers at busy MetroLink stations, painted bike boxes at intersections, and more. Bike share would represent a huge step forward for St. Louis, but there an entire additional level of commitment needed to make it work.

Is St. Louis ready for bike share?
Across the nation, more than thirty cities such as Washington, DC; Kansas City; Indianapolis; Denver; and Chicago have implemented public bike sharing programs. Great Rivers Greenway, with many public and non-profit partners, has completed a feasibility and implementation study conducted by Alta Planning + Design to evaluate whether or not a bicycle sharing system is financially and operationally feasible in St. Louis.

What is a bike share system?
A bike share system is a network of shared bicycles available for short-term use – usually 30 to 45 minutes. As a membership-based or daily pass program, riders check out a bicycle from a network of stations, which are usually placed within a 1/4-mile to 1/2-mile radius of each other. They ride to a station nearest their destination, and then safely dock the bicycle for someone else to use. The major difference between bike sharing and bike rental is trip duration. Bike rental programs are typically designed for longer recreational rides, while bike sharing programs emphasize shorter errands or trips from point A to point B and the last mile of a commute. Bike share programs also aim to increase transportation options by helping people move quickly about their neighborhood or connect with the larger community without using a car.

What are the benefits it could bring to St. Louis?
Even a medium-sized bike share system (300-800 bikes) can bring significant benefits to the City and communities in St. Louis County. In mid-sized cities like Minneapolis, up to 25% of users reported using bike share instead of driving their car or taking a taxi. Another benefit is public health as the thousands of trips taken every month help to burn millions of calories with active transportation. Finally, bike share is good for business. In other cities, businesses located next to bike share stations in other cities report improved sales, especially eating and drinking
establishments.

Who would own and operate a bike share system in St. Louis?
Based on the results of the feasibility study, the recommended model for a bike share system in the St. Louis region is a non-profit ownership with operations performed by the non-profit or contracted out to a private bike share operations company. Bike share ownership is a better fit for a non-profit 501(c)3, whose Board would be comprised of key political, corporate, institutional and community leaders and organizations. This model offers involvement of numerous stakeholders, neutral governance, the ability to raise sponsorships and donations, and the ability to reinvest profits in expansion over time and operational improvements. Comparable examples are Pronto Cycle Share in Seattle, Nice Ride Minnesota in Minneapolis/St. Paul, and San Antonio B-Cycle.