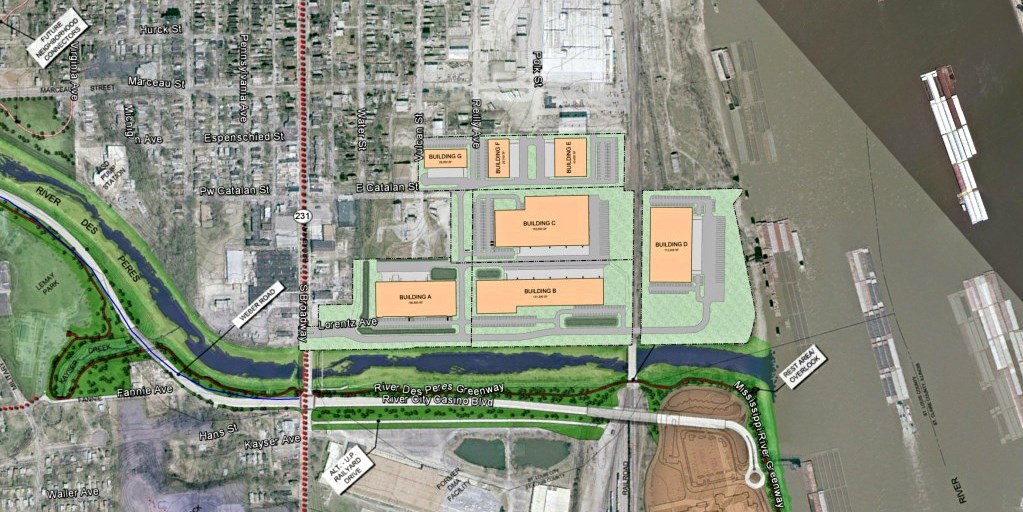 What does a 54-acre brownfield site off River Des Peres near the Mississippi have in common with the Urban Chestnut Brewery in The Grove, the LEED Platinum Sheet Metal Workers Local 36 Training Center at Jefferson and Chouteau, and the former Wetterau Inc. site In Hazelwood? The common denominator is the vision of development firm Green Street St. Louis.

The company’s latest venture – River City Business Park, located just north of River City Casino – has been over six years in the making. Green Street will break ground in the first quarter of 2015 on a 125,000-square-foot spec building in the River City Park – the first part of 725,000 square feet of projected construction on the site, Phil Hulse, Green Street principal, said.

The original site – the former Carondelet Coke plant – was 42 acres. Green Street was selected by the City of St. Louis as the developer after an RFP process. Green Street acquired another 11.7 acres in order to create an efficient entrance to River City. This brings the total site to 54 acres, with 42 owned by the City.

“The City had to stay in ownership,” Hulse explained, because of huge environmental liability associated with the site. As the property is developed, the land ownership will transfer.

The project is being developed using a mix of financing mechanisms — $58.65 million in private equity, $3 million in New Market Tax Credits, and $7 million in Community Improvement Funds and tax increment financing (TIF). The CIF/TIF dollars are being used for streets, utilities, and a rail crossing. The land that Green Street acquired at the entrance to the park will help connect the site to neighborhood businesses along South Broadway. Major neighborhood anchors include the Italgrani pasta flour milling facility, New World Pasta, and River City Casino.

River City Site Plan Mitigation work on a monumental scale has been completed on the site over the past few years. The property had operated as a steel plant from 1870-1896. Laclede Gas bought the site in 1918 and built the first coke oven on the site to produce coke and gas. In 1950 Great Lakes Carbon bought it and built some 40 coke ovens on the site. Carondelet Coke, owned by J. Donald Crane who has other coking facilities in New York and Pennsylvania, bought the facility in 1980. In 1987, Carondelet shut down operations. In 1994, the Land Clearance Redevelopment Authority (LCRA) of the City of St. Louis took over the site for back taxes. In the ensuing years the site sat vacant.

Coke is some of the most noxious stuff around from an environmental perspective: coal is cooked in furnaces to drive off volatiles, producing a pure, high-carbon, high BTU fuel that is used in a number of applications, notably in the production of steel. While new coking facilities – such as Suncoke’s plant in Granite City, IL – use recapture methods to produce energy from the off-gases, older coking methods historically coated the surrounding landscape with some of the most toxic waste known to man. This was the case at Carondelet.

In addition there was asbestos in the buildings and chemicals in the buildings, soil, and groundwater. If that was not enough, the Cardondelet site had additional issues in that while it sat vacant it became the site for illegal dumping of asbestos-laden construction wastes.

While all three firms that owned the site – Laclede, Crane, and Great Lakes, which is owned by a German firm, SGL – are still in operation, no serious effort was ever mounted by the State or City to get them to pay the full costs of mitigation of the site. Environmental Operations, Inc. was hired by the state of Missouri to assess the program and develop the mitigation effort.

In 2009 the State of Missouri committed $6.9 million in brownfield tax credits to cleaning up the site. The state approved Environmental Operations self-performing the work. Before the work even began soil tests revealed high benzene and naphthalene – off-products of the coking process. The tab on the mitigation eventually climbed to $12.3 million and the state had to go to the brownfield credit well again.

The challenges in developing the River City Business Park are the sort of things at which the Green Street team have excelled. They take orphan properties that offer great locations with good bones and repurpose them. The company has demonstrated skill in navigating the political thicket of St. Louis development. It has also taken a leadership role in sustainable redevelopment, for which it was recognized as a 2014 winner in the Missouri Gateway Chapter, U.S. Green Building Council “Growing Green” Awards.

Green Street – owned by Hulse and Kevin Morrell, former owner of Midwest Aerials – is comprised of four companies operating in brokerage, development, and consulting. This summer it added a general contracting and construction management arm, headed by Pete Arman, formerly with Kadean Construction.

Green Street is just completing construction on its headquarters in the former Mini of St. Louis building on Ladue Road near Brown Shoe. The site is emblematic of the Green Street approach to development, which Hulse describes as, “taking a really good large location and spreading the risk (among multiple tenants).” The former auto dealership will house, Green Street; Salon Lofts, which rents spaces to stylists; and a Charles Schwab brokerage office.

Tom Finan is the Executive Director of Construction Forum STL. Tom has served as a publisher, business developer, marketer, and communicator, primarily in the construction field, for 38 years. He was been the publisher of St. Louis CNR magazine from 1976 until assuming the executive director position at Construction Forum STL in June, 2014. He has published magazines and developed marketing communications, and managed events locally, regionally, and nationally. Finan has a Bachelor’s degree in communication from SIU-Carbondale and a Masters degree in Communication from Webster University with an emphasis on interactive media. The title of his 2010 Masters thesis was “Collaboration, Communication, and the Future of Construction.”