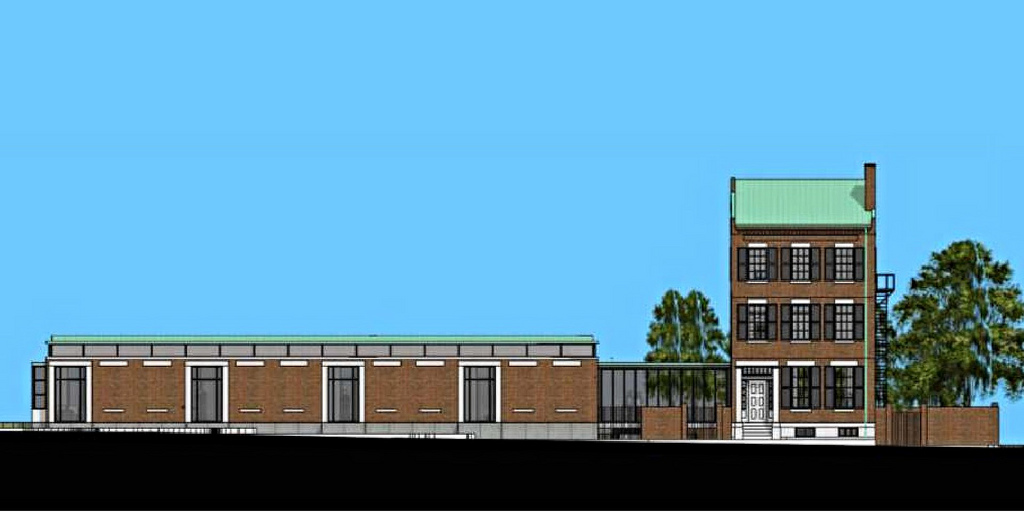 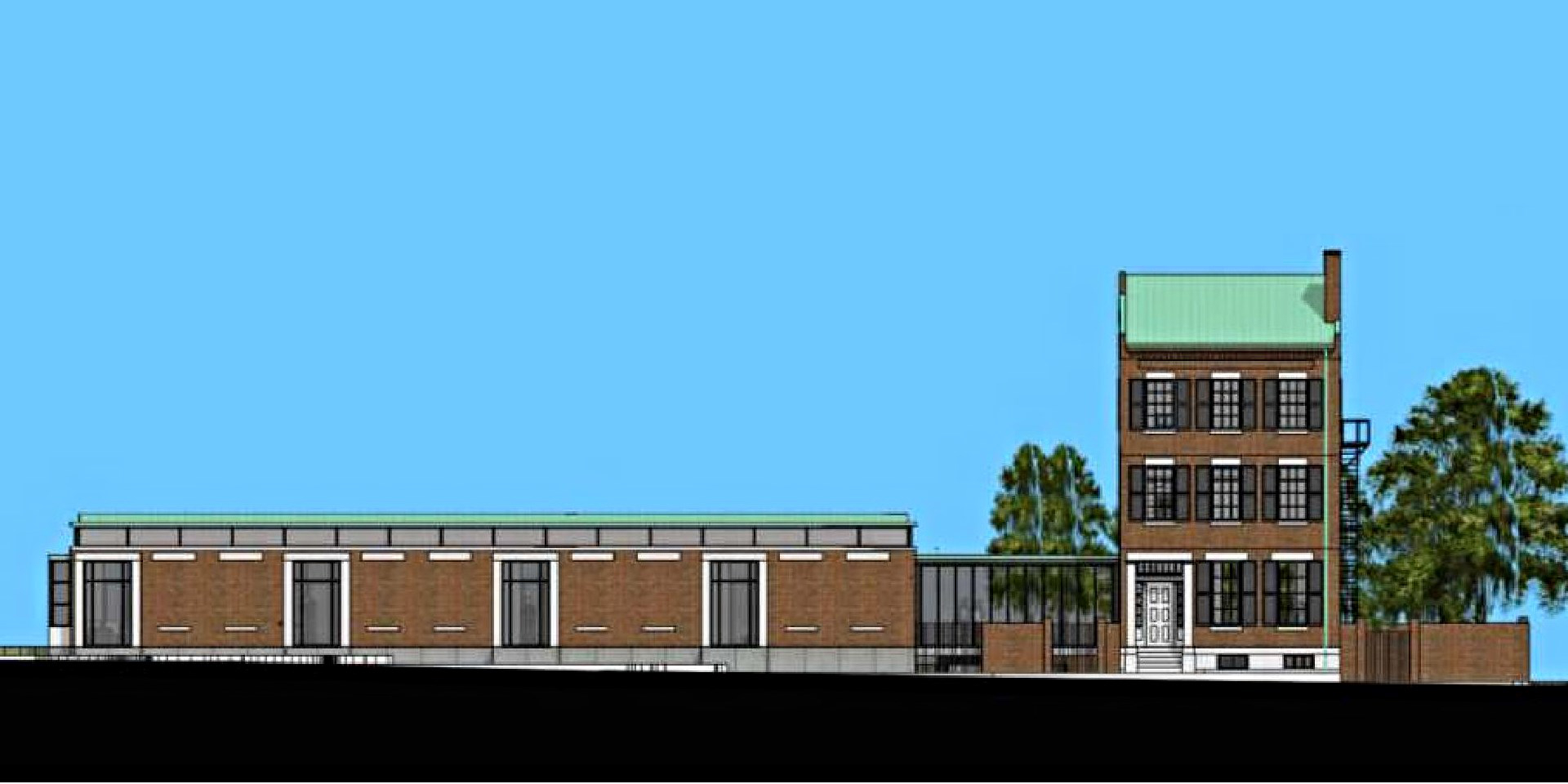 The Eugene Field House historic home and museum in downtown St. Louis has received city approval for its planned $2.7M expansion. Built in 1845 (or 1829 according to some sources), the home’s designation as a city landmark in 1971 means that any alterations must be approved by the city’s Preservation Board. Interestingly, according to the city’s Preservation Board materials, review jurisdiction only applied to the parcel at 634 South Broadway due to the lack of any adjoining historic district, or other context.

The proposal by the Eugene Field House Foundation is for a mostly glass connecting bridge to join the existing home with a single story museum addition, roughly the width of five of the original row houses, to the north. Windows and other fenestration are placed to recall the past adjoining homes. Only alterations to the brick wall and window dating from the 1930s, and proposed bridge, required Preservation Board approval.

The immediate historic context for the Field House was gone by the 1930s. When we say that today there is virtually no context nearby, we’re not exaggerating. Unless one were building a surface parking lot or highway ramp, there’s nothing in the vicinity to reference. Part of Walsh’s Row, the home was threatened with demolition in 1936. Although the rest of the row homes were demolished, 634 South Broadway became the Eugene Field House Foundation that year. 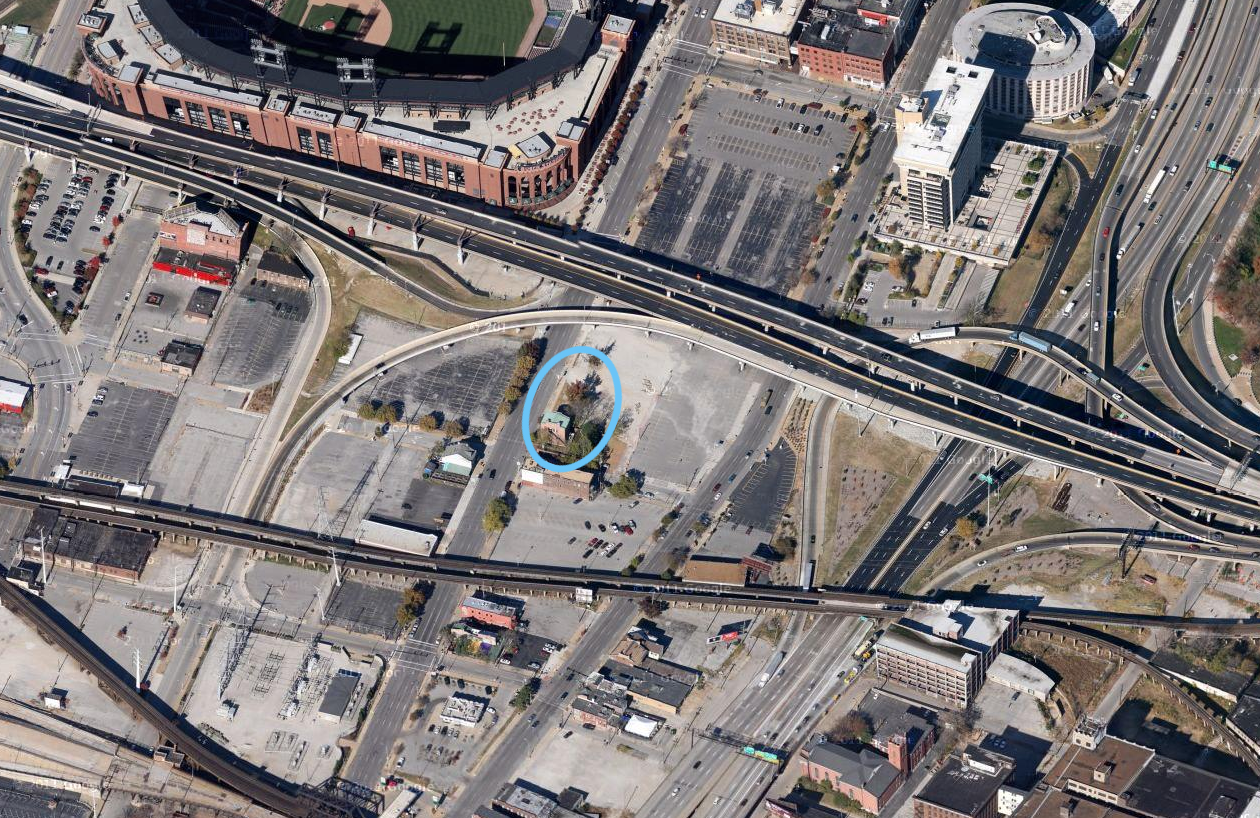 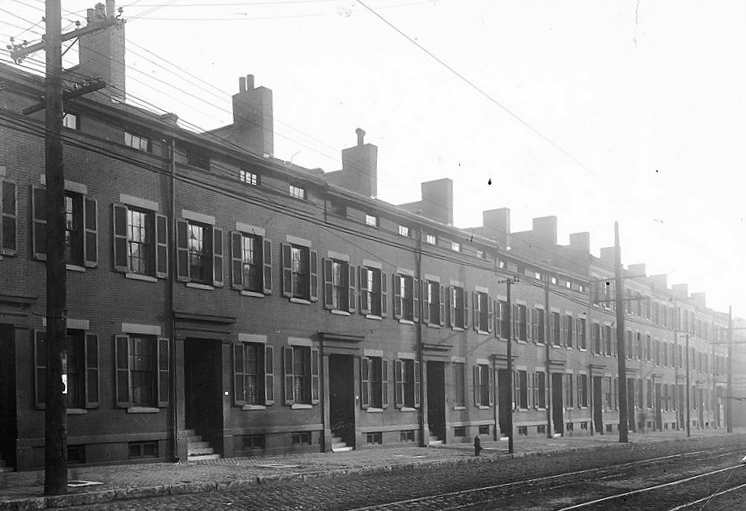 {634 South Broadway appears at the far right in this image}

The home may have a more interesting history as a museum and historic site than a home. During what was reportedly his final trip on the Mississippi River, Mark Twain unveiled a memorial marker to Eugene Field, on the home. The occasion was front page news in the St. Louis Globe Democrat and according to legend at least, produced two memorable quotes. Having been told by Eugene’s brother that he was in fact born elsewhere, Twain replied, “Officially and for the purposes of the future, your brother was born here.” To the same information, Twain has been said to have replied, “Never mind. It is of no real consequence whether it is his birthplace or not. A rose in any other garden will bloom as sweet.”

Though known by many, perhaps most, as a toy museum today, the home is a designated city landmark due to its namesake’s father. Roswell Field was a successful St. Louis attorney best known for representing Dred and Harriet Scott, and their daughters, in federal court. While a St. Louis jury found in the Scott’s favor, the Missouri and United States Supreme Courts ruled that as African Americans, the Scotts were not citizens, lacked standing, and so could not sue for their freedom in federal court.

Eugene was well known in his own right as a poet and journalist. He lived at 634 for fewer than seven years, having been sent to be raised by a cousin in Amherst, Massachusetts following the death of his mother. Eugene eventually returned to Missouri, attending the University of Missouri in Columbia, then working in St. Joseph, Missouri, and returning to St. Louis from 1876 to 1880 before moving on to Kansas City, Denver, and Chicago. He has a star on the St. Louis Walk of Fame in the Delmar Loop, and a couple dozen elementary schools from Indiana to California named in his honor. Eugene died from a heart attack in Chicago at just 45 years of age. 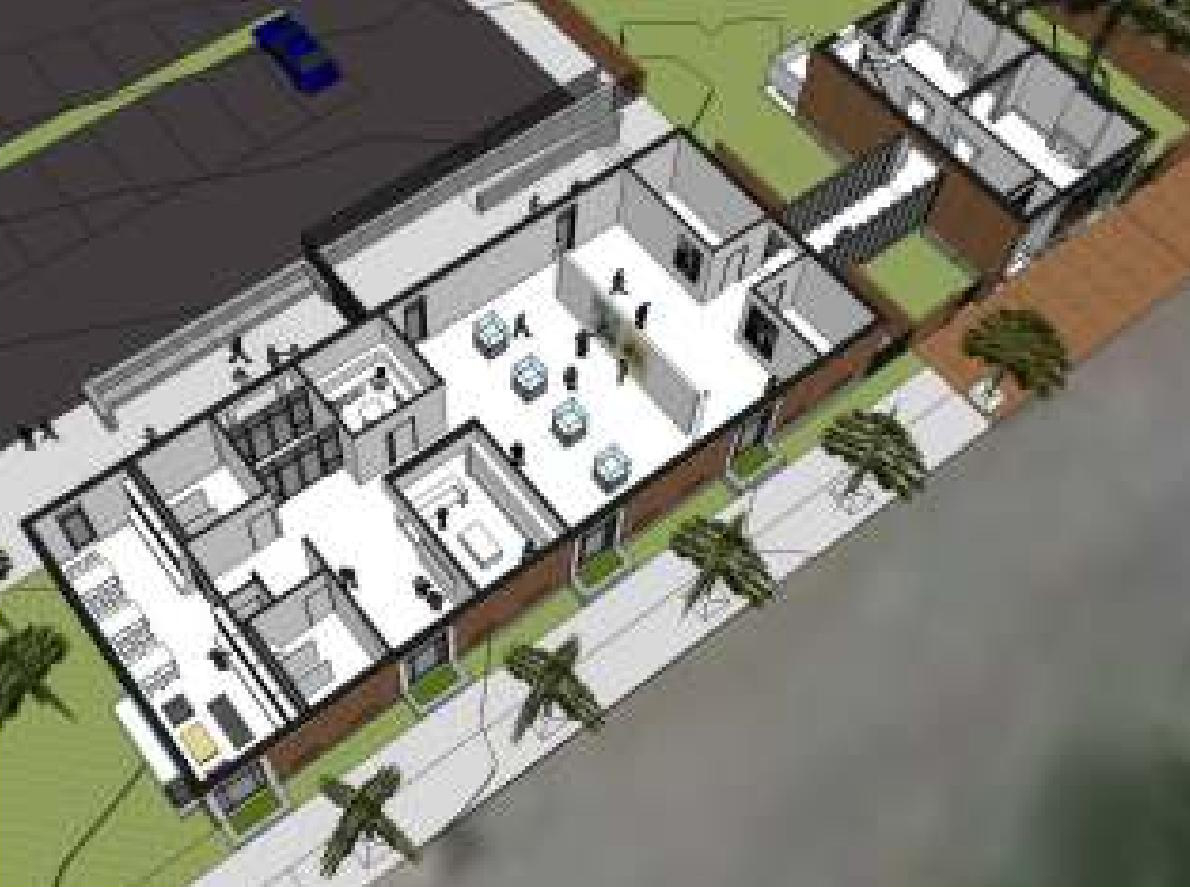 The addition to the museum will do a great deal to enhance the historic site. The Preservation Board was tasked with considering, “When an historic setting is compromised, the extent to which a context provided by new construction enhances the property or detracts from its presence is a key factor.” This is meant more to avoid a White Castle immediately next to the Field House, than to concern architectural particulars of a museum addition.

Ultimately, the planned addition is surprisingly thoughtful, if unadventurous. The project first had to minimize disruption of the existing site, and then perhaps provide something that would inform visitors as what had once been. Conscious of the fact that more intrusion on the 634 South Broadway parcel would have invited added scrutiny and that a two-story addition may have swollen the budget and perhaps even been less practical in use, it would have been great to see something bold. A largely glass facade repeating the Walsh’s Row street face could have presented an inspiring vision. Aside from poorly illustrated dreams, the planned addition represents a smart, significant step forward for the Eugene Field House Foundation. 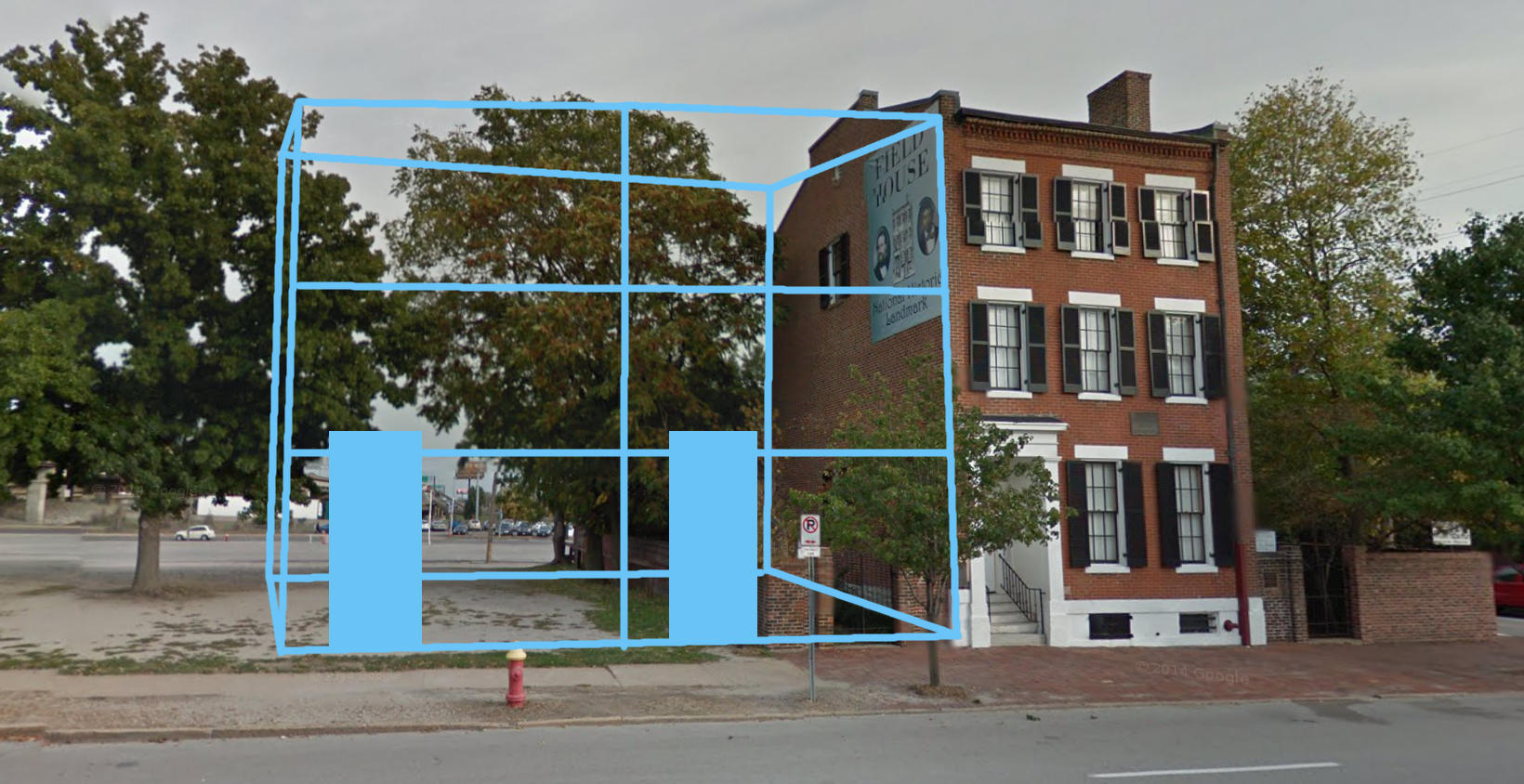