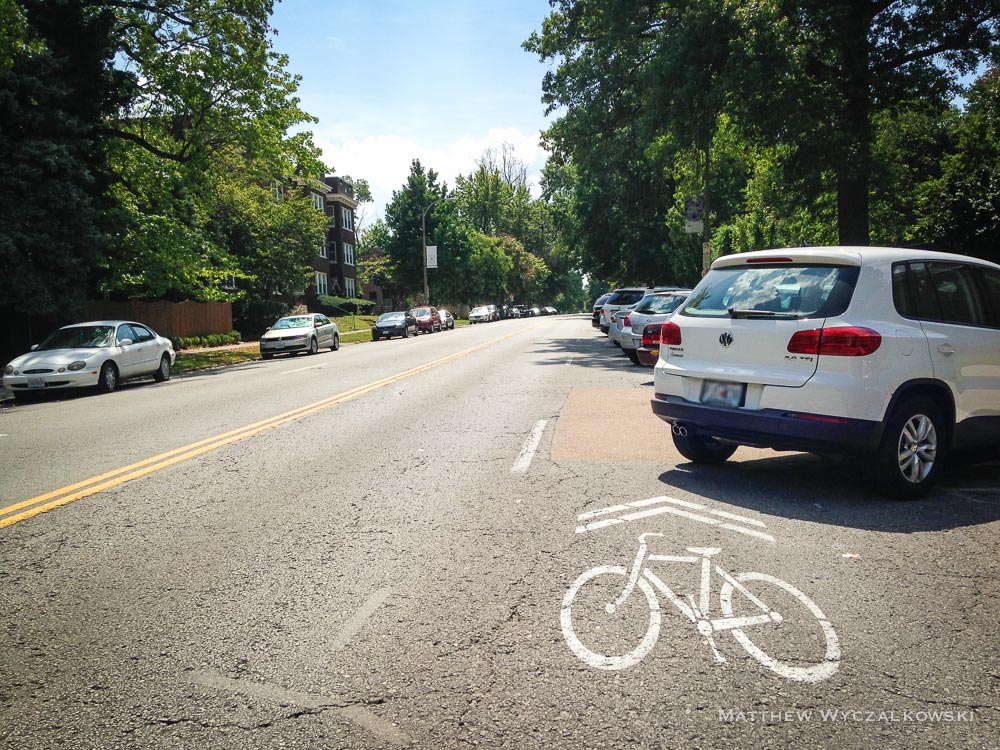 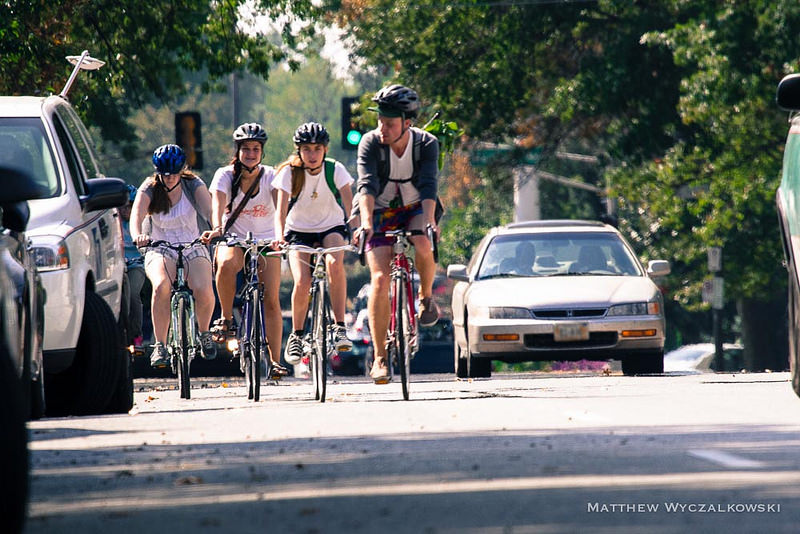 {Tower Grove Avenue is lovely to ride. Cars take the left lane and cyclists take the right next to the Botanical Gardens. This safe and enjoyable arrangement helps make this road a key St. Louis bicycle corridor.}

In the Fall of 2014 a section of Kingshighway Boulevard – a major St. Louis arterial – will close for a year and a half to rebuild a bridge, and a lot of cars will need to find alternative routes. What will happen to cyclists on Tower Grove Avenue, a principal north/south cycling corridor a half mile to the east? The City has in its hands plans to build bike lanes which would preserve bicycle safety on this route, but those plans are being scrapped to maximize traffic flow – no matter the cost to the road’s cyclists, pedestrians, and neighborhoods.

Tower Grove Avenue next to the Botanical Gardens is a jewel of a road, with wide right lanes and no intersections. Cars usually drive in the left lane and cyclists on the right, with plenty of clearance from parked cars, making the right lane feel like a bike lane. With no viable alternative routes for cyclists, Tower Grove Avenue serves as a critical north/south bicycle corridor. Its relative safety and convenience are a big reason Tower Grove Avenue is the busiest cycling route in St. Louis. 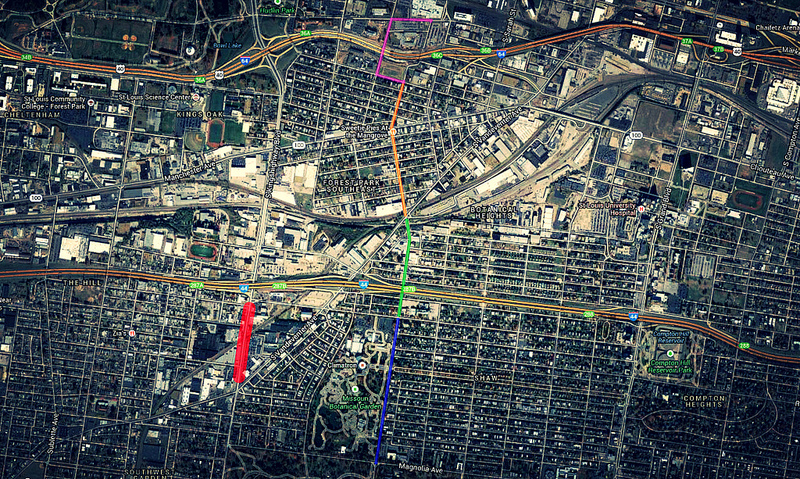 {Tower Grove Avenue. The road, mapped above with colored lines, runs north from Tower Grove Park to the Cortex District and the Central West End. The South Kingshighway Viaduct, highlighted in red, is being rebuilt. In this post we are focusing on southern Tower Grove Avenue (blue and green sections above) when Kingshighway closes. (Click map for details)}

Still, there are a number of hazards cyclists face daily. During heavy traffic cars will sometimes drive in the right lane, and this “bike lane” arrangement breaks down (see photo below). Such driving is often aggressive, and is very alarming and intimidating to cyclists. Cars driving in the right lane are especially dangerous when both the driver and cyclist approach parked cars.

Another problem occurs on certain summer weekends, when cars park at 45-degrees on the southbound lane of Tower Grove Avenue for events at the Missouri Botanical Gardens (see photo below). This increases the parking along Tower Grove Avenue but causes major problems for riders. Cyclists must ride in the left lane with car traffic, which is intimidating to many riders. Worse, drivers pulling out cannot see cyclists until they’ve completely blocked their path, a real hazard for all cyclists.

Heavy traffic, right-lane driving, and angled parking pose a constant danger to cyclists on this generally safe and popular cycling route. Unfortunately, things are about to get worse. 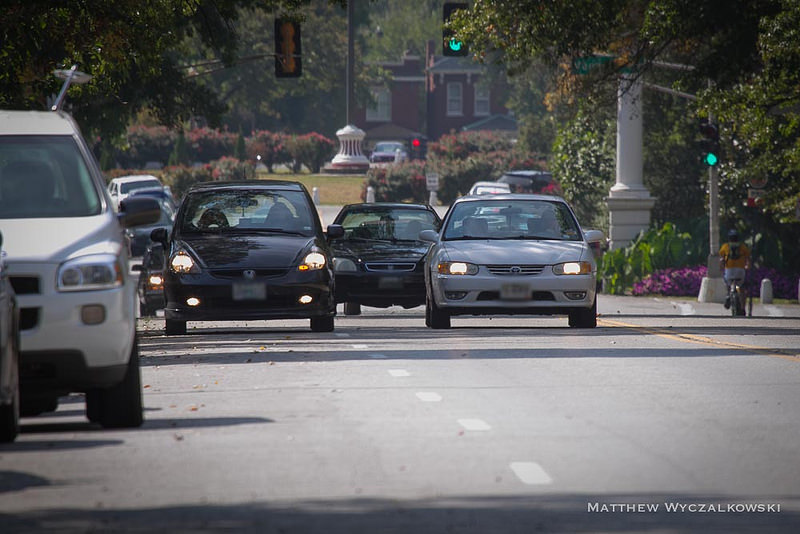 {bicycle hazards on Tower Grove Avenue – In heavy traffic cars will sometimes drive on the right. Such aggressive driving is intimidating and dangerous, particularly near parked cars.} 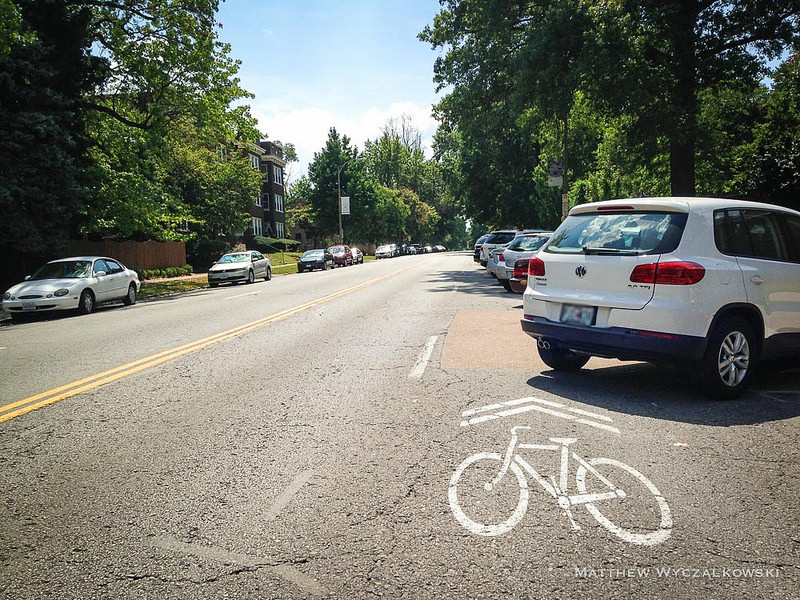 {bicycle hazards on Tower Grove Avenue. Cars pull in diagonally in the southbound lane of Tower Grove Avenue to park for occasional Botanical Gardens events. As they back out, drivers don’t see cyclists until they’ve fully blocked their path, creating a real hazard for all cyclists.}

The aging South Kingshighway Viaduct was built in 1936 and is crumbling. The city has plans to replace it, with construction scheduled to start in the Fall of 2014. Kingshighway will close for a year and a half as a new bridge is built, and during this time traffic will divert to alternative routes. The heaviest traffic will flow to nearby arterials, but car volume will increase significantly along Tower Grove Avenue along its entire stretch. What impact this will have on cyclists will depend on what bicycle infrastructure is in place. 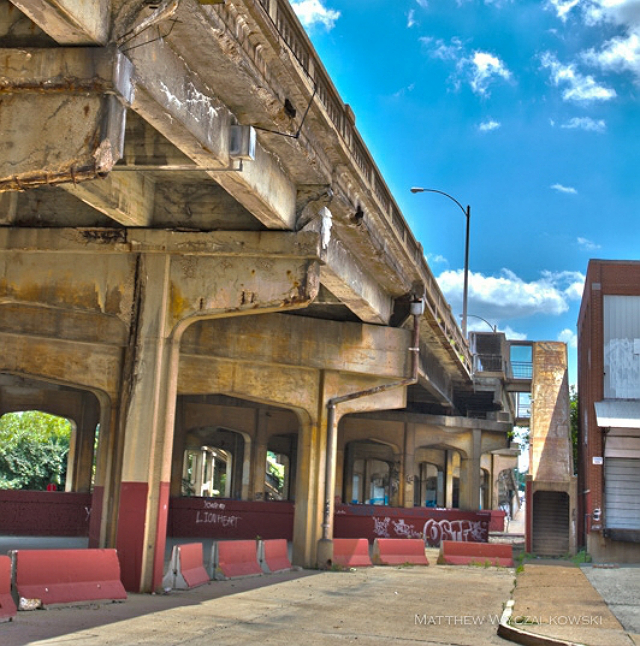 {Kingshighway is closing – The Kingshighway Viaduct between Vandeventer and Shaw is in poor shape and will be torn down sometime around Fall 2014.}

The good news is that Tower Grove Avenue is slated to get buffered bike lanes as part of the Bike St. Louis Phase 3 project (PDF). Buffered bike lanes are an improvement over the standard bike lane, with a three-foot-wide buffer between the bike lane and parked cars, as well as a single driving lane (see photo below). They are safer for cyclists than regular lanes, and the new buffered lanes on Arsenal have been getting rave reviews. If the installation goes according to schedule, Tower Grove Avenue will be striped for such lanes this fall.

Buffered bike lanes aren’t great just for cyclists, but are also a real benefit to the residents of the neighborhoods around Tower Grove Avenue. Because they limit car traffic to only one lane, they calm traffic and reduce noise and pollution. A single driving lane on Tower Grove Avenue would encourage drivers from distant neighborhoods to stay on the designated detours, which are arterial roads like Grand and Hampton that are designed to handle such traffic. 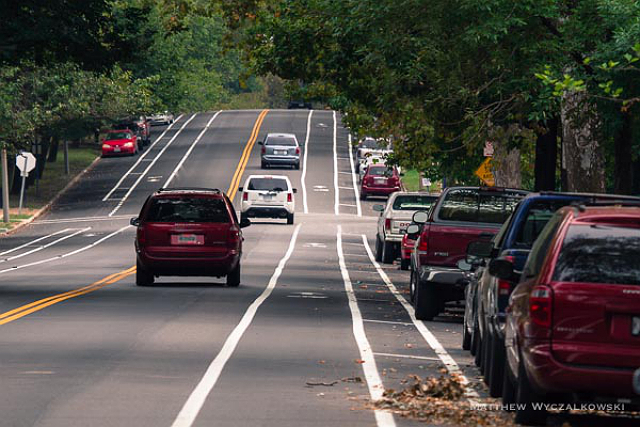 {Buffered bike lanes along Arsenal are the solution. The road has been restriped with a 7′ parking lane, 3′ buffer, 5′ bike lane, and 10′ travel lane. The exact same arrangement has been proposed for Tower Grove Avenue between Magnolia and Vandeventer as part of the Bike St. Louis Phase 3 project. However, traffic engineers instead want to remove parking and send two lanes of cars each way on Tower Grove Avenue while Kingshighway is closed.}

Yet this scenario is in doubt. We’ve recently learned that traffic engineers are insisting on opening up two lanes for cars in each direction along Tower Grove Avenue to maximize the volume of traffic which can flow through it. They are looking to get rid of on-street parking and to delay any bike infrastructure projects until after the Kingshighway bridge is complete in Fall 2016 or later. We have heard from people closely involved in the project that Phase 3 buffered bike lanes are on hold indefinitely on Tower Grove Avenue. 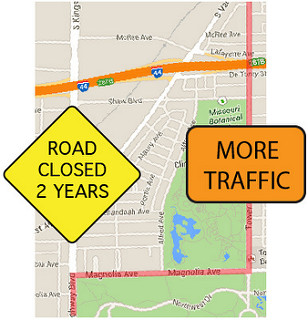 If the buffered bike lanes are scuttled and two driving lanes go in, Tower Grove Avenue will become unrecognizable, an entirely different place to ride, walk, and live near. The wide open lanes will encourage fast driving and invite more cars to detour through this route. Rather than ease traffic, two lanes will encourage more of it – this is induced demand, which guarantees that if you build it, they will come. As a result, Tower Grove Avenue between Magnolia and Shaw will look a lot more like Kingshighway, a loud river of cars which is scary to ride and a real burden to cross. Worse still, since Tower Grove Avenue narrows to one lane heading north to the I-64 interchange, at peak traffic both lanes will become parking lots as two lanes try to funnel into one. Creating two lanes for just a short stretch of a road will create congestion but won’t improve the flow of traffic.

The evolving plans for Tower Grove Avenue illustrate in a nutshell how driver convenience is reflexively prioritized over cyclist safety. Yet it is not just cyclists harmed by this approach: the entire neighborhood will suffer from the noise and exhaust of traffic, and pedestrians will have a much harder time crossing. Up the road, the developing Cortex District has committed itself to the idea that being more accessible to cyclists and pedestrians is critical to being competitive on the national and international stage. Delaying bike lanes to speed traffic subverts all of this. 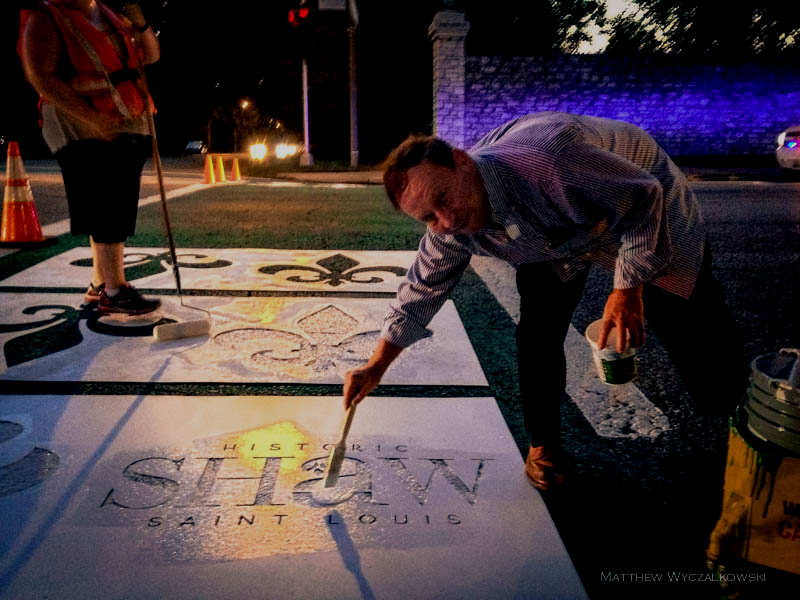 {Your voice counts. Public officials are sensitive to the concerns of their constituents, particularly during an election year. Here, Alderman Conway demonstrates his commitment to pedestrian safety by helping to paint decorative crosswalks on Tower Grove Avenue at Magnolia.}

Buffered bike lanes are the only way to keep Tower Grove Avenue the jewel of a road that it is today. They will keep things essentially the way they are now: a single lane used mostly by drivers from nearby neighborhoods at reasonable speeds, on-street parallel parking on both sides for residents as well as Garden visitors, and a safe and convenient corridor for cyclists of all ages and abilities.

A road diet and buffered bike lanes on Tower Grove Avenue from Magnolia to Shaw are part of Phase III of Bike St. Louis and all partners are committed to executing that plan, available at http://bit.ly/BikeSTLPhaseIII. When the Kingshighway bridge construction begins in early 2015, a couple things will happen:

1) There will be a temporary bikeable route between Magnolia and Shaw on Tower Grove Ave;

2) Traffic levels will be monitored to see how patterns are emerging to ensure that there are appropriate alternatives for all modes of transportation;

3) Alternate routes for cyclists will include creating a biking and walking-friendly renovation of the Thurman Underpass.

We will install the full Phase III Bike St. Louis improvements along Tower Grove Ave as quickly as possible after monitoring how the closure is affecting all forms of traffic. We look forward to implementing this project and many more to make City of St. Louis streets better for bicycles!

In short, the current plan is that no new bicycle facilities will be placed on Tower Grove Avenue before the start of construction, and after that the City will conduct traffic studies. The Thurman Underpass will create a partial detour for cyclists, allowing them to ride on a residential street 1/3 mile west of Tower Grove Avenue.

The City’s approach seems to be to let cyclists fend for themselves during the Kingshighway construction, and the response leaves many critical details unanswered. In thinking about cyclist safety along that route, a number of concerns come to mind. Specifically, we’d like to know:

Other obstacles remain. The cobblestone “rumble strips” at stop signs on Thurman are uncomfortable and potentially dangerous to cyclists. Connectivity to the south through Tower Grove Park is remarkably poor: for instance, riding from Roger to Thurman through the park – a direct north/south connection – requires cyclists to share narrow paths with pedestrians and to dismount to cross curbs several times. Simply opening up the Thurman underpass with no consideration of broader connectivity will do little to make it a viable alternative to Tower Grove Avenue.

Overall, the plans outlined in the City’s reply are consistent with our impression that the primary goal behind the delay of Phase III implementation is to maximize the flow of traffic along Tower Grove Avenue when Kingshighway is closed. No commitments are being made to bicycle infrastructure along Tower Grove Avenue during the closure, and the buffered bike lanes which were to be implemented this fall are on hold.

We appreciate there are no easy solutions here, and that there are conflicting demands for limited road space. But priorities drive decisions which have consequences: more car lanes will attract more cars, and without bike infrastructure more traffic and higher speeds will make cycling more dangerous and less appealing. Adding bike lanes, on the other hand, will make the route more attractive and increase the number of cyclists. Hard choices provide moments of clarity. Installing buffered bike lanes on Tower Grove Avenue before Kingshighway closes will be an excellent opportunity for the City to demonstrate vision, leadership, and commitment to cyclist safety.

SafeTGA is maintained by Matthew Wyczalkowski, who has been commuting along Tower Grove Avenue daily for ten years. After receiving his PhD in Biomedical Engineering from Washington University, Matt chose to stay in St. Louis in part for its quality of life. Matt is now a scientist at The Genome Institute studying cancer genomics, and SafeTGA is a reflection of his passion to help make St. Louis a world class city to work and live. Contact Matt at SafeTGA at gmail dot com