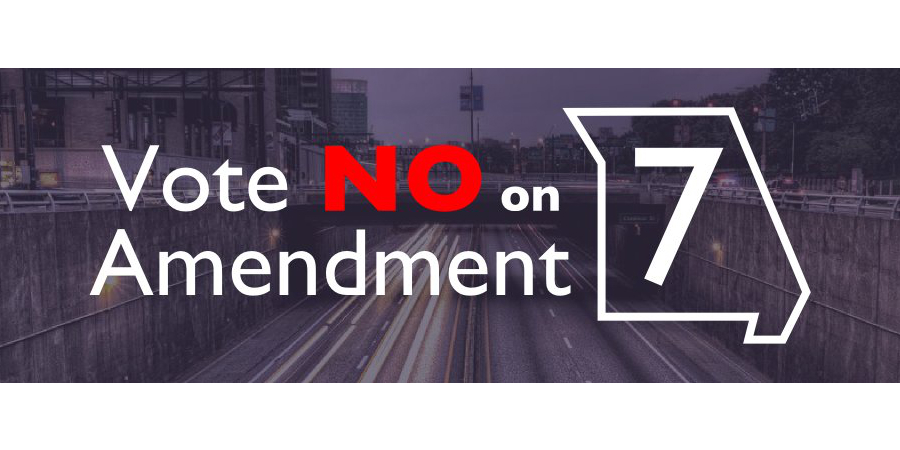 It’s not easy to distill all that is wrong with Amendment 7 into one short, readable item. A lot of good pieces have been written about why one should vote “no” on August 5 (some links below), and there’s likely nothing novel here. The larger issues at play deserve significant attention, and while risking oversimplification, I’ll try to explain why this amendment to the state’s constitution is a bad idea.

Some context: The core of the St. Louis region, the City of St. Louis, St. Louis County, and St. Charles County, together, have seen an increase in population of 1% over the past 45 years. In the St. Louis region, vehicle miles travelled is now less than it was in 1996. The number of registered vehicles in Missouri is declining. Today, Kansas City and St. Louis rank first and second of all urbanized areas in the nation in most freeway lanes per capita. The Missouri State Legislature this year passed a $620M per year tax cut that will benefit our state’s wealthiest residents.

This should be enough to illustrate that increasing the state sales tax to generate $480M per year to spend overwhelmingly on roads and highways is a bad idea. Population growth is going to remain stagnant. The forces that once pushed the increase in miles driven (women joining the workforce for the first time, Baby Boomers shuttling kids) have ebbed. The state is wealthy enough to offer massive tax breaks.

Before going any further, here is Amendment 7 as it will appear of the August 5 ballot:

“Should the Missouri Constitution be changed to enact a temporary sales tax of three-quarters of one percent to be used solely to fund state and local highways, roads, bridges and transportation projects for ten years, with priority given to repairing unsafe roads and bridges?

This change is expected to produce $480 million annually to the state’s Transportation Safety and Job Creation Fund and $54 million for local governments. Increases in the gas tax will be prohibited. This revenue shall only be used for transportation purposes and cannot be diverted for other uses.”

There are problems here of course. What does “priority given to repairing unsafe roads and bridges” mean? Nothing, really. It’s politically calculated to win votes. The “Safety and Job Creation Fund”? Well gosh, that’s sounds good, right? Language like this isn’t honest and does not help voters make an informed decision. It shouldn’t be allowed.

Since 2005, 8,742 people have died on Missouri roads. The number once cause of death for children is a vehicle collision. Remember this when you hear that your road or highway is being “improved” or being made safer. The very simple, very easy, only effective way to make driving safer is to do less of it. No one can design a road that prevents distracted driving, speeding, and drunk driving, the causes of most fatal collisions. The less we drive, the more alternatives people have, the fewer people will die.

If you get past the false premise of needing more and bigger, and safer highways and political-speak of the ballot language itself, there are plenty of reasons to still vote “no”. The sales tax would be high, higher than Chicago and New York, and above 12% in some places. It’s an unfair tax, putting a larger burden on the poorest residents. It’s the wrong tax, as it would allow truck traffic to pass through the state without paying for the roads they use. Amendment 7 also forbids increasing the state gas tax or tolling highways for a decade. The “temporary” tax is also likely to stick around, as a new “crisis” will arise when the new revenue is set to expire.

Sales tax revenue is often used to fund local development initiatives, whether it be a transit tax (like in St. Louis City and County), tax increment financing (TIF), or community improvement districts (CIDs). Increasing the sales tax for other purposes erodes the ability of neighborhoods and communities to fund locally supported initiatives.

Perhaps most confusingly, some supporters of Amendment 7 praise it as a way to finally turn on the state funding spigot for transportation. All state residents pay taxes for projects and services across Missouri that ostensibly benefit us all. But this is a new tax that returns less than we pay, is spent on projects that undermine our region’s urban areas, and overwhelm the small amount allocated to anything other than cars and trucks on highways. If Amendment 7 passes, too many here will be patting themselves on the back, while MoDOT, road builders, and trucking companies laugh all the way to the bank.

Sadly, the local transit advocacy group Citizens for Modern Transit bought this reasoning whole. “For the first time in Missouri’s history, there is a proposed State constitutional amendment which will provide dedicated state funding for public transit.,” read a CMT flyer. The cognitive dissonance is jarring. Again, laundering local tax funds through Jefferson City and MoDOT only reinforces bad transportation planning, skimming millions of dollars off the top of what could be spent locally.

Roughly 5% of funds allocated to the St. Louis region would be spent on public transportation projects. That’s absurd, but the number is likely much worse. The largest allocations would require significant local and/or federal matching funds to be built. The $18M for West Florissant/Natural Bridge BRT requires at least $20M more of our tax dollars from Metro. The $25M for the St. Louis streetcar requires $271.5M in additional federal and local funds. And what if matching funds aren’t found? The projects do not get built. If you’re wondering, the $350M to “improve I-270” carries no such requirement, nor do any of the other highway projects.

At the root of Amendment 7 is a failure of political leadership. Are there transportation priorities that St. Louis City and County are committed to achieving (here’s where it would be nice to have an cohesive plan)? If so, regional political leaders should bring a plan to voters. They should explain why the projects are needed, who they benefit, and who pays. Instead, we were caught off guard, and were forced to assemble independent project lists in just weeks. Amendment 7 didn’t come from us, nor our political leaders.

The proof that the MoDOT approved list is a hodgepodge of what various politicians calculated would garner the most votes doesn’t require a secret memo or insider information. There is no citywide, countywide, or regional transportation plan. When Governor Nixon placed the question on the August 5 ballot, supporters, and MoDOT scrambled, ultimately tasking county executives (St. Louis City is its own county), with producing project lists.

The belief by sales tax proponents was that voters would be more likely to hand over $6B if they knew more specifically how it would be spent. A list would also effectively move the conversation from where I started here – what kind of transportation investments, and funding mechanisms make sense – to a debate over how good or bad the list might be. This may be seen as politically smart, and even admired, by some who care more about political scores than a better future for Missouri residents.

We’re nearly having a real conversation about our transportation future in St. Louis (at least in some quarters). Voting “no” on Amendment 7 continues this conversation. Voting “yes” ends the conversation for a decade. The inertia of a state constitutional amendment, and tax increase, likely means the conversation’s over for longer.

Voting “no” means that we will have to at least consider an effort to raise the state’s gas tax. A $0.13 per gallon increase would raise between $4-5B over 10 years. The gas tax could be raised by a smaller amount and then we can discuss where $3B or $2B in additional funding can be found. Sometimes voters can imprint political courage through defeat.

To bring this back to a very basic question, who can argue highway spending in the St. Louis area has led to safety or economic prosperity? That’s what proponents of Amendment 7 want you to believe, that past highway spending has led to increasing safety and prosperity, or alternatively (if one can admit that the St. Louis region hasn’t prospered over the past 50 years as it could), that the only thing separating us from safety and prosperity is a few more highway lanes. We know better.

Streetsblog: Will Missouri Voters Go Along With the Highway Lobby’s Money Grab?

Scott Ogilvie on nextSTL: Vote No On Amendment 7 – August 5th