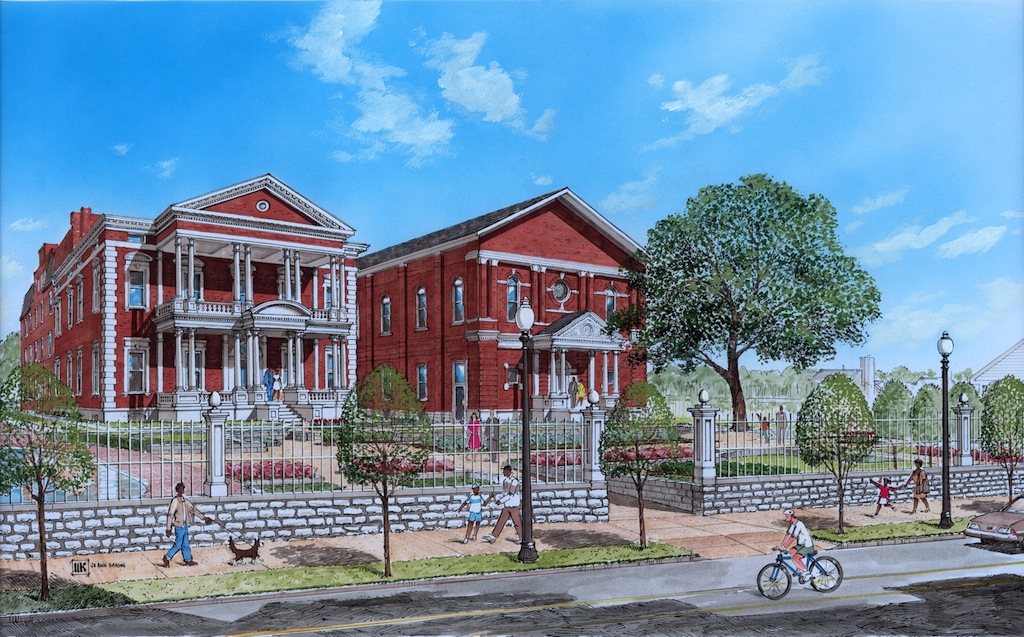 Convincing people that a historic building should be conserved requires demonstrating how it meets the needs of today. If one can show how a historic building meets contemporary demands, that is even better. Preservationists often fail to grasp these simple public relations tenets, and instead resort to unsuccessful and righteous rhetoric rooted in their own understanding of the places they admire but others may not understand.

I started out as a young flag-waving preservationist, attending public meetings armed with facts, analysis of obscure architects’ careers and other rhetorical points that stirred no one’s blood and rarely changed the outcome of battles. Like many activists, I felt that the truth should be self-evident – so I concentrated on the purity of that truth.

Eventually I rejected the habitual advocacy pattern, and started listening. While conducting an architectural survey of the Ville neighborhood, I was amazed at how many people I met who told me that buildings I saw as too far gone to be saved were assets in their eyes. Yet people weren’t telling me about architectural style, or National Register of Historic Places criteria, or how important the builders were.

“They don’t build buildings like this anymore,” someone told me on the street. “Once they are gone, my neighborhood is gone.”

Turns out that a lot of people want to conserve buildings in St. Louis. Yet these people were not constituents of preservation organizations, because they didn’t understand the language and tone of the message. Residents of neighborhoods see themselves in buildings, not dead landowners or architects. People are amazed by the plain honest beauty of vernacular masonry, and the rugged utility of common buildings. The details are present, but they aren’t the point to everyone.

Thankfully some local preservationists are forging new paths in architectural storytelling by doing more showing and less telling. When the St. Louis County Library announced that it might demolish Frederick Dunn’s Lewis and Clark Branch Library (1963), many pointed out the building’s architectural significance, the artistic accomplishment of artist Robert Harmon’s stained glass windows and the plain wastefulness of demolition. The County Library’s position did not bend.

Then, earlier this year, preservation group Modern STL unveiled a rendering and site plan showing that preservation of Dunn’s modern masterpiece could coexist with the exact program details of the County Library’s facilities plan. Modern STL’s volunteer architects, Neil Chace, Jon Hagar and Jeremy Claggett, created a concept that melds concerns of people who understand Frederick Dunn’s genius with those of people who want their children to have access to good computers and books.

Modern STL’s plan is pragmatic, elegant and sophisticated. Most important, however, is that it is delivered in the form of a compelling image. Preservationists easily forget that they are architectural advocates, and that the language of architecture is visual. Solutions for buildings germinate in plain language, but they take flight in clear images.

One reason that the public has been so skeptical of the veracity of Paul J. McKee’s claims for his massive Northside Regeneration has been the lack of imagery. McKee’s presentations include lots of images in an ever-growing PowerPoint presentation, but the abstract renderings are tangled in a mess of words and concepts that borrow heavily from urban planning theory.

In short, McKee really can’t show us what Northside Regeneration will look like. Sitting through one of his presentations, one is inundated with pop history, statistics, cubic forms, theory buzzwords and a whole slew of things that hammer flat any of the dramatic vision he purports to be selling. At the end of the last presentation that I attended, I just wanted him to show us one thing that would grab our hearts – our minds were stuffed silly.

Yet McKee did indeed produce one very compelling image: a colorful rendering of the James Clemens, Jr. House complex as it would appear fully restored, released by the developer in 2010. McKee’s rendering has been the single best image in making the case for rescuing the forlorn complex, which includes an antebellum Palladian mansion (1860), dormitory wing (1887) and badly-compromised Georgian Revival chapel (1896). McKee’s projected residential conversion fell through, and his subsequent neglect of the complex is worrying. Yet the developer crafted a hopeful visual narrative that preservationists failed to do over decades of advocacy.

While the Clemens House’s fate is uncertain, the equally-endangered Castle Ballroom (1908) on Olive Street is already passing into the ether. After a collapse on the west wall of the building this winter, the Building Commissioner issued an emergency condemnation. In February, the owners received an emergency demolition permit exempt from review that may have protected the National Register of Historic Places-listed building. This week demolition is underway, and the building’s roof timbers are stacked on the street awaiting resale.

Surprisingly, the Castle generated debate even after the collapse. The emotional appeal of the building’s beautiful brickwork and cultural history spread wide enough to capture many hearts and minds. Yet rear-guard chatter about saving the Castle diffused, reminding preservationists that for the last three years no one has ever created a future-focused image of what the building could be. The owners placed the building for sale, and to their credit conducted tours and created a website emphasizing the building’s past.

However, during the time the building was for sale, the only sign of the building was a small, plain sign stating that the “Historic Castle Ballroom” was for sale. That sign did nothing to explain why the building mattered to anyone alive today, nor did it convey any sense of possibility. A big banner showing a restored Castle surrounded by people, with a few quick facts about its musical heritage, may have inspired more interest.

The Castle Ballroom’s tenuous state has mirrored that of the historic Palladium (1913) on Delmar and Enright. The Palladium, home of the significant Club Plantation, poses a difficult case. Its historic brick exterior has been covered under stucco that evokes the word “slathered,” and its grand entrance is occluded by ugly corrugated metal. The entrance to Club Plantation was on the back side, best known to most as the entrance to a thrift store.

The Palladium faced a direct threat in the last few years when the Veterans’ Administration (VA) eyed it for possible expansion of the Cochran Veterans Hospital to the north. In November 2013, the State Historic Preservation Office determined that the Palladium was eligible for listing in the National Register of Historic Places as part of its official review of the proposed demolition (known as a “Section 106” review after the part of the National Historic Preservation Act that governs the use of federal funds).

Furthermore, the National Historic Preservation Act prohibits federal agencies from purchasing National Register-eligible properties for demolition, so the VA faces a difficult process if it were to pursue the Palladium. With Sweetie Pie’s Upper Crust going strong next door, the VA likely won’t move ahead with this block — saving the Palladium from one threat but leaving it open to continued neglect.

The Palladium’s link to African-American musical heritage and its potential to offer Grand Center a genuine cultural landmark rooted in the city’s deep history are difficult to show. Photographs of the Palladium as it is don’t speak to the imagination, but the grim and discouraging realities. Again, the power of the image comes into play. Architect Christina Claggett created a view of a revitalized Palladium, showed illuminating Grand Center in the din of a busy night. This conjures a Palladium that is inviting and joyful – the sort of place people can see themselves going for a drink or a show.

Preservationists often are the only voices that remind people that history does not stop, and that the 1960s bank tucked in a 19th century commercial district represents an era of history as vital as any that came before it. We need to take this further, and recognize that the events and lives today are also part of history – the part that makes the decisions about stewardship of challenging buildings like the Palladium and the Clemens House.

Visual narratives engage wider audiences, spark the imagination, and transcend the complexities of historic fact. Great images show people a shared future, and how great buildings are vehicles for all of us. Preservation needs to be a dreaming together, and thus its narrative needs to be accessible, visual and powerfully visionary – like the great buildings we want to carry into the future.