The Belleville News Democrat (note the picture is of an Acela engine which won’t be running here) reports that St. Clair County is considering chipping in $500,000 for an Amtrak station in East St. Louis. There is no estimate of the total cost of a new station. For reference the new station in Alton could cost up to $20M. The East St. Louis station would be a wasteful make-work project.

“We are the only county with MetroLink (in Illinois) so that will allow … all the communities in St. Clair County to be attached to high speed rail,” said (St. Claire County Board Chairman) Mark Kern. You already are connected!

The proposed station’s site at Riverpark Dr. isn’t close enough to either the East Riverfront MetroLink station (3,000ft) nor the 5th and Missouri station (2,100ft) to serve a practical connection. Whereas the downtown City of St. Louis Amtrak station is adjacent to the Civic Center MetroLink station. East side patrons already have easy MetroLink access to Amtrak.

“If you have to travel to St. Louis, you will be leaving your home to cross the bridge to get on a train that will then backtrack just where you were. Then when you are coming back, the train will pass your home on its way to St. Louis.” – Mark Kern. Not really, the Amtrak route through St. Clair County is less than 4 miles long. It’s only a couple miles further for a driver to get to the St. Louis station, made all that easier with the Stan Musial Veterans Memorial Bridge.

A better place for an additional station on the STL-CHI route, which I wager would have much more bang for the buck, would be at I-270. With easy access from the highway and a big parking lot, it would attract riders from both north St. Louis County and Madison County. 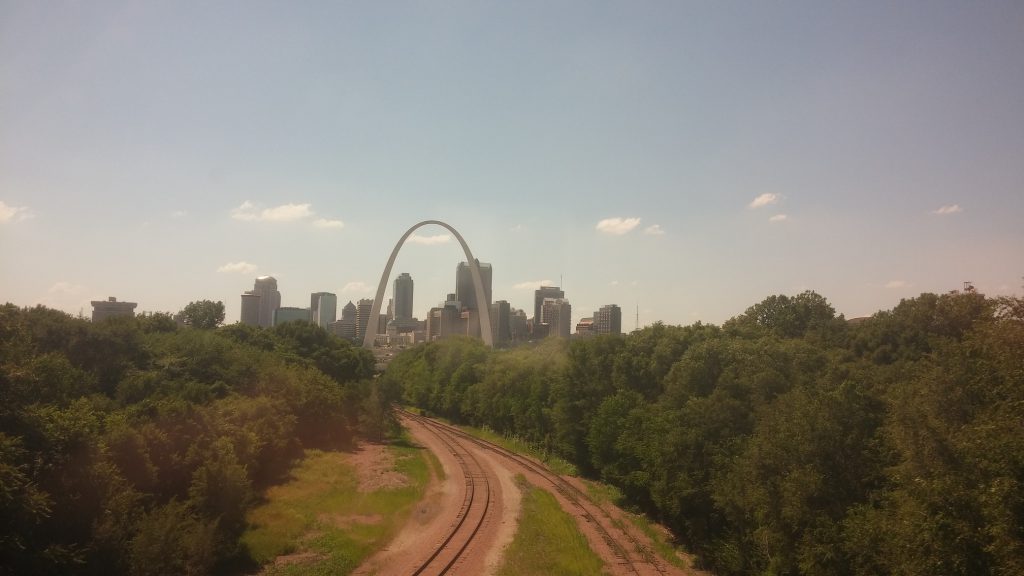 {Passengers enjoy a great view of Downtown St. Louis from the Approach to the MacArthur Bridge.}

St. Clair County already has an Amtrak station; it’s in downtown St. Louis made easily accessible by MetroLink and the numerous toll-free bridges. When there are greater needs elsewhere (including those beyond transportation) with greater payoffs, this would become yet another example of misplaced infrastructure spending.