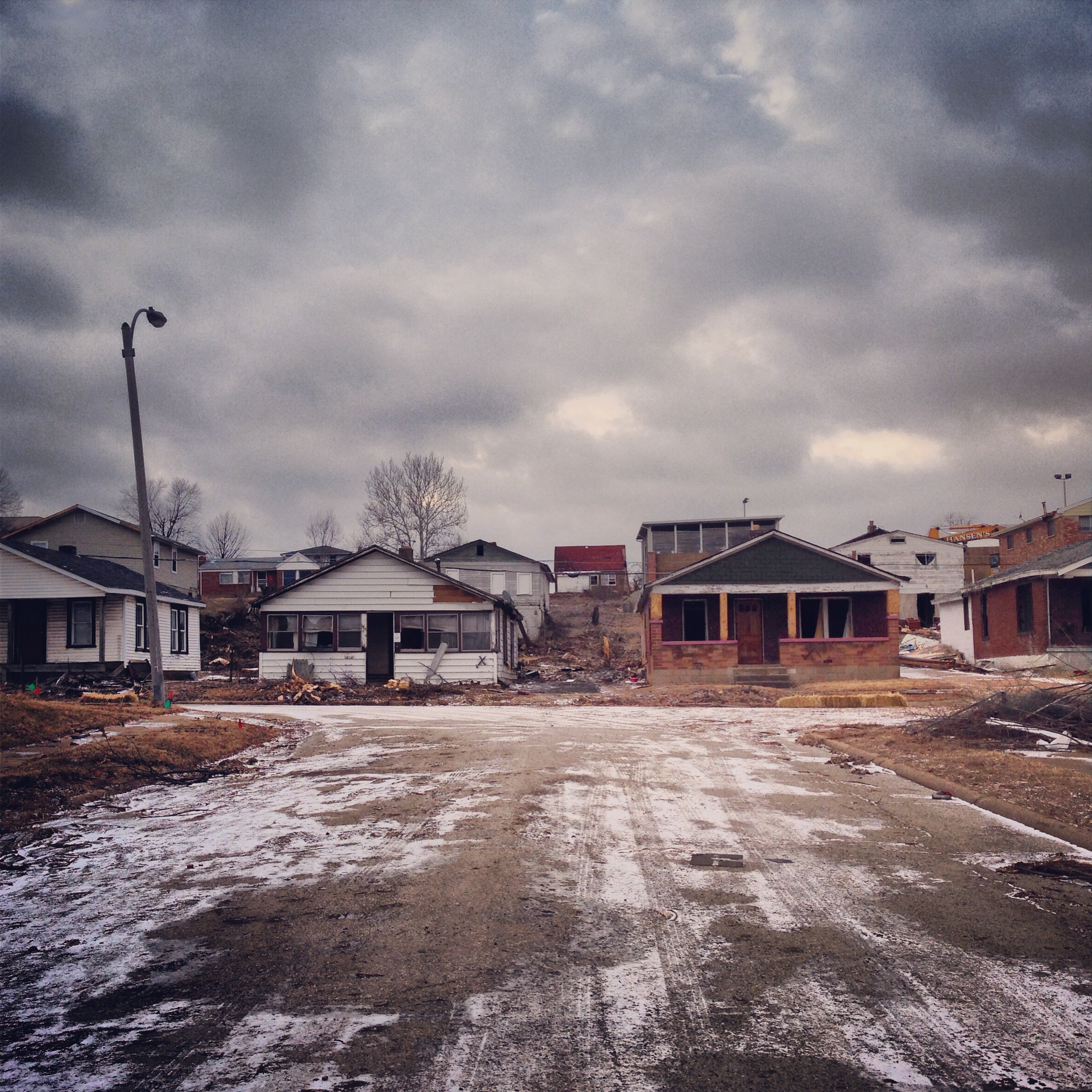 There’s something different about a home being demolished. It’s an emotional experience to see a place where a family has celebrated holidays and birthdays, a place where children have been welcomed into the world, and eventually thrust back into it, pulled apart. It’s a unique voyeurism to peer in at wallpaper, or a bedroom door of a half-gone home. One cannot help but feel that more than brick and mortar are being destroyed.

This is true of a solid home in Clayton being sacrificed for new infill three times the size and price tag. It’s true of the many vacant shells that fall in the City of St. Louis each year. Both are commonplace to the point of being unremarkable. It’s altogether different when it’s not one home, but an entire neighborhood, a community, being erased.

It’s different, even in St. Louis where demolition is omnipresent. Warehouses, office buildings, churches, hospitals and storefronts being dismantled or simply crumbling, are part of urban life. We become desensitized by this incessant slog. But then sometimes something is different.

That different feeling is what one experiences seeing the last days of a small corner of Richmond Heights. Hadley Township isn’t an historic name, but rather one residents used for their nascent neighborhood association nearly 15 years ago now. That group sought to stabilize the neighborhood, and asked the city for help.

Housing in the neighborhood dates back as far as 1907, and the area was first a company town for Evans & Howard Firebrick Company. Most of the residents were African-Americans who had migrated north for jobs. For many years it was the only place black residents could rent or buy a home outside the City of St. Louis limits. Family histories spanned generations here.

So residents asked for help. Richmond Heights issued two requests for proposals (RFPs) asking for residential infill development. They received exactly zero proposals. But no matter, word was out, and investors were buying homes. With the redevelopment buzzard circling, some residents asked the city to help find a redevelopment plan even if it meant selling their homes.

In the end, just more than 100 properties were purchased. Along the way there were developers and more developers, plans and more plans. Hotels, high-end residential and office space, a Major League Soccer stadium, and then big box retail. If it weren’t for a holdout, or two, Richmond Heights would be home Missouri’s only IKEA. That store would eventually land in the City of St. Louis.

Before abandoning its redevelopment plan, Pace Properties had offered homeowners living in the area $50,000 plus 2.4 times the appraised home value as determined by St. Louis County. The minimum buyout offer was $190,000, according to Pace. Buyout numbers for the Menards site have not been made public.

Pace and the IKEA may be gone, but developers can and will continue to pursue development in the area, they simply will not have the explicit assistance of the city in doing so. The remaining homes are now more isolated than ever, and will remain targets for redevelopment.

The Menards development is rushing forward. In September last year a $15M Tax Increment Financing subsidy was approved. The money will be used to purchase and demolish homes, then build infrastructure for the 246,000sf store.

The development area was blighted in 2006, and for a second time in 2013. If you’re not familiar, blighting studies are demolition-enabling stamps of approval. At a basic level, a blighted property is one that is “failing to contribute to the economic and fiscal well being of the City”. Maybe the layman’s term is “eyesore”, as it is a relative judgement.

By 2013, the blighting study found 30 of 74 single family homes, and two three-family buildings vacant. Nearly 76% of the buildings in the Area were constructed prior to 1963. The area was “obsolete”: Nearly 48% of all parcels in the Area are either vacant (primarily due to demolitions of dilapidated buildings) or contain vacant buildings, and are therefore no longer supporting viable development. The obsolete infrastructure was determined to not support “modern residential or commercial development.”

The several dead-end streets were determined to be dangerous because emergency vehicles would have a difficult time turning around. Missing or neglected sidewalks inhibited pedestrian circulation and weren’t in compliance with the Americans with Disabilities Act. The parcels are too small to meet current zoning standards (which require larger homes on larger lots).

Ultimately, though, no one cares about that stuff, it’s just part of the blighting pro forma. After all, those shortcomings are about to be replaced with a dehumanizing box. The problem was the area had become an “economic liability”, it was “underutilized”, “a burden on the city.” It was practically unbecoming of a municipality such as Richmond Heights.

I enjoy the analytic argument. If running a city were strictly a bottom line game, a constant play for more sales tax revenue, it would be easy to understand why this neighborhood is now gone. And maybe that’s in fact what it is, but it shouldn’t be. Our values, as codified in financial incentives, are badly distorted.

Richmond Heights will reap tax revenue, and well in excess of the TIF. But the Big Lie is that everyone wins. The accepted cost-benefit analysis shows “regional parks and trails” getting $651,782 from new tax revenue over 25 years. The Children’s Service Fund will reap $3.35M, and regional transit rakes in a whopping $6.7M! These are all $0 today. The lie is that a new big box will magically increase total regional spending on housewares. It won’t.

This story isn’t exactly a parallel to the City of St. Louis riverfront, the city’s Mill Creek Valley, Pruitt-Igoe, the Interstate highways, or Carrollton. Richmond Heights sorta gave residential infill a try, but the arc of suburban development bends toward retail. Short of willfully dedicating itself first and foremost to housing preservation, the municipality’s options all funneled to this outcome.

I hear, and understand, those saying “glad it’s over”, “thank goodness the blight is gone”, and “goodbye eyesore”. Residents and passersby alike are fatigued, and the outcome has been little in doubt for years. Throughout the developers and plans, the inevitability remained. But beyond rationalizing the process lies something more. The images here can suggest it, but if you get a chance, visit before the physical remnants of a community are extinguished for good. 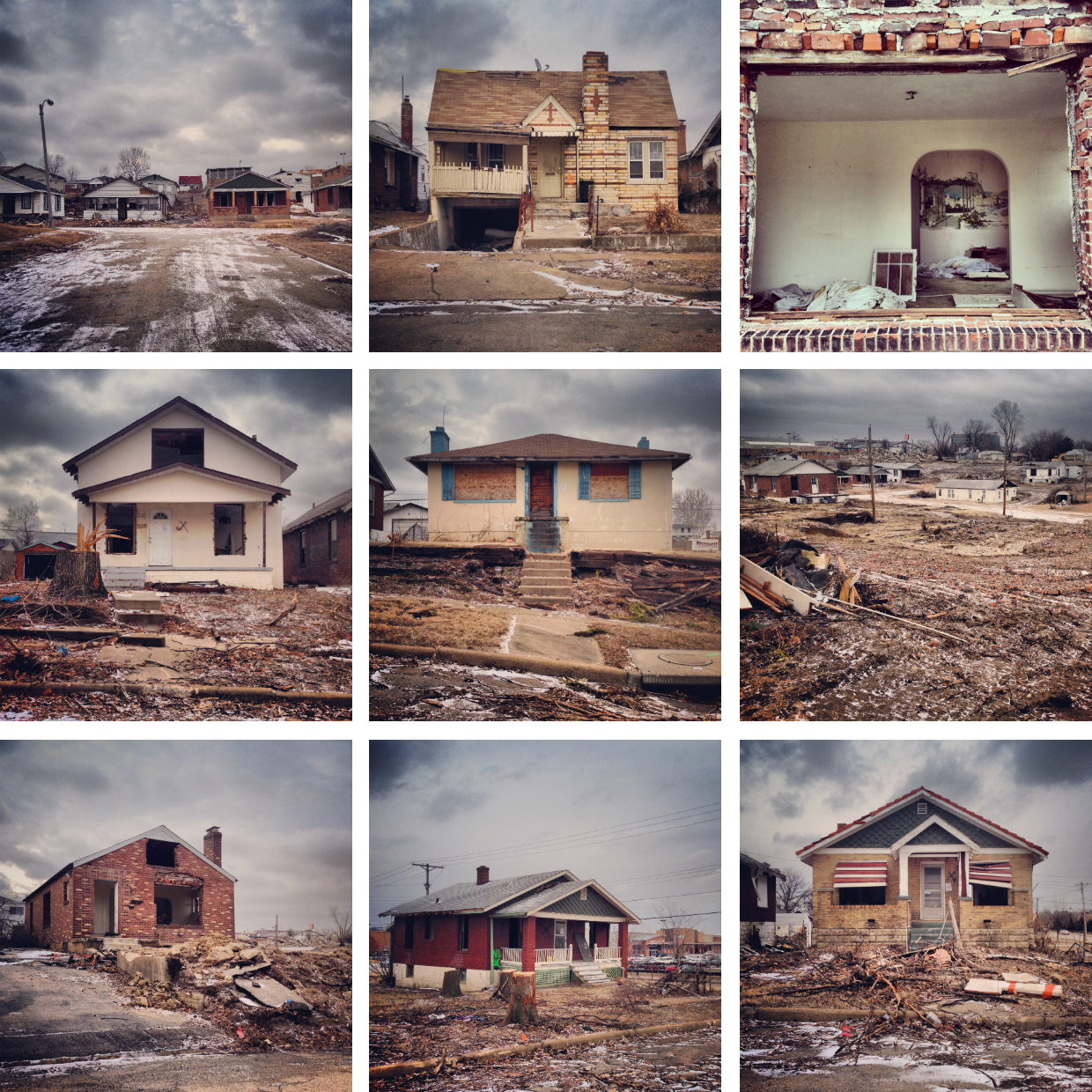 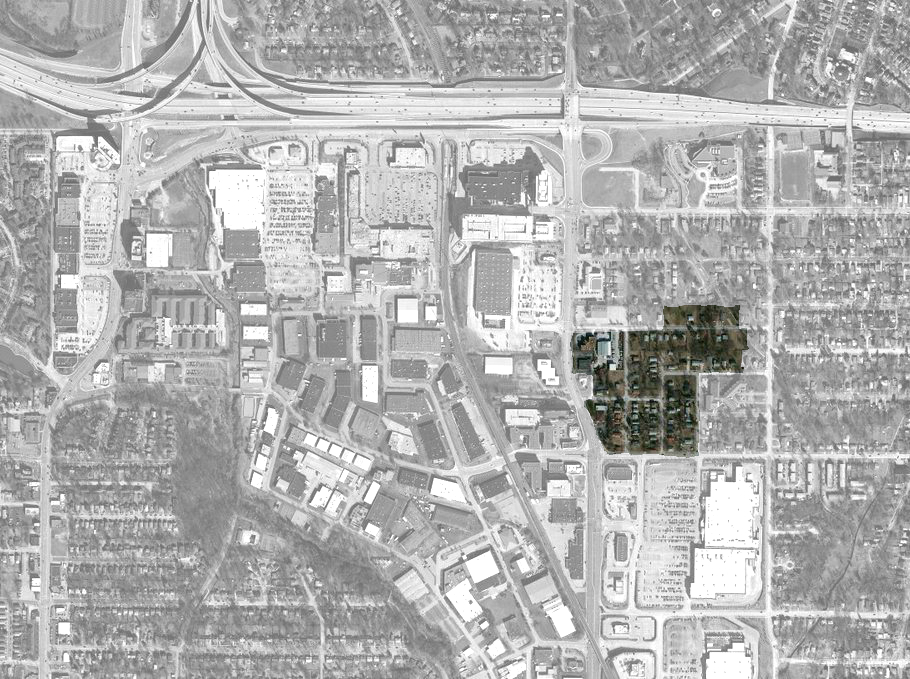