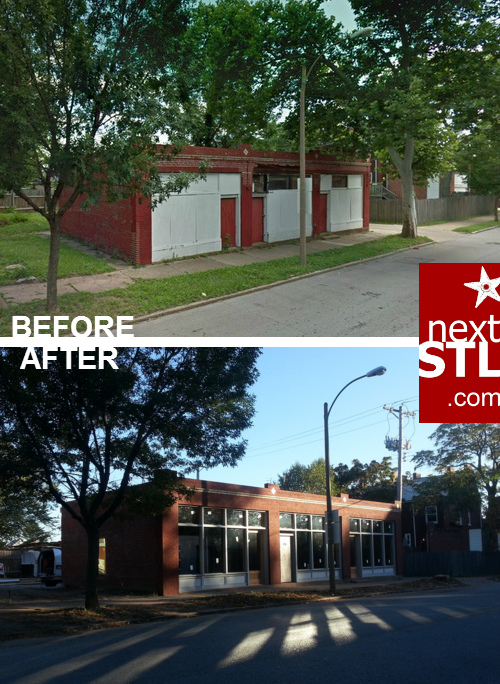 This image was posted on the nextSTL Facebook page yesterday with the just the title of this blog post added. There were a few comments, a couple “Likes” and finally the basic question, “Why is this building the most important to save?” Here’s my response:

The most important building to save is the one no one would have missed because these are the buildings that make our city, they’re the ones that tie together two lots, two streets, two neighborhoods. The anonymous little buildings are the fabric of the city. If they’re gone, we may be left with nothing but landmarks, like little museum pieces on islands, surrounded by vacant lots, big side yards and cheap infill. People visit landmarks and admire mansions and ornate cathedrals, but the best cities, the livable cities are great because they have many individually unmemorable buildings that create something more, that create a city.

When I think of the cities I love to visit and explore, really think about the experience, it’s not the landmarks that make me want to travel there, it’s the city’s fabric, those places I can’t quite remember, the ones I didn’t take pictures of. New Orleans, Boston, San Francisco…we can name the landmarks, but St. Louis has those (the Arch, Old Courthouse, New Cathedral, Botanical Garden, Forest Park, etc.), what we don’t have is the in between stuff, the filler, the fabric. Walking from the downtown convention center to Soulard Market is nearly the same distance as walking from Capitol Hill to the White House in Washington D.C., yet they’re far from the same experience.

This is important and timely in part because Mayor Slay has just rolled out the idea to create a new city fund to mothball buildings for preservation. This is a great step forward for the city. Funded by a new fee on all electrical, plumbing and mechanical permits of $4 per $1,000 in permitted work, it would amount to an estimated $500,000 per year in stabilization work. Better yet, a seven member commission would be appointed to consider which buildings receive funds. A lien would be incurred for any work on a building with a private owner. There are more details, and they basically make sense.

There are a couple challenges that should be discussed. To receive funds, a building must be listed on the National Register of Historic Places or be in a Local Historic District. That criteria would include roughly one-fourth of the city’s structures. And an equal amount of funds (~$500,000 per year) would be added to what the city already allots for demolition. There would be no commission evaluating demolition. And it’s unclear at this point whether any demolition funds would be used in Local Historic Districts or for buildings listed on the National Register. The city certainly has a long list of buildings that are likely in need of demolition, but that list isn’t readily available. However, we expect it to be part of the conversation soon.